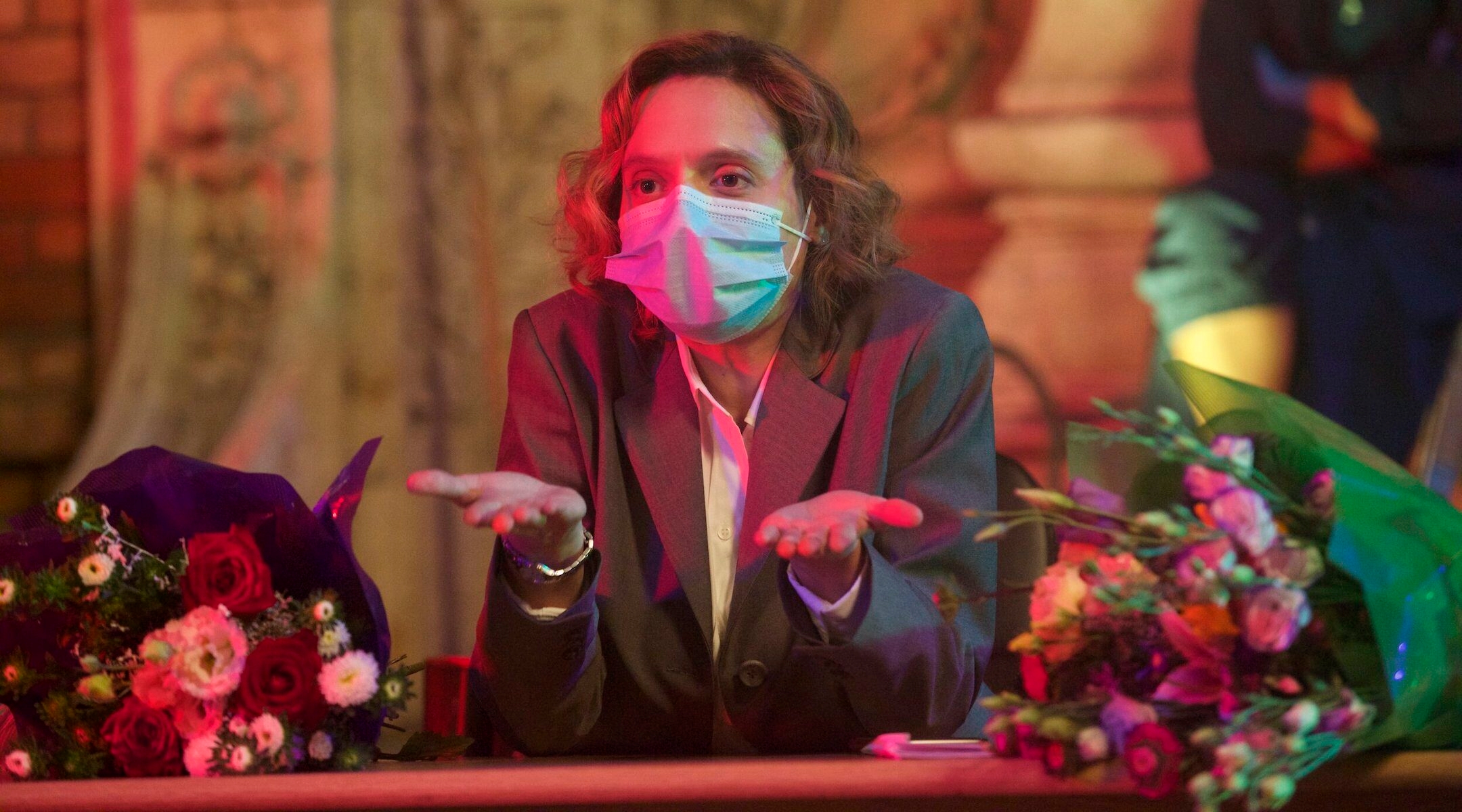 (JTA) — It begins with a hardcore sex scene. It ends with a debate about Holocaust education.

Coincidentally, Romania just enacted a law this week making Holocaust education mandatory in all high schools — a development that the history teacher at the center of “Bad Luck Banging” would likely meet with some skepticism.

In the movie, which was filmed and set during the first year of the COVID-19 pandemic, a history teacher at an elite Bucharest prep school (Katia Pascariu) films a sex tape with her husband and uploads it to an adult website. After her students find the video, she risks losing her job. The first third of the movie shows the teacher, Emi, wandering around Bucharest. The second is a discursive detour: in Godardian fashion, the film presents various words and concepts and defines them as it sees fit (“Children: Political prisoners of their parents”). The film’s final third depicts a climactic parent-teacher conference, during which Emi must defend her reputation against irate parents who are demanding her head on a platter.

It’s during this segment that the storyline suddenly pivots into a discussion of Romanian antisemitism. As the parents work to gather additional evidence to support their claims that Emi is an immoral teacher, they point to her lessons on the Holocaust, which include telling her students that Romanian troops, not just Nazis, murdered Jews of their own volition; the parents characterize such lessons as “indoctrinating our children.” (That quote inexplicably comes from a priest wearing an “I Can’t Breathe” mask. Is he a parent? The movie doesn’t elaborate.)

They also react with horror to the news that Emi cited Hannah Arendt, the Jewish German philosopher, in class to tell her students that grades aren’t as important as knowledge, and that she went off-curriculum to assign her students a story by the Russian Jewish writer Isaac Babel. When Emi says she’s not Jewish, one parent alleges she’s nevertheless been “paid by the Mossad.”

Such ugly accusations become commonplace in the film’s final stretch. “Hitler and the camp commanders were all Jews killing their own as an excuse to create Israel!” one parent asserts. He happens to also be a retired general in full military regalia.

The antisemitism is interspersed with other ignorant comments from parents, including anti-Roma sentiment, COVID conspiracy theories and latent nostalgia for dictator Ion Antonescu’s fascist regime. Lest the viewer takes any of this too seriously, the angry parents are occasionally drowned out by some guy on the soundtrack making Woody Woodpecker noises. So is this an indictment of modern society, or a silly cartoon? More likely it’s both.

Writer-director Radu Jude, a provocateur among the typically dour Romanian filmmaking scene, knows his audience will be shocked by his movie’s content — and that’s to his advantage. The sex appeal serves as foreplay, if you will, to a principled denunciation of Romania’s whitewashing of its own historical atrocities, including the nation’s difficulties acknowledging its own complicity in the Holocaust; through this lens, the film is best described as an angry farce.

Jude himself is not Jewish, despite his name — but he has a strong interest in stories that poke at Romania’s national narrative about its treatment of Jews. His 2019 satire “I Do Not Care If We Go Down In History As Barbarians” followed an artist as she attempted to publicly re-stage the 1941 Odessa Massacre, in which Romanian soldiers acting under the orders of Antonescu slaughtered tens of thousands of Jews.

Like “Bad Luck Banging,” “Barbarians” is a bitter and cynical film, displaying very little faith in the public to honestly confront its own history. The title comes from an infamous speech delivered by Antonescu, who was portrayed sympathetically in Romanian culture even after his execution for war crimes. It also serves as an artistic mission statement about the futility of processing atrocities in the eye of history. Both films offer their protagonists as stand-ins for Jude himself, artists and educators trying to communicate the right message in a sea of wrongheadedness.

Jude’s earlier films also delved into Romanian Jewish themes, including “Scarred Hearts,” an adaptation of a novel by the Romanian Jewish author Max Blecher; and two documentaries, “The Dead Nation” and “The Exit of the Trains,” dealing further with Romanian complicity in the Holocaust. “Bad Luck Banging” is considerably more playful and outrageous than his earlier works — there’s plenty of graphic nudity — and its canvas is bigger, focusing not just on Jews but on all manner of ways in which deeply ingrained prejudices and the added stress of the pandemic are swiftly rendering modern society uninhabitable. Every social interaction in the movie, from a grocery store customer yelling at a cashier to a driver deliberately hitting a pedestrian in a crosswalk, portrays a community on the verge of total collapse.

Spoiler alert: in the final scene, an enraged Emi inexplicably transforms into a superhero, ensnares all the parents in a giant net and does something very NSFW to them. “I told you she was a Jew!” one of them cries when they see her newfound superpowers. When it’s all over, the viewer is left feeling a little gross — and not always the way Jude intends.