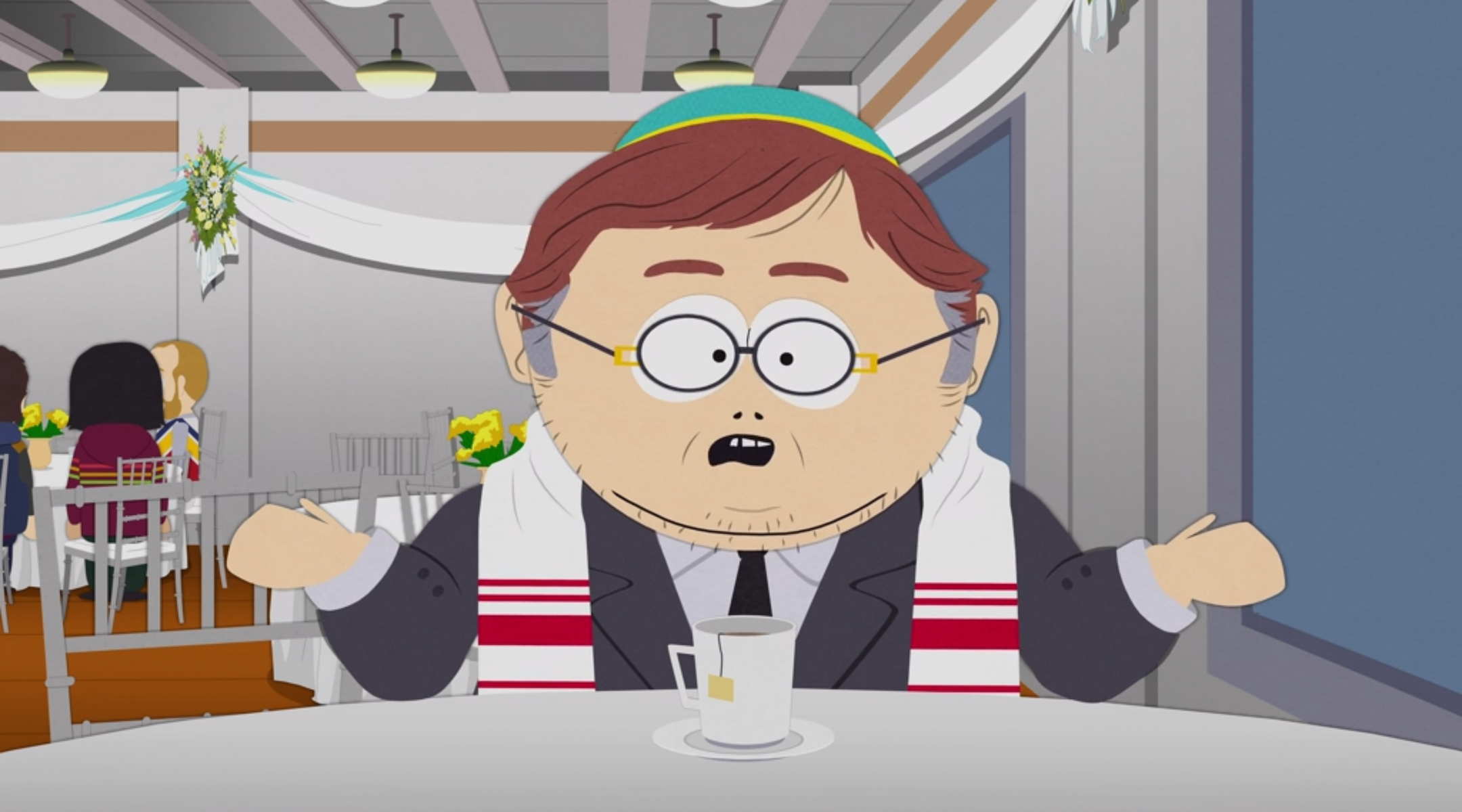 An adult Eric Cartman (Trey Parker) is now a rabbi on "South Park: Post COVID." (Screenshot via Paramount Plus)
Advertisement

(JTA) — One of television’s most notorious cartoon antisemites is now an Orthodox rabbi.

Eric Cartman, the egomaniacal, hate speech-spouting grade schooler on Comedy Central’s long-running adult animated series “South Park,” has had a change of heart in a new hour-long special of the show, which is set 40 years in the future.

In “South Park: Post COVID,” which debuted on Thanksgiving on the Paramount Plus streaming service, Cartman has converted to Judaism, leads a congregation in Colorado Springs, wears a tallit wherever he goes, and has a Jewish wife named “Yentl” and three children: “Moishe,” “Menorah” and “Hakham.” His trademark blue hat now serves as a kippah.

Is Cartman’s conversion for real, or some elaborate scheme directed at his old nemesis, Kyle Broflovski? “Post COVID” is only the first part of a new series of “South Park” movies commissioned as Paramount Plus exclusives, so we won’t know for sure what’s going on with him until the story arc continues sometime in December.

But his sudden devotion to the Torah is enough of a shocker to send Kyle, the show’s long-suffering Jewish protagonist, into fits of rage, as he becomes convinced his ex-friend’s new life is just a mean-spirited ruse.

The Cartman-Kyle storyline is only the B-plot of the new special — the rest involves the old schoolyard gang reuniting to try to uncover long-buried secrets of the pandemic — but “South Park” has long used the dynamic between the two as politically incorrect comic fodder, dating back to the show’s debut in 1997. Series co-creators Matt Stone (who is Jewish, and voices Kyle) and Trey Parker (who voices Cartman) have built many episodes around Jewish themes, frequently making note of Cartman’s antisemitism — usually as a way to mock actual antisemites.

The pint-sized sociopath has previously impersonated Hitler in an attempt to get “Passion of the Christ” fans to re-enact the Holocaust; faked having Tourette Syndrome in order to spout antisemitic speech in public; and tried to force Kyle to hand over his “Jew Gold”. He’s even jokingly converted to Judaism before, in a 2012 Passover special.

But this time, Cartman actually seems serious about his faith — he even yells out Talmudic lessons while in the bedroom with his wife. Kyle, meanwhile, seems to have lapsed from his own beliefs in the intervening decades, noting at one point, “It’s been a long time since I’ve prayed.” The rest of the Broflovski family, who play a large role in the original “South Park” series and in the 1999 feature-length film, are nowhere to be found in “Post COVID,” though Kyle still lives in their house and keeps their photos on his wall.

So maybe seeing his longtime frenemy embrace the faith he once ridiculed could open up something in Kyle. But if so, that may take some more healing. When circumstances compel Kyle to host Cartman’s family, he instead tries to kick them out. One of Cartman’s kids exclaims, “This is just like when our people were exiled from the Holy Land!”

Jewish fans of “South Park” are used to Cartman’s shenanigans: Odds are, there’s something funny going on here. We won’t know for sure what’s up with him until the next made-for-streaming film, which is due next month.

“South Park: Post COVID” is now streaming on Paramount Plus.