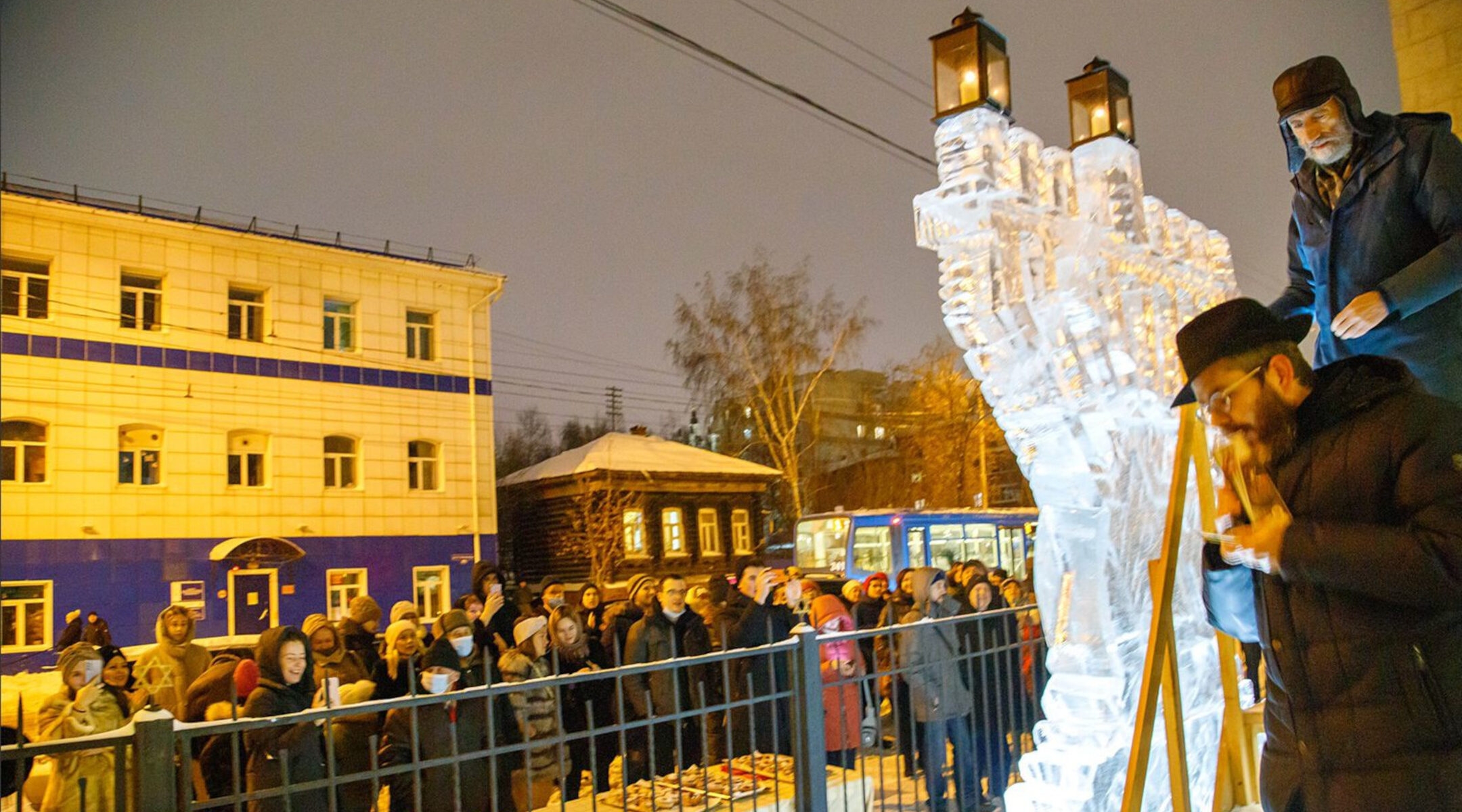 Rabbi Levy Kaminetsky, bottom right, prepares to light a Hanukkah menorah made of ice outside his synagogue in Tomsk, Russia on Nov. 28, 2021. (Courtesy Levy Kaminetsky)
Advertisement

(JTA) — The ice menorah of Tomsk has become something of a Hanukkah tradition in that Russian city in Siberia, situated about 2,000 miles east of Moscow.

At 10 feet tall and featuring LED lights incorporated into the branches, it shines in the yard of the city’s Chabad synagogue and is seen as a Jewish addition to the annual Tomsk Ice Park exhibition, whose giant ice sculptures attract thousands of tourists to the city annually.

But Hanukkah came early this year, which was an unusually warm one, jeopardizing the decade-long tradition started here by Levy Kaminetsky, the energetic Chabad emissary who moved with his wife, Gitty, to Tomsk in 2004 from Israel.

“We were watching the thermometer every day,” Kaminetsky told the Jewish Telegraphic Agency.

Eventually, and after some compromises to aesthetics, the ice menorah was sculpted, erected and used for the first candle of Hanukkah Sunday. It is currently the only known ice menorah on the continent, as other Siberian Jewish communities were not able to erect their own ice menorah as they have done in previous years.

The couple realized they might have a problem during Sukkot, in late September.

“Unlike in previous years, it didn’t snow this year during Sukkot,” said Kaminetsky. He said that he believed that this year has been the warmest winter in a long time in Tomsk, and that it could be — as nearly all scientists agree — the result of climate change. The average temperature in Western Siberia is on the rise, scientists there have documented.

Had Hanukkah come this year in mid-December, as it did last year, then the ice would have certainly been safe enough in Tomsk. The mercury never rises past 12 degrees Fahrenheit during that month. But with the holiday, which is determined by the Hebrew lunar calendar, occurring two weeks earlier, “it was really touch and go,” Kaminetsky said.

The main complication was in obtaining the ice, which needs to come from a frozen lake.

“You can cut out the ice only after a few days that the temperature is 14 degrees Fahrenheit or below, otherwise the ice on the lake is not safe enough for the workers extracting the block for the menorah,” he said.

Fortunately, the temperature dipped just in time. A block weighing several tons was carved out by a professional team and trucked over to the synagogue’s yard, where a sculptor quickly shaped it into the nine-branched menorah. But the ice was too soft for drilling, so the artist was not able this year to install lighting in the frame of the menorah.

The Kaminetskys are not disappointed, though. They fitted the menorah with lamps for a candle-lighting celebration Sunday in toasty conditions: It was almost 16 degrees out.