For a growing number of Jews in Israel, it’s beginning to look a lot like Christmas 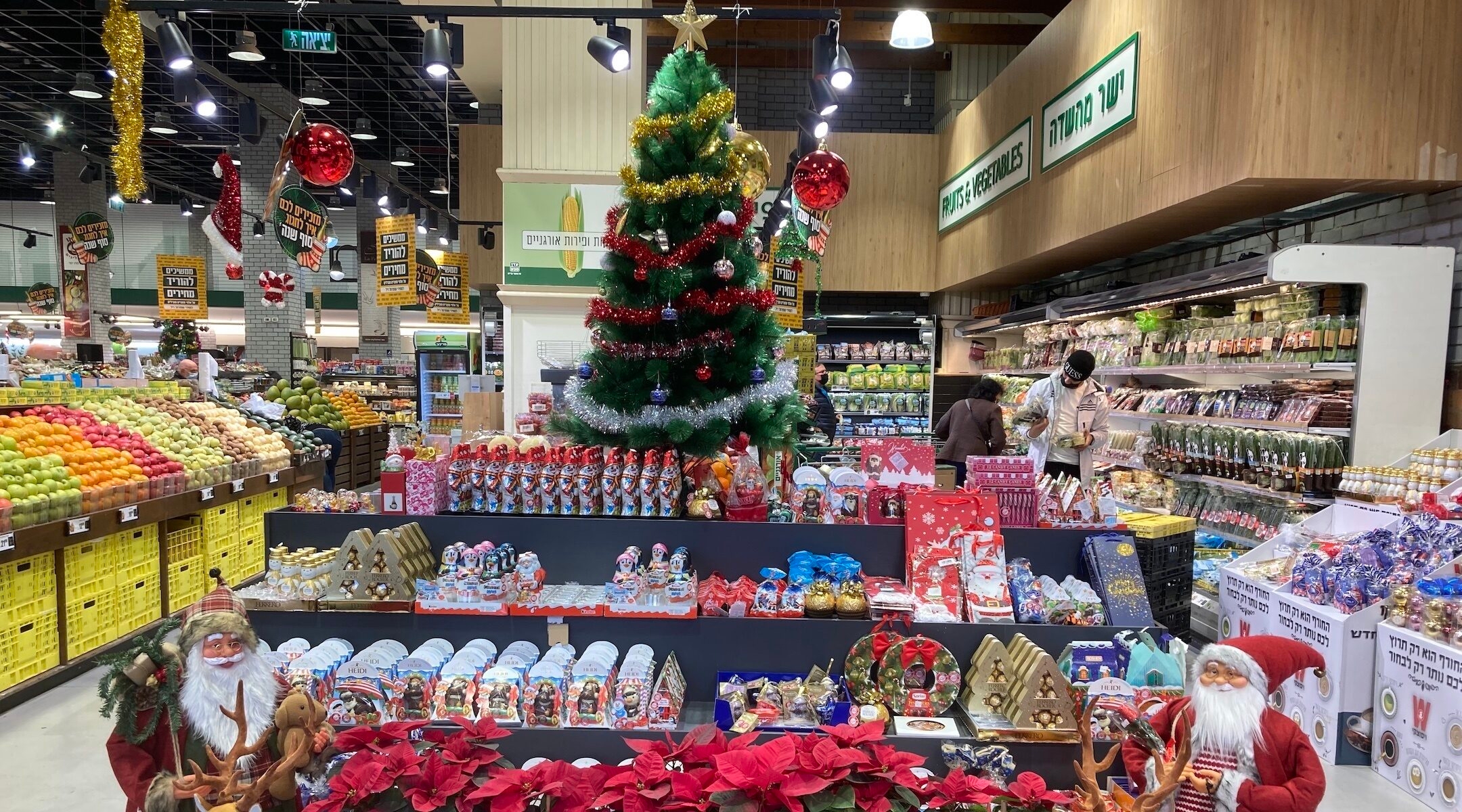 TEL AVIV (JTA) — You ask Yaeli Amir, a seven-year-old Jewish girl growing up in a rural town in Israel, what her favorite holiday is, and she won’t name any of the almost countless Jewish ones. Instead, she’ll say, without hesitation, “Christmas!”

Yaeli knows all about Santa Claus, and the decorated tree people keep in their home, and the gift-giving. But the joy derives primarily from the weather: “It’s fun because it snows and you get to play in the snow,” she said.

She hasn’t exactly gotten to play in the snow on Christmas in Israel. But Yaeli has imbibed the holiday’s traditions while watching movies like “The Grinch” and going on a family trip to New York City, where she got to hug a Santa mannequin.

Yaeli’s secular Jewish parents embrace Christmas, not for religious reasons but as an occasion for celebration. The same holds for Halloween.

Yaeli’s mother, Dana, said her rural cooperative village, known as a moshav, is planning to host an American-style Halloween with costumes and trick-or-treating next year.

“I am on the moshav’s education committee and we just talked about how we have to plan a Halloween party next year because all over Israel they have started to celebrate Halloween,” she said. “We are about the last moshav that hasn’t.”

Signs that similar sentiments are widespread can be seen all over Tel Aviv, the bastion of secular Israel. The party stores near Tel Aviv’s Levinsky Market carry Christmas-themed decorations and clothing accessories. Tiv Ta’am, a supermarket chain notable for selling food that doesn’t meet kosher dietary rules, has a large Christmas tree display at the entrance to its flagship store. Only about 2% of the population of Israel are Christians, the vast majority of whom identify as ethnically Arab, according to the Pew Research Center.

One of the factors likely driving this trend is the influx over the past 30 years of more than a million immigrants from the former Soviet Union, many of whom were deeply secular and, in some cases, identified as Christian or had Christian spouses. The highly assimilated immigrants also brought with them a civic holiday called Novy God that resembles Christmas. 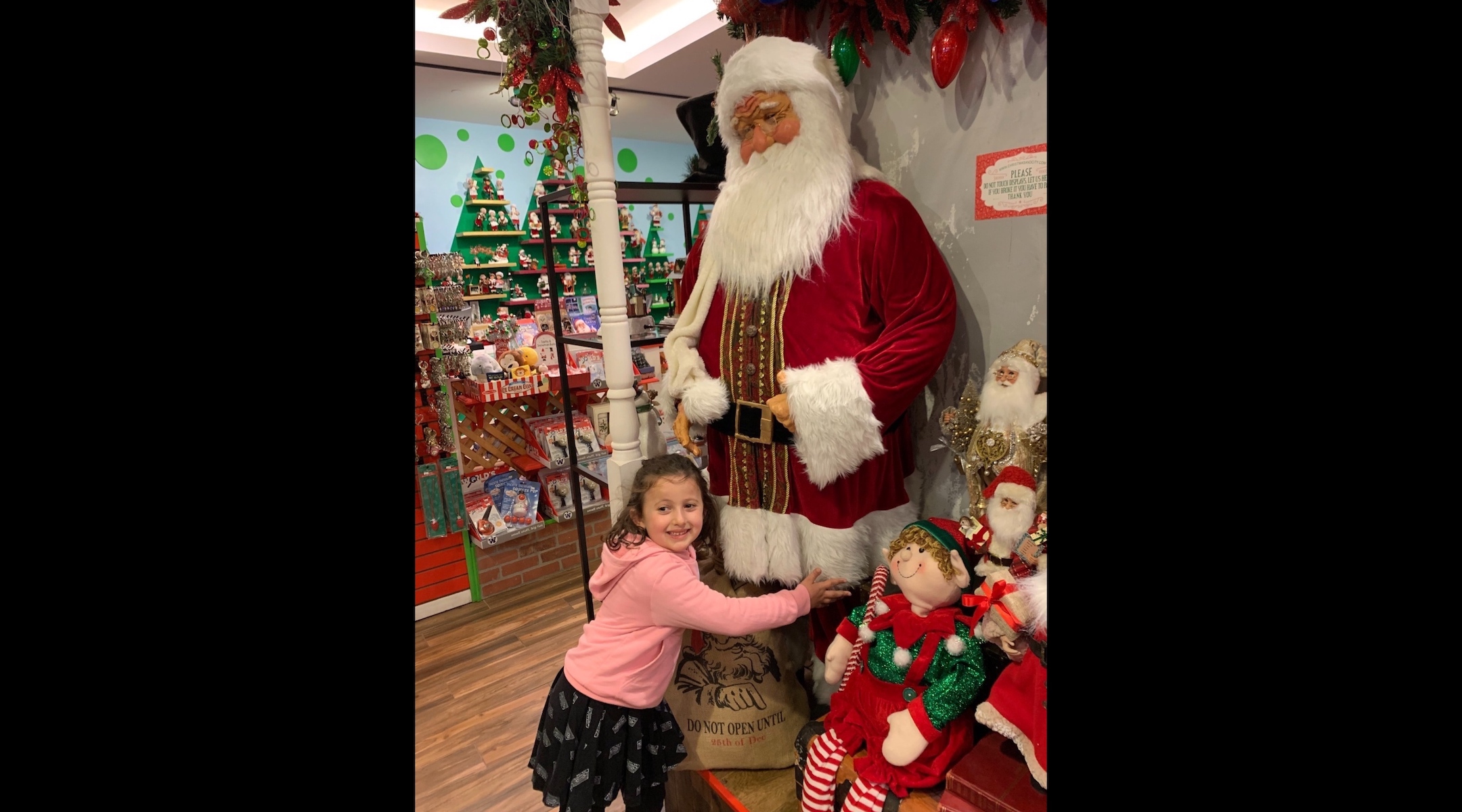 Yaeli Amir, 7, a Jewish Israeli, hugs a Santa mannequin at the Christmas and City store in New York’s Times Square during a visit to Manhattan in 2020. (Courtesy)

Of course, the fact that the Holy Land is the place where Jesus is believed to have been born, lived and died raises awareness of the holiday, although in recent years COVID-19 and occasional unrest have suppressed tourism to Bethlehem and other sites connected to the Christmas story. Instead, with strict foreign travel restrictions in place, Jewish Israelis have been flocking to Christian sites like Nazareth. “We’re not going overseas so fast at this point in the coronavirus,” a Haifa psychologist, Roni Harari, told Agence France-Presse this week. “Here it feels like a little bit of abroad.”

But there’s also a newer phenomenon at play: Israel’s massive tech sector. Concentrated in and around Tel Aviv, the culture among startups and established companies is shaped by secular Israelis, including a significant contingent of Soviet immigrants or their children.

According to Tamara Raynor Cote, a public relations account manager and HR coordinator in Tel Aviv with lots of tech clients, the industry likes to foster holiday spirit during Halloween and Christmas.

“A lot of HR or office managers will buy into these holidays,” Raynor Cote said. “When I went to buy Halloween decorations it was me and all the HR managers of Tel Aviv.”

She said tech companies who are competing to recruit from a limited supply of computer engineers want to project an image of excitement and cosmopolitan savvy. They routinely throw parties where pop stars perform, for example. Having employees celebrate during Christmas and Halloween at the office and posting photos of them doing so on social media generates a desirable kind of buzz.

“It comes down to wanting to look international and fun, it helps with recruitment,” she said. “Having the appearance of being a globally-minded company is appealing.”

In a recent podcast discussing “Christmas in a Jewish Majority State,” the American-born Israeli writer Yossi Klein Halevi suggested that Jews in Israel could appreciate Christianity and Christmas without the anxiety that religious Jews like him experienced growing up in the United States.

“We were now a sovereign state with a Christian minority. We had reversed the dynamic. And so I felt this tremendous opportunity as an Israeli” to learn more about Christianity and Islam, he said on the podcast, a production of the Shalom Hartman Institute, where he is a senior fellow. “I could discover Christmas…. I could allow myself the possibility of holy envy to a religion that I’d grown up fearing and loathing.”

Amid the holiday excitement, Dana Amir, Yaeli’s mother, paused to reflect on the significance of marking holidays that come from outside the Jewish tradition. When she was growing up, her family would have frowned upon the idea.

“Someone said, ‘Let’s also do something for Christmas as a moshav,’” Dana recalled. “I told her, ‘Good thing my grandmother isn’t alive to hear what we are doing.’”

But Dana says she is raising Yaeli and her two sisters to appreciate Judaism, and that enjoying the trappings of Christmas doesn’t come at the expense of celebrating Jewish holidays. “It’s all in good fun,“ she said.