In Germany and Austria, a movement of grandmothers is taking on the far right 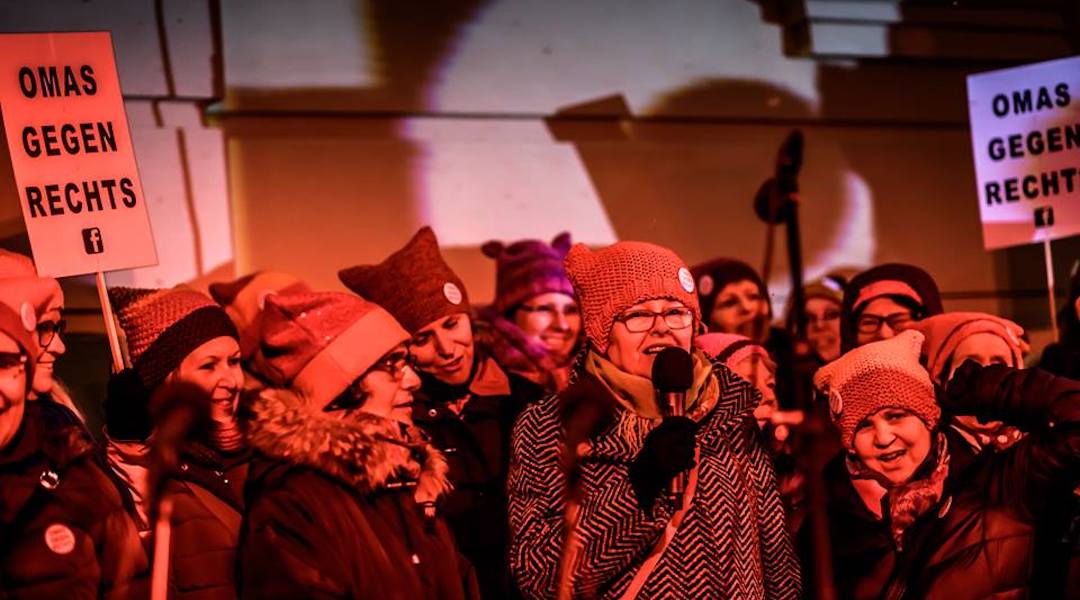 Monika Salzer speaks at a rally with fellow members of the Omas Gegen Rechts group, or Grandmas Against The Right, which she co-founded in 2017. (Omas Gegen Rechts)
Advertisement

BERLIN (JTA) — Neo-Nazis in Germany and Austria have a formidable new foe: grandmothers.

The rise in right-wing antisemitism in those German-speaking countries, along with years of mounting anti-immigrant sentiment pushed by some in government, were catalysts for Susanne Scholl, a retired television journalist. In the fall of 2017, she joined the fledgling Omas Gegen Rechts group, or Grandmas Against The Right.

Omas Gegen Rechts started as a group of 10 elderly women at a protest of over 5,000 against some of the right-wing policies of former Austrian Chancellor Sebastian Kurz in late 2017. It has since become a movement of over 100 local chapters in Germany and seven in Austria. Some of them are Jewish, some of them not, but they are all aligned against the forces that they say are driving antisemitism. They often wear pink “pussyhats,” borrowed from the American Women’s Marches against former President Donald Trump.

Their efforts haven’t gone unnoticed by Jewish organizations and their supporters. In 2020, the Central Council of Jews in Germany awarded Omas Gegen Rechts the Paul Spiegel Prize for Civil Courage. The prize has been handed out since 2009 in memory of the Council’s earlier president, Paul Spiegel, and those committed to fighting racism and antisemitism.

“The Omas Gegen Rechts are regularly harassed because of their activities but they never allow themselves to be intimidated,” wrote Josef Schuster, president of the Council. “They send loud and clear signals against antisemitism and racism. That’s exemplary and we wanted to honor that with this award.”

“They show that this kind of active advocacy for democracy is still possible at an advanced age,” he added.

The Omas got their start at the so-called Thursday Demonstrations (which took place every Thursday) in Vienna in the wake of the Ibiza Affair, when then-Vice Chancellor Heinz-Christian Strache was seen in a video seemingly admitting to a range of corrupt acts. Fallout from the video resulted in the collapse of parliament’s ruling coalition, including a no-confidence vote for Kurz.

Kurz, a young politician who forged close ties with Israel, promoted himself as a leader focused on tackling antisemitism. But Scholl, who is now deputy board chairwoman of Vienna’s Omas chapter, argued he did not have that reputation on the ground. The Jewish Community of Vienna reported in 2020 the highest number of antisemitic incidents since the organization began tracking 19 years ago.

(The new administration of Chancellor Karl Nehammer got off to a rocky start following accusations of antisemitism against his Interior Minister, Gerhard Karner, over a comment Karner made a decade ago. Karner has since said he regrets calling Israelis “climate poisoners” (referring to “dirty campaigning” by an Israeli political advisor) and would not make it today, but Jewish students and other prominent figures in Austria have called for his resignation.)

The increase in antisemitism in Germany is more stark: The Central Council of Jews in Germany reported a spike in antisemitic crimes at the end of 2020, a year after the attempted shooting at the Halle Synagogue and a murderous rampage at a bar in Hanau targeting immigrants.

After the Thursday demonstrations died down, the Omas began forming their own separate protests. In 2019, when Holocaust denier Nikolai Nerling filmed himself denying the genocide in front of school children visiting the Dachau concentration camp, under a banner reading “For German Culture,” Omas were there with a banner reading “For Cultural Diversity.” 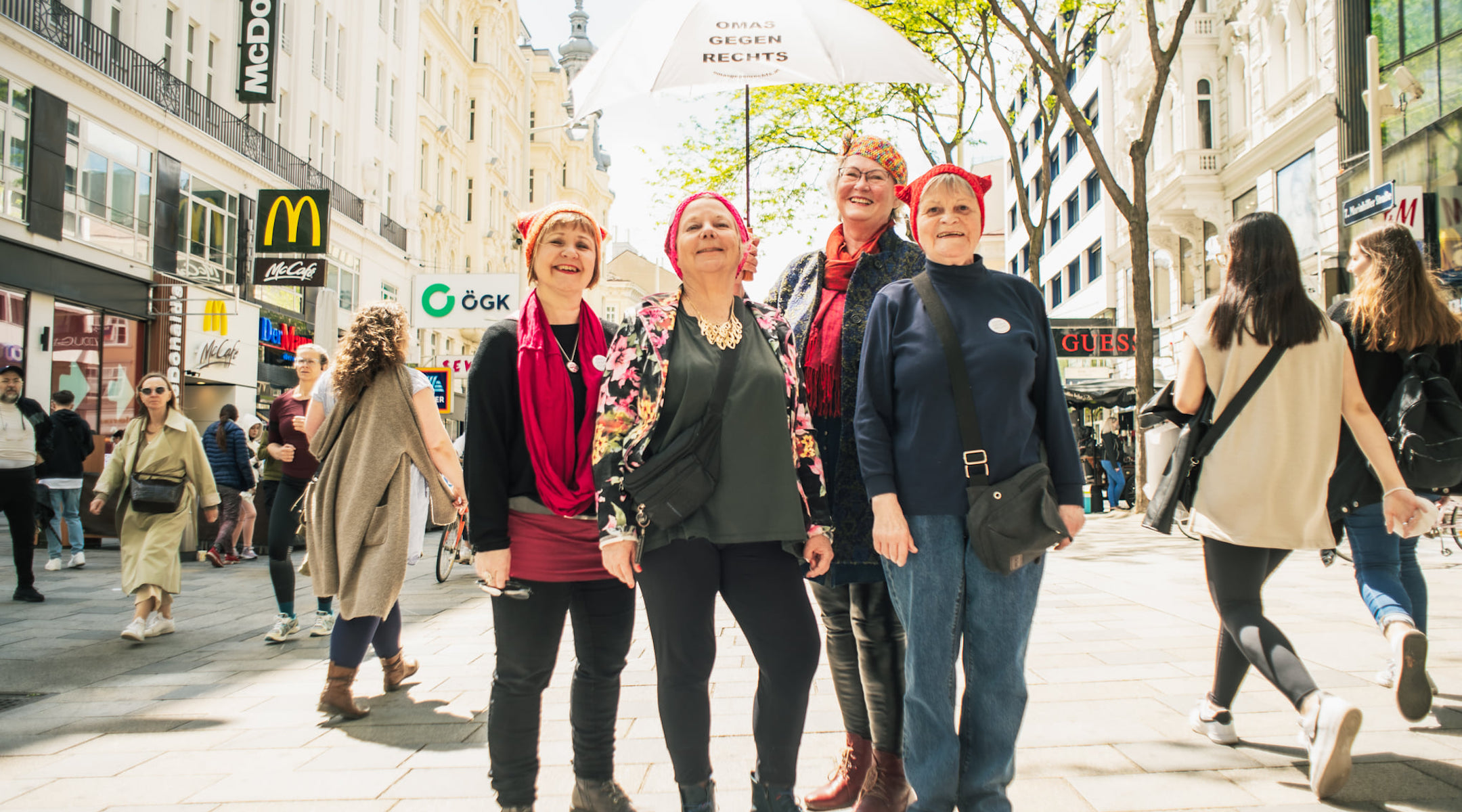 The Central Council of Jews in Germany gave the group an award in 2020. (Omas Gegen Rechts)

Chapters in Germany also clean Stolpersteine, brass stones scattered acr0ss the country’s streets that mark the former homes of Jews forced out by the Nazis. In September 2020, the Omas instituted a daily vigil, every Monday through Friday from 10:00 a.m. to 4:00 p.m., in solidarity with refugees stuck in camps across Europe.

The Berlin chapter also protects the city’s famed Memorial to the Murdered Jews of Europe, surrounding it when protests led by right-wing extremists and the anti-vax Querdenker movement pass it by. The use of Holocaust imagery to protest coronavirus lockdowns and other public health measures is especially frequent in Germany. Protestors are often seen wearing yellow Stars of David with the word “unvaccinated,” despite criticism that it minimizes the horrors of the Holocaust.

“Together with the Jewish community and everyone else in Berlin who didn’t want them to walk by the synagogue or the Holocaust Memorial, we were successful in changing their route,” said an Omas member about one of their counterprotests. She wanted to remain anonymous because her name has shown up on lists circulated by far-right extremists. “We stood up to them and showed them what we stand for and what we stand against. We didn’t want them to be able to just walk by unchallenged.”

Scholl grew up in a Viennese Jewish family but did not realize until years after her childhood that she had internalized societal antisemitism. There were no explicit instructions to hide her Jewishness, but it’s a message she seemed to receive nonetheless. She recalled incidents that did not mean much to her as a child but she later realized were antisemitic.

She says western European nations have still not fully processed their contributions to the Holocaust, and that lack of reckoning has “made it possible to be openly antisemitic again.” 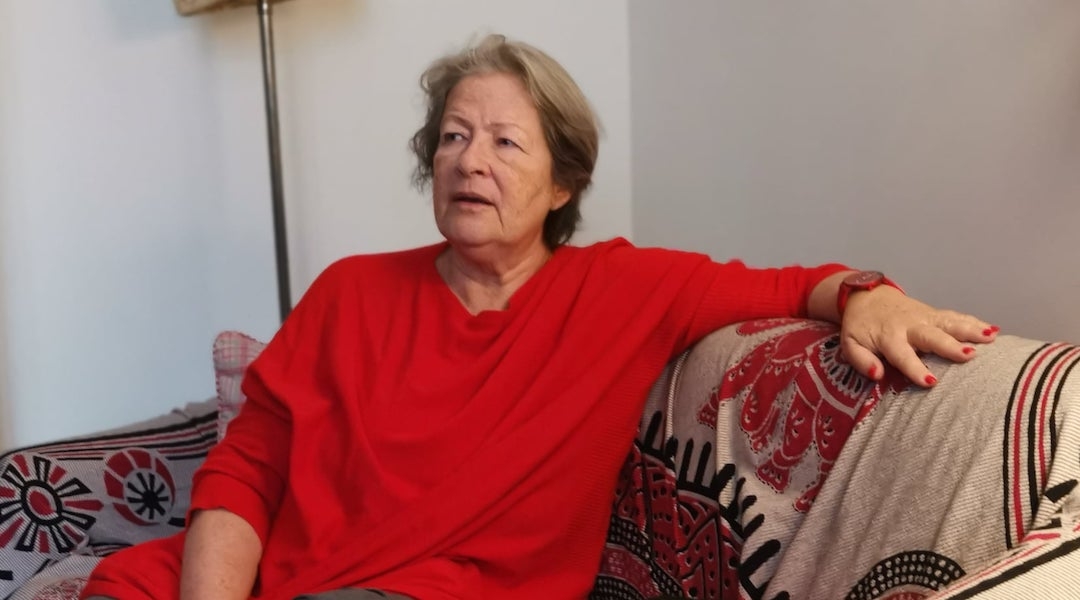 Susanne Scholl is now deputy chairwoman of the board of directors of the Vienna Omas chapter. (Omas Gegen Rechts)

Regardless, Scholl insisted that Austria is and will remain her home.

“Despite everything, I’m an Austrian first and foremost,” she said. “And I won’t allow myself to be driven out of this country.”

She recalled a turning point at one of the Thursday rallies, when she first felt the impact that the Omas could have. In a show of respect for the grandmothers, a group of Black protestors allowed them to lead a demonstration.

“There were a lot of young people who were cheering us on, smiling and waving at us until we moved to the front of the demonstration,” Scholl said. “We had a calming effect and I think it’s a role we took on that we didn’t necessarily plan on. It became known that when the Omas Gegen Rechts are at a demonstration, then it was going to proceed calmly.”