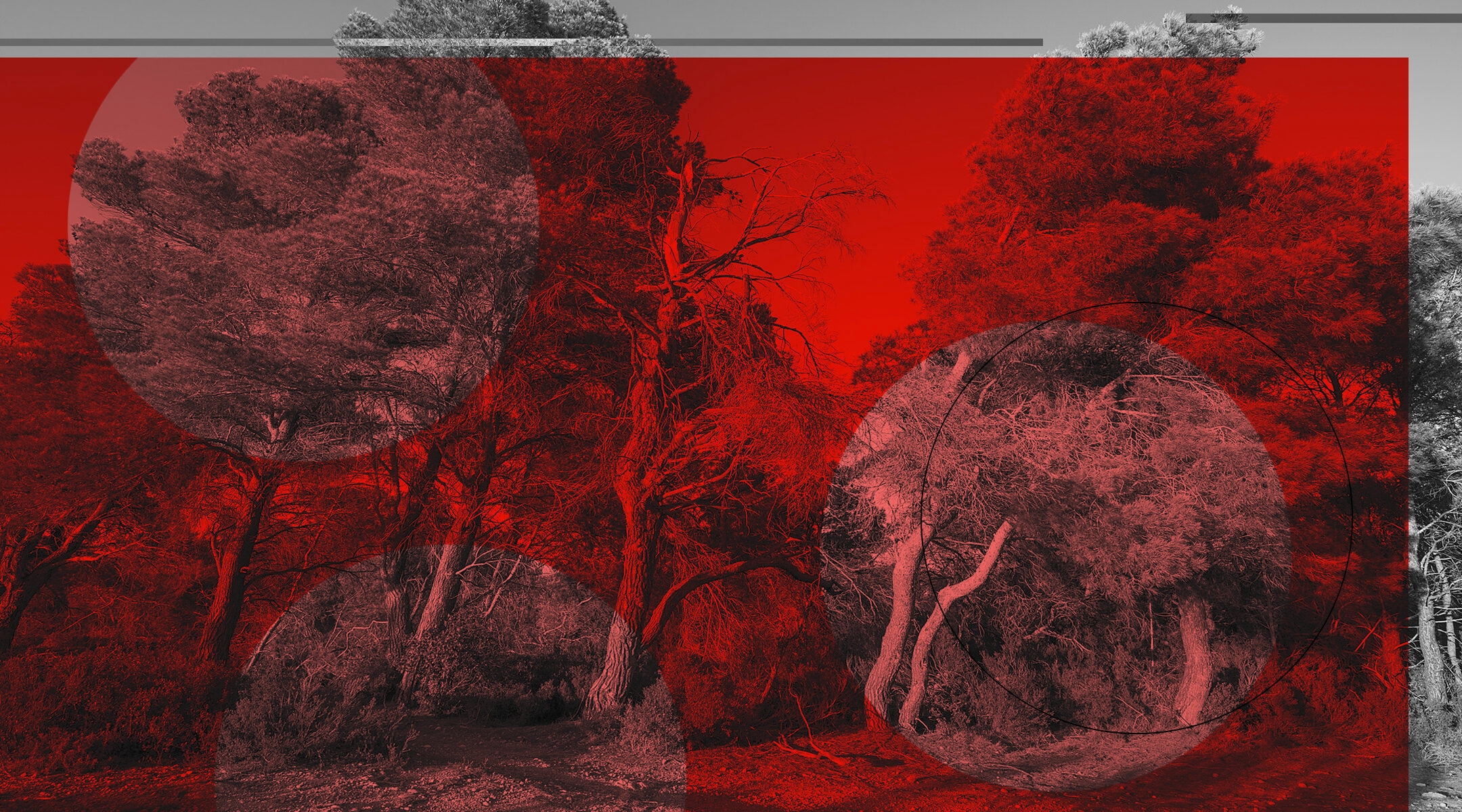 HAIFA, Israel (JTA) — Each year on Tu Bishvat, the Jewish holiday celebrating trees and plants, Lior Weitz and his wife take their two daughters to plant saplings of pine — the tree that more than any other symbolizes Israel’s historic forestation project.

They join thousands of families at one of the annual planting ceremonies organized by the Jewish National Fund, a Zionist organization established in 1901 and the Jewish state’s main forest management agent. It has planted about 240 million trees, many of them pines, on some 227,000 acres, a land area larger than New York City.

“It’s an activity that combines everything we believe in: The love of the environment, land, country and growth,”said Weitz, 46, a website manager from Ramat Gan.

Diaspora Jews, meanwhile, have long grown up donating money for JNF trees, a tangible symbol of their emotional and financial investment in Israel.

But increasingly, the JNF’s signature program has drawn vocal critics. Those with ideological objections call it colonialist, and environmentalists call it harmful because it has allowed a single species to spread unchecked, diminishing biodiversity and increasing the risk of forest fires.

The colonialism claims have resurfaced periodically in international media as part of their coverage of the Israeli-Palestinian conflict, linking forestation to the “Judaization” of previously Arab-owned land. Advocates of JNF say its forests are planted on land legally purchased by Zionists for the establishment of a Jewish state. A JNF spokesperson told the Jewish Telegraphic Agency that the tree planting began as an effort to “demonstrate ownership” over non-urban Jewish-owned land that could not be farmed.

The most recent example of this wider controversy is unfolding in the Negev desert, where Bedouins have protested that the trees are disrupting their farming livelihoods. Dozens have been arrested in police clashes, and an Arab-Israeli party put the Israeli government’s razor-thin coalition majority in jeopardy by threatening to pull out of the coalition until the forestation stopped. As of Wednesday night, JNF building had stopped in the area.

But the conflict does not appear to have diminished Israelis’ enthusiasm for the practice. About 30% of the 300,000 trees that JNF plants annually are placed in the ground by volunteers, according to Hagay Yavlovich, one of the JNF’s senior-most foresters.

Some planters, like the Weitz family, record the coordinates of the trees they plant and visit them occasionally to admire their growth.

“There’s a whole connection with the tree. We always collect the little flags that mark pits where we plant the tree. We have dozens of these souvenirs,” said Lior Weitz, who has been coming to JNF events since his oldest daughter, now a teenager, was 2 years old.

This year on Tu Bishvat, which falls on Jan. 16, JNF will not perform public plantings in deference to the “shmita” year — an agricultural sabbatical, mandated in the Torah, that occurs every seven years.

The other debate about JNF’s plantings, meanwhile, has turned what was a niche scientific discussion among environmentalists a decade ago into a recurring topic in mainstream media, largely due to devastating forest fires that swept through JNF forests in 2010, 2016 and 2021, killing people and animals and destroying homes. 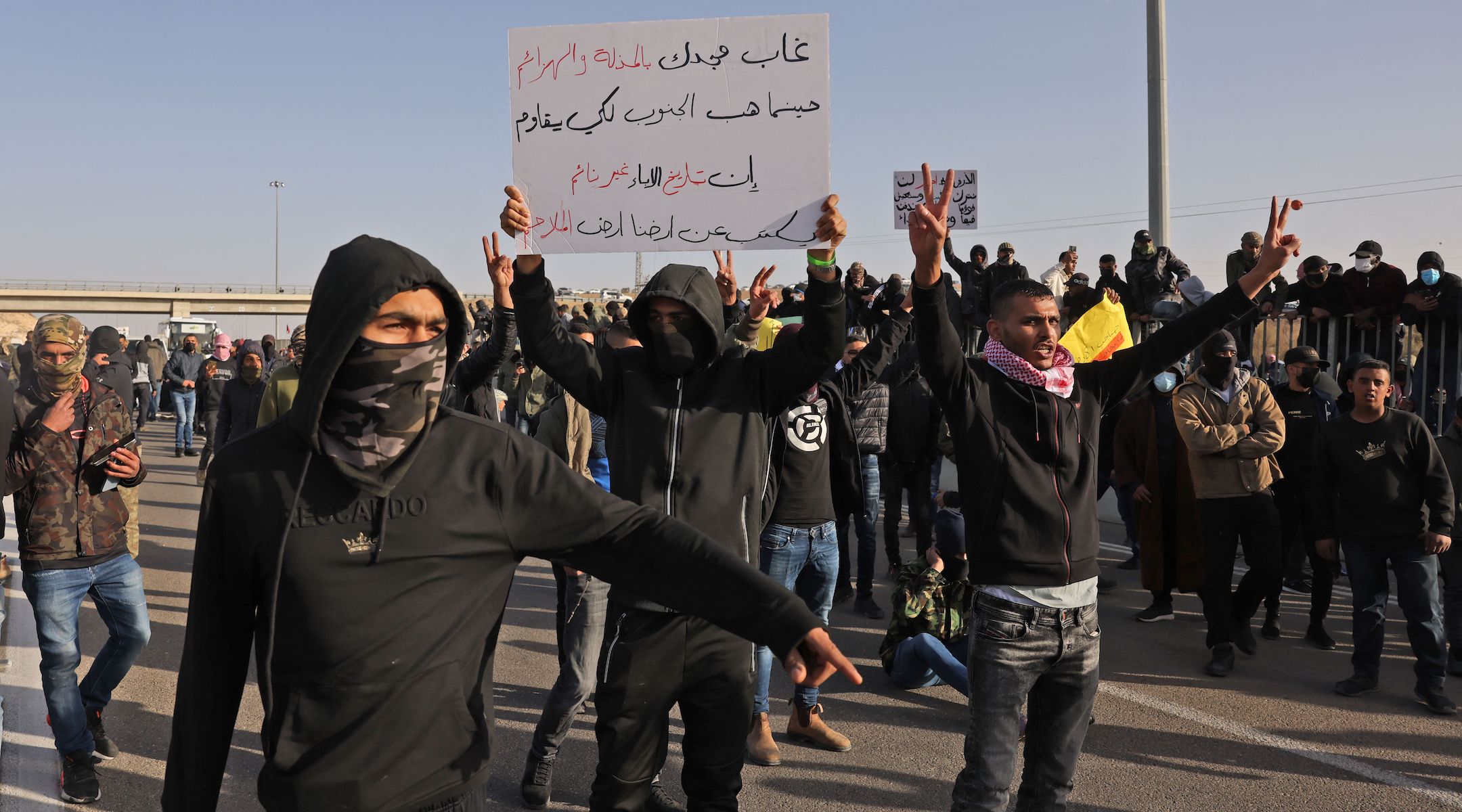 Bedouin protesters at a demonstration against a forestation project by the Jewish National Fund (JNF) in the southern Israeli village of Sawe al-Atrash in the Neguev Desert, Jan. 13, 2022. (Menahem Kahana/AFP via Getty Images)

Yaakov Franko, a lawyer specializing in landscape legislation, led one of the first public discussions on the issue in 2005, in a Globes op-ed titled “Seven of the Pine’s Problems.”

He claimed that the trees, mostly Aleppo pines, are an invasive species and that each pine tree “is like a gallon of petrol.”

“The sap, the needles, the acorns, the trunks burn rapidly, spreading through the broken limbs near the root system, where no other plants can grow and moisten.

“That’s why a single cigarette butt can light up the area between Hadera and Gedera,” he continued, naming cities at opposite ends of Israel’s center.

Pines were selected because they “reminded the leaders of JNF of their homelands in snowy Europe,” wrote Franco, who is a Sephardic Jew. “Luckily they didn’t come from Mexico, or we would have had peyote cactus forests,” he quipped.

JNF defended their signature tree in two articles published in Globes, arguing that Aleppo pines were neither an invasive species nor proven to be especially flammable. They were chosen after other species proved less hardy or slower to grow, JNF wrote.

Still, JNF sometimes boasts about the Europe-like feel of its forests. One promotional article on their website from 2013 declares that Germany’s Black Forest “has got nothing on us.” And many hikers enjoy them. On a recent Saturday, Daniel Kobi, a father of two from Kiryat Ata, told the Jewish Telegraphic Agency that he enjoys coming to the forest named for his suburb of Haifa because “it feels like the Swiss Alps right around the corner” from his home.

The debate over the trees returned and intensified after the 2010 fire in the Carmel, which consumed more than 6,000 acres and killed 44 people.

“It’s the most maligned tree in Israel. Pines are blamed for all ills: fires, devastating naturally occurring plants. You name it,” Klil Adar, head of JNF’s forest department, wrote on one of their websites in 2019. He called these claims “myths” and said pines “will continue to be the backbone of forestation efforts” in Israel.

Adar is right about the native credentials of the Aleppo pine, according to Tamir Klein, a botanist from the Department of Plant and Environmental Sciences of the Weizemann Institute of Science. While JNF did use some invasive species, including the eucalyptus from Australia, the Aleppo pine has grown in Israel for millenia.

But JNF did extend the tree’s range beyond any previous point in history, according to Klein and to the Israel Nature and Parks Authority.

The end result is radically different to the much denser and lower woods that would have occurred naturally in this part of the Mediterranean.

With their large crowns, Aleppo pines leave very little sunlight for lower shrubs. And they shed a thick blanket of needles that prevents the growth of most plants, and almost all of the flowers gracing the Israeli countryside — including its 30 species of orchids and 16 Iris species.

This means that the forests planted by JNF tend to have a much lower biodiversity than naturally occurring Mediterranean forests that nurture a multitude of insects, reptiles, birds and mammals. 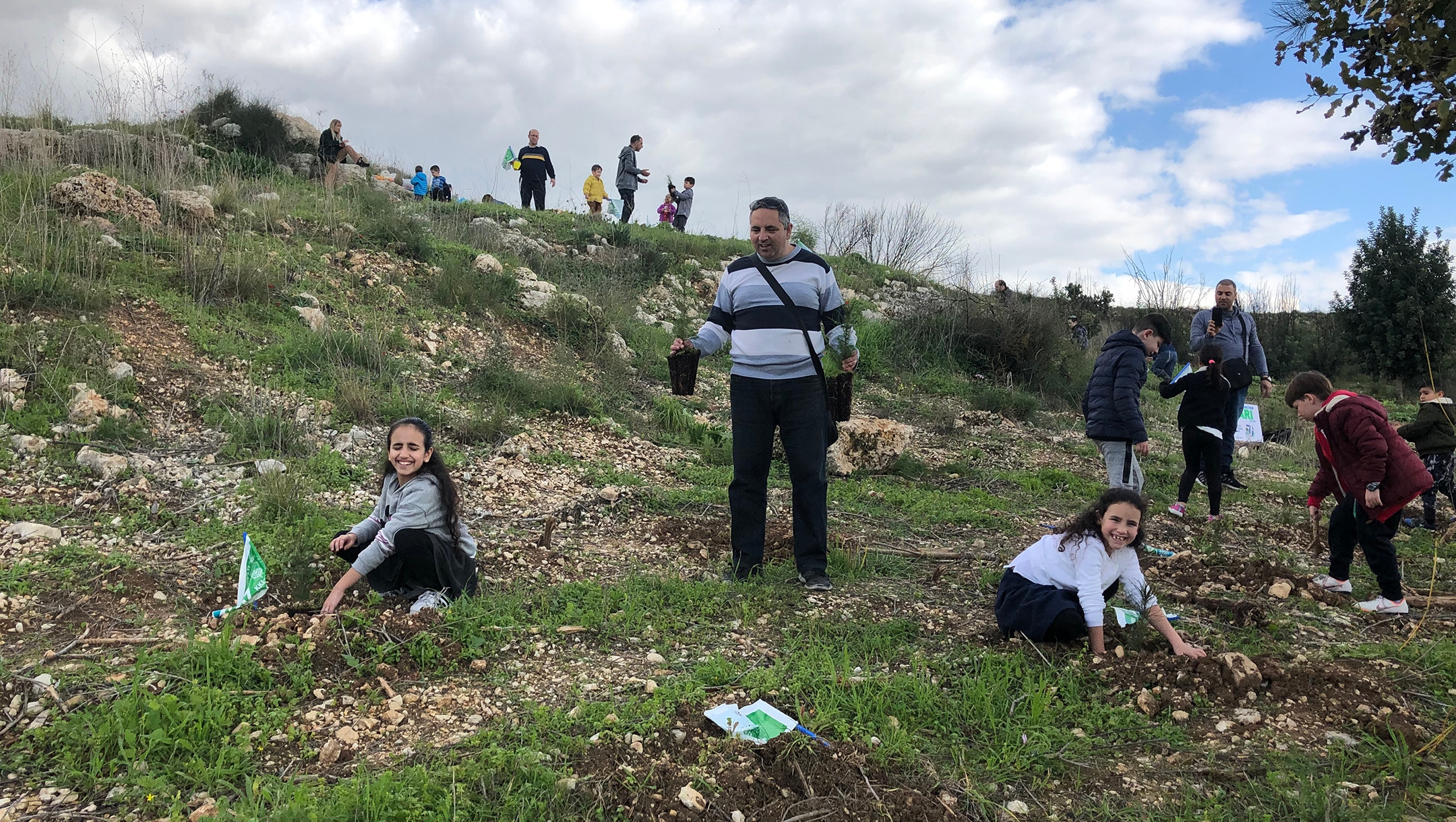 One of the fauna, the Green Lizard, a dazzling creature that can grow to 17 inches long, has gone from abundant to scarce. Various species of snakes and scorpions have increasingly moved into urban areas as their natural habitat dwindled.

But the natural woods were largely felled long before JNF planted pine trees in their stead, Klein, the Weizmann Institute scientist, said.

“The area of Israel has been overused for millennia. The local natural woods had been severely suppressed for centuries before JNF began planting trees,” he told JTA. The planted woods, for all their environmental issues, “turned pasture lands with hardly any vegetation into natural habitats at a time where globally forests mostly shrank due to logging and urbanization,” he added.

But the original vegetation may be making a comeback — thanks to the pines, he added.

In the shadow of pine trees, lower vegetation is beginning to grow, replacing pines wherever they succumb to diseases. “So there’s diversification that is occurring naturally, and the pines were the stopgap that made it possible,” Klein said.

Meanwhile, the connection between forest fires and the abundance of pines, which are rich in highly flammable oils, continues to be a point of contention among professionals.

The Nature and Parks Authority says the pines are more flammable than others and that their acorns pop during fires and spread the conflagration.

Yavlovich, the JNF forester, disputes this claim. “Massive pine trees burning make for great pictures, so they get a bad rap. But they’re not more flammable than many other local trees. Olive trees burn for hours. Palms burst into flames like torches,” Yavlovich said. Fire prevention is achieved by clearing debris and early detection, not species selection, he argued.

Forestation is a long-term effort that needs to be examined over many years, Yavlovich said, and JNF has diversified its use of species. (JNF in 2019 said it is importing Turkish and Canary pines, both of them introduced species, to diversify the coniferous populations.)

“The pine tree was the correct choice for its time from a practical point of view, but also from that of a forest management perspective. It set apart natural land, protected it and will slowly give way to local species,” he said.