After fires raged in Boulder, Jewish Coloradoans turned out to help — and received it in turn 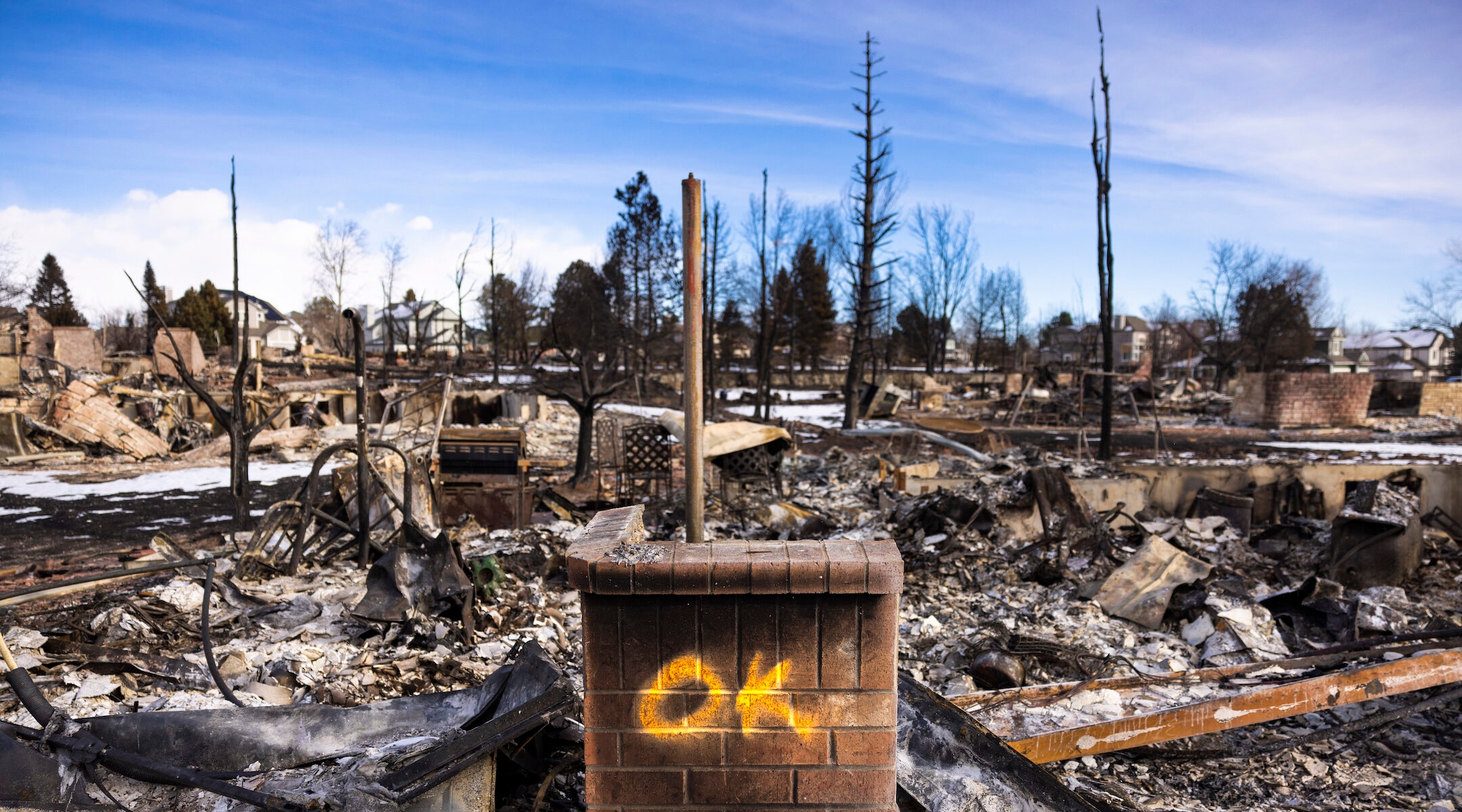 The word "OK" is spray-painted on the remains of a home in a neighborhood decimated by the Marshall fire in Louisville, Colo., Jan. 4, 2022. Officials reported that 991 homes were destroyed in the fire, making it the most destructive wildfire in Colorado history. (Michael Ciaglo/Getty Images)
Advertisement

(JTA) — As Alan Halpern prepared to retire from his role as the executive director of Boulder’s Congregation Har Hashem, he made a list of 100 things to do with his newfound free time. He didn’t expect that first on the list would be helping his neighborhood recover from the most destructive fire in Colorado’s history.

In Halpern’s Louisville, Colorado, neighborhood of 140 houses, only three homes remain intact following the Marshall fire, which surged across 6,219 acres starting Dec. 30 and burned more than 1,000 homes in a fast-moving, unusual suburban conflagration.

Halpern and his wife Julie were safely in their car when they received a formal evacuation notice. But their house burned to the ground, taking with it cherished children’s baby books, the dress Halpern’s mother wore to their wedding and handwritten family recipes.

“Never on my retirement list was rebuilding the house and spending a lot of time with the insurance company,” Halpern told the Jewish Telegraphic Agency. “There are all of those things that we take for granted in our daily lives that you lose, not only because you’ve lost where you live, and all of the stuff that belongs to you, but because now there are demands on your time to put all that stuff back together.”

Boulder’s Jewish community’s response to the fire was immediate and substantial. JEWISHColorado, the state’s Jewish largest Jewish group, launched an emergency fund the morning following the fire, raising $500,000 from over 2,700 donors across the world.

The Boulder JCC opened its doors to those in need of a shower or workspace, and set up a cooking program with local food organizations. In conjunction with Jewish Family Service of Colorado, the organizations have provided over 130 gift cards and 45 computers to families in need.

“Where we’re able to direct our dollars is emergency funding helping people take those first one, two or three steps forward,” said JEWISHColorado President and CEO Rabbi Jay Strear. “Sometimes it’s for small items like new underwear, a suit to be able to go to work or a computer to be able to get emails. Obviously the need will be much bigger than that when clearing property sites and working towards rebuilding a home, but the need is immediate.”

Harsh weather and debris from the fire spread far beyond the houses directly affected. Rabbi Yisroel Wilhelm of the University of Colorado Boulder Rohr Chabad House said that 110 mph winds damaged Chabad’s outdoor space, causing what he said was over $30,000 in damage. Within the week following the fire, Wilhelm said he received over 400 messages of support from parents of students, alumni and community members, from a book company donating prayer books to a person in Denver offering up an extra car for someone in need.

For Wilhelm, one particularly emotional moment came when he gave donated tefillin, the leather boxes and straps used in prayer by observant Jews, to a community member whose own set burned inside his home.

“There’s a million things that get lost, but that’s something that he puts on every day,” Wilhelm said. “People weren’t waiting around trying to figure out what could be done. The ability to know that someone else just sent it was the most powerful thing to me.”

Among those reaching out to Wilhelm was Devorah Feder, the Orthodox co-owner of a jewelry company founded in Denver. After donating to CU Boulder’s Chabad, she posted about the fires to her company’s 24,000 followers on social media, and in the days that followed, she received messages from Jews all over the country offering help with insurance coverage, housing and finances. It was a testament, she said, to the interconnected nature of Jewish communities.

“Even though we’re not there, our hearts are there. You know what I mean?” Feder said. “It’s a community no matter what, and we all stand together.” 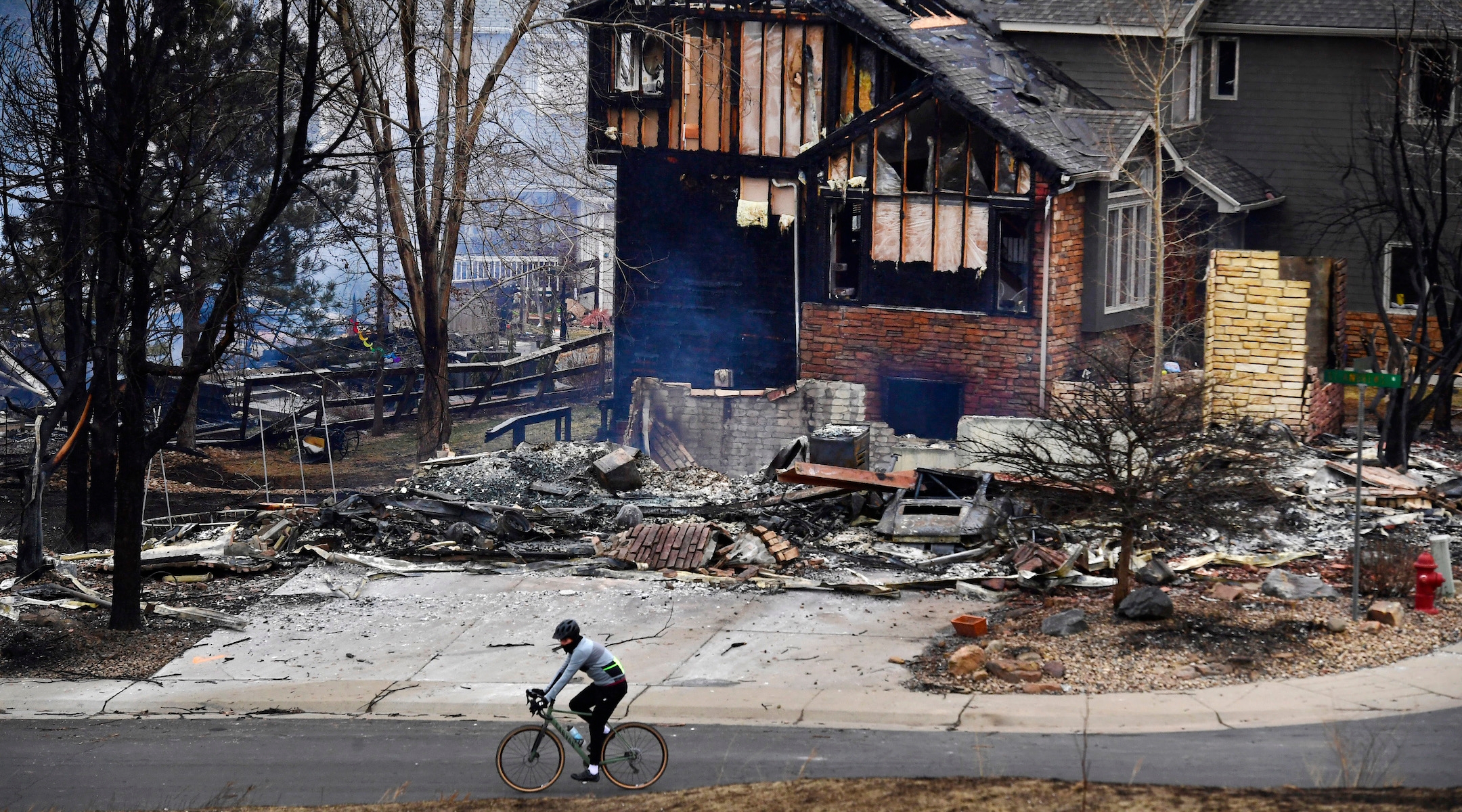 A man on a bike rides by burned homes in the Coal Creek Ranch subdivision in the aftermath of the Marshall fire in Louisville, Colo., Dec. 31, 2021. (Helen H. Richardson/MediaNews Group/The Denver Post via Getty Images)

Boulder County’s Jewish community of 35,000, which expanded from 19,000 over the past 10 years, is one of the fastest-growing Jewish communities per capita in North America. The fires there follow a year in which Boulder experienced a devastating supermarket mass shooting in March and saw housing and job crises exacerbated because of the pandemic.

For Boulder JCC Executive Director Jonathan Lev, the tragedy is a paradox of devastation and the ongoing strength of Boulder’s Jewish community.

“The scale of this is just mind-boggling. There’s not a person living in Boulder County that didn’t know someone impacted,” Lev said. “It’s been a really hard year. Our community has suffered and there’s a lot of trauma here, but it also has demonstrated the power of people connecting with one another and their resiliency.”

In addition to the immediate concerns for people whose homes were destroyed or disrupted, the fire has also renewed attention to the effects of climate change on communities like Boulder’s. Scientists have said the Marshall fire’s unusual winter timing is the result of a long-term drought and warmer temperatures.

“Climate change isn’t something that can be ignored,” said Anna Wexler, who was visiting Boulder from out of town when her childhood home in nearby Superior, Colorado, burned during the fire.

“Louisville and Superior are not rural mountain towns, they’re normal neighborhoods, and when a few houses caught on fire, a thousand people lost everything,” she said. “I never thought that those things would happen so close to home, and so close to so many people that I care about, so I think that people need to be more aware that these problems can happen anywhere.”

Moving forward, Lev said the biggest challenge will be finding housing for those who have been displaced from their homes or lost them permanently.

“There was already a significant housing challenge in Boulder County, and it’s only been exacerbated by this. Beyond immediate housing needs is the question of what medium and longer term housing looks like because the recovery efforts are going to take years to rebuild homes,” Lev said.

The fire has shifted Halpern’s immediate retirement plans, but like many in the community, he emphasized the importance of finding moments of normalcy in an otherwise unprecedented time. Having planned to lead Torah study on his first Saturday back in town following retirement, Halpern spent the morning of Jan. 8 talking from a friend’s house to more than 30 Har Hashem congregants about the week’s Torah portion.

“It just happened that I was in a different room and on a different computer than I would have been if the fire hadn’t happened,” Halpern said. “This is something that I wanted to do for months, and I wasn’t about to let the fire win.”

That week’s portion, Parashat Bo, deals with the last three plagues — picking up right after fire — that God sent to afflict Egypt and the beginning of the Israelites’ wandering in the desert after being liberated. Halpern said he saw resonance with what had happened to him and his community.