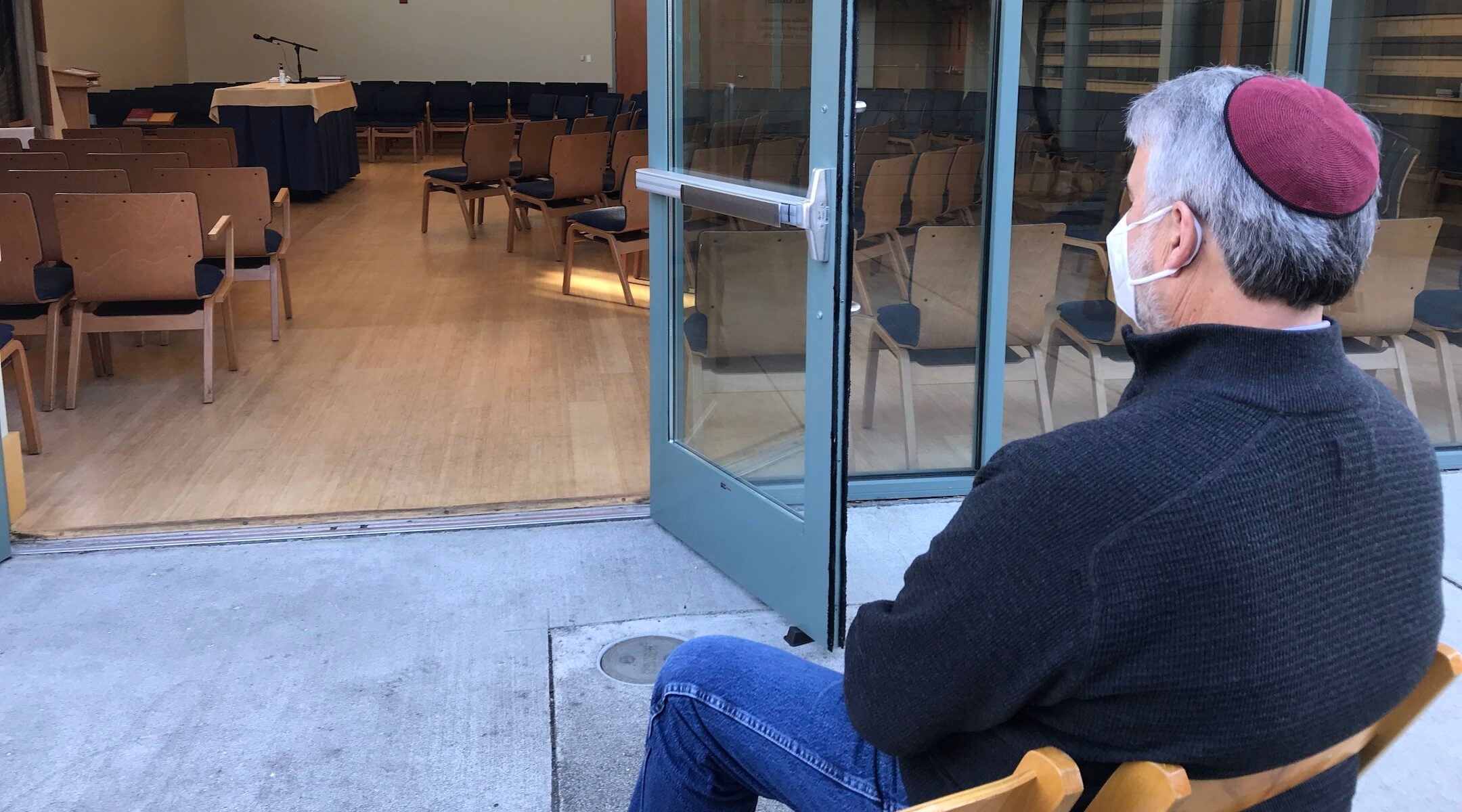 At Congregation Netivot Shalom in Berkeley, California, congregants can sit inside the sanctuary, in an adjacent outdoor space, or attend virtually on Zoom. (Courtesy of Netivot Shalom)
Advertisement

(JTA) — As she sought an image to illustrate how her synagogue has fared recently, during the worst case counts of the COVID-19 pandemic, Rabbi Heidi Hoover landed on a line from a famous movie.

“I quoted ‘The Godfather’ in one my newsletters: ‘Just when I thought I was out, they pull me back in,'” said Hoover, who leads Beth Shalom v’Emeth, a Reform congregation in Brooklyn.

She was referencing a scene in “The Godfather: Part III” in which an aging Michael Corleone confronts the impossibility of escaping his life in the mafia. But facing the reality of the Omicron variant, rabbis and their congregants across the country could be forgiven for identifying with a burnt-out mob boss.

Nearly two years ago, when the pandemic hit the United States, synagogues were lauded for rapidly moving their entire slate of programming and worship online, and for finding ways to connect with congregants in a world where few were leaving their homes and many were dying.

Since then, congregations’ plans have yo-yoed along with case rates, vaccinations and variants. Orthodox synagogues, whose rabbis and members don’t use electronics on Shabbat, have largely continued meeting in person throughout the punishing Delta and Omicron waves. But Conservative, Reconstructionist and Reform synagogues, which mostly do use electricity and tend to take a more flexible approach to Jewish law, have continually had to decide whether to hold services in their sanctuaries, on Zoom or somewhere else.

With vaccinations available to everyone 5 and older, many synagogues had finally gone back to meeting in person. But Omicron’s record numbers have raised the same set of questions about safety, social distancing and the complications of virtual worship yet again.

In contrast with the pandemic’s early days, non-Orthodox synagogues are now far from united in their approach. Some congregations, like Hoover’s, are once again back to Zoom services while rates spike. Others are staying in person, sometimes in an attempt to show that communal experiences can be safe in a post-vaccine climate. Others yet are attempting some kind of a mix.

For virtually everyone, the moment is laced with anxiety, freighted with ethical questions and comes with a feeling of whiplash.

“We were all set to have everybody back in the building at the same time and all of that, and then, Omicron,” Hoover said. Describing a synagogue committee meeting in late December, she added, “The meeting was originally going to be, ‘How are we going to reset the schedule and have everyone come back to the building at the same time,’ and it became instead, ‘What are we going to do about Omicron?'”

The synagogue decided to again go online-only for the month of January, then reassess.

Others have looked at their vaccinated congregations, along with Omicron’s decreased severity, and decided to accept the risks that accompany meeting in person with masks. At the Conservative Congregation Netivot Shalom in Berkeley, California, worshippers have three options: they can pray either inside, in an outdoor space that the sanctuary opens into, or virtually — via a camera set up at the back of the sanctuary. The camera is inconspicuous, said Rabbi Chai Levy, “to have it feel Shabbosdik,” or in the spirit of Shabbat. Due to Omicron, the synagogue has asked everyone who attends in person to wear a high-grade mask.

“Our community is very safe, we have a very high level of people vaccinated, boosted, people understand the importance of wearing masks,” she said. “Between that and the fact that we have lots of air and space in our sanctuary, and we have options for outdoor seating, and people can participate remotely, I feel good about giving people choices. I don’t think any of our choices are unsafe. We are following the guidelines of our COVID response team.”

At the opposite side of the spectrum is Temple Shalom Emeth, a Reform synagogue in Burlington, Massachusetts. The synagogue has suspended in-person prayer during Omicron and is offering pre-recorded services that are arranged and uploaded to YouTube by Rabbi Susan Abramson.

“Sure, most people are going to be asymptomatic or just feel like they’ve got a bad cold, but we’re in the middle of the height of the pandemic right now,” she said. “Who knows what underlying condition somebody might have? We have people who are seniors in our community who might think it’s not a big deal, and then they come and they get it and it is a big deal.”

Unlike other congregations, which pivoted to Zoom services in lieu of meeting in person, Abramson prefers to upload entire services to video that she edits and produces herself. Abramson has training in video production, and says this way she can offer a higher-quality service that people can tune into at their convenience.

“Every time I see a Zoom service and the music is off-kilter, it’s just not in sync with the person singing, I can’t handle the quality level of that,” she said. “I now have a whole bunch of congregants who watch the service while they’re having Shabbat dinner. That never happened before. When it’s live-streamed, it cuts off the ability of families with younger kids being able to participate.”

Rabbi Diana Miller, whose Reconstructionist synagogue decided to go all-virtual during the Omicron wave, nonetheless feels that this isn’t a repeat of Spring 2020, when it felt like there was no end in sight. Now, she’s viewing the shift as a temporary measure during a spike.

“Right at the moment it actually felt to me like a relief because I was getting really worried about transmission, and also knowing that it was going to be more certainly more temporary just because the vast majority of our congregation is boosted,” said Miller, of Kehilat Hanahar in Bucks County, Pennsylvania. “Because I have all that in place, I feel like it’s very different than when we went online in the past and had no idea when we could safely come back.”

No matter their choices, rabbis said their memberships have been mostly supportive. People are used to changes in restrictions at this point, they said, and trust that the synagogue is making thoughtful decisions.

“I understand and I’m sympathetic to people who have emotions around whether they’re physically present or back on Zoom,” said Rabbi David Small of the Emanuel Synagogue, a Conservative synagogue in Connecticut. “What’s worked for me as a leader is to say, we’re not going to focus on the location of the service, we’re going to focus on the tone or the content of the service.”

He said that he tells families approaching a bar or bat mitzvah, “I can’t predict what’s going to happen in three months. I can’t tell you for sure if it’ll be in your living room, in the sanctuary or totally on Zoom, but what I can tell you is it’s going to be great.”

Rabbi Matt Reimer, who was hired remotely to serve Congregation Beth David in San Luis Obispo, California, from his home in New York City, had a similar experience recently. He was going to fly out to teach in-person at the congregation, but then had to cancel. He’d tested positive for COVID.

No one was surprised by the cancellation, said Reimer, who’s feeling fine now.

The synagogue announced, “‘Because Rabbi Matt can’t come this weekend, we’re going to do Torah Talk over Zoom rather than in person,'” he said. “And nobody batted an eye.”