An Ohio university’s Holocaust Studies center is in jeopardy. These people are rallying to save it. 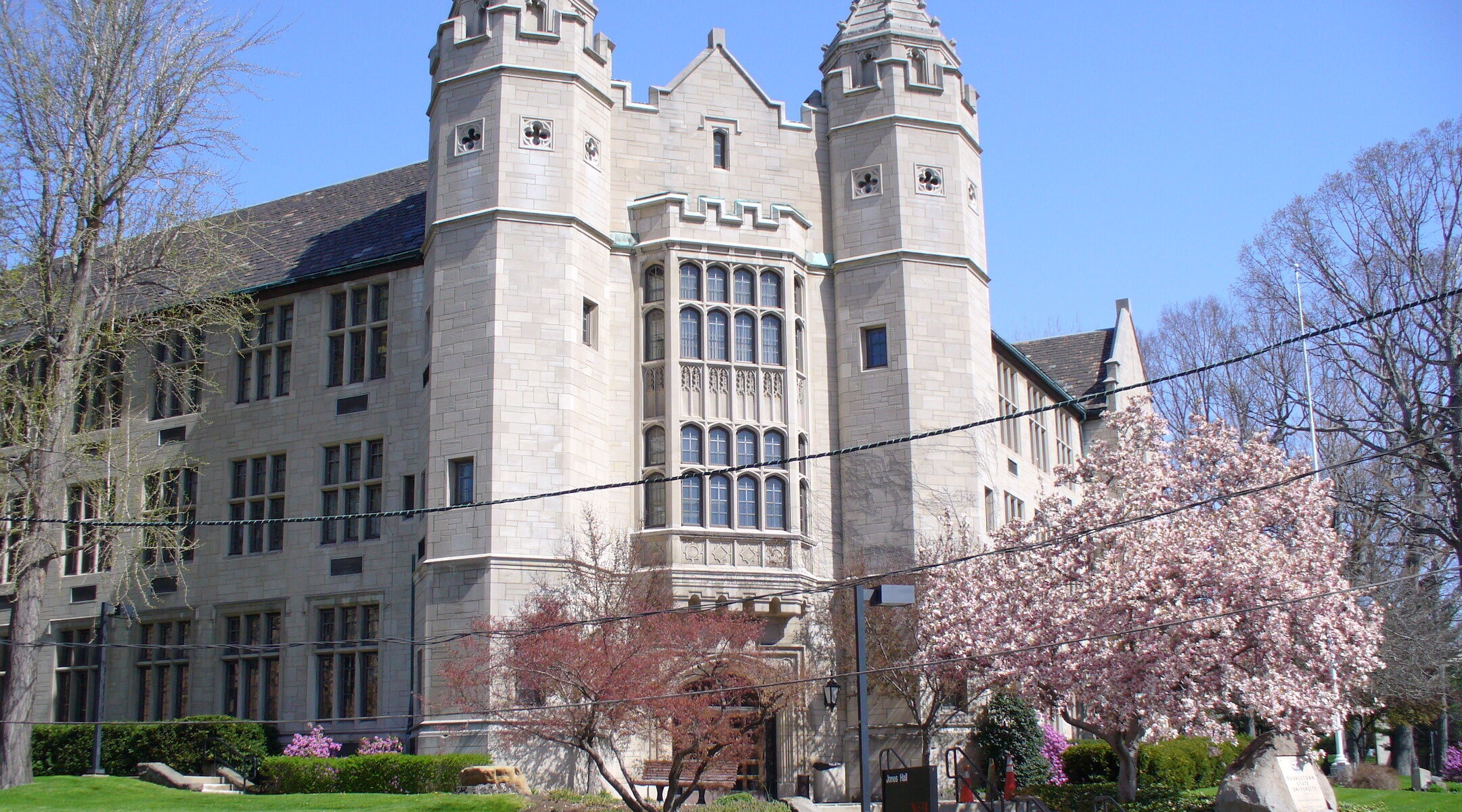 (Cleveland Jewish News via JTA) – For the nearly 13,000 students at Ohio’s Youngstown State University, Jacob Ari Labendz is the face of Jewish studies.

The history professor, who came to the school in 2017, heads the school’s Center for Judaic and Holocaust Studies. This year, he’s teaching three of its six courses. He has led student trips abroad and brought other scholars to YSU.

So when the university told Labendz in November that it was eliminating his position in an effort to cut costs, YSU students who have learned from him were alarmed. While the university has said it plans to maintain the center, which has a $750,000 endowment, it is also laying off another professor associated with it and has not named a successor to Labendz to lead it.

“If there is no education or understanding of the Holocaust, the past is doomed to be repeated,” history graduate student Brooke Bobovnyik said at a rally to oppose the cuts on Wednesday. “None of this should be allowed to occur. … Dr. Labendz is needed now more than ever.”

Bobovnyik was reading from a letter she wrote to the university administration, one of 15 that were included in a 160-page packet that she and a fellow student gathered in support of Labendz and delivered after the rally. Also included was a petition with 903 signatures.

“It’s cold out, but you’ve warmed my heart and hopefully have started something of a fire,” Labendz told supporters at Wednesday’s rally in front of the university’s administration building. “We’re here because we know that the Center for Judaic and Holocaust Studies continues to contribute importantly to this community.”

The situation at YSU offers a window into the tenuous state of Jewish studies at many universities. It also raises questions about the role of Jewish and Holocaust studies at a time when reports of antisemitism are increasing. 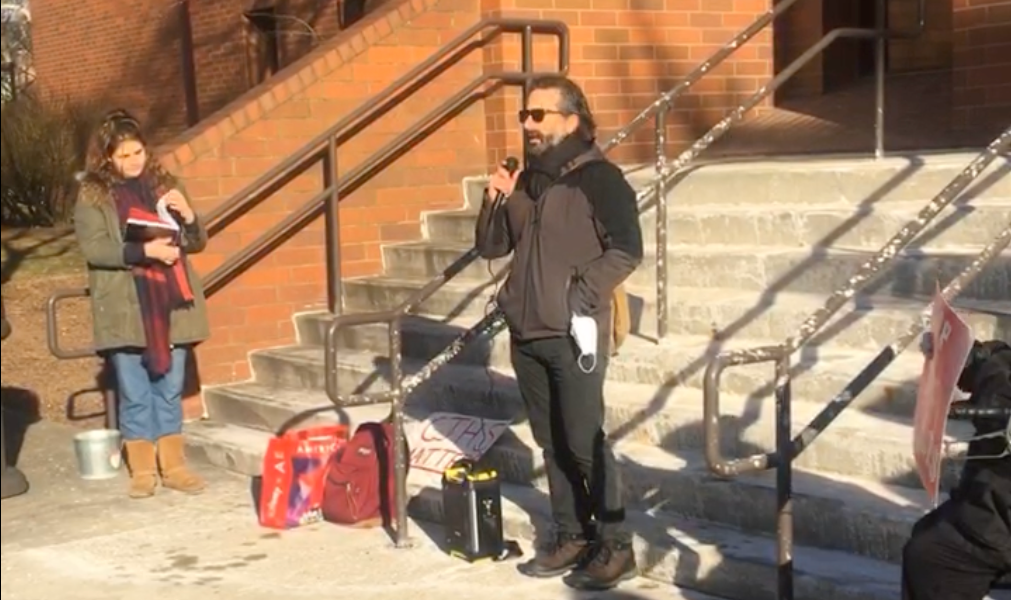 Dr. Jacob Ari Labendz, director of Youngstown State University’s Center for Judaic and Holocaust Studies, speaks at a campus rally in support of the center, Jan. 12, 2022. Citing budget cuts, the university is planning to eliminate Labendz’s position with no plans to replace his role. (Screenshot via Facebook)

An unprecedented, pandemic-induced decrease in student enrollment in higher education is putting financial pressure on colleges and universities across the country. At YSU, where a sharp decline in enrollment caused an estimated more than $5 million loss of revenue from tuition and fees in 2021, administrators targeted nine faculty positions in their cost-cutting efforts.

Labednz and Mustansir Mir, a professor of Islamic Studies who teaches a course on Judaism, Islam and Christianity and helps lead a Muslim-Jewish dialogue program, were among them.

Labendz, whose position was tenure-track but renewed annually, has appealed his position’s nonrenewal while also embarking on a taxing academic job search and organizing a symposium about contact among Jews across Cold War boundaries to take place at YSU in May. The administration will hold a hearing on his position prior to Feb. 15.

Labendz said the center is “vital” and that it “can only function with a qualified scholar at the helm.”

The student petition lists some of Labendz’s accomplishments since arriving at the university in 2017, including organizing a study abroad trip to the Czech Republic, Poland and Germany, and leading multiple student trips to the U.S. Holocaust Memorial Museum in Washington, DC. “Holocaust studies matter,” the petition reads.

It also expresses doubt that YSU can maintain the center after its director’s departure.

“Though the university claims Dr. Labendz’s non-reappointment does not guarantee the closing of the CJHS, there are no other professors at YSU who are qualified to run it,” the petition reads.

Ron Cole, YSU’s director of communications, acknowledged the students’ efforts but said the university remained committed to the center.

Academic associations are paying attention to the saga at YSU, which comes as universities increasingly retain academic faculty on short-term contracts and as students across the country increasingly turn away from liberal arts courses.

The American Historical Association issued a letter on Labendz’s behalf. So have the Association for Jewish Studies; the Consortium of Higher Education Centers for Holocaust, Genocide, and Human Rights Studies; the Ohio Academy of History; and other individuals, the professor said.

The Youngstown Area Jewish Federation and the Islamic Society of Greater Youngstown issued a joint letter advocating for both Labendz and Mir to be retained.

“I lament what’s going to be lost,” Labendz said, listing some of the programs the center hosts, including the Jewish-Muslim forum, the emerging scholars lecture series, a faculty-led study abroad program and a travel grant for scholars to come to Youngstown to research the archives of Youngstown’s Congregation Rodef Sholom. Recipients of that travel grant would deliver a public lecture related to their research.

A letter from the Ohio Academy of History tied Labendz’s position to recently recorded antisemitic incidents in the Youngstown area.

“Considering the Youngstown Jewish Community Center has been repeatedly targeted by bomb threats, including one as recent as Nov. 16, 2021, we argue that Dr. Labendz plays a critical role in generating awareness about the historical roots of racism, antisemitism and violence which is particularly relevant not only to YSU students, but to the greater Youngstown community,” the group wrote. “By engaging in these important topics, the programs bring a wider community audience to the university. We stand together in decrying the dismissal of Dr. Labendz and urge the reconsideration of this decision.”

Mark Vopat, a YSU philosophy professor who is also the faculty union spokesperson, told InsideHigherEd that recent news reports about public figures comparing COVID-19 vaccination measures to the Holocaust were further evidence of the importance of Holocaust studies.

“These are things students should have access to,” he said.

A version of this story first appeared in Cleveland Jewish News and cjn.org. It is reprinted with permission.