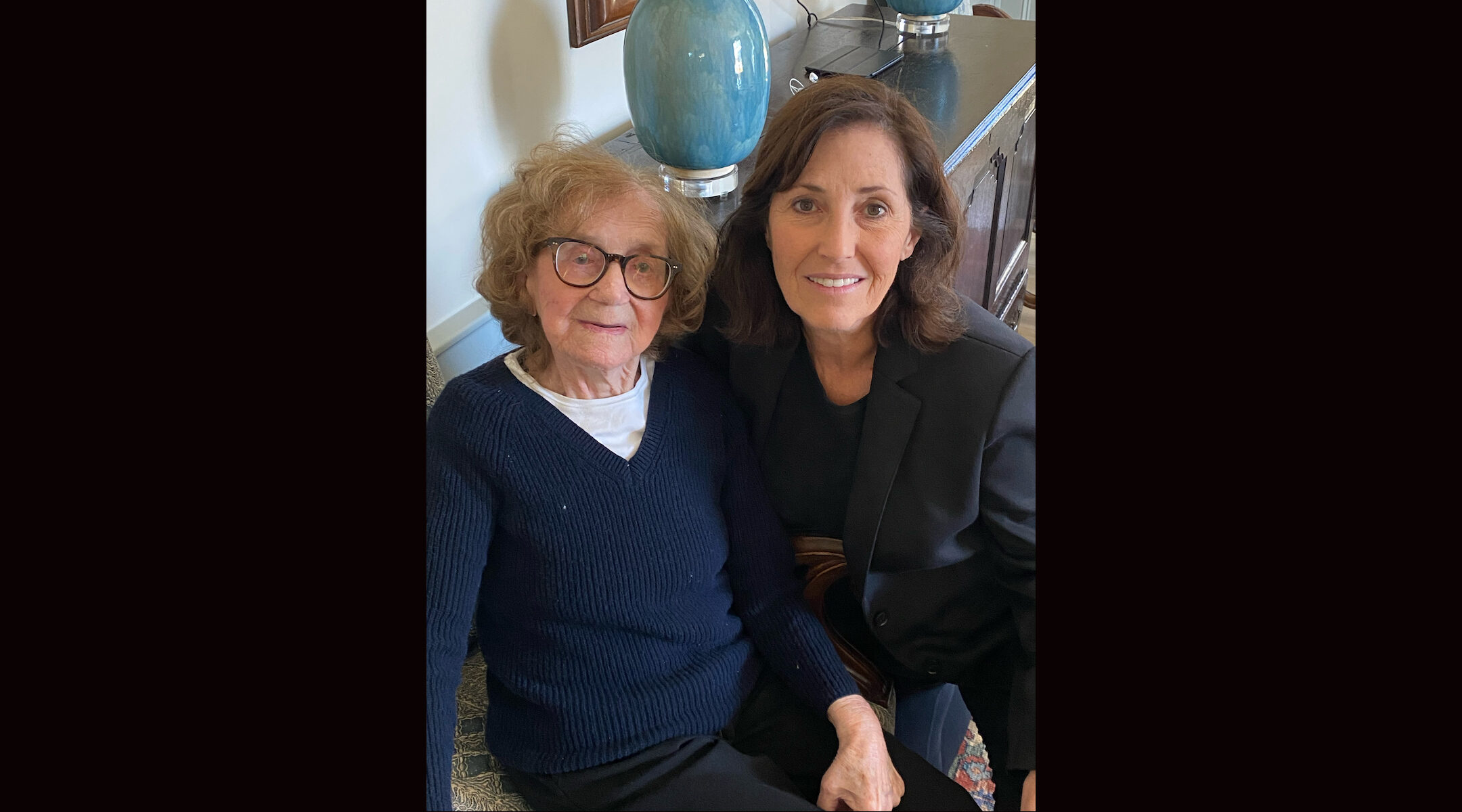 (JTA) — Jews around the world reacted with horror to last weekend’s hostage situation at Congregation Beth Israel in Colleyville, Texas. But Anna Salton Eisen had a deeper connection to it than most.

Eisen was a founding member and first president of the congregation, and when her fellow congregants told her what was happening on the Facebook livestream around 11:30 a.m. CST, she knew she had to alert her mother, a Holocaust survivor.

“I knew I had to tell her, so it was hard,” Eisen told the Jewish Telegraphic Agency. “My voice broke when I had to say the words: ‘A gunman has taken over our synagogue and is holding the rabbi and others hostage.’ And I saw it in her eyes: the pain, the fear, the memories.”

Eisen’s mother, Ruth Salton, turns 100 on Saturday. Her father, George, also a Holocaust survivor, died in 2016; Eisen co-authored a 2002 memoir with him and is working on a documentary film based on his life.

Like the rest of the congregation, Ruth Salton “kept vigil all day, waiting for good news,” her daughter recalled. “It was a very difficult thing to go through, to know that this could touch our community and also her life … She’s been through so much, and you just want to feel safe and not quite as vulnerable as I think we all realize that we are after that day.”

Eisen, who moved to Texas in 1984, said her parents were instrumental in inspiring her to help start Beth Israel. “In 1998, I had gone to Poland with my parents — my father had been in 10 camps,” she said. “And I came back and realized, you know, in Poland, there’s a lot of synagogues and no Jews. And here I lived in a place with some Jews and no synagogue.”

Beth Israel began later that year as an informal gathering of 25 Jewish families in the Fort Worth area; that number has since grown to 150. A physical building and the hiring of Charlie Cytron-Walker as its first full-time rabbi in 2006 have accompanied the congregation’s growth.

Over the years, Eisen has held almost every synagogue leadership position. She has also continued her Holocaust research. In October, she used genealogy findings to organize a reunion of family members of Holocaust survivors. She also has a second memoir, “Pillar of Salt: A Daughter’s Life in the Shadow of the Holocaust,” scheduled for publication in April (co-written with her son, Aaron).

“There’s similarities and there’s differences,” she said. “The similarities are the tropes and, you know, the thinking that Jews have control and all these other myths and misconceptions and stereotypes that are out there.

“The difference is that the Holocaust was a government-sponsored systematic destruction of a people. And I have to say that people have asked me, ‘Are you more afraid now?’ And I’m like, ‘No. I feel, really, better.’ Because I know that if I’m in trouble, they’re coming to help me.”

Eisen pointed to how Colleyville’s chief of police told the press that Cytron-Walker is a close personal friend of his. “You didn’t hear that in the Holocaust,” she said.

Though she is not currently in a synagogue leadership role, Eisen sat next to Cytron-Walker on the makeshift bimah at a special “Service of Healing and Resilience” that Beth Israel staged on Monday. Held at a local Methodist church and streamed live on Facebook, the service was accompanied by local cantors singing several prayers familiar to those in the Reform movement, including Debbie Friedman’s arrangement of “Mi Shebeirach” and Dan Nichols’ of “Esah Einai.”

As he addressed his community, tearfully expressing gratitude “that no one will be saying Kaddish Yatom for me, or for any of us, the Mourner’s Kaddish this evening,” Cytron-Walker offered an affirmation of his own. He invited everyone gathered in attendance, regardless of religious affiliation, to repeat his words: “We stand together against hatred, bigotry and violence. We stand together in love and support of each other. We stand together in words and deeds. We stand together understanding that our actions matter.”

Being onstage with the rabbi “was wonderful. It was really life-affirming,” Eisen said. “It was just great to give him a hug and be near him.”

As a sign of unity, a push is underway for Jews to convene for in-person worship this upcoming Shabbat, led by figures such as President Joe Biden’s State Department antisemitism envoy nominee, Deborah Lipstadt. That won’t be possible within Congregation Beth Israel itself: The synagogue remains an active crime scene, and the building sustained damage during the events of the night. currently there is no timeline on when it might be reopened as a worship space.

But even when the building reopens, Eisen said, the congregation will need to have a conversation about how to reintroduce its members to the space. A licensed therapist, Eisen said her congregation is only just beginning its long journey to healing.

“How do we make that reentry into something that’s healing and positive?” she said. She will also be mindful of “what to expect as we go through, you know, those first times being back as a congregation, especially for the children. We have to be concerned with how they are processing and handling this.”

Area school counselors have already begun reaching out to her, ready to help engage in the healing when the congregants are ready. And Eisen thinks that day will come soon.

“We’re getting there,” she said. “We have to process. We are just beginning that — not just what happened, but how we feel — and the healing can take a long time. Other things can trigger it, and then we have to go forward and integrate this episode into our congregational history.”

“Is this now something we will be known for?” she asked. “Is this something you can get over, forget about? I’m just not sure. But we appreciate all the support.”