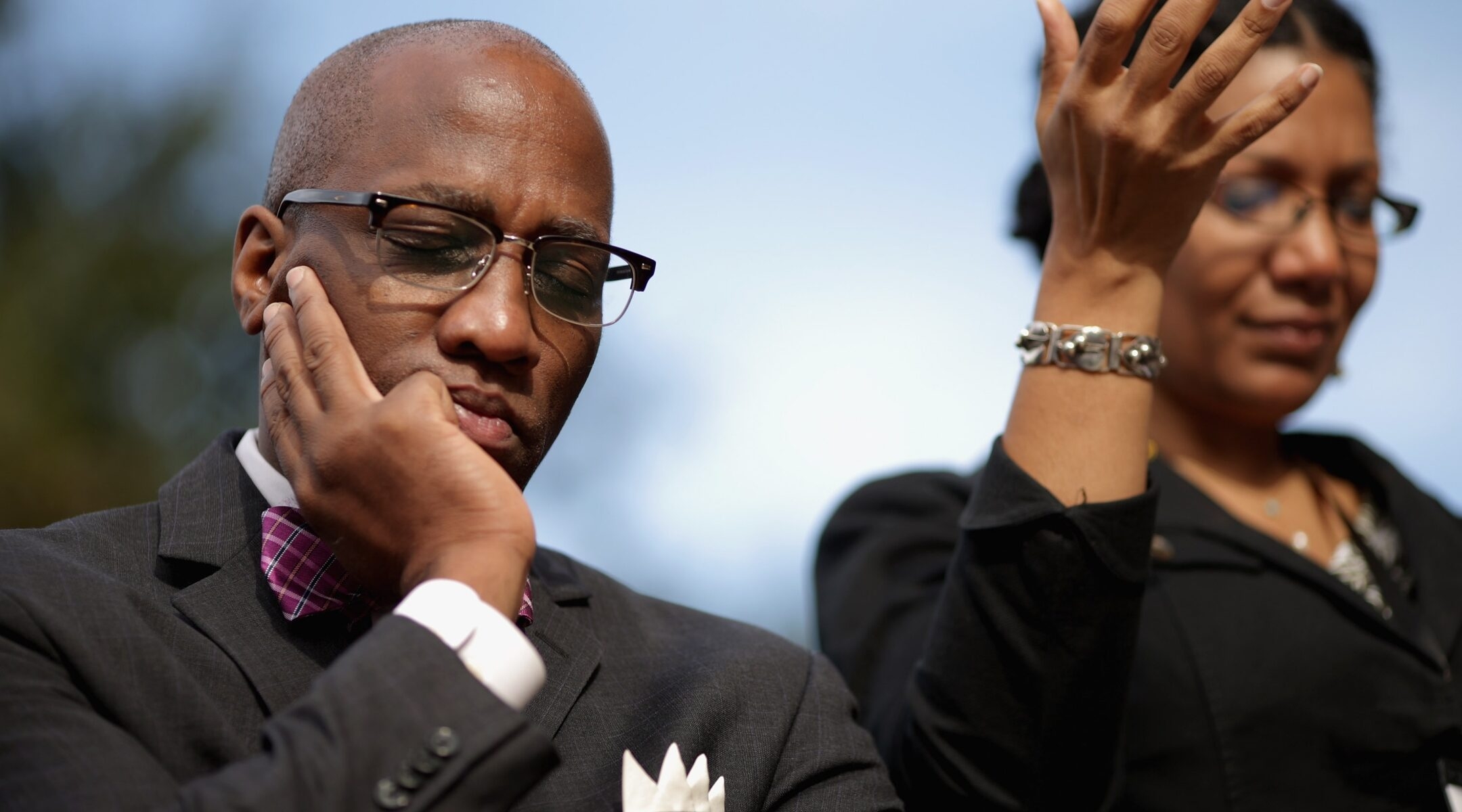 Rev. J. Herbert Nelson, then the director of the Presbyterian Church Office of Public Witness, at a prayer service outside the United Methodist Building on Capitol Hill, Oct. 8, 2013. (Chip Somodevilla/Getty Images)
Advertisement

(JTA) — U.S. Jewish groups slammed a top Presbyterian Church official for Martin Luther King Day remarks that equated Israel’s West Bank occupation with slavery and implied that American Jews have the influence to get the U.S. government to end it.

“The continued occupation in Palestine/Israel is 21st-century slavery and should be abolished immediately,” Rev. J. Herbert Nelson, II, the stated clerk of the Presbyterian Church USA said in remarks released Monday.

“Given the history of Jewish humble beginnings and persecution, there should be no ambiguity as to the ethical, moral, and dehumanizing marginalization and enslavement of other human beings. The United States of America must be a major influencer of calling this injustice both immoral and intolerable,” said Nelson who is the senior-most ecumenical officer in the church. “I would also hope that the Jewish community in the United States would influence the call to join the U.S. government in ending the immoral enslavement. Dr. King continuously preached a Gospel of justice, so that all people could live in dignity.”

An array of Jewish groups condemned the remarks, noting that they appeared to invoke tropes about disproportionate Jewish influence just days after a gunman who had internalized similar antisemitic theories held a rabbi and three congregants hostage at a Texas synagogue.

The JCPA, the Jewish community’s public policy umbrella, routinely engages with the Presbyterian and other churches. In its statement it noted the church’s pro-Palestinian activism in recent years.

“We understand that the Presbyterian Church USA has been an advocate for the Palestinian cause,” the JCPA said. “We urge them to engage in a constructive manner that does not spread misinformation and put already marginalized people further in harm’s way.”

The JCPA statement called Nelson’s remarks “antisemitic” and said that was “made even more clear by his failure to mention any other serious human rights abuses, such as the ongoing genocides against the Uyghurs and Rohingya.”

Americans for Peace Now, a harsh critic of Israel’s actions in the West Bank, said it was “disappointed at the gross mischaracterization of the occupation, and concerned about the potential repercussions of Rev. Nelson’s hyperbolic speech.”

“Having opposed it for more than four decades, we at APN would be the first to acknowledge that the occupation is wrong, unjust and corrupt,” its statement said. “But it is not slavery. It’s occupation, and this occupation is not taking place ‘in Palestine/Israel’ but rather in territories that are not sovereign Israel, territories that the US government and the international community believe should become the future state of Palestine.”

Also condemning the remarks was Presbyterians for Middle East Peace, a group that has worked closely with national Jewish groups to counter anti-Isael bias within the church and preserve the church’s support for a two-state outcome to the conflict.

The group condemned the national church body for not speaking out about the Colleyville attack, while allowing Nelson to single out Israel for criticism.

“The Rev. Dr. Nelson‘s actions in lashing out at the U.S. and global Jewish community is beyond the pale,” it said. “Gratefully, his actions and words do not match the work of local PCUSA and Jewish congregations in communities across the nation. At the grassroots, Presbyterians work for justice alongside Jews, rather than engaging in polarizing polemics.”