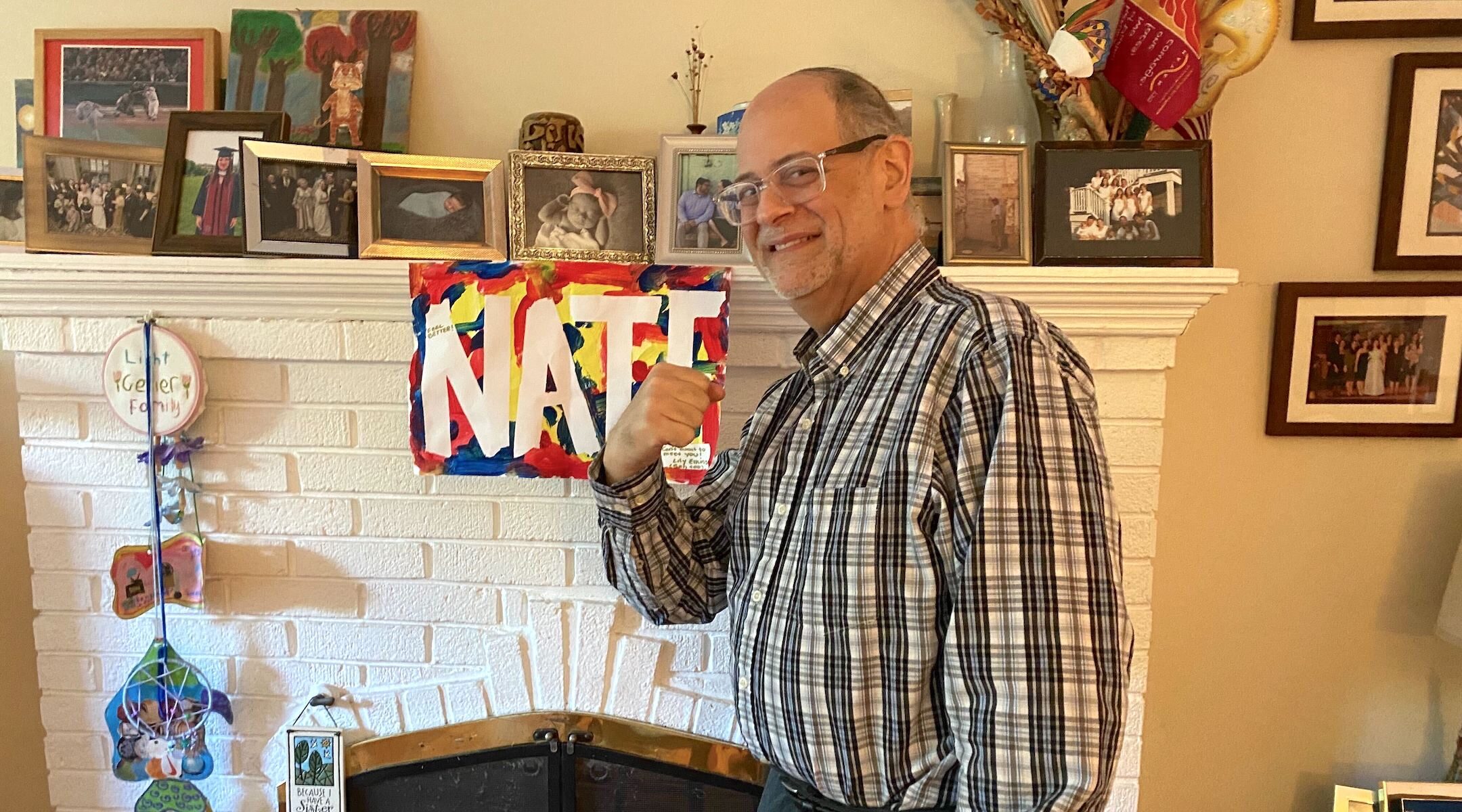 Nate Geller, at his home in Teaneck, New Jersey. A colleague's daughter made the "Nate" sign, which he took home and hung on his mantel. (Courtesy)
Advertisement

(JTA) — If you ever visited our offices at 70 Faces Media — when people still went into offices — the first person you were likely to see was Nate Geller.

Officially, Nate was a director in the fundraising department, but unofficially he was perhaps the biggest fan of a company dedicated to telling the Jewish story through journalism and an array of educational resources and programs. Nate wouldn’t just sell the nonprofit’s work to potential donors — he’d press Jewish Telegraphic Agency articles onto friends, recruit subscribers for My Jewish Learning’s daily Daf Yomi newsletter, or try out a (vegetarian) recipe he’d found on The Nosher.

So it was fitting, and typical of Nate, that he was usually the first in the office, and the first to greet people from his perch opposite the front door. As a colleague, JTA editor Philissa Cramer, put it, “To my mind, he is the archetype of what I want our readers to be like: widely interested, passionate about the communities we cover, coming to us with insights and ideas, compassionate about the challenges of a daily newsroom but having high expectations for our work and always trying to be an ambassador for it in the world.”

Nate passed away on Jan. 24 at age 63, after a struggle with leukemia that he faced with his characteristic humility, faith and optimism. His death was a blow to his colleagues at 70 Faces, to his synagogue community in Teaneck, New Jersey, and to the Jewish communal world to which he had dedicated his life since graduating from the Hornstein Program in Jewish Communal Service at Brandeis University in 1983.

In the hours after his death, chat rooms and email boxes filled up with loving tributes to Nate, remarkable for their consistency: Friends and colleagues remarked on his gentleness, his passion for Jewish learning, his commitment to Israel, his willingness not just to hear but to listen when a colleague kvelled or kvetched. Most of all, they remembered his devotion to his family: his wife Lyn Light Geller, herself a gentle and passionate force among “Jewish professionals,” his grown children Aliza, Ariana and Koby, Koby’s wife Talia, and their kids, Annaelle and Judah.

A proud son of Pittsfield, Massachusetts (and a devoted member of Red Sox Nation), Nate lived and breathed the Jewish community that he began serving as a teen as a member of United Synagogue Youth. After graduate school he staffed the Young Leadership division at the Jewish federation in Miami, and pivoted to become the director of Camp Tel Yehudah, Young Judaea’s national teen leadership camp. In the 1990s he was recruited for work at the National Conference on Soviet Jewry, spending the decade after the fall of the Soviet Union arranging partnerships between emerging Jewish communities there and Jewish communities back home.

Later he became director of foundation relations for The Abraham Initiatives, promoting Arab-Jewish coexistence, and executive director of the North American campaign for the Schechter Institute of Jewish Studies, the Conservative movement’s academic institution in Jerusalem.

Nate was forthright about a Jewish communal field that could be volatile and unforgiving when fundraising declined. In 2020, when the pandemic was forcing Jewish organization to slash budgets and staff, Nate wrote a piece for eJewish Philanthropy recounting the ups and downs of his own career, and offering laid-off professionals exactly what you would expect Nate to offer: hope.

“Hopefully everyone has something that can help [them] find a path forward,” he wrote. “And, ultimately, if people who are unemployed realize that they need more help than they can find on their own, they should know about the therapeutic options out there for those prepared to pursue them.”

Nate joined the 70 Faces Media team in January 2017 and would call his time there “my happiest career point.” He didn’t really have to, but he took an interest in everything the company did: the reporting by the Jewish Telegraphic Agency and the New York Jewish Week, the educational programming from My Jewish Learning, the essays appearing on Alma and Kveller, the recipes from the Nosher, the marketing materials produced by the business department. If there was a meeting or party, Nate was there.

“If you’ve ever received a work email from Nate, you know how proud he was of the work we were producing and how much respect he had for his colleagues,” remembered Deborah Kolben, 70 Faces’ editorial director. “In addition to all of the regular contact information that everybody includes, Nate took the time to highlight a video, an email series, or a special project that he wanted to show off to the outside world. He was the only staff member that I ever saw do this and every time I saw it, I felt a wave of pride.”

Ami Eden, the CEO and executive editor of 70 Faces Media, said this pride that Nate took in the work of his colleagues — and the commitment he displayed in his own work — stemmed “from a deep love for and devotion to Jewish teachings and traditions, Israel and the Jewish people.”

On a personal note, I knew Nate not only as a colleague, but as part of that unique extended family that develops among the regulars at a synagogue. As Lyn and his kids noted at his funeral, their smiles apparent behind their masks, Nate was invariably one of the last people to leave the weekly kiddush at our shul, Congregation Beth Sholom in Teaneck. Nate would keep the conversation going — about baseball, about the Torah portion, about the latest antisemitic outrage — even after the social hall emptied.

Beth Sholom’s Rabbi Joel Pitkowsky is the Light Gellers’ neighbor, and on Wednesday he remembered their talks on the way home on Shabbat afternoons: “The image I have is of … trying to keep up with his conversations about whatever the subject was, because inevitably he would know more about it than I would.”

Another work colleague and fellow synagogue member, Jen Modlinger, perhaps said it best: “There is an enormous Nate-shaped void in the world now for his colleagues and even more so for his friends and family.”

At Nate’s funeral, there was a lot of talk about his love for the Red Sox, the Patriots, the Bruins and the Celtics. As Rabbi Pitkowsky said, “Nate loved all of his teams.”

As those who knew him can tell you, his teams loved him right back.