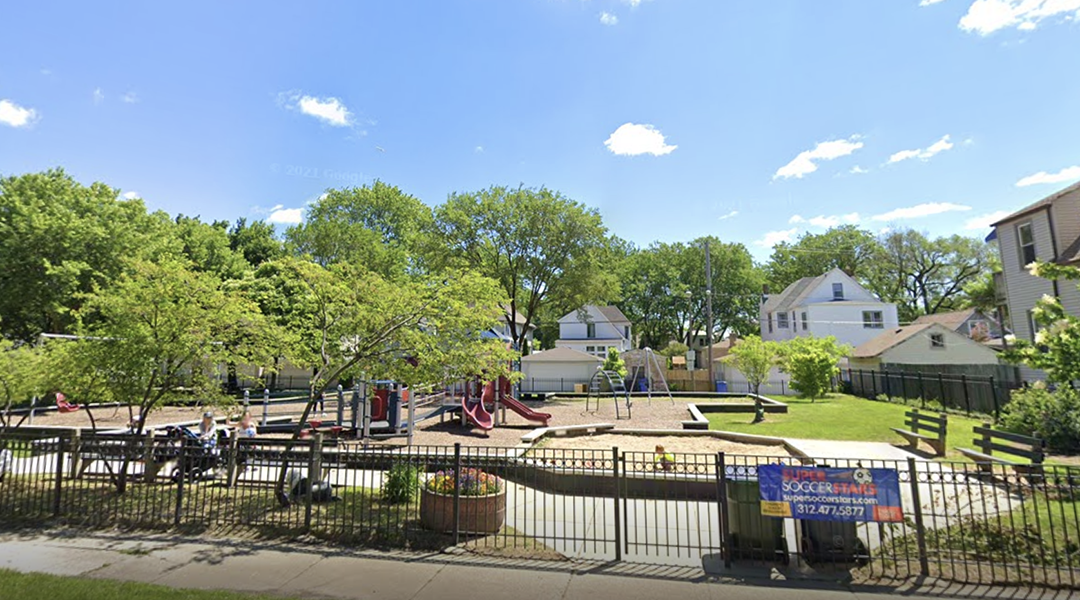 A view of Kolmar Park in Chicago. (Screenshot)
Advertisement

(JTA) — Kolmar Park in Chicago, a small green space with a playground on the city’s Far Northwest Side, is named after the street it’s on.

The street, which only stretches for a couple of blocks, is named after the small French city of Colmar, near the country’s border with Germany, according to the Chicago Park District.

But a group of locals now wants to rename the park after an unrelated German-Jewish poet named Gertrud Kolmar who died in Auschwitz, to contribute to awareness of and education on the Holocaust.

Merry Marwig created a four-person committee and submitted the idea with letters of support and a petition to Chicago’s Park District in October, Book Club Chicago reported. Commissioners from the Park District board voted to open a 45-day notice and comment period last Wednesday, one day before International Holocaust Remembrance Day.

Kolmar was actually an adopted pseudonym for Gertrud Käthe Chodziesner, born in Berlin in 1894. Kolmar is the German name for the Polish town of Chodziez, where her family originated, according to the Jewish Women’s Archive. Her cousin was the influential German-Jewish philosopher and cultural critic Walter Benjamin.

She went on to write more than 450 poems and two short novels. Three collections of her works, “Dark Soliloquy: the Selected Poems of Gertrud Kolmar,” “A Jewish Mother from Berlin: A Novel” and “My Gaze Is Turned Inward: Letters 1934–1943” have been translated to English.

She was deported to Auschwitz in 1943, and the exact date of her death is unknown.

Paul Chodziesner, Kolmar’s great-nephew who now lives in Australia, told Block Club that he “wouldn’t think twice” about coming to Chicago to celebrate a rededication. The renaming would spread his great-aunt’s work internationally and keep her legacy alive for future generations, Chodziesner said.

The public comment period will remain open until the middle of March.

“Even if you just stop for a second at Kolmar Park and read a tiny plaque that says, ‘This park is in honor of Gertrud Kolmar, well-renowned poet who was able to achieve so much in the face of adversity,’ maybe that would stop someone here in Chicago to think, ‘Wow, let’s make sure that never happens again,’” Marwig said.