In ‘The Books of Jacob,’ Polish Nobel laureate Olga Tokarczuk tells a story about Jews. But is it a Jewish novel? 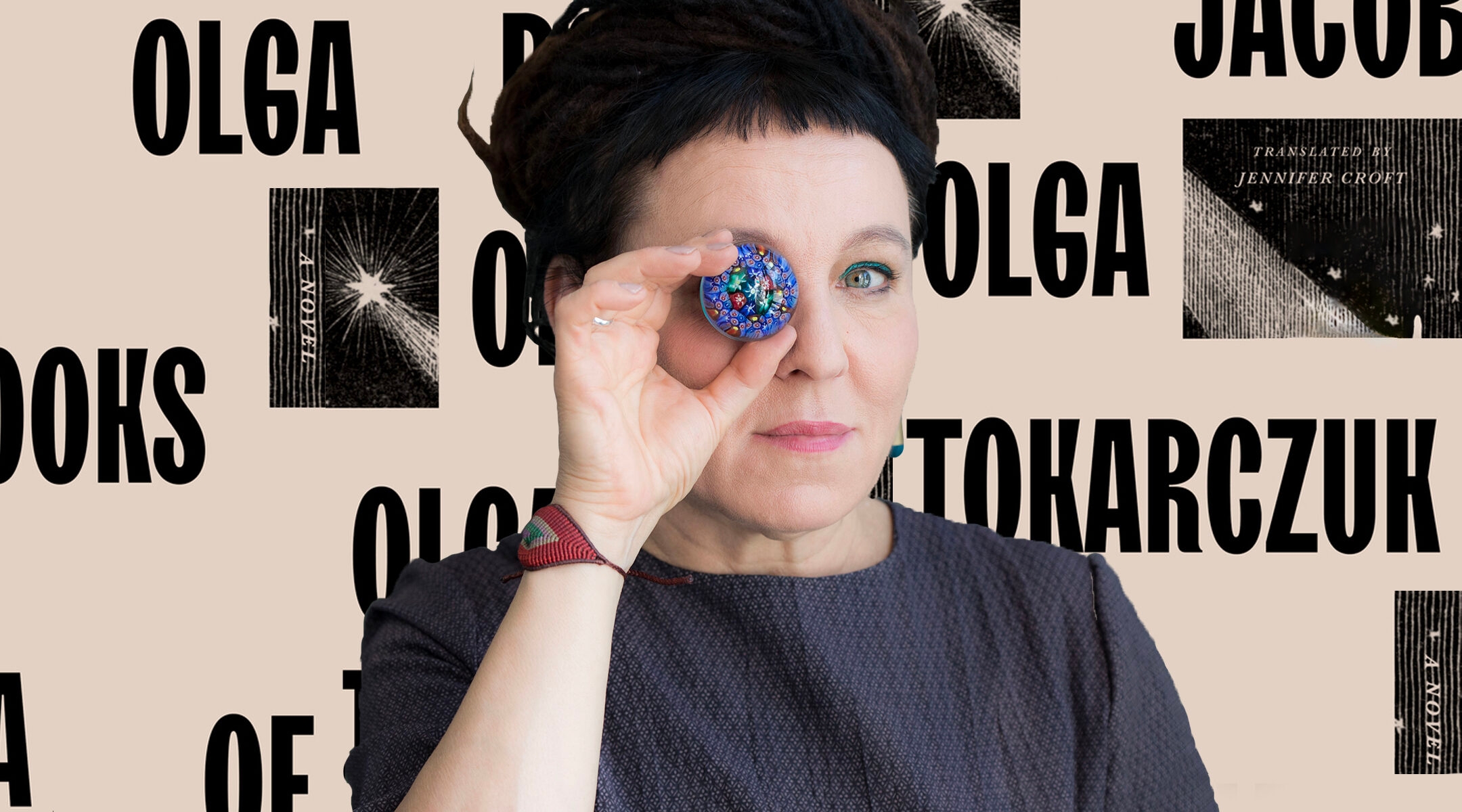 (JTA) — When Polish writer Olga Tokarczuk published “The Books of Jacob” in Poland in 2014, she drew critical acclaim from the Polish left and an intense backlash from the country’s right wing.

That reaction has only intensified in the years since, as the novel — a nearly 1,000-page journey into the life of a Jewish messianic cult leader — was translated into several languages including Hebrew, became a global phenomenon and helped win its author the Nobel Prize in Literature.

This week, the book’s English translation, by Jennifer Croft, was released in the United States, bringing the many debates over its sheer spectacle, side-eyed depiction of Poland’s attitude toward Jews, and unorthodox vision of 18th-century Jewish life to an even broader audience.

The novel’s central figure is Jacob Frank, a real-life 18th-century Jewish messianic cult leader, told through the eyes of those around him. Frank leads his followers in a rebellion against the era’s rabbinate, at one point orchestrating a mass conversion into Catholicism, as the various myths and legends of his life converge via his beholders. Mixing historical detail with an intricately developed fictional narrative, the book was immediately hailed as an important work of contemporary Polish writing.

Tokarczuk’s now-global audience has gone one step further, declaring “The Books of Jacob” to be not just a great Polish book, but Poland’s great Jewish novel. (One more critical reader has also called the experience of reading it a “thunderslog.”) But her book has also revived discussions around the creators and consumers of Jewish culture in Poland, most of whom are not Jewish themselves.

Polish scholars of Judaism see Tokarczuk, who won a Nobel Prize in Literature in 2018 largely on the strength of “The Books of Jacob,” as perennially interested in the experience of outsiders and those on the periphery of society.

“Her entire project is about recreating a world in which many different languages and cultures intersect and interact,” Croft told the Jewish Telegraphic Agency.

Marcin Wodziński, the head of the University of Wrocław’s Jewish studies department, said it is precisely this orientation that makes Tokarczuk stand out in Poland.

“She is interested in anything liminal, anything which is minority, anything that is subversive, that goes against the dominant culture. ‘The Books of Jacob’ is the culmination of this, it’s her magnum opus,” he said.

In Poland, Jewish culture is the epitome of liminal: It is both omnipresent, in the sense that Jewish cemeteries and synagogue buildings scatter the country and the Holocaust looms large, and distant. Encounters with living Jews are few and far between. This has led many intellectuals, including Tokarczuk, to become fascinated with Jewish culture.

“She was quite fascinated by Jews and Jewish culture, and its absence. This is quite common in the Polish intellectual milieu,” said Stanisław Krajewski, a Polish Jewish philosopher and professor at the University of Warsaw.

Several Polish Jewish studies professors told JTA that their classes are mostly comprised of non-Jews, and that the majority of their department is usually not Jewish. This has resulted in a kind of “close exoticism,” Wodziński said. Non-Jews are attracted to Jewish culture, in this view, because it is both readily available and mysteriously hidden.

A sign denoting the empty space where the destroyed Great Synagogue in Oswiecim, the town in southern Poland where Auschwitz was built, once stood. The space is now home to an architecturally significant memorial park. (Ruth Ellen Gruber)

For many non-Jews, this embrace of Jewish culture is a way of reclaiming a missing part of the past or understanding the legacy of Nazism. Mariusz Kałczewiak, a Jewish Polish historian, traces this phenomenon back to the early 1990s and the end of Communism. As Poland began to think more critically about its past, intellectuals found themselves drawn to Jewish culture and history.

“There is a certain identification with the Jewish experience for leftists whose political views have made them a kind of oppressed group,” Kałczewiak said.

Tokarczuk’s decision to focus on Jacob Frank was likely influenced by many of these same forces. While earlier scholars, including the scholar of Jewish mysticism Gershom Scholem, had revived interest in Frank abroad, it was not until the fall of Communism that the first modern writing on the cult leader was published in Poland. Over the next two decades, Polish writers and historians released a series of publications about Frank and the history of his movement.

Underpinning this revived interest in Frank was a broader fascination among the intelligentsia about Polish intellectual history and the potential for multiculturalism. In 2006, Tokarczuk published her first short story about Frank, which would eventually be expanded into “The Books of Jacob.” At the time, Tokarczuk was part of a group of Warsaw academics interested in historical moments that showed Poland as an open, intellectual and multicultural society — an antidote to the country’s increasingly right-wing politics. Frank, a character who shifted between Judaism and Christianity with ease, was an ideal source of inspiration.

“Polish intellectuals were interested in finding Jewish traces in our ancestries, not only because Jews were the first intellectuals in Poland, but because Frank showed that you could be Polish, Catholic and Jewish at once,” said Roma Sendyka, an associate professor of Polish studies at the Jagiellonian University in Kraków.

While Polish intellectuals are largely excited to see Tokarczuk’s novel released in English, some caution that it is important to understand the context that shaped the book. Despite being translated into English, it is still a work of Polish literature. If the book had been written by an American author amid contemporary discussions around representation, it may have been viewed differently. 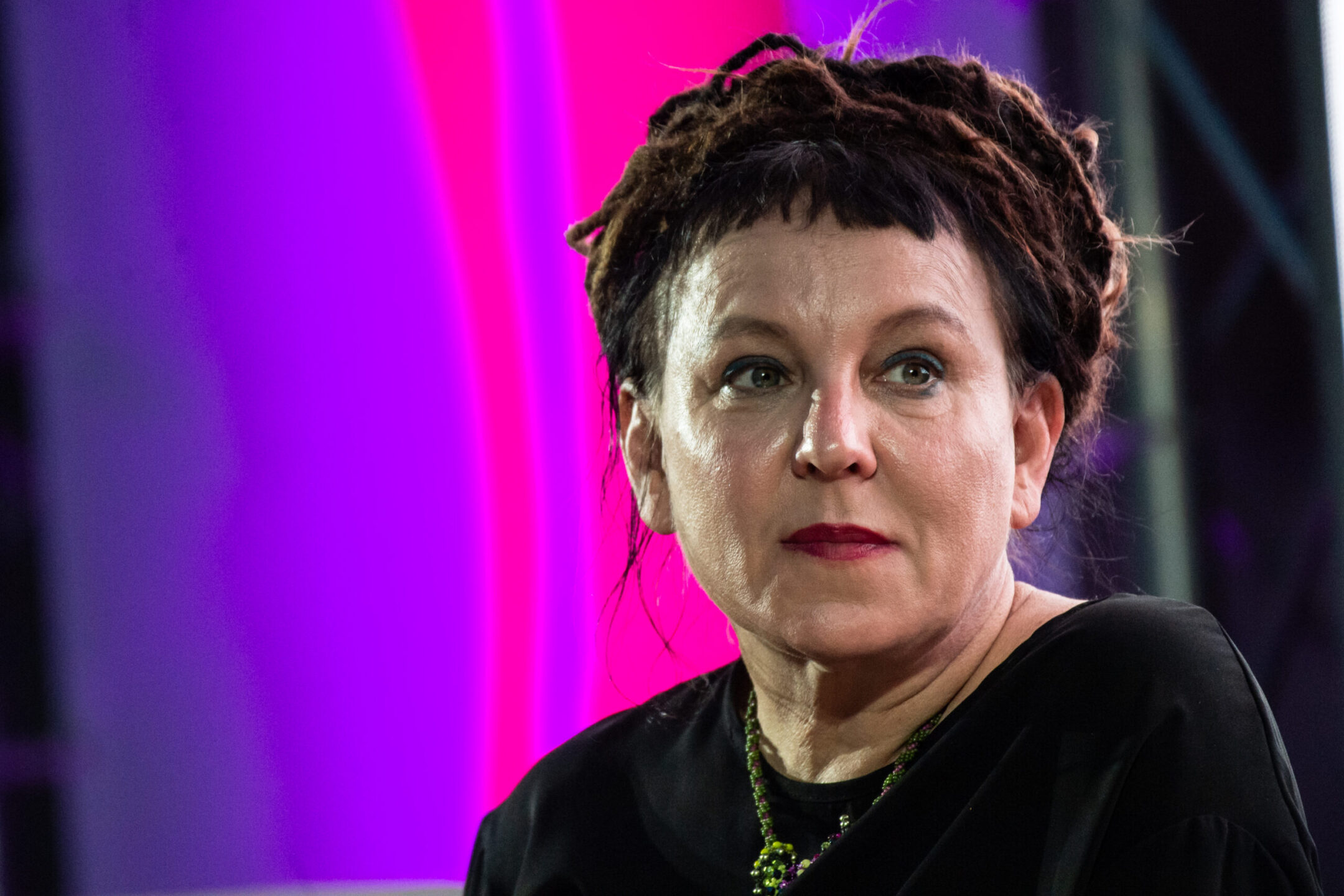 Within Poland, Tokarczuk’s book came to represent something larger than itself: an entire political ideology. Tokarczuk has always been a strong public presence in Poland, campaigning against mistreatment of minorities and the country’s turn toward the right. In an interview with Poland’s state television channel in 2015, Tokarczuk excoriated contemporary Polish society for seeing itself as “an extremely tolerant and open country,” while ignoring its role in the Holocaust and long history of anti-semitism.

In the months following the interview, Tokarczuk was vilified by the country’s right wing, which saw her as a threat to Poland’s national identity. She faced relentless death threats and accusations of traitorous behavior.

“I think that her words were inconvenient for [right-wing] people in Poland, who like to think about Polish-Jewish relations only in a positive way,” said Maria Antosik-Piela, a professor of history at the University of Warsaw. Tokarczuk brought up this uncomfortable part of Polish history, Antosik-Piela says, forcing a reckoning of sorts within Polish society.

But among Jewish intellectuals in Poland, Tokarczuk’s book prompted some ambivalence. There was near-universal acknowledgement that “The Books of Jacob” is a masterful work and a consummate example of what makes Tokarczuk’s writing so engaging. Scholars of Polish Jewish history commended the novel for its skillful blending of well-researched historical detail and fiction regarding the real-life Frankists. While writing the book, Tokarczuk consulted with Pawel Maciejko, a professor at Johns Hopkins University who is considered the world’s foremost scholar on Joseph Frank and who also assisted Croft on the English translation.

The attention to detail does not always translate into a native fluency in Jewish culture. When an excerpt from “The Books of Jacob” appeared in the New Yorker last fall, some readers noted a prominent character named Shneydel — a name that sounds Yiddish, but isn’t actually. It seemed likely that Tokarczuk had meant to use the name “Sheyndel,” a common Yiddish name. “This is an embarrassing mistake,” one reader wrote on Twitter. “It’s like writing a Muslim character as Amhed instead of Ahmed.” Croft consulted with Maciejko and learned that the unusual spelling did appear in archival materials, potentially in error, and the traditional spelling is used in the English edition.

Some see more substantive issues with Tokarczuk’s portrayal of Jewish characters, situating her novel within a long history of Polish literature depicting the Jew as an exotic other. While Tokarczuk’s leftist bona fides are incontrovertible, some Jewish intellectuals see her approach to Judaism as representative of a broader issue with representations of Jewish culture on the Polish left.

“The book continues a lot of old Polish liberal tropes about how can Jew be a protagonist in the Polish novel,” said Kamil Kijek, a professor of Jewish studies at the University of Wroclaw and a member of Poland’s Jewish community. “The Jew becomes fascinating for the Polish intellectual when he or she tries to escape their Jewishness. And that is exactly what Jacob Frank did.”

Kijek said that, despite his criticisms, he admires the book and doesn’t believe Tokarczuk meant for “The Books of Jacob” to become emblematic of contemporary Polish Jewish literature. Rather, he said, the fact that relatively few Jews remain in Poland and the novel’s extraordinary success overseas put her in a strange position.

Tokarczuk, Kijek said, simply took certain characteristics of Jewish history and used them to create a novel that could speak to broader, universal concerns.

“She didn’t set out to a Polish novel or a Jewish novel, but a global novel, a human novel,” he says.

This story has been updated since publication with new information about the handling of the name “Shneydel” in the English translation of “The Books of Jacob.”