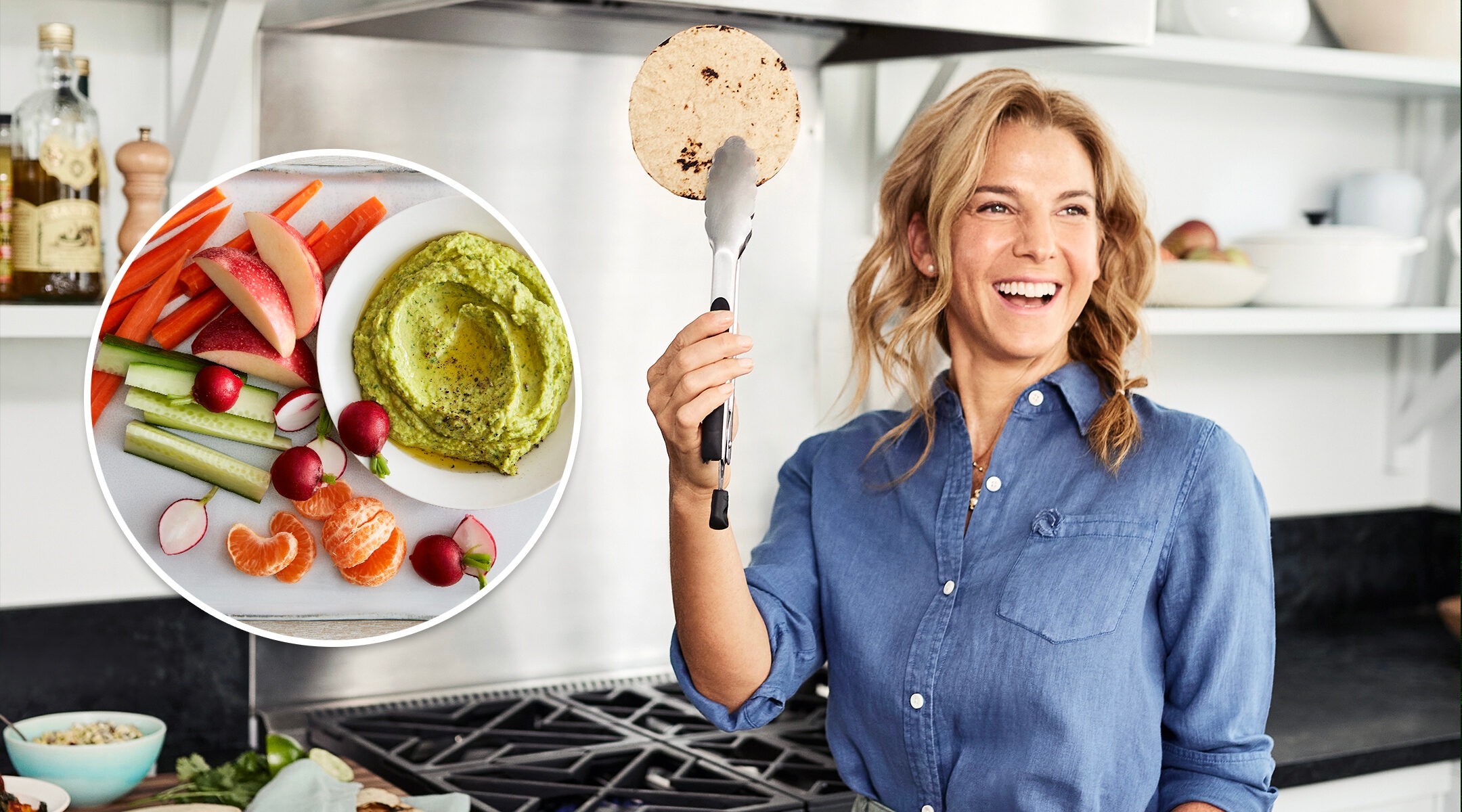 In her latest cookbook, "Vegan, at Times: 120+ Recipes for Every Day or Every So Often," Jessica Seinfeld shares meat-, egg- and dairy-free recipes she has developed for herself and her family, including Easy Green Hummus (inset). (Gallery Books)
Advertisement

(New York Jewish Week via JTA) — Jessica Seinfeld’s parents were true children of the ’60s. They did yoga before it was cool and served their three daughters brown rice, tofu and wholesome cereal purchased in their local food co-p in Burlington, Vermont.

The young Jessica, embarrassed by their focus on healthy eating, “always wanted regular cereal that you could buy on the shelves of typical supermarkets.” These days Seinfeld, 50 — the wife of comedian Jerry, of course, and a mother of three — is known for being a devotee of healthy food. Her first cookbook, 2007’s “Deceptively Delicious: Simple Secrets to Get Your Kids Eating Good Food,” which included strategies for sneaking pureed veggies into meals, was a bestseller.

Since then, Seinfeld has devoted much of her time to thinking about getting families to eat healthfully. In addition to running Good+Foundation, a NYC-based non-profit that aims to dismantle multi-generational poverty, she’s authored four additional cookbooks. Each one tackles a different food-related problem and provides solutions. With her latest, “Vegan, at Times: 120+ Recipes for Every Day or Every So Often,” she shares meat-, egg- and dairy-free recipes she has developed for herself and her family.

And yet, Seinfeld insists you don’t have to be vegan to enjoy her recipes. Eating vegan meals doesn’t mean you have to swear off a good steak or a piece of fish forever — Seinfeld herself certainly hasn’t.

“My entire life, I have been having bagels and lox every Sunday,” Seinfeld said. “When I married Jerry, we continued that tradition and my kids rely on it.”

In other words, being vegan “at times” means you don’t have to give anything up. As Seinfeld writes in the book’s introduction: “It’s time to eat, enjoy and live your life without fear of judgment.”

Veganism, and even “part-time” veganism, like Seinfeld’s, is on the rise. While 9.7 million Americans identified themselves as vegan in a 2019 survey by Ipsos Retail Performance — a number that held steady from 2012 — Gallup found in 2020 that nearly a quarter of Americans reported eating less meat that year than they had previously. (Just this past weekend the news broke that New York City Mayor Eric Adams — an avowed vegan who credits his plant-based diet with curing his diabetes — was spotted ordering fish at restaurants.) 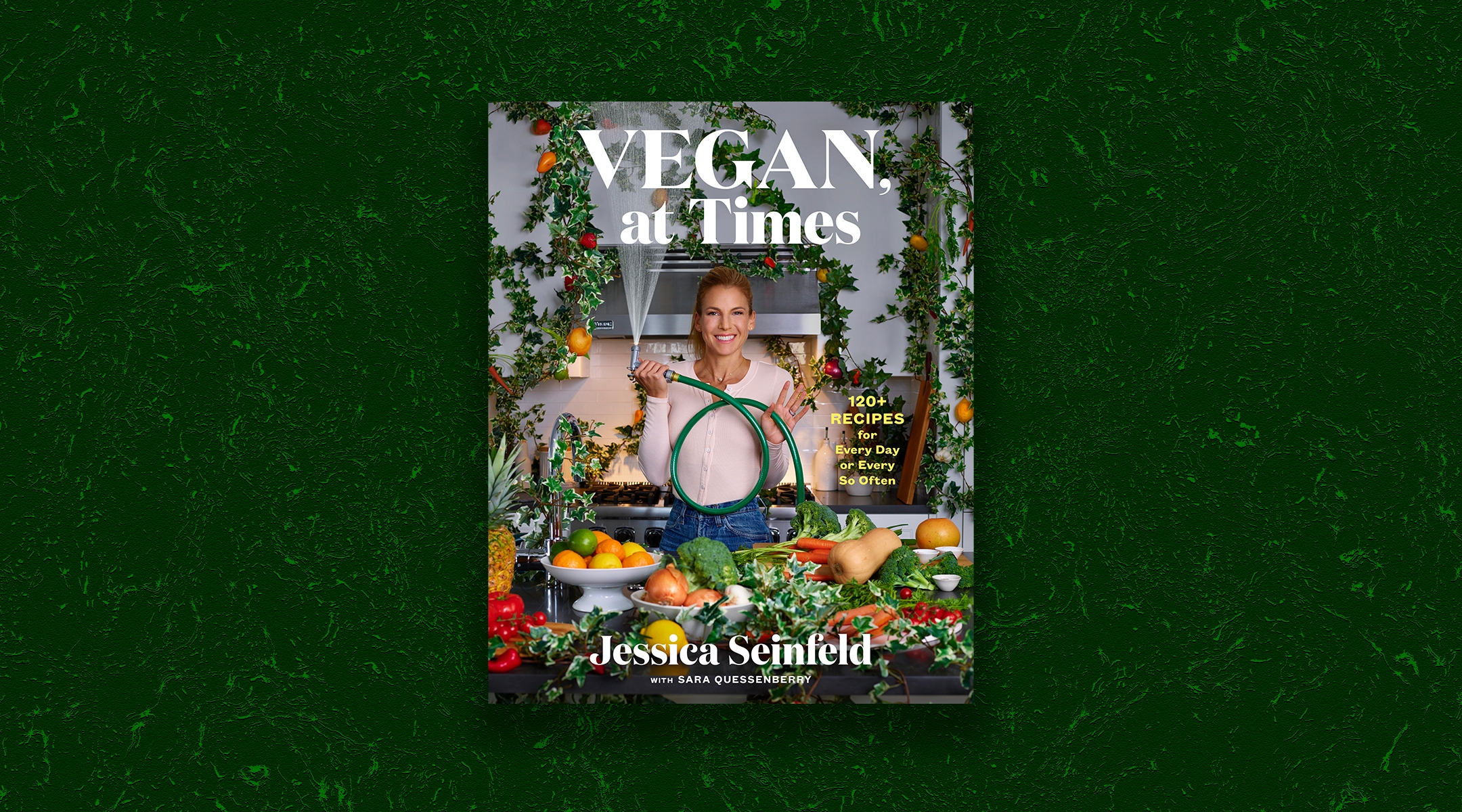 Like all of Seinfeld’s previous cookbooks, “Vegan, at Times,” which was published last November, is a New York Times bestseller. (Gallery Books)

According to a January, 2022 story from Insider, in 2020, the plant-based foods market was worth $29.4 billion and could grow to $162 billion in 2030. That’s not because more people are becoming vegans; instead, “non-vegans are helping fuel the plant-based boom by trying to cut down on their meat, fish, and dairy intake.”

Seinfeld serves traditional foods for Shabbat and Jewish holidays: brisket, kugel and homemade, braided challahs coated with an egg wash for a beautiful finish. “I am not willing to give up on that flavor or that color,” she said.

Aside from Sunday mornings and Jewish holidays, though, Seinfeld is mostly vegan. She writes that when she was in her 40s, she began to notice a connection between what she ate and how she felt. “I realized that what I ate could either drain me or invigorate me,” she writes.

Once she considered how veganism is good for the planet and good for animals, Seinfeld was all in — well, mostly in.

But Seinfeld didn’t immediately get on a soap box. Instead, she slowly experimented with recipes.The first vegan recipe that her family unanimously approved, which is in the new cookbook, was her egg- and butter-free banana bread. She baked it, left it on the countertop in the kitchen, and returned not long afterwards to find just a few remaining crumbs.The kids didn’t know that they had just devoured one of mom’s vegan creations.

“It’s through desserts that I got my children on board,” said Seinfeld, adding that they came to realize “vegan food does not have to taste like kale and spinach.”

Other desserts in the book include a chocolate sheet cake, made with ripe banana and olive oil and iced with a combination of coconut oil and cocoa powder. There’s also a carrot cake with unsweetened applesauce and sweetened coconut and frosted with a vegan cream cheese which she happily would make for her non-vegan friends.

The recipes are meant not only to be delicious, but easy-to-make (like her Easy Green Hummus) and affordable. “I keep perspective on how hard many people struggle in this country to afford – especially right now with inflation — groceries and dinner,” she said. “The ingredients are all accessible because we [Seingeld and her  co-author, Sara Quessenberry] shopped at typical grocery stores. We did not go to fancy gourmet shops.”

Seinfeld is a fan of the vegetable-forward cuisine coming out of Israel. “Tel Aviv is one of my favorite cities in the whole world,” she said. “I love Israeli food and I love that America is responding to it.” When at home on the Upper West Side in New York City — the family also has a home in the Hamptons — Seinfeld said they love to dine at Israeli chef Eyal Shani’s restaurants, Miznon and HaSalon.

Like all of Seinfeld’s previous cookbooks, “Vegan, at Times,” which was published last November, is a New York Times bestseller. And, Jerry’s response, according to Seinfeld, has been enthusiastic, too: He is “blown away by the book’s success and people’s response to it,” she said.

But let’s get to the opinions of the people who really matter. Just how exactly do those “‘60s cats” — how Seinfeld describes her parents — feel about their daughter’s latest food foray?

“My mom is obsessed with the book,” she said. “She sends me photos three or four times a week of dishes she is making. Her friends are cooking from the book, too.”