In this Turkish city, historic synagogues are seeing new life 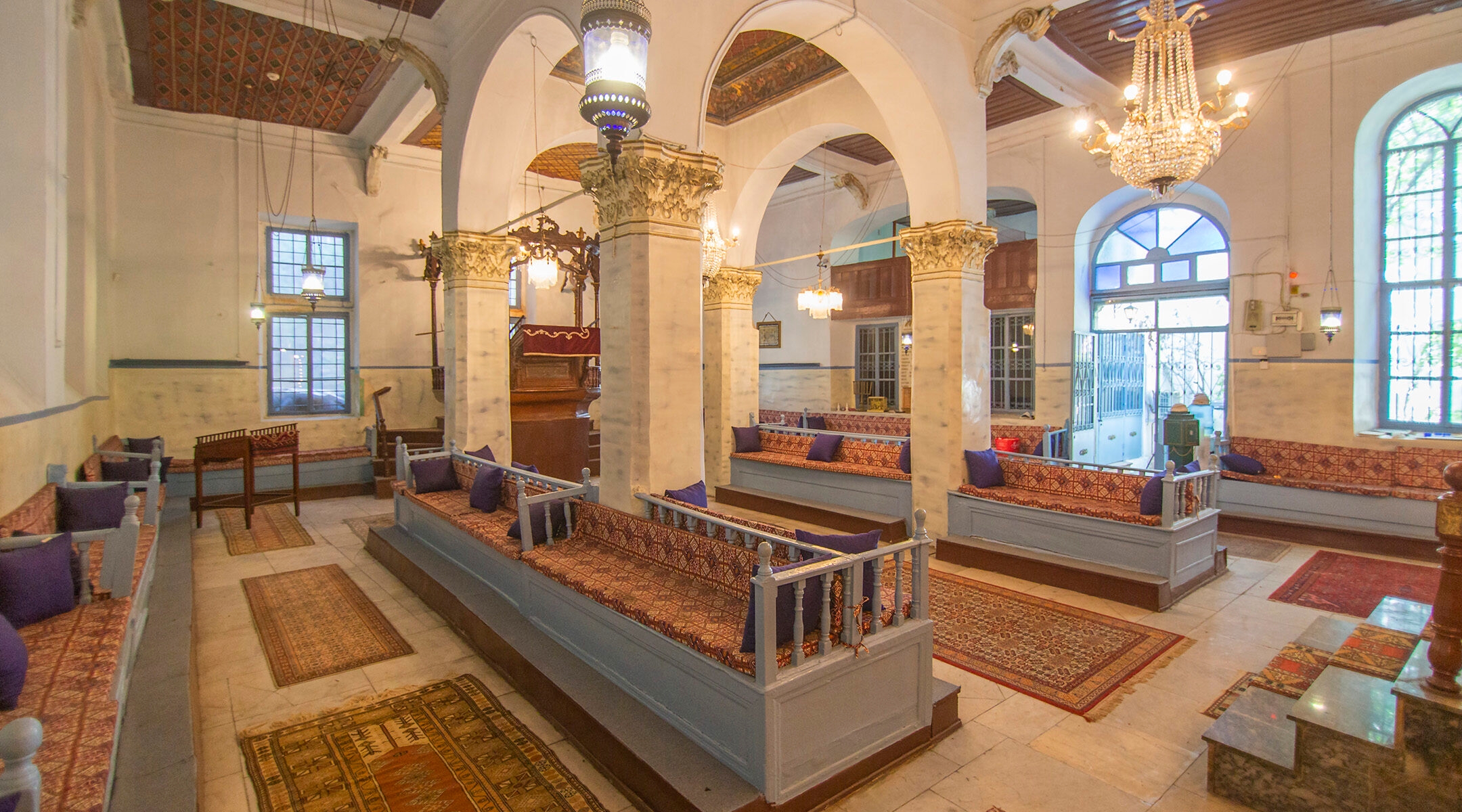 ISTANBUL (JTA) — Once a jewel of the Diaspora, 150 years ago the Jewish community of Izmir on Turkey’s Aegean coast numbered over 30,000. It was the hometown of notable figures, from the Ladino singer Dario Moreno to the renowned Rabbi Haim Pallachi to the infamous false messiah Shabbetai Tzvi.

Today, the city’s Jewish community has dwindled to barely 1,000 members. But Izmir’s residents and visitors will soon be able to get a taste of what the city was like when it was home to the third largest Jewish community in the Ottoman empire.

Thanks to the Izmir Jewish heritage project, nine historic synagogues in Izmir’s old town, known as Kemeralti, have been restored and will soon be open to the public as museums, starting in June.

The neighborhood, which sits not far from a promenade on the gulf of Izmir, is one of the largest open markets in the world, attracting tourists from all over Europe and beyond.

“You can find anything you want there, you can taste any food, smell any scent,” Nesim Bencoya, director of the heritage project, told the Jewish Telegraphic Agency.

Today, its skyline is dominated by the minarets of its many mosques and the spires of churches belonging to the Greek Orthodox community, whose members were once also a defining feature of Izmir’s diversity.

When the project opens, Bencoya hopes that the synagogues will join them as a major aspect of Kemeralti’s character.

“Even if there will not be one single Jew in Izmir, people will be able to say, look, there was a Jewish civilization here,” he said.

Six of the nine synagogues stand next to each other, practically wall to wall, surrounding a courtyard, while the other three are dispersed throughout the neighborhood. In addition to the synagogues, also undergoing restoration is the former office of the city’s chief rabbi. Just a few minutes walk away in the neighborhood is the childhood home of Shabbetai Tzvi and a building that once housed a kosher winery. 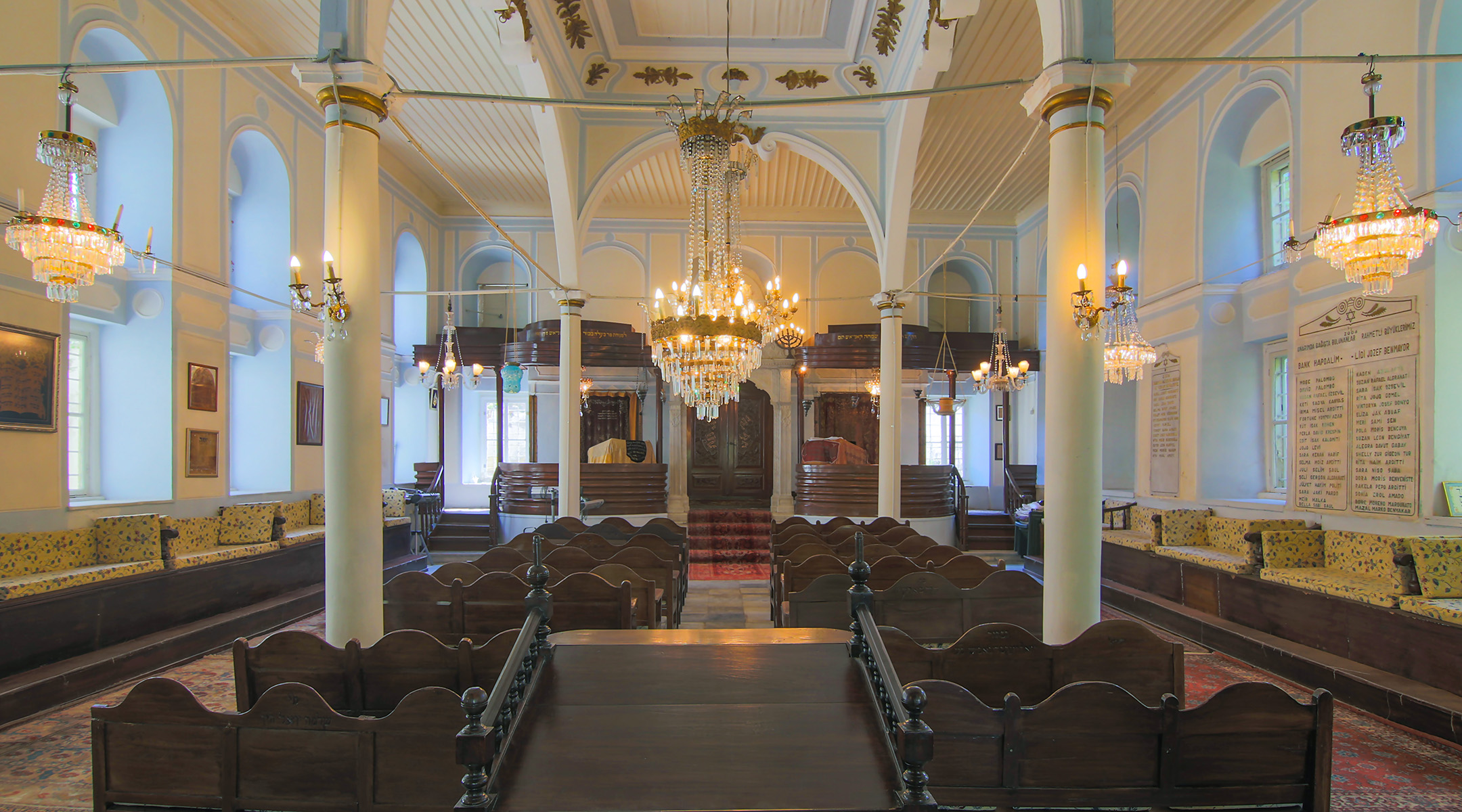 A photo of the interior of Sinyora synagogue in Izmir, Turkey. (Nesim Bencoya)

Once complete, the synagogues will serve as a living museum to to Izmir’s Jewish history, with exhibits on local customs as well as on the history of the individual synagogues and their congregants — such as the Algazi synagogue, which is named after the musical family of its rabbi, or the Portekiz synagogue, which was founded in the 16th century by North African Jews of Portuguese descent.

Izmir isn’t the only city in Turkey that is seeing its ancient synagogues restored. In recent years Edirne, a city by the border with Bulgaria, and Kilis, a city in eastern Turkey near Syria, have both had their long abandoned synagogues restored thanks to government funding.

No Jews live in either city today, and some skeptics have pointed to the campaigns as a way for President Recep Tayyip Erdoğan, a strongman with a history of controversial statements about Israel, to evade accusations of antisemitism. But others say it is stemming from a genuine appreciation for the country’s now dwindling Jewish community.

RELATED: Under Erdoğan, Turkish authorities are leading a revival of Jewish heritage

Bencoya said that his project, which is mostly funded by the European Union, was inspired by restoration of other historic Jewish neighborhoods, such as that done in Prague, whose Jewish quarter is now a major attraction for visitors to the central European city. Small towns in Spain are also looking to renovate (and in some cases unearth) ancient synagogues.

If successful, the project, he hopes, will help allay the expenses of the dwindling community so that they can afford to maintain their heritage.

“It will help the community, they will have income to take care of these places, and for whatever else they need,” Bencoya said. “Izmir tourism will profit from it too, the hotels, the restaurants, taxis, whatever cultural tourists can bring to the city.” Like Prague, there’s a lot to maintain as the community goes back a long way. 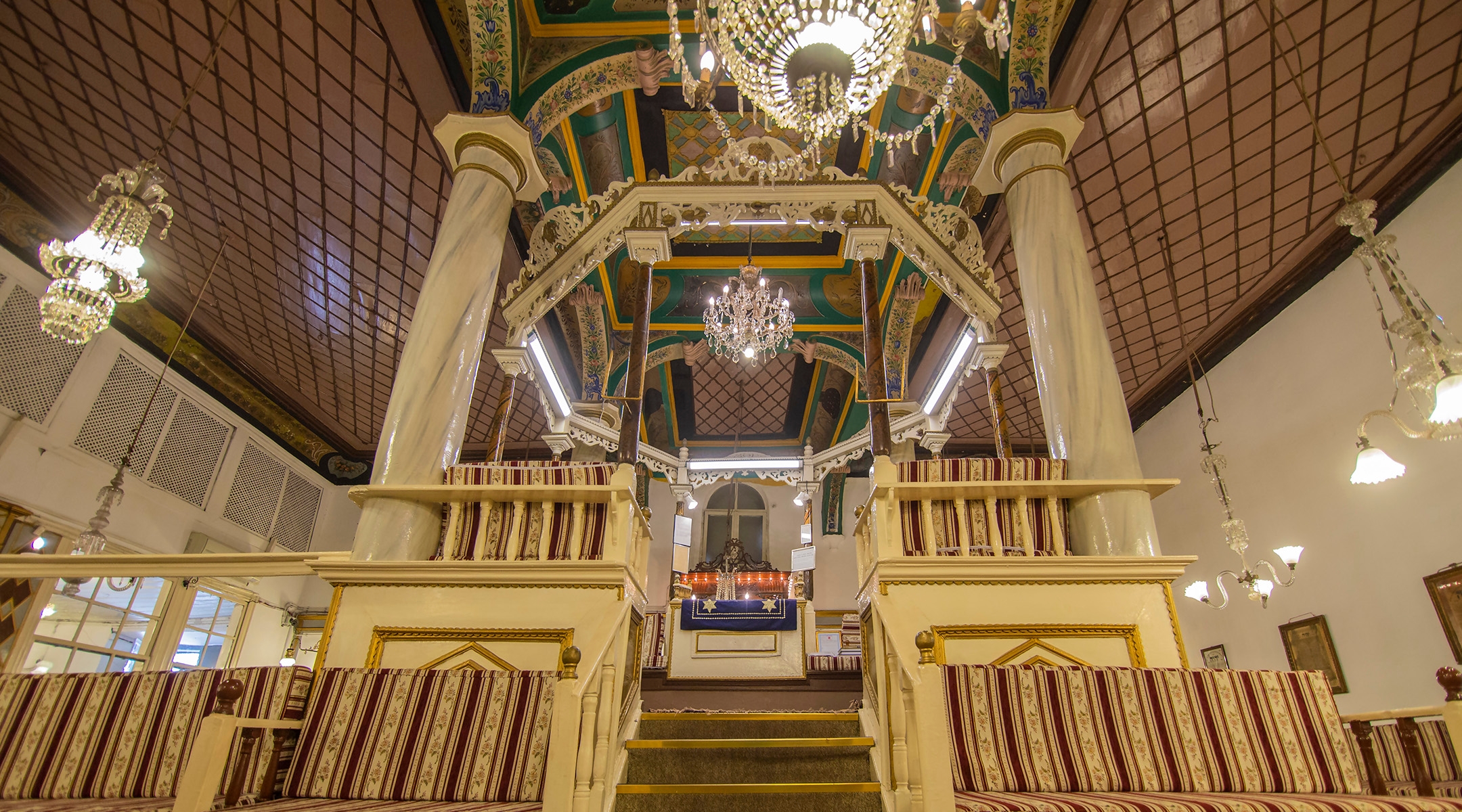 Jews have lived in Izmir, once known in Greek as Smyrna, since antiquity. Since the city was also a center of early Christianity, Jews are mentioned in church documents dating back to the second century AD.

The oldest of the restored synagogues, Etz Hayim, is attested to in records as far back as the 1600s, but local tradition holds that it has been around since the era of the Byzantine Empire.

Like elsewhere in Turkey, the city saw several waves of Jewish life, from the Greek speaking Romaniote Jews of the Byzantine era to the Sephardic community brought over by the Ottomans following their expulsion from Spain in 1492. 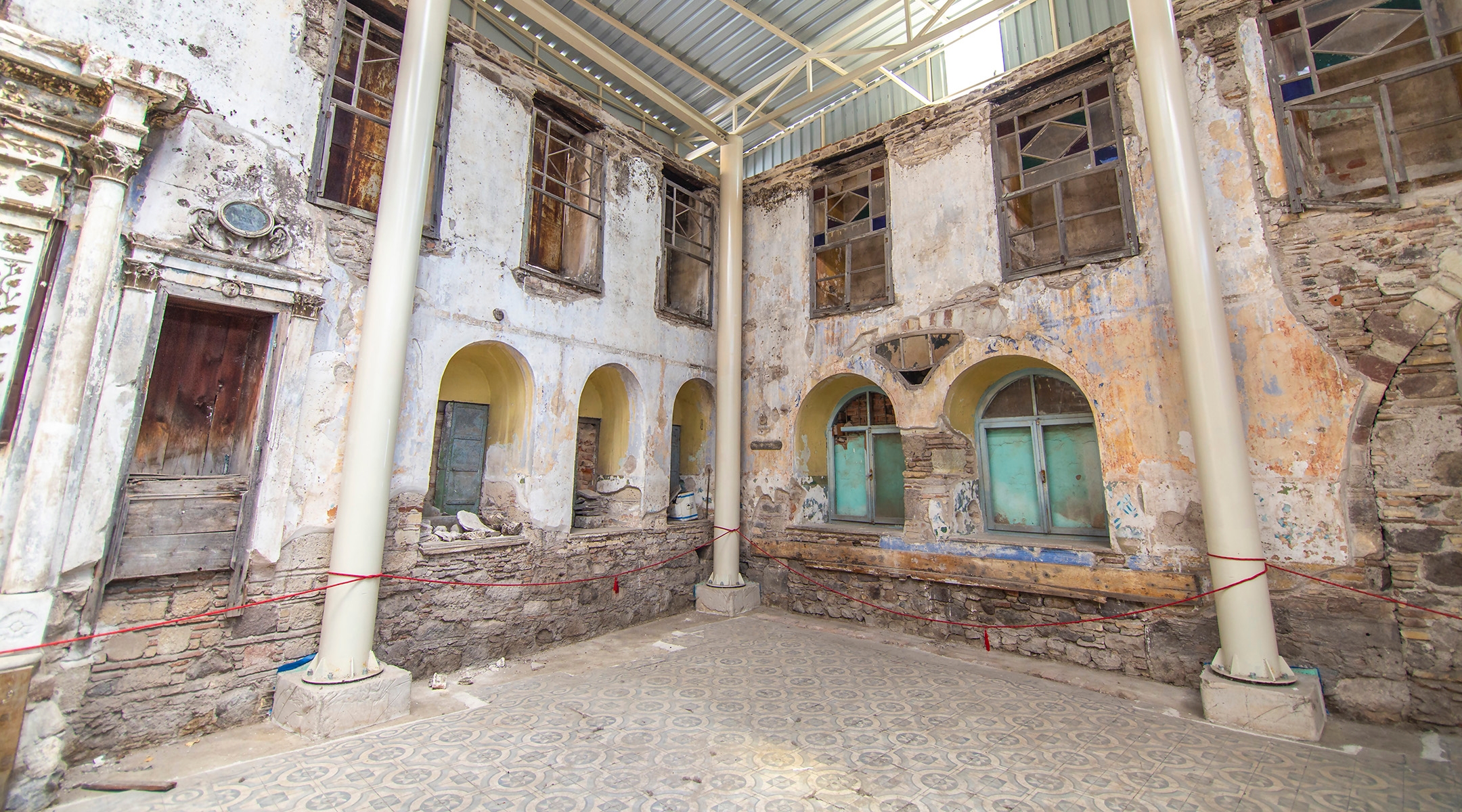 Restoration of the Talmud Tora synagogue is underway. (Nesim Bencoya)

The relative tolerance afforded by the Ottoman empire allowed the community to flourish, and by the turn of the 20th century, Ladino-speaking Jews made up 10% of the city, the second largest non-Turkish group after Greeks, who made up about half the city.

“We’re not newcomers here, we are very old citizens of this land,” Bencoya stressed.

Bencoya, who is 66, was born and raised in Izmir. Like many other Turkish Jews over the past century, at age 19 he emigrated to Israel, expecting to leave behind Turkey for good.

He lived in Israel for 39 years, before returning to the city of his youth in 2010.

“You know, when you start getting to 40 or 45 years old, you start thinking about your origins,” he said.

In Israel, he had been director of the Haifa cinematheque. After hearing from other Izmir Jews that the community was interested in conserving the city’s Jewish sites, he was tapped to lead the project. 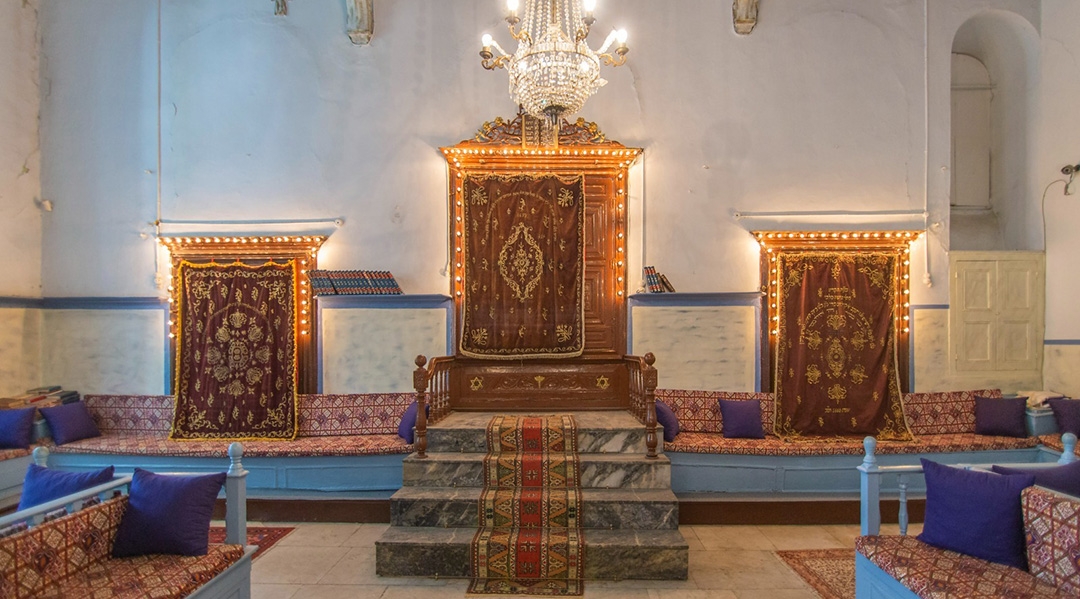 The interior of a synagogue in Izmir, Turkey. (Nesim Bencoya)

Bencoya has his own intentions of fighting antisemitism, through the act of boldly displaying the religious and secular aspects of his culture. He and everyone else involved in the project expect it to attract far more non-Jewish than Jewish visitors, and to provide a space for cultural dialogue between Jews and non-Jews in a country where antisemitic rhetoric is often normalized.

“How will I fight anti-semitism — not with arms of course, but by showing myself with pride,” said Bencoya. “Jews here have tended to hide themselves and we have proverbs that say, ‘don’t get involved in politics,’ ‘it is better if people don’t notice us.’ – I want people to notice us. I want to be taken into account, I want to participate in the decision making process. That’s what this project is about.”

“People come and see, and it will bring into the city money, all of Izmir will profit, Jews and non-Jews,” He added.

He hopes it will help shore up the pride of the Jewish community as well.

“The more successful it is, the stronger it will make our community. And maybe people won’t just leave and go to Israel, but that we’ll be here for another 100 years, at least another 100 years!”