Only 30, Charlotte Nichols could soon be the UK Labour Party’s only Jewish woman in parliament 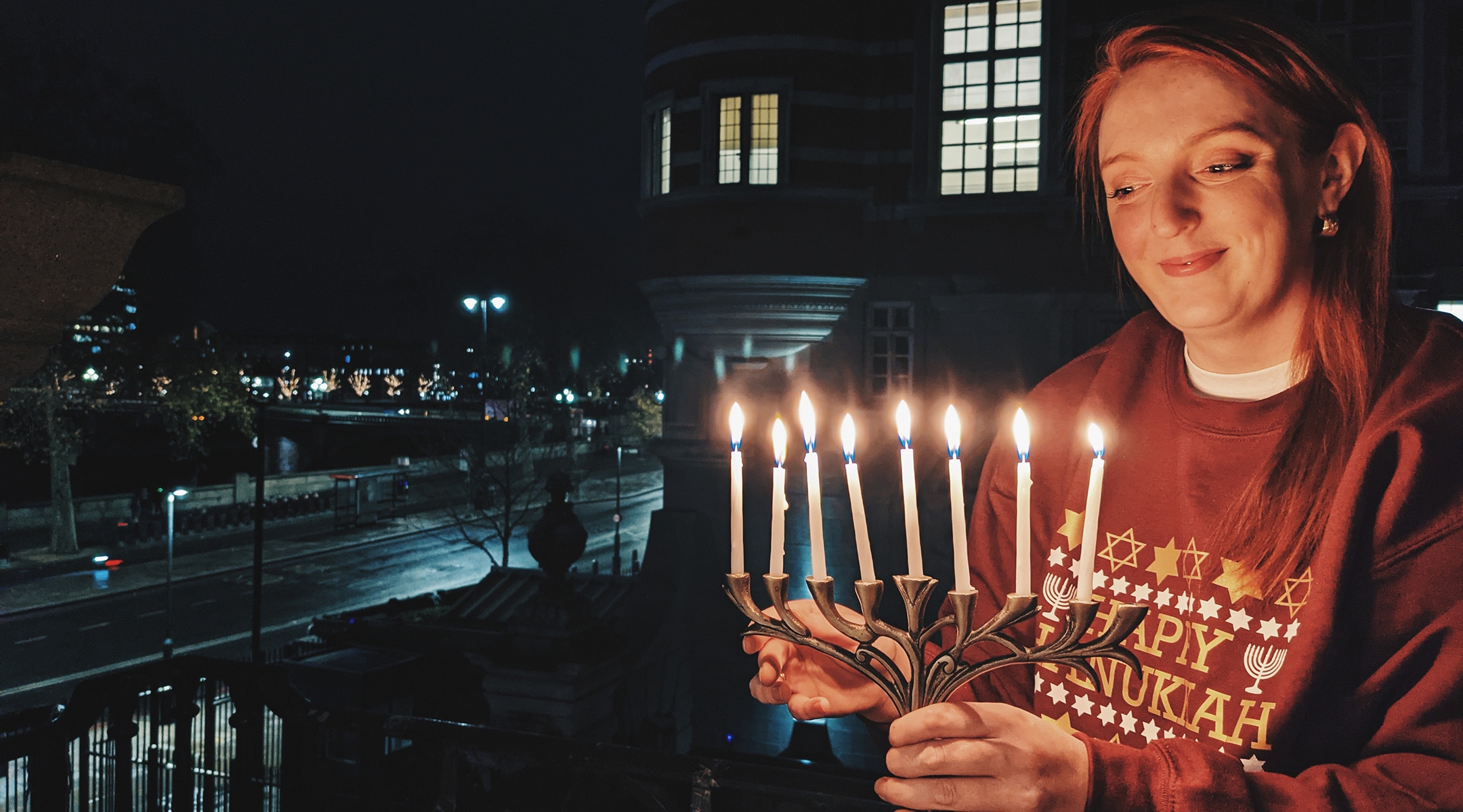 (JTA) — Labour lawmaker Charlotte Nichols delighted British Jews when she became perhaps the first person to reference Jewish terms like “mitzvot” and the Passover Haggadah in the United Kingdom’s centuries-old House of Commons.

Nichols, who delivered the milestone moment in a speech on International Holocaust Remembrance Day in January 2020, is a rising star in the Labour Party best known for speaking her mind on a range of topics — from social justice to women’s issues to whether it’s ok to beat up Nazis.

But if her Jewish identity is often overlooked, it is not because she isn’t a proud and leading Jewish voice in a party still reckoning with years of antisemitism accusations during the tenure of its previous leader, Jeremy Corbyn.

Nichols’ rabbi, for one, who found the speech empowering, wasn’t surprised that she made some history.

“We’ve [now] seen our text and stories used in that space, and that’s just so beautiful,” said Rabbi Robyn Ashworth-Steen of the Manchester Reform Synagogue, who added that Nichols is a very active member of the congregation.

If some forget she is Jewish, rivals and antisemites do not. It’s still “one of the first things people will go for” when trying to hurt her, she told the Jewish Telegraphic Agency.

Last February, a Conservative Party candidate for a local government councillor position in Warrington North was removed from the race after tweeting “Keep the Aryan race going” at Nichols. The same person was investigated by the Conservative Party for accusing Nichols in a private messenger group of using her bisexuality and Jewishness to win votes.

“I also get some stuff sometimes from the right of the Jewish community, who will send me stuff about being a Kapo or not really being Jewish,” she said.

“I even got some really horrible stuff a while ago about, because I converted to Judaism, I’m the Rachel Dolezal of the Jewish community,” she added, referring to the white American activist who infamously presented herself as Black.

Nichols entered parliament at the tail end of the Corbyn era and has a slightly complex relationship to Labour, because of her progressive trade union background. Though she never outrightly condemned Corbyn’s leadership, she has been firm in saying that the party did have an antisemitism problem.

“I’ve never tried to claim that there isn’t antisemitism in the Labour Party,” Nichols said. “I’ve certainly tried to say it’s a more complex issue than it’s often been painted as, but I’ve never denied that it is an issue.”

Nichols was born into a Catholic family in Romford, a Jewish area of east London, and grew up in Reading, a town just outside the capital. Her mom ate “so many bagels” when she was pregnant with Nichol’s that the family is convinced her conversion to Judaism, which Nichols completed in 2014, was predestined.

“My nan [grandmother] had always been interested in that maybe somewhere back in the family tree there might have been some Jewish in there, because that’s something that apparently used to be a topic of discussion with our Jewish friends,” Nichols said.

“Most of the time, conversion narratives are either rooted in — for any faith, not just Judaism — that you have met a partner [and] that is something that’s very important to them, so you’ve just kind of gone along with it… or it’s rooted in like, ‘Oh, I was at such a low point in my life… and then I had some sort of epiphany,’” she added.

But Charlotte’s story didn’t fit either of those narratives. She began reading up on Judaism after hearing an obscure Jewish joke on TV (she can’t remember it) at age 22. Soon after, she started going to weekly services at the Manchester Reform synagogue, where she felt more peace than she ever had growing up as a mostly secular Catholic with some Irish heritage. 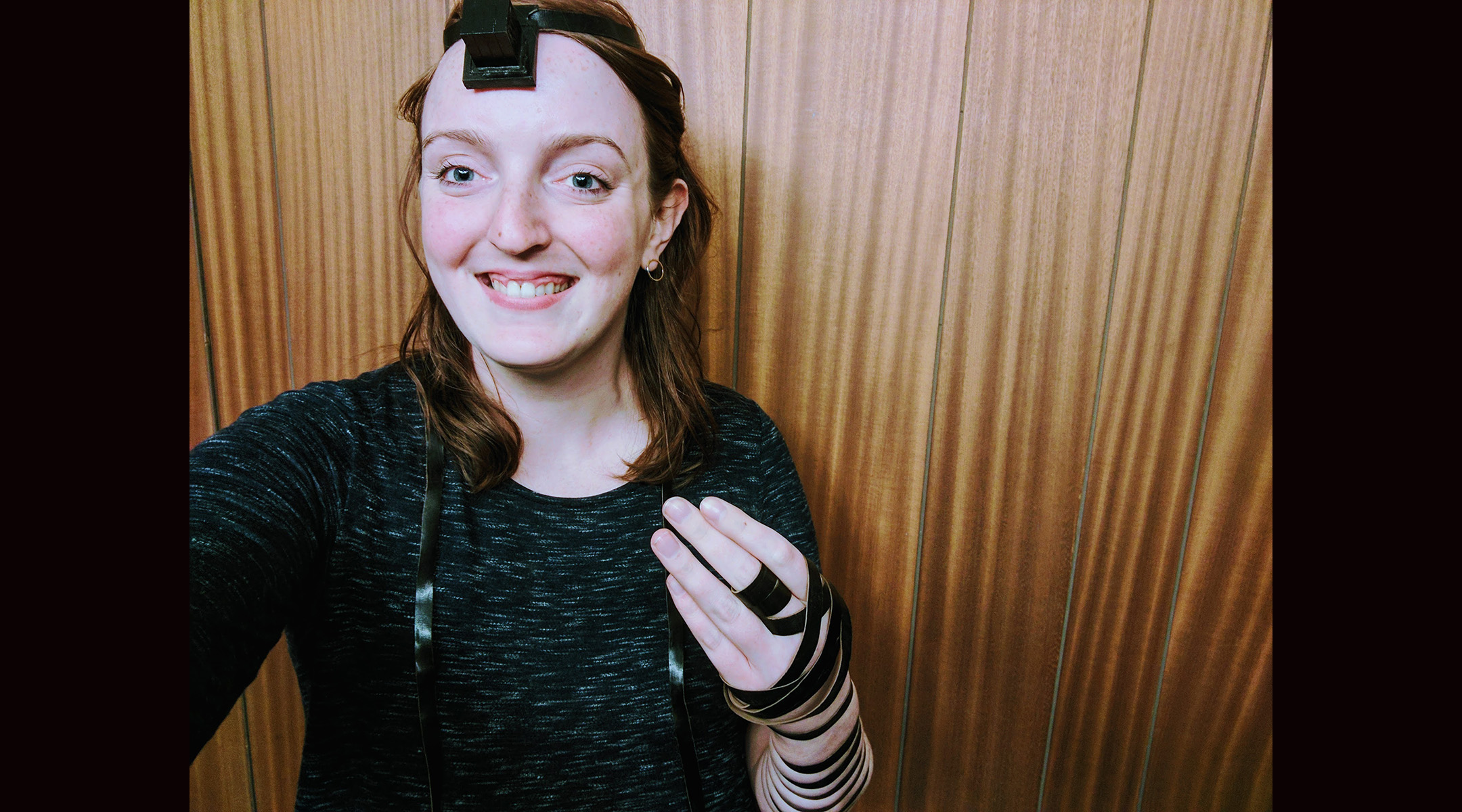 Nichols, shown wearing tefillin, is a member of the Manchester Reform Synagogue. (Courtesy of Nichols)

“I wasn’t brought up a practicing Catholic. Catholicism and the Irish thing is like, in the same way a lot of secular Jews understand their Jewish identity as ‘it’s not about what you think or how you practice or what you believe.’ It’s about what you are,” she said.

Nichols’ father, originally from Liverpool, is a longtime trade union leader, and was recently president of the Trade Union Congress for England and Wales in 2019-2020. Nichols followed in his footsteps, becoming a researcher at the USDAW (Union of Shop, Distributive and Allied Workers) in Manchester.

When the incumbent Labour MP for Warrington North stepped down just six weeks before the 2019 elections, friends and colleagues in the trade union movement persuaded Nichols to become a candidate.

“I’d always been surrounded growing up by a lot of very fierce strong trade union women. And so that was the career path that I wanted to go down. I wanted to be a trade union officer. The actual becoming an MP thing came about pretty much randomly,” she said.

Her path wasn’t entirely unpredictable though, said David Kogan, author of “Protest and Power: The Battle for the Labour Party,” a book that examines how the party ended up with Jeremy Corbyn as leader.

“She wasn’t coming cold into Labour politics,” he said. Instead, she was “very well-connected” in the left wing of the Labour Party movement.

Like a good millennial, Nichols was in a pub when she found out the party had chosen her as a candidate. Four weeks later, on a December morning at 5 a.m., she was declared the seat’s winner.

Not long after, she burst into headlines by saying that a group of soccer fans who made Nazi salutes should “get their heads kicked in.”

“Not only do I not believe in freedom of speech for Nazis, but I think it’s perfectly appropriate, that, depending on the context, that they might have to be met with physical resistance,” she told JTA, adding that her grandfather, who fought in World War II, “didn’t go to defeat Hitler in the marketplace of ideas.”

So far, Nichols has claimed victory in reforming the U.K.’s domestic abuse bill and reducing the cost of emergency contraception. She pushed parliament to work on improving accessibility to public transportation for people with disabilities.

Jews have historically been an indispensable part of the British Labour movement, which grew out of socialist parties in the 19th century. In Labour’s 1945 post-war election win, 28 of the party’s MPs were Jewish. But that Jewish representation, dwindling even before the Corbyn controversy, has dropped precipitously in recent years. 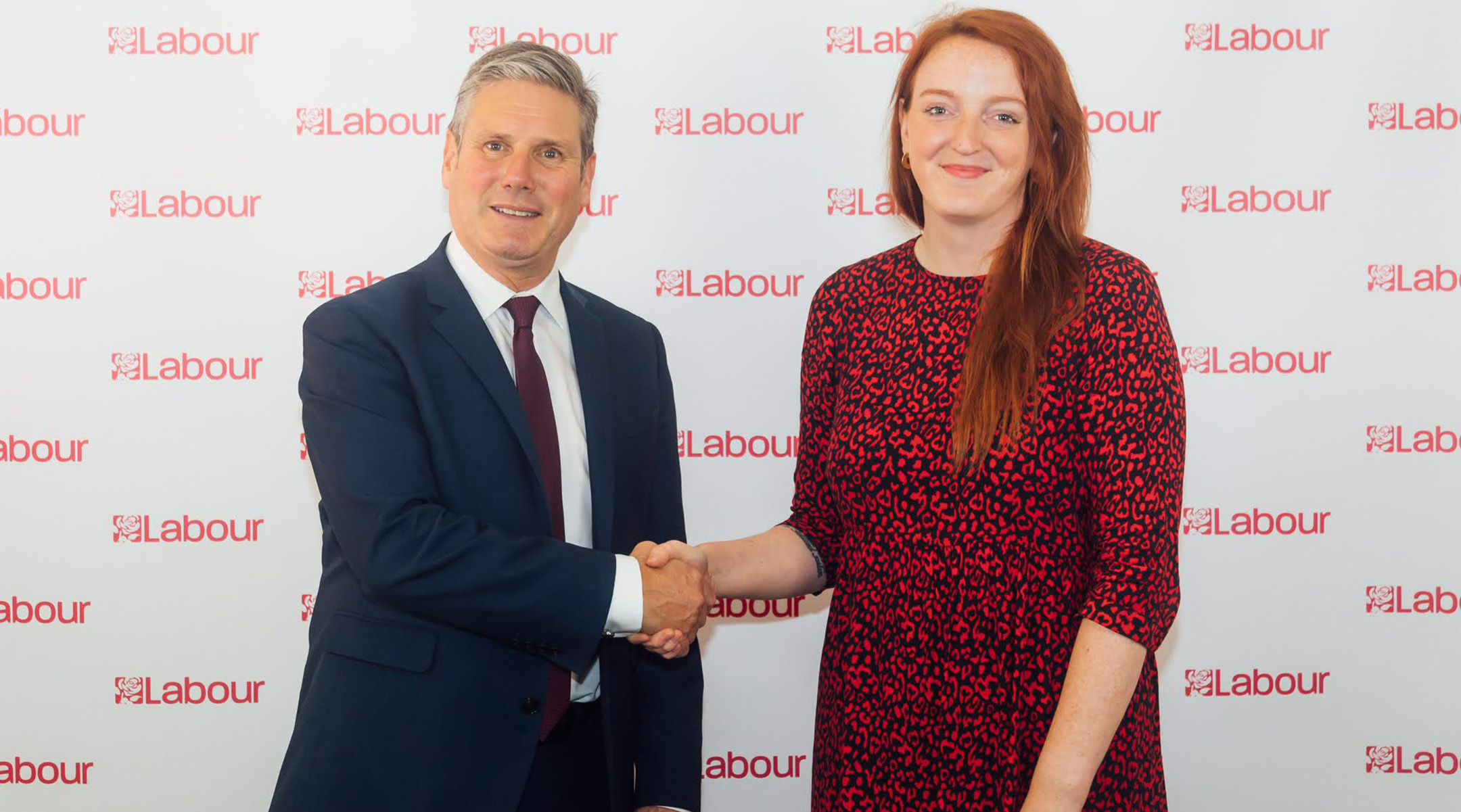 Jews in Labour and beyond were concerned by, among other things, Corbyn’s questionable associations with the terrorist groups Hezbollah and Hamas, and after he shared a picture of an antisemitic mural on social media. Some Jewish Labour members also felt that their complaints about antisemitic abuse online weren’t being taken seriously enough.

In 2019, Luciana Berger and Dame Louise Ellman, both Jewish Labour MPs, resigned from the party over the scandal. Dame Margaret Hodge, 77, another Jewish MP who has served since 1994, will not run in Britain’s next elections, which could come before 2024. Nichols could soon be the last Jewish woman left in Labour’s parliamentary ranks.

Kogan said that although Nichols at one time backed Corbyn — trade unions were a core part of his constituency — it was telling that she didn’t join in with the “old guard” of Corbyn supporters to defend him when he was suspended from the party in October 2020, after saying Labour’s antisemitism problem had been overstated. She also did not join the chorus of supporters who called for Corbyn to be reinstated into the party and allowed to run as an MP.

Out of the 2019 group of new Labour entrants, Nichols has “probably had the fastest rise of any” of them, Kogan said, noting that she will be a strong contender for other big ministerial roles in future. 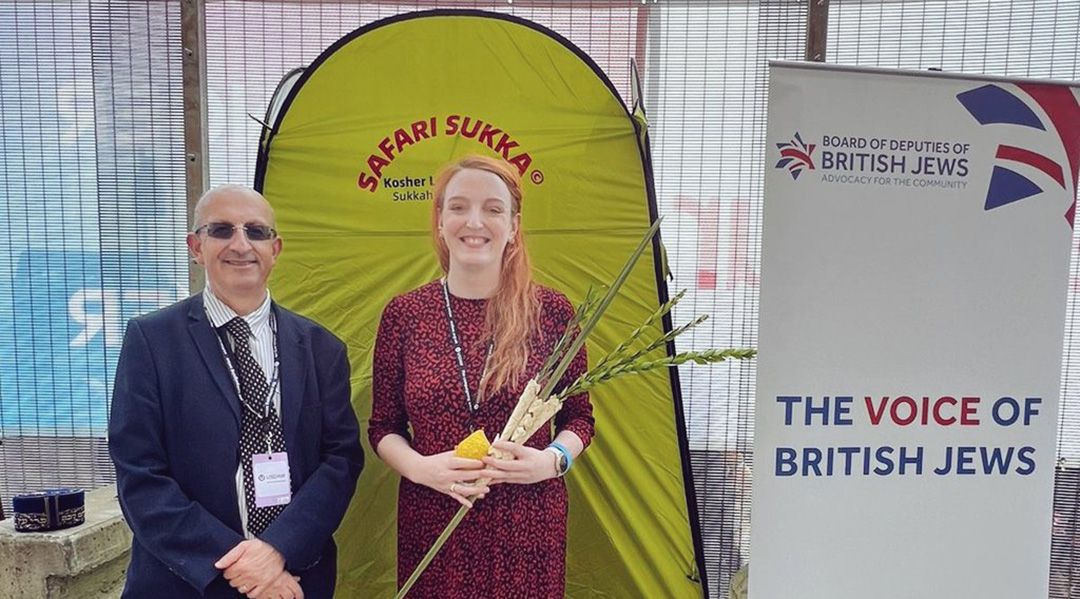 She has also become a rising star at her synagogue, which meets in a 166-year-old building in Manchester — the closest synagogue to Warrington, about a 30-minute drive away. The congregation has a rich tradition of politician members, and the building was used as a set in the 2021 BBC series”Ridley Road,” about British Jewish anti-fascists in the 1960s.

Rabbi Ashworth-Steen said that at their pre-pandemic Torah on Tap events — where members would gather to discuss Judaism in a local pub — Charlotte would always convey “to other people that it’s OK to talk about what you think.”

“She always has really interesting ways of talking about Judaism,” Ashworth-Steen said.

Nichols lived in the United States for a few years, working for Hillary Clinton’s 2016 presidential campaign, and she recalled how much easier being Jewish seemed there than it did in the U.K.

“There’s a feeling of comfort and security in being Jewish and being able to express dissenting opinions, and what have you, there [in the United States] than there is here, where maybe people [in the Jewish community] feel more like we all have to speak with one voice,” she said.

Having experienced Brexit in the same year that Clinton lost to Donald Trump, she said that both the Hilary and Remain campaigns suffered from a “bubble of denial”: Both campaigns had failed to understand the needs of those living on the Rust Belt and, in England, the Red Wall — traditionally Labour areas in the north of the country that voted overwhelmingly to leave the European Union, she said.

But Nichols said she has ideas up her sleeve to win back Red Wall voters (with or without help from the Partygate scandal currently threatening Prime Minister Boris Johnson’s government). Along the way, she hopes to “add texture to people’s understanding of the Jewish community” so that “they understand that it’s more than antisemitism and the Middle East.”

“I see my politics as a bit of a triangle with feminism, socialism and trade unionism. And I feel like my Jewishness and Judaism reinforces all of the sides of that triangle,” she said. “They’re all… indivisible from each other.”