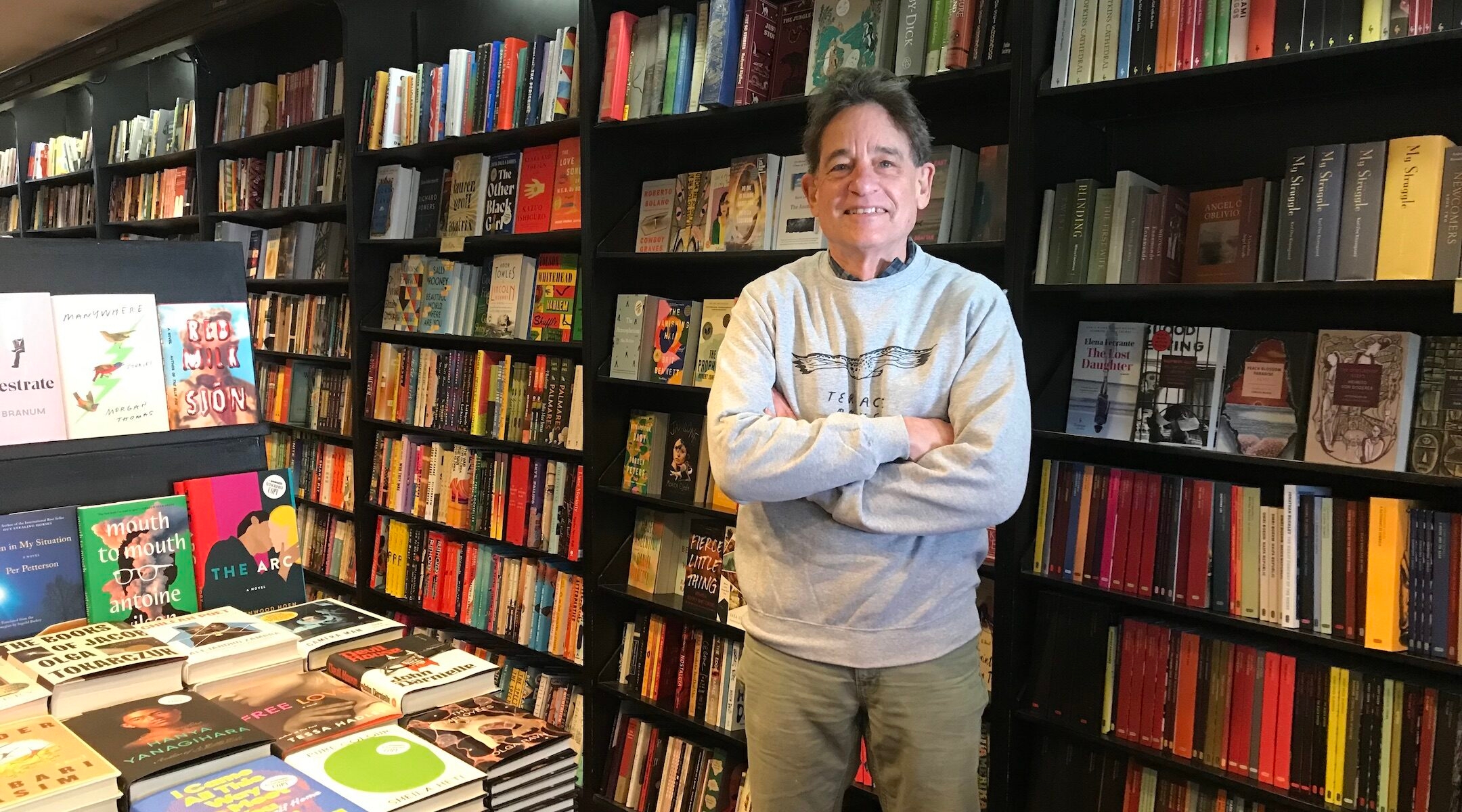 Ezra Goldstein has been carefully selecting and stocking books at Community Bookstore since he took over the shop in Brooklyn's Park Slope neighborhood in 2009. (Julia Gergely)
Advertisement

(New York Jewish Week via JTA) – When he was 60 years old, Ezra Goldstein never expected to start a new career running a bookstore.

But that’s exactly what happened when he took over Park Slope’s Community Bookstore, the oldest independent bookstore in Brooklyn, in 2009. The unexpected turn of events turned out to be a surprisingly rewarding path: He brought the bookstore out of debt, became a fixture of Park Slope and has been called the “oracle” of Brooklyn’s literary community.

Now, at 73, Goldstein is ready to shelve his last book. On Friday, Goldstein will retire, leaving the reins in the hands of the Community Bookstore’s co-owner, Stephanie Valdez, who is 35 years his junior.

“I am retiring because I’m old enough to do so, wise enough to get out while I have my wits about me, still fit enough to keep up with my hyper-active, outdoorsy wife and offspring,” he wrote in a letter that was posted on the store’s social media pages and on Park Slope community forums, as well as sent in an email to customers.

Prior to running the store, Goldstein had spent the previous 40 years of his career as a writer for local newspapers, including the Long Island Jewish World. In the 2000s, he was a freelance editor and writer, and helped ghostwrite memoirs for some local Holocaust survivors.

It was working on a story in 2009 for the Park Slope Civic Council’s newsletter that changed the course of his life. He was interviewing his friend, Catherine Bohne, who had owned Community Bookstore since 2001. By the end of the third bottle of wine, Bohne confessed that she was ready to abandon the bookstore and move to Albania, a lifelong dream of hers.

If only she could find someone to take it off her hands, she joked. She had felt extreme pressure from Amazon as well as Barnes & Noble, which had arrived in 1997 and was only six blocks away. Bohne was eager to get out from underneath the stress.

Goldstein went home to tell his wife, Annette, whom he met while volunteering with the progressive group New Jewish Agenda. But instead of the laugh he expected, she took Bohne’s threat seriously. “She said, ‘Well, why don’t you do it? It’ll get you out of the house,’” Goldstein recalled.

Soon enough, Bohne had booked a flight across the Atlantic and was handing Goldstein the keys for a trial run. “If you like it, we can work something out,” she said.

Twelve years later, it’s clear that the friends’ gamble paid off. Goldstein transformed the struggling store into a thriving community hub, even acquiring a second bookstore, Terrace Books in neighboring Windsor Terrace, in 2013.

Still, the first few months weren’t easy. He turned to Valdez, an especially competent and passionate member of the team. Goldstein may have made a late-life change in his career but, at 25, Valdez was just beginning hers. It was a perfect match.

“Within a fairly short time, it was thriving,” Goldstein told The New York Jewish Week. “Once we got books back on the shelves and showed the neighborhood that we were serious about this, everyone got behind us and we just kept going from there.”

“Ezra really turned things around by through a combination of discipline, care and diligence,” Valdez said.

“When Ezra and Stephanie took over the store, they were simultaneously able to nurture the cozy, personal, neighborhood feel of the place and transform Community into one of the country’s leading independent bookshops,” said Tim Mohr, a literary translator and the author of “Burning Down the Haus,” a history of German punk rock, who lived nearby for 15 years. “Thanks to Ezra and Stephanie’s leadership, it became not only a beacon for the Brooklyn literary scene, but a national tastemaker.” 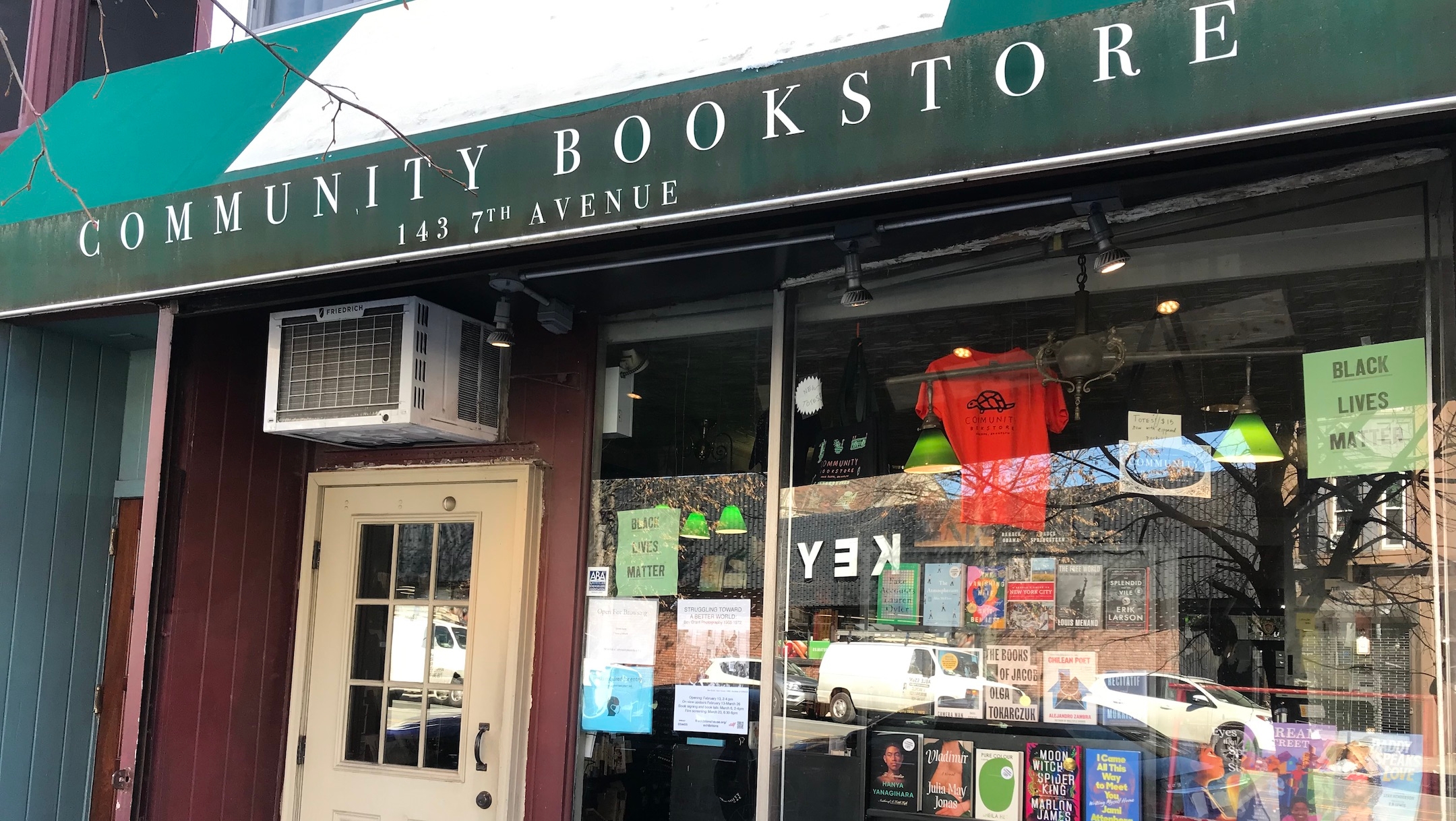 The display at Community Bookstore in Brooklyn window “offers a gauge of how the neighborhood is thinking and feeling at any given moment,” said writer and patron Tim Mohr. (Julia Gergely)

The day-to-day running of the bookstore mostly includes ordering and stocking all the books that Park Slopers could ever want — bestsellers, books from local authors, cookbooks, coffee table books and more. “A lot of what we do is shaped by the neighborhood we are in,” he said. “It’s a very intelligent readership and a very sophisticated audience. So we were very lucky because we never had to stock a lot of schlock. We could always have good books.”

“More so than any other local business, checking out the display window at Community offers a gauge of how the neighborhood is thinking and feeling at any given moment,” said Mohr, who would often start his days drinking coffee and chatting with Ezra as he opened the store. (Items in the display window are also available to view on the bookstore’s website, for those who have moved out of the neighborhood.)

Originally from Zainesville, Ohio, Goldstein moved to Park Slope in 1986, when the neighborhood looked and felt very different. “There were drug deals going down two blocks down the street in a bodega, you know, openly in the daylight,” he said in a 2015 interview for the Urban Memory Project. “You know, for an Ohio kid who didn’t know what was going on, it was very scary.”

Of course, these days, Park Slope is a destination neighborhood in uber-cool Brooklyn — and one of the most expensive neighborhoods in New York. Park Slope is probably best known for its quality public schools — and the young families that populate the neighborhood — as well as its cadre of A-list writers, including Paul Auster, Siri Hustvedt and Jonathan Safran Foer.

Supporting local authors, Goldstein said, is one of his favorite parts of the job. He has also gotten to know hundreds of customers who have come and gone over the last 12 years. “There’s great continuity in a small shop in a tight community,” he said. “I have watched children grow up.”

In turn, the loyalty of many Park Slopers was critical when the pandemic first hit and the shop — like nearly everything else in the city — was forced to close its doors. He was relieved and honored when floods of online orders started coming in, not just from Brooklyn but from all over the country.

These days the bookstore is still able to hold the community together through virtual events that bring together writers and readers from across the globe. For example, Gal Beckerman will present his newest book, “The Quiet Before,” a study of radical social movements, on Feb. 16, and Nobel Prize-winner Olga Tokarczuk will present her newly translated novel “The Books of Jacob” on Feb. 19.

“Community Bookstore is such a fixture in Park Slope, as much a community center as a place to buy books,” said Beckerman, who is senior editor for books at The Atlantic and a Park Sloper for nearly two decades. (Beckerman is also the spouse of Deborah Kolben, who is the chief content officer of The New York Jewish Week’s parent company, 70 Faces Media.) “And Ezra made that happen. He cares deeply about books and literary culture and it was always a pleasure to walk in there and chat about what he was reading.”

Goldstein’s love of books runs deep. He grew up in a household filled with books — something that he said helped shape his Jewish identity.

“You don’t have to be Jewish to be a successful bookstore owner,” Goldstein, who has served as vice president of the Park Slope Jewish Center. “But it is very fulfilling. I love reading, I’m passionate about books, and I’m sure that my Jewish roots have a great deal to do with that.”

In retirement, Goldstein plans to spend time with his new grandson and Tiny the Cat, the bookstore’s unofficial mascot, who was a kitten when Goldstein first took over the store.

He also plans to regularly visit the Community Bookstore, a place he said gave him back twice as much love as he put into it. “It was definitely random but it turned out to be bashert,” he said, using the Yiddish word for destiny. “It was something I think I was meant to do all along.”