One ‘crazy’ family: ‘Jackass: Forever’ star Rachel Wolfson on being the first Jew and woman on the stunt comedy team 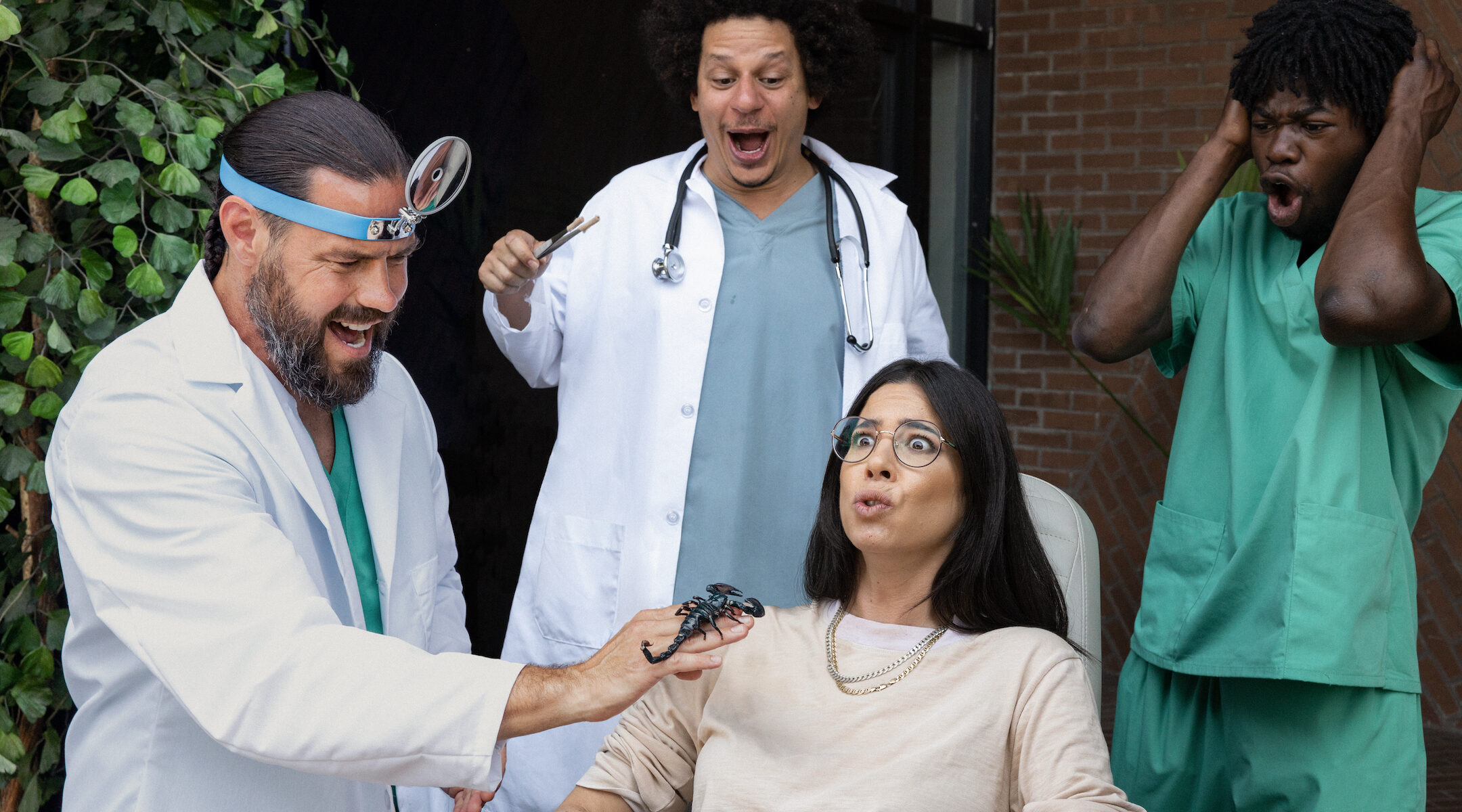 Rachel Wolfson in an uncomfortable scene with, from left, Chris Pontius, Eric Andre, and Eric Manaka — and a scorpion — in "Jackass: Forever." (Paramount Pictures)
Advertisement

(JTA) — Most film debuts don’t include licking a taser while dressed as a mime, or having a scorpion crawl on one’s face. But when it comes to the “Jackass” TV and movie franchise, that’s par for the course.

“When I first told them, they were like, have you told your therapist?” Wolfson told the Jewish Telegraphic Agency.

Through three seasons on MTV, three standard movies and various ancillary projects over more than 20 years, “Jackass” became a zeitgeist mainstay as its cast inflicted all sorts of R-rated bodily harm on themselves for laughs.

Until now, the group led by actor Johnny Knoxville has been entirely male, entirely gentile and almost entirely white. Wolfson, a 35-year-old standup comedian, joined the team as it added younger and more diverse members for “Jackass: Forever,” which debuted in theaters earlier this month.

She’s the first woman in the troupe — and the first Jewish member with prominent screen time in a “Jackass” movie. But she’s been prepared for what she describes as a dream job for years.

“I was a big MTV kid, I watched the show, I think it came out when I was 14 or 15 years old,” Wolfson said. “I did prank calls growing up with my friends, and my friends are skaters, and I grew up in Vegas — so that kind of culture is very much a part of my life. I got my first pair of Vans when I was in fifth grade. It was very much a part of my childhood. So when I got the call, I couldn’t believe it. And when I met them, it was like I’d known them my whole life.”

In addition to the “scorpion botox” and taser-licking stunts, Wolfson gets hit with a whole lot of glitter and paint in another scene.

She noted that despite its past and its grossout reputation, numerous other women are involved in the behind-the-scenes world of “Jackass.” They include executive producer Shanna Zablow Newton, costume designer Emily Ting and “Set Dresser Gang Boss” Trixie Gardner.

“A lot of people who are making the big decisions are women, which is very refreshing and really cool,” she said. “I felt the pressure not necessarily because of my gender, per se, but I definitely felt the pressure because I was new, and I wanted to prove myself, and maybe not necessarily let my gender hold me back from saying yes to anything or get away with anything.”

Knoxville found Wolfson through her standup comedy, which she says is influenced by her Jewishness.

“I think Jews and Jewish people, we use humor as a way to cope, because oftentimes that’s all we had, was that, and storytelling,” she said. “When I think of standup comedy I definitely think of the Jewish identity, and very much how the most successful comedians are Jewish, and there’s no coincidence to that. For me in particular, humor has always been a way that I have coped in life. And obviously as Jewish people, that’s something that has been a coping mechanism, for all of us.”

In her comedy, Wolfson often brings up being a rebel brought up by a strict family. She is the daughter of a couple of major legal figures in the Las Vegas area: Steven Wolfson, the current district attorney of Clark County, and Judge Jackie Glass, a now-retired jurist who in 2008 sentenced O.J. Simpson to prison following his conviction on several charges connected to his theft of sports memorabilia. Wolfson has joked that the same woman who used to send her to her room also sent O.J. to jail. 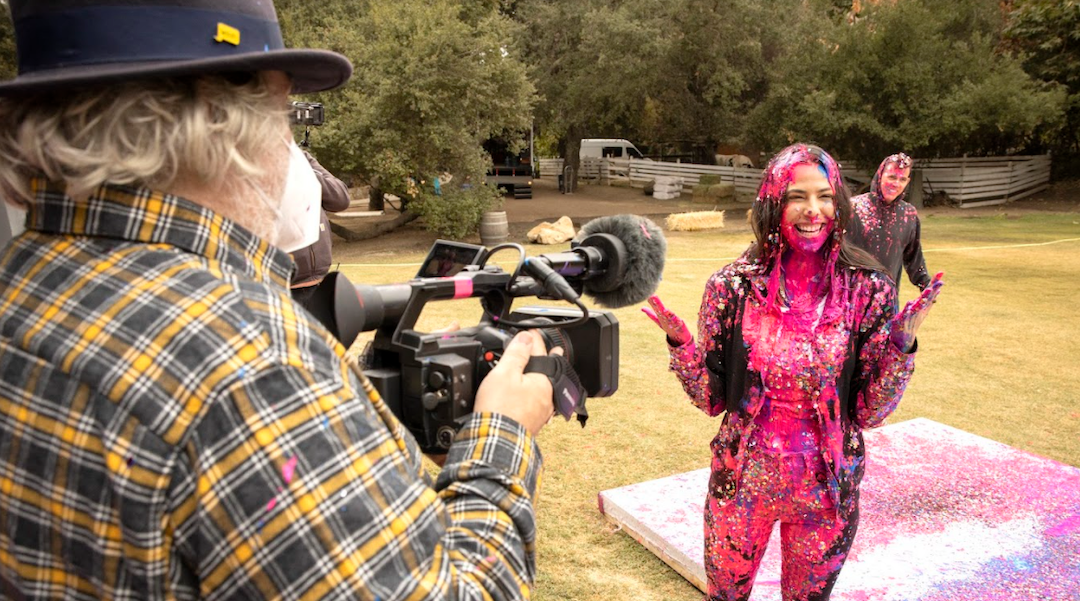 She grew up going to Jewish day school through 8th grade and said her childhood was strongly influenced by “the lens of Reform Jewish teaching.” But she considers herself less observant than previous generations of her family.

“My grandpa was Orthodox, so it’s like trickling down, becoming more diluted, at least by the time it got to me and my sister,” she said.

She added that her parents weren’t strict about sticking to religion — but they were in a cultural sense.

“I feel like Jewish parents sometimes don’t like seeing their kids get hurt, they don’t even like us playing football,” she said. “I think I also rebelled in a lot of ways, not against the religion but against the strictness.”

Naturally, those parents “had their concerns” about their daughter joining the “Jackass” team, but they got over them. Wolfson brought her parents to the film’s premiere and they loved it.

“My mom is now a ‘Jackass’ fan, and my dad said that it kept his attention the whole time,” she said.

Whether Wolfson is actually the first Jewish cast member on “Jackass” depends on how one defines “cast member.” The acclaimed Jewish filmmaker Spike Jonze — real name Adam Spiegel — has long been associated with “Jackass” as a co-creator, executive producer, and occasional on-screen performer, but he has never been part of the main cast.

The comedian Eric Andre, who often talks in his comedy of his “Blewish” identity — Black and Jewish — is in the new movie as well, but in more of a guest star role.

Then there’s the Irving Zisman grandfather character that Knoxville has portrayed in various “Jackass” projects, including the spinoff movie “Bad Grandpa.” He is likely meant to be seen as Jewish — one critic even described Zisman as “bad for the Jews.”

The show has some clear Jewish inspirations, too: the hidden-camera bits in “Jackass” owe a debt to “Candid Camera,” which was created and hosted by the Jewish producer Allen Funt. The crew’s slapstick comedy also recalls that of The Three Stooges — Knoxville and cast members Bam Margera and Steve-O even dressed as that Jewish comedy team for a photo shoot in 2010.

“Jackass 4.5,” an extended edition of “Jackass Forever,” is on deck. What’s next for the franchise beyond that is unclear, but Wolfson said she would “would definitely say yes” if asked to be part of further “Jackass” projects.

“I got inducted into this crazy, cool family. I would love to continue working with them, it’s such a cool opportunity, and I’m forever grateful,” she said.

And while she won’t say which previously unseen stunts of hers will be featured in “Jackass 4.5,” Wolfson is looking ahead — to more standup comedy.

“Standup is always going to be a part of my life,” she said. “When I got into stand-up that was my expectation, was to really hone in my craft, and immerse myself. So standup will never go away, but I’m open, if more movies and TV shows come of this, mazel tov. What got me here was just being open and seeing what the universe had to stock for me.”