Israel Studies at U of Washington will remain despite return of $5 million gift, school says 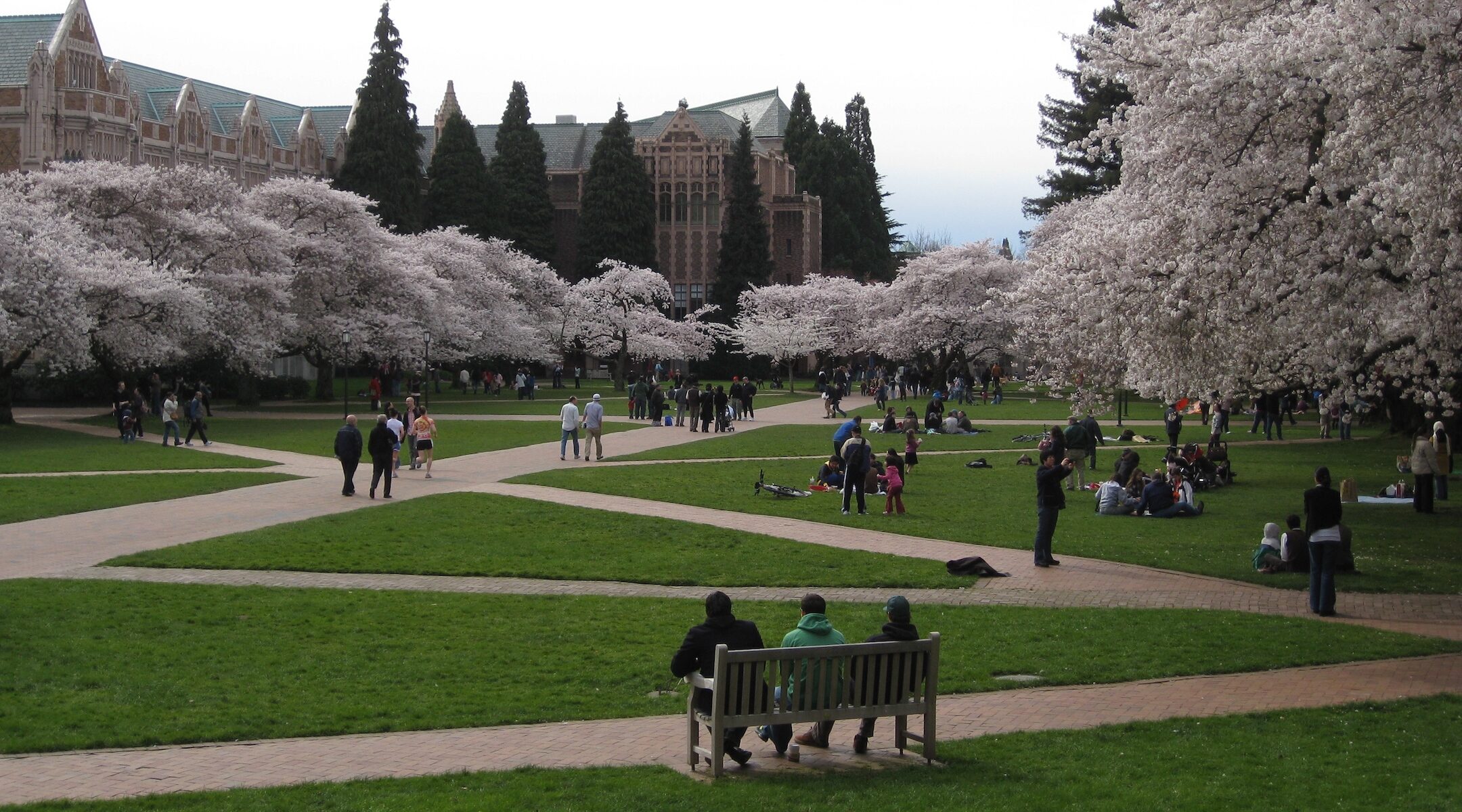 Cherry blossoms on the University of Washington Quad in Seattle, March 14, 2010. (Brewbooks via Creative Commons)
Advertisement

(JTA) – The University of Washington won’t actually have to curb its Israel studies program after giving back a $5 million gift to a donor who was unhappy about the program’s direction.

In fact, the university says, rescinding the gift — an unusual move in academia — is actually safeguarding the program’s future.

“The university is committed to supporting Israel Studies, including through additional community fundraising, and we believe that not returning the gift would be detrimental to these efforts and have a more long-term negative impact on the program and to Jewish Studies more broadly,” Victor Balta, the school’s senior director for media relations, told the Jewish Telegraphic Agency.

The university returned the endowed funds earlier this year after Becky Benaroya, the prominent Seattle philanthropist who donated the money in 2016, objected to the program’s chair signing a 2021 letter condemning Israel’s actions against Palestinians in Gaza that summer and asserting that “the Zionist movement … was and is still shaped by settler colonial paradigms.” The Jewish Telegraphic Agency and The Cholent, an independent newsletter about Jewish Seattle, reported the decision last week.

The Association for Jewish Studies and academic free-speech organizations criticized the university for agreeing to return the donation.

But the university did so only after refusing to allow Benaroya to change the terms of the gift agreement to prevent faculty from making political statements opposing Israel, Balta said.

The Israel Studies Program has another $6 million in its coffers from five years of accrued interest, university matching funds and other donations, Balta said, and it is still written into the bylaws of the university’s Stroum Center for Jewish Studies, where it is housed.

“The Israel Studies program at the UW is not on hold nor has its funding been eliminated,” Balta said in response to reporting last week from JTA that the program would no longer have dedicated funding and would need to be shut down.

Liora Halperin, the faculty member who is currently the Jack and Rebecca Benaroya Endowed Chair in Israel Studies and whose signature was a target of Becky Benaroya’s criticism, will also become a “new endowed chair” within the program, Balta said — this one unnamed.

Balta said that the major change to the program “will be the level of available discretionary funding.” Although “community fundraising” for Israel Studies will continue, the program will not be able to offer the same level of support for public events and research.

Halperin, who previously criticized the university’s decision to return the money, declined to comment to JTA on the latest developments related to her position. A person familiar with the situation said that the money would principally be used to cover the university’s financial obligations to Halperin, rather than fully funding the program in the manner it had been previously, and that the program’s ongoing funding remained in question.

The fact that Halperin and a handful of other UW faculty had signed the 2021 letter was the latest in a string of simmering disputes that had opened up between the Stroum Center and Seattle’s largely Sephardic donor class. Donors had told The Cholent that they felt disrespected by some faculty members when they saw courses being described in UW catalogs with the phrase “Israel/Palestine”; that Devin Naar, chair of the center’s celebrated Sephardic Studies program, had caused a seismic rift at his local Sephardic congregation by signing the 2021 letter and encouraging others at UW to sign it on Facebook; and that Halperin, Naar and Stroum Center director Noam Pianko were undermining donors’ initial goal of funding a program specifically to counter anti-Israel speech on college campuses.

Before withdrawing her endowment earlier this year, Benaroya had requested — and received — months of meetings among herself, Halperin and university administration at which she attempted to amend the terms of her agreement “to prohibit the holder from ‘political statements or signing agreements hostile to Israel’ and requiring them to teach about ‘Israel, not Israel/Palestine,’” among other proposed amendments, Balta said.

But, Balta said, the university “would not agree to these amendments.” Eventually, the two parties made the mutual decision to refund the money. Benaroya then reportedly redirected the funding to the pro-Israel activist group StandWithUs, which had advised her on how to negotiate with the university over the funds and whose representatives had been present at the meetings between her and the university.

The executive committee of AJS, an organization for Jewish Studies faculty, said in a Feb. 25 letter that UW’s decision to return Benaroya’s endowment “sets a very dangerous precedent by empowering the donor to enforce their political will — and to punish a faculty member for their beliefs — through the sheer fact of money given and the threat of withdrawing it or withholding future gifts.” The letter was addressed to UW President Ana Mari Cauce and Provost Mark Richards.

Pianko, who remains the Stroum Center’s director despite a different Jewish Studies donor requesting that he be removed for choosing to hire Halperin in the first place, is a former president of AJS. He resigned from that position in 2021 after revealing that he had met with a professor who had admitted to a years-long pattern of sexual misconduct.

In addition to AJS, more than 600 Jewish and Israel Studies academics have signed an open letter supporting Halperin. The letter, which predated JTA’s story and states that “Halperin was recently informed of her removal from the endowed chair she held in Israel studies,” was spearheaded by David Myers, the president of the New Israel Fund, professor at the University of California, Los Angeles, and Halperin’s former instructor.

Also criticizing the university’s handling of the controversy was the Foundation for Individual Rights in Education, a civil liberties group that focuses on campus speech. In a statement, the group said it was “concerned” by the school’s returning of Benaroya’s donation and called upon the university to disclose the terms of the endowment, saying, “If the decision was consistent with the terms of the endowment, the university should not have accepted it in the first place.”

In response to a JTA question about the university’s gift agreement policy, Balta said agreements “do permit amendments, including recission in cases where, as in this case, both parties mutually agree that is the best course of action.” Returning a gift, he said, “has been an extremely rare occurrence.”

Activism over gifts to university Jewish and Israel studies programs has come from both sides of the conflict. Last year, pro-Palestinian student activists at the University of California, Berkeley attempted to pressure its law school to reject a $10 million gift from the Helen Diller Foundation to bolster an institute focusing on Israel and Jewish studies. The effort failed, and today the money supports the Helen Diller Institute for Jewish Law and Israel Studies.