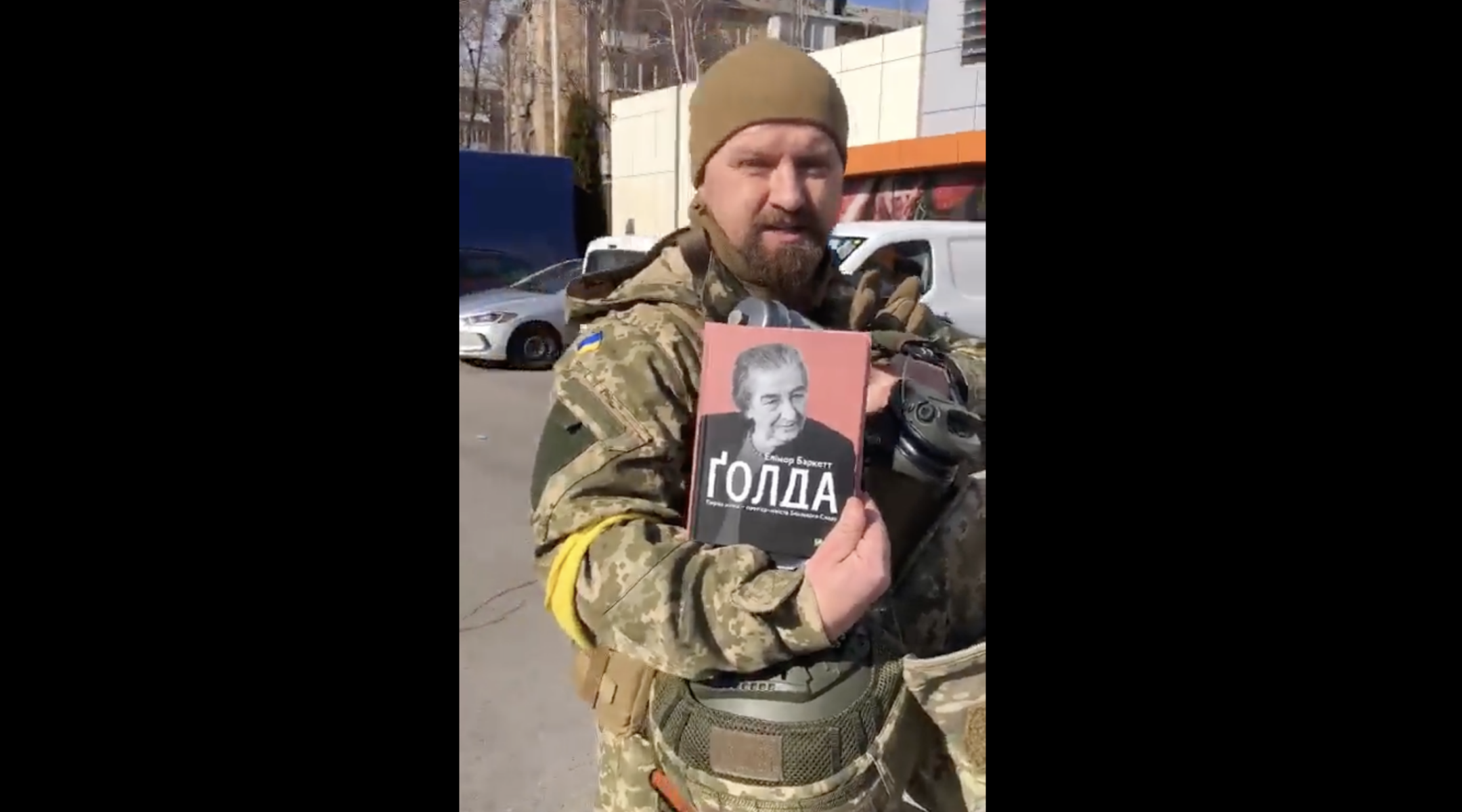 (JTA) — The most prominent Jewish figure in Ukraine right now is the country’s president, Volodymyr Zelensky. The runner-up may well be another country’s famous Jewish leader.

Golda Meir, the fourth prime minister of Israel and a native of Kyiv whose family fled amid antisemitic violence, has loomed large ever since Russia launched its war on Ukraine late last month. Her words have appeared in pro-Ukrainian memes, been quoted by Ukrainian diplomats and even been pulled from the backpack of a battle-ready Ukrainian soldier.

Almost as soon as the war began, memes riffing on a quote often attributed to Meir, adapted to the current conflict, began circulating online.

The author later clarified that the comment came from a Facebook post by an American missionary who had been living in Kyiv and who evacuated to Hungary and then returned to the United States this week.

But it is actually an adaptation of a quote widely attributed to Meir, who led Israel during and after the 1973 Yom Kippur War, which Israel won at great cost weeks after Egypt and Syria, which had amassed troops on Israel’s borders for months, invaded from multiple directions.

Meir’s comments — both confirmed and attributed — appear to have resonated widely with Ukrainians, who are in a fight for their country’s survival.

On Monday, after Zelensky addressed a group of American Jewish leaders, his ambassador to the United States extended the connection, saying that Meir was “a great woman who I admire.”

Russian President Vladimir Putin, Oksana Markarova said, “just wants us to stop being Ukrainians. He wants to demilitarize us, and he wants us to be neutral. Now of course, that means we have to agree to surrender and die. And here I can [paraphrase] a great woman who I admire [and who] was born in Kyiv and led the brave country of Israel: The Russians want us to die. We want to live so that doesn’t leave a lot of space for compromise.”

That paraphrase does sound like Meir, who famously discarded the idea of compromising with Israel’s Arab neighbors. “To be or not to be is not a question of compromise,” she told the New York Times in 1973. “Either you be or you don’t be.”

“It would be great to have her now with us,” Markarova said about Meir. “I think she would help a lot in this great fight.”

At least one soldier appears to agree. On Tuesday, an Israeli reporter encountered a Ukrainian soldier who pulled a hefty biography of Meir from his backpack. The soldier, who identified himself as Alex but said his nickname is “Zion,” said he keeps the biography — a Ukrainian-language translation of the 2009 book “Golda” by Elinor Burkett — alongside his night-vision device, water and hat.

“This is my favorite book,” Alex said. “I take it with me even if it will be my last battle.”

The reporter, Ron Ben-Yishai, asked him why he is such a fan of the Zionist leader. Alex answered, “Because I am a Zionist.” He’s not Jewish, the soldier said, but he is a Ukrainian patriot — and “I think that Ukraine have [to] say thanks to Jewish people.”

The video — which a journalist with Israel’s YNet News posted to Twitter accompanied by the comment, “I swear to you, it’s real” — cuts off there.

But whether Alex is suggesting that he and his fellow soldiers are emulating Israeli independence, or whether he went on to acknowledge Jewish contributions to Ukrainian history and culture, he would not be the first.

In fact, Meir has become something of an icon among Ukrainian leaders who are eager to claim her as a native daughter, according to a 2018 report in the Jerusalem Post. Ukraine was part of the Russian Empire when she lived there.

“The loose connection Meir had to Ukraine was enough for the [Ukrainian] state to embrace her as ‘one of our own,'” Eli Belotserkovsky, then Israel’s ambassador to Ukraine, told the newspaper at the time. “Today Ukrainian-Israeli relations are marked by a great deal of friendship and will to work together. When Ukrainian leaders mark the contribution Ukrainian Jews made to the creation of the [Israeli] state one of the first names to be brought up is Meir. This is a major turn of history as the place little Meir ran away from now, 120 years later, warmly embraces her.”

Ukraine held little romance for Meir, whose family was poor and unhappy in Kyiv and then, later, in Wisconsin, where they settled after coming to the United States in 1906. She frequently recounted the memory of watching her father batten down their home in preparation for a pogrom that ultimately did not take place.

“I can hear the sound of that hammer now, and I can see the children standing in the streets, wide-eyed and not making a sound, watching the nails being driven in,” one of her biographers, Francine Klagsbrun, wrote in 2017’s “Lioness: Golda Meir and the Nation of Israel.” In the Burkett biography that Alex carried, Meir is quoted offering another indictment, saying, “The Russia I knew was a place that men on horses butchered Jews.”

In Israel, Meir followed an improbable trajectory from being a poor immigrant to foreign minister, and then prime minister, a landmark position for a woman at that time. Like Zelensky, she became renowned for the way she laid out her country’s predicament among its neighbors to her countrymen and to the world.

“We say ‘peace’ and the echo comes back from the other side, ‘war,’” she once said, according to her New York Times obituary, in a comment that bears resemblance to ones in Zelensky’s public addresses throughout his country’s war. “We don’t want wars even when we win.”