Their country suddenly a pariah, Jews look for ways to leave Russia 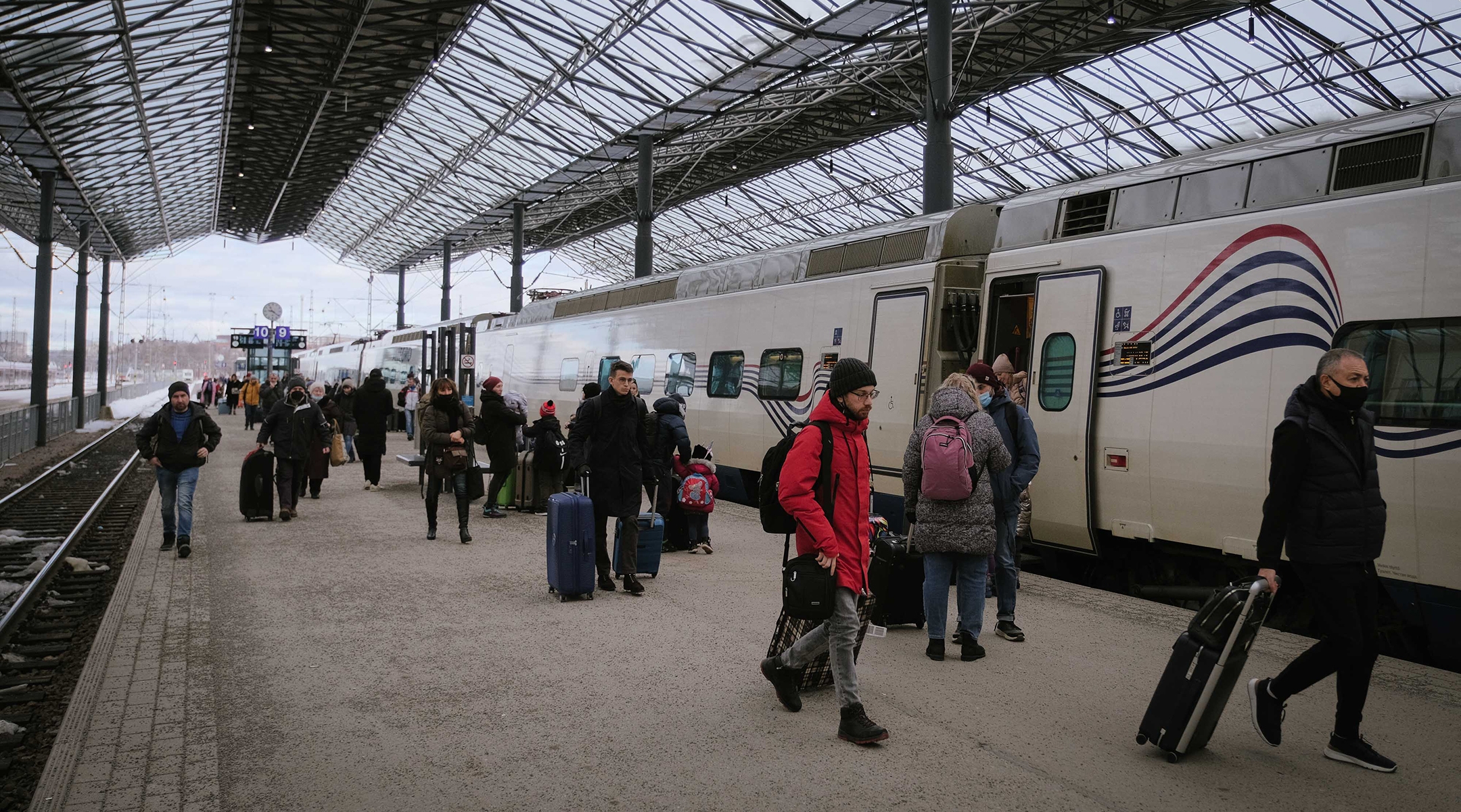 People exit an Allegro train at the central railway station in Helsinki, March 3, 2022. Trains to Finland are packed with Russians fearful that now is their last chance to escape the impact of Western sanctions. (Alessandro Rampazzo/AFP via Getty Images)
Advertisement

TEL AVIV (JTA) — “You’ll be calling until the mashiach comes,” one woman responded this week to a frantic query about embassy appointments on a Facebook group for Russians planning to move to Israel.

While Russians seeking to make the move, known as aliyah, may not have to wait until the messiah arrives, they are facing extended delays even as their country sinks into crisis because of the war their president, Vladimir Putin, launched last month against neighboring Ukraine.

In Moscow and St. Petersburg, wait times for appointments at the Israeli embassies have grown recently and now can be up to eight months. That is proving a challenge as many Jews there are making abrupt plans to leave their longtime home, driven by Putin’s strict crackdown on freedom of speech, shutdown of independent media outlets and criminalization of opposition to the war, as well as a wave of international sanctions on Russia that could drive many in the country into poverty.

“Everyone who has any hope of obtaining citizenship and leaving Russia is trying to do it,” an artist in Moscow told the Jewish Telegraphic Agency. The artist, who went through the immigration process before the war and will soon leave for Israel, requested anonymity because of fear around speaking to the press in Russia right now.

Over 2 million people have fled Ukraine since the invasion began two weeks ago, and Israeli authorities are anticipating potential tens of thousands of new immigrants as a result. Israel has already accepted 3,977 refugees from Ukraine, most of whom are not Jewish, according to the country’s most recent statistics. The Jewish Agency, the group responsible for overseeing Israeli immigration, describes the influx as “an unprecedented operation.”

But while scenes of Ukrainian Jews and their relatives arriving in Israel have captured global attention since the first flights arrived last week, less attention has been given to people on the other side of the war.

Israel has granted 1,400 entry visas to Russians since Feb. 24, according to Nativ, the government department dealing with immigration from the former Soviet Union.

Recognizing that Russia has rapidly become a more difficult and dangerous place, the country has eased its immigration process for Russians, although the embassy wait times are unlikely to be affected.

“Russian citizens requesting to make aliyah at this time are not required to have apostille signature on their documents or bring a police certificate,” a Nativ spokesperson told the Jewish Telegraphic Agency, adding that Russians can use a “previously received aliyah visa (even if it’s expired), and are not obligated to declare intention to settle in Israel.”

The Jewish Agency told JTA it is seeing “an uptick in interest” from Russia but that it was too early to tell whether that interest would translate into actual immigration or an ongoing trend.

On the ground, however, many Jews say they are starting to pack their bags, and in many cases, leaving a lot behind.

Ilya, a 42-year-old digital creative professional, arrived in Israel on the night of March 6. “The recent actions of the Russian government have left us no choice,” he said, citing the draconian crackdown of opposition to the war.

He managed to secure an Israeli passport in 2019, meaning he could simply board a plane with “no questions asked.” He said the process of obtaining citizenship had been “humiliating” — an appraisal shared by many Jews who run up against Israel’s efforts to scrutinize the family history or conversion status of aspiring immigrants.

“If you pass this purgatory, you will find the rest easy,” Ilya said, in sympathy with people who are having to go through the process in wartime.

With the Russian ruble falling to a new nadir daily, the new immigrants’ savings are worth less than ever. Ilya criticized the “hypocrisy” of economic sanctions, which he says mostly hit ordinary people “who are losing their jobs, access to their professional tools like Adobe products and can’t work for companies outside of Russia.”

Not everyone is ready to make the leap in the midst of the uncertainty. Another artist in Moscow, who requested anonymity because of conditions in Russia, said she has her flight tickets booked for the end of the month, but “problems with the banks” are stopping her from leaving immediately.

“Due to the blocking of cards, it is not possible to rent a house and buy food in Israel. And all my saving are burned out because of the exchange rates,” she adds.

Daniil Goldman and his wife Sophia moved to Israel one day before the war broke out. They decided to leave for “political reasons,” but the war was the “cherry on the cake,” they said.

They have also suffered from the tumbling values of the currency and Russian stocks — though they said they supported the sanctions that have sent the Russian economy into freefall.

As of Tuesday, Sophia’s Russian bank card no longer works in Israel following sanctions by Visa and Mastercard. “The harder the better, because nothing will change until Putin is deposed,” she said.

“Our life was brilliant,” they say. Daniil owns five bars — including one called Zionist and another called Mitzvah — and an anise distillation plant for arak, the Middle Eastern alcoholic spirit. They realized their time was up in Russia when Sophia became pregnant.

“I don’t want to raise children in a place like this,” Sophia said about Russia. “I don’t want to explain to my daughter you need to be afraid of the police, that there would be no justice if somebody did something to her,” she said, adding that they hope that they can return to a better Russia one day.

Sophia, who isn’t Jewish, describes the “terrible” process to get recognized as a partner by the Israeli government. For other Russians, many of whom are married to non-Jews, this has proved a decisive obstacle.

Katharina, who lives in St. Petersburg, said her 12-year-old son was harassed at school after questioning Russia’s invasion of Ukraine. After the teacher called her to complain about her child’s views, she realized that the situation at home was untenable.

Israel is potentially on the agenda, but she fears that the fact her husband isn’t Jewish will cause problems, even though he should be able to move with her under the Law of Return. Originally hailing from Ukraine, his home city of Bila Tserkva near Kyiv was heavily shelled. “He doesn’t eat or sleep,” she says. “If it wasn’t for our child, he would be volunteering to fight there.”

Katharina was telling her story over the phone to her friend Asya Engele, a Jewish poet who left Russia in 2016 to secure a better life for her disabled son. In her broad-windowed home in Jaffa which she shares with another Jewish Russian immigrant, Olga, they are hosting a friend who is laying low on a tourist visa until the situation calms down.

“My plan is not to emigrate. My plan is just to wait and think,” said their guest, Nastya. “I love my home,” she said but explained that she feared for her freedom given her anti-war activities.

Besides the many hardships, Russian Jews said they were also shocked by Putin’s justification of the war, citing neo-Nazi elements in the Ukrainian government. Asya, whose was grandmother Bluma was one of the few survivors of the Holocaust from her family, bluntly dismisses Putin’s “denazification” narrative: “Putin himself is the Nazi.”

“My heart is in pain for all my Russian friends,” Asya said. ”But I am so happy that I am here.”