A new kind of gap year: Israel allows a team of young Argentine Jews to play in its pro soccer league BUENOS AIRES (JTA) — Argentina is home to one of the most high-level amateur Jewish sports leagues in the world. Normally the young Argentine athletes who play in it, representing various Jewish community centers from different cities, are rivals on the field.

But this season, 18 of them came together to play on one team — in an Israeli professional league.

The development could be the start of a new programmatic trend and signals a new kind of international influence in Israeli sports, a realm that has historically kept strict caps on the number of foreign players on pro teams.

The squad of Argentine Jewish teenagers fresh out of high school has played in Israeli soccer’s lowest professional tier, the Liga Gimel, or Gimel League, since September (the league’s playoffs are currently in progress). The players have had work visas for the seven months — and they have also taken part in an educational program, consisting of Hebrew lessons, volunteer activities in Israeli organizations and tours.

It’s the brainchild of Argentine former soccer pro Fabian Grimberg, 57, who played in both Argentina’s and Israel’s top leagues — for Velez Sarfield in Buenos Aires (1980-1986) and various Israeli teams from 1988 to 1997. He lived in Israel for 14 years and now lives in Buenos Aires. 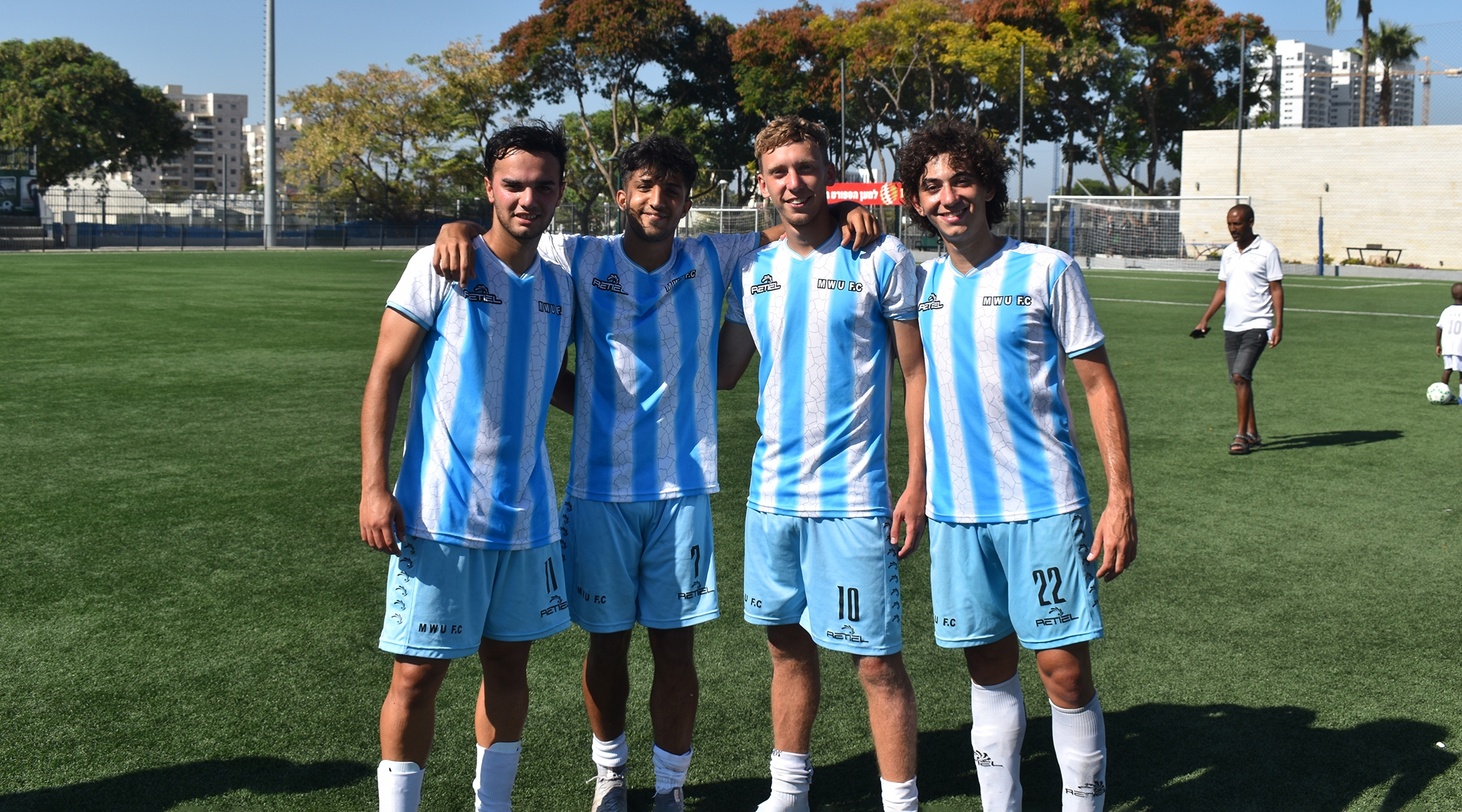 Argentine Jewish families often push their children into non-athletic careers, Grimberg said, and he saw an opportunity to give young Jewish athletes a taste of the professional athlete life before their time at universities. He worked with several other organizations, including Maccabi World Union, the group that organizes the Maccabi Games for international Jewish athletes; Maccabi Israel; and Masa Israel, a governmental organization that offers programming to young Diaspora Jews.

The end result became a mix of Birthright-style programming and professional sport, and it has been a resounding success — other Israeli leagues are looking into duplicating it, and Jewish athletes in other countries are looking to form their own national teams, of sorts. Argentina’s Ambassador to Israel Sergio Urribarri invited the team to his embassy for a visit in October, just weeks after the program started.

“I know a lot of very good players, but Jewish families do not always support the idea of a professional soccer career, in some cases they prefer to focus on a university career,” Grimberg told the Jewish Telegraphic Agency. “Sometimes they don’t want the kids to face the tough environment of sport — that includes some expressions of antisemitism — so I designed a program of a gap year before university, for them to experience Israel and the opportunity of being a soccer player.”

The team, called Maccabi World Union Football Club (or MWU FC) and coached by an Israeli-Chilean named Uri Kohan, has fit into the level of play perfectly. They finished second in their half of the league and now are competing in the playoffs. The Argentine team has opened the door for players from other South American countries to compete in the league. (Nicolas Cassab)

Maccabi Tel Aviv, in the top Israeli league, has provided their facilities to the Argentine team for training, and offered activities with their players for inspiration.

Federico Jaratz is the team’s goalie and has shared an apartment in Tel Aviv with five of his teammates.

“I like the fact that we train almost every day,” he said. “The overall experience is amazing.”

The players aren’t paid, but they have their living expenses covered and have earned exposure that could lead to careers in the top Israeli league: a few teams, such as the Israeli Premier League team Ironi Ashdod, have expressed interest in signing some of the players.

“After the educational program ends for the whole team, then the professional stage could start for individual players,” Grimberg said.

The Israeli Soccer Association has never allowed in a team entirely made up of foreign players — normally, Israeli professional sports teams are only allowed to have a few foreign players on their rosters, to help promote local athletes. Many international players attempt to become Israeli citizens before joining their teams, to help them avoid that restriction. Some of the Argentine players are considering that route, Grimberg said.

Grimberg is already recruiting a second squad for next year, but Jewish groups in other countries — and other sports leagues in Israel — have taken notice. This year, Israel’s professional soccer and basketball leagues will look to recruit players from Brazil, Cuba, Chile, Italia, Mexico, Panama, Paraguay, Spain, Uruguay, Venezuela and the United States to play in their lower tiers.

“The program expects to bring candidates from all over the world,” said Ginette Bar-Levav, program director for the Maccabi World Union’s Yachad programming arm.