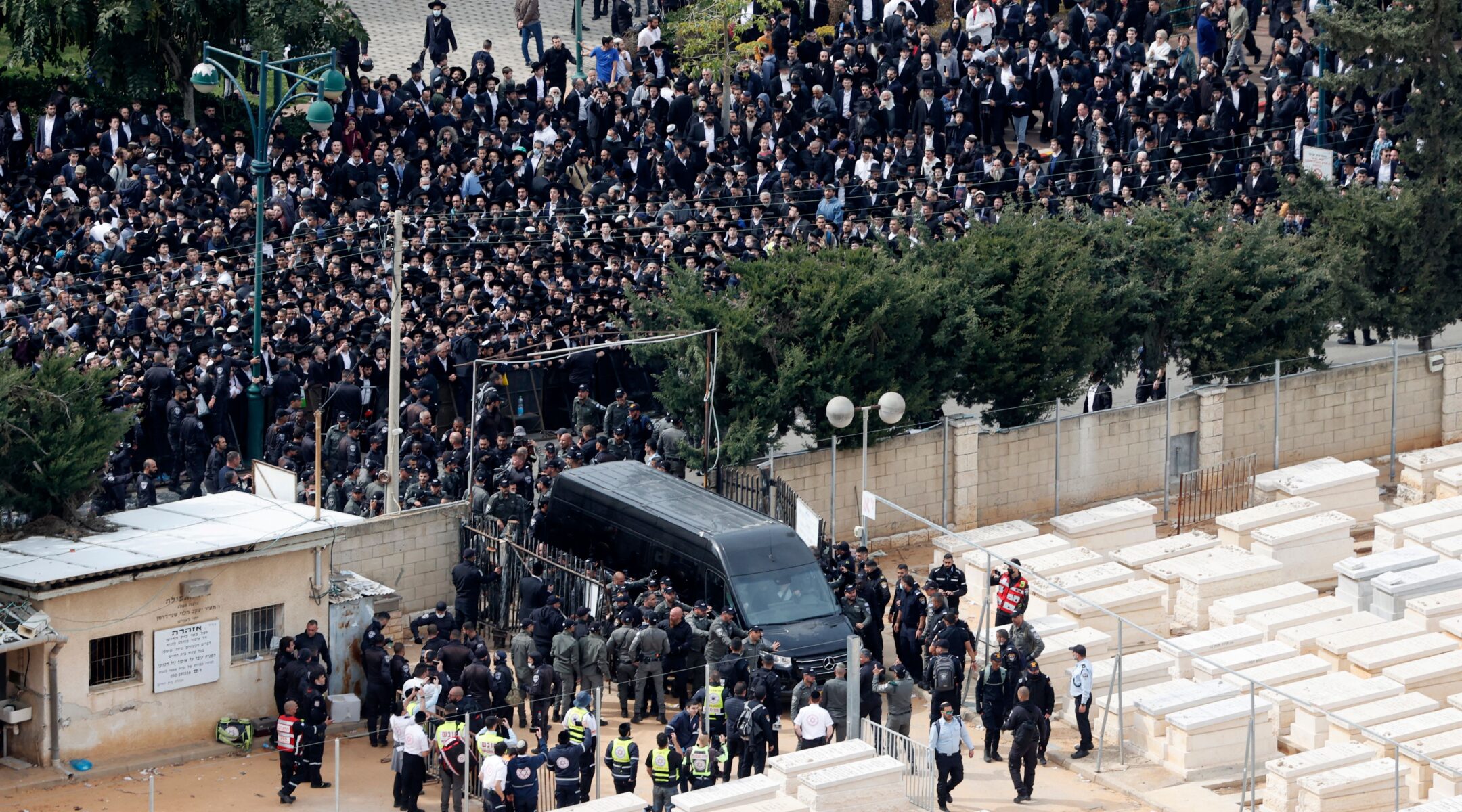 Jewish mourners wait outside Ponevezh community cemetery in the city of Bnei Brak near Tel Aviv in central Israel during the funeral of haredi Rabbi Chaim Kanievsky, March 20, 2022. (Jack Guez/AFP via Getty Images)
Advertisement
BNAI BRAK, Israel (JTA) — As many as 1 million mourners attended the funeral of the leader of the haredi Orthodox community, Rabbi Chaim Kanievsky, on Sunday afternoon in the central Israeli city of Bnei Brak, making it the largest funeral in Israel’s history.

Kanievsky, who died Friday afternoon at age 94 after suffering a massive heart attack, was a scion who was known by his followers as “The Prince of Torah.”

Roads and highways leading into the haredi Orthodox city were shut down Sunday morning. Public buses packed to the hilt stopped at the border of Ramat Gan and Bnei Brak and passengers were forced to walk the rest of the way.

For one passenger, Hudi Rosen, missing the funeral was out of the question.

“I feel like my father died, so of course I should be at the funeral,” Rosen, a 21-year-old yeshiva student originally from Manchester, England, told the Jewish Telegraphic Agency.

News of Kanievsky’s death came as a shock to Rosen and his fellow students, who were in the middle of their yeshiva’s Purim meal and mostly inebriated when they heard.

“It was mental. Very intense. It went quiet for 20 minutes. And then people started crying,” he said. 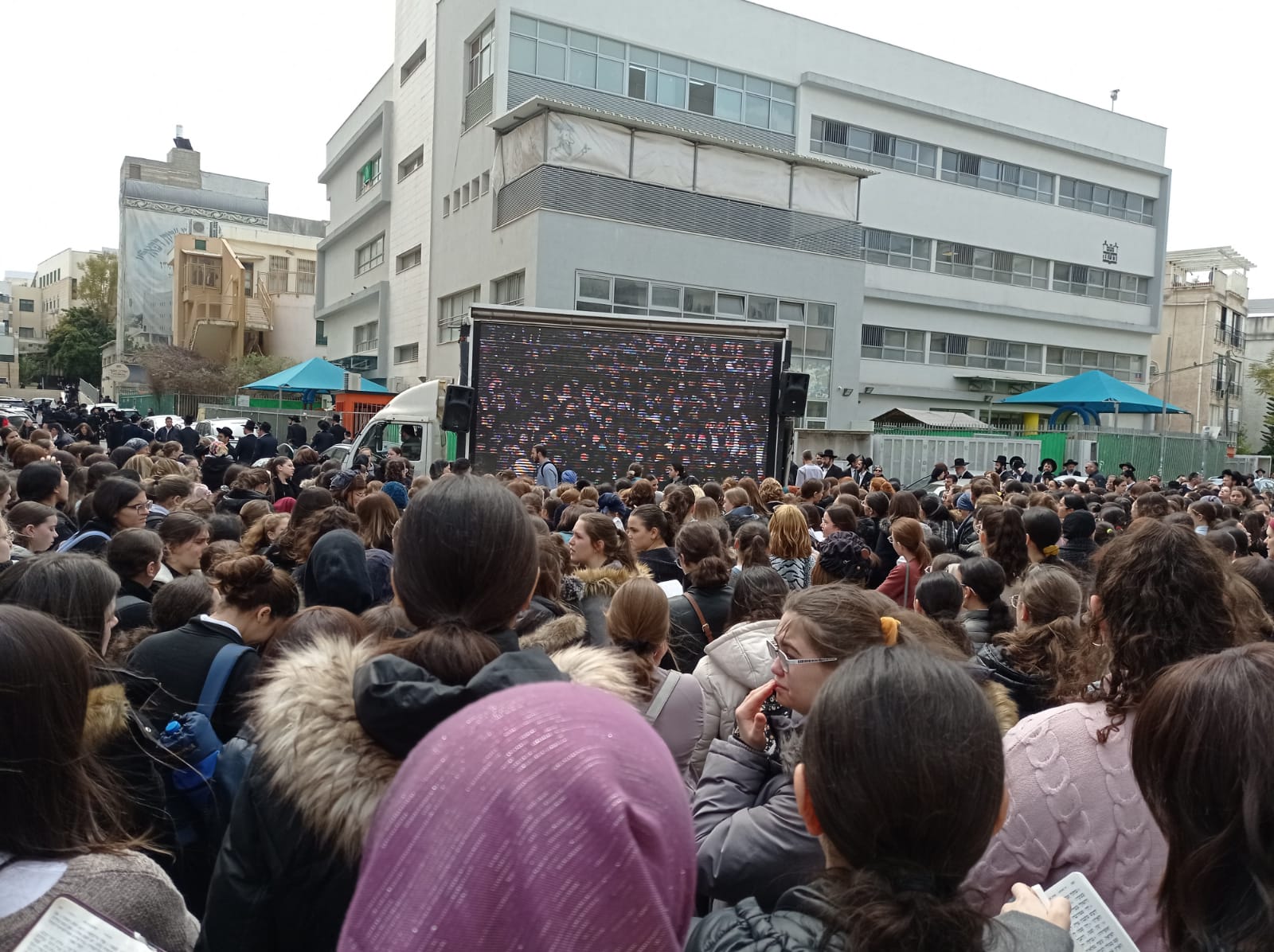 Thousands of men escorted the late leader’s body from his home on Rashbam Street to his final resting place close to the grave of his uncle, Rabbi Avraham Yeshayohu Karelitz (the “Chazon Ish”) in the Zichron Meir Cemetery. Only close members of family and senior public figures, including Israel’s chief rabbis, were allowed into the cemetery for the actual burial. However, thousands of people broke through the police barriers into the cemetery and some were detained.

Women were instructed to stay away from Chazon Ish Street, the main thoroughfare through which the procession would take place, and to stand in a cross street where huge screens livestreamed the eulogies. At several points, the livestream crashed, silencing the booming voice of the eulogizing rabbis. An eerie quiet filled the streets, with only the occasional sob breaking the silence. Women with strollers and small children were crammed together, some sitting on cars and building walls. Faces filled every window of every building lining the streets.

Asked why she had brought her young children, one of whom was crimson from crying, to such a crowded area, Bnei Brak resident Ruchi Cohen answered that Kanievsky’s funeral was a historic moment.

“This will leave an impression on their souls forever. Everyone who can attend the funeral of this gadol hador [giant of the generation] will merit a place in the World to Come,” she said, referring to the Jewish concept of the afterlife.

Cohen added that Rabbi Yerachmiel Gershon Edelstein, Kanievsky’s heir apparent, had instructed that all children over 9 attend the funeral and that all residents of Bnei Brak tear their outer garments, reflecting the traditional Jewish mourning ritual. 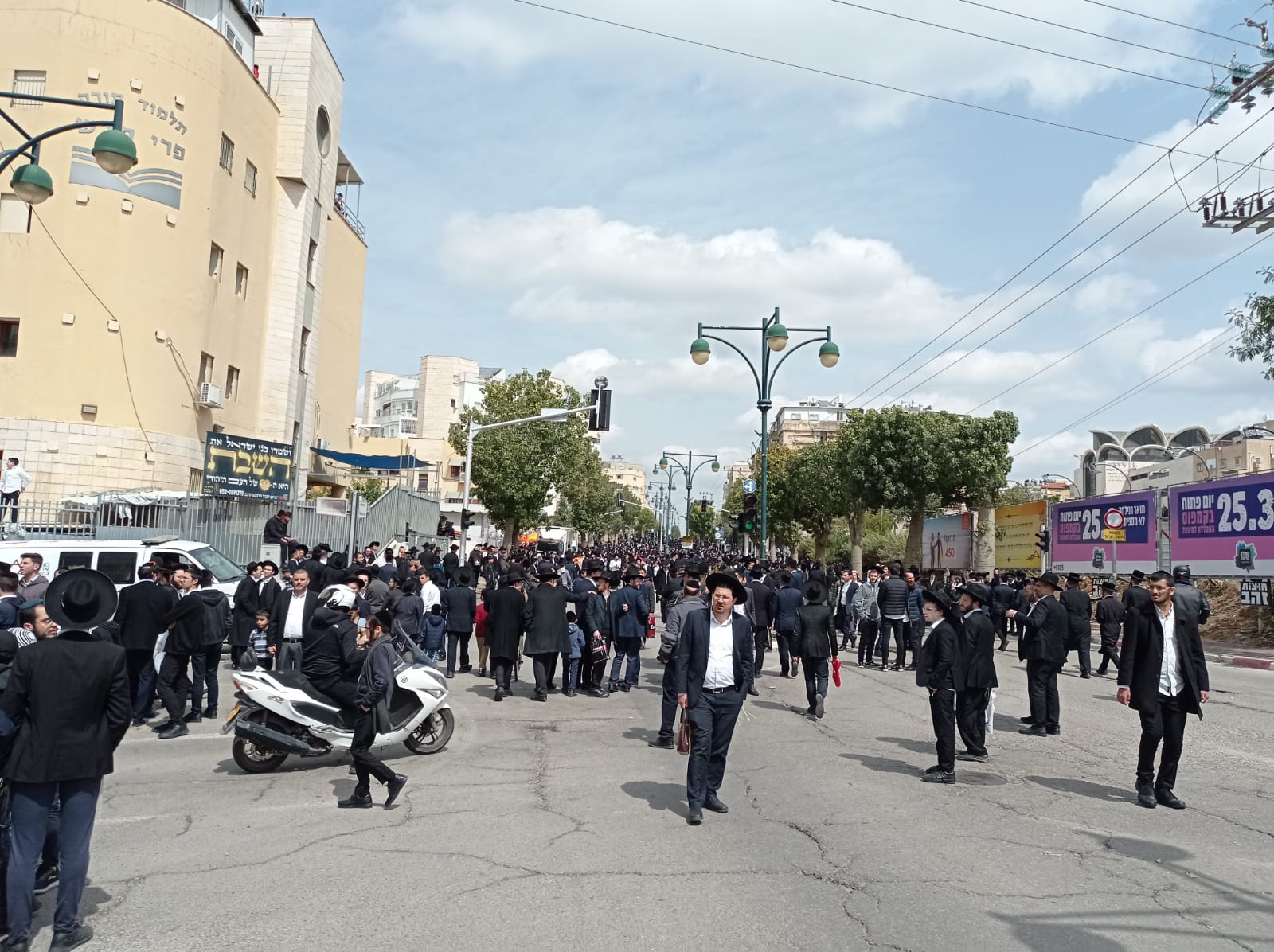 The streets of Bnei Brak, Israel, were filled with hundreds of thousands of mourners for the funeral of Rabbi Chaim Kanievsky, March 20, 2022. (Deborah Danan)

Despite concerns about crowd control that prompted Israel to largely shut down for the funeral, there were few major incidents. Several dozen people were treated at the scene by medics and three were evacuated to a nearby hospital after fainting. The MDA rescue service said no serious injuries were recorded.

Earlier in the day, Prime Minister Naftali Bennett had warned that the mass gathering could take a calamitous turn as occurred in 2021 in the northern Israel pilgrimage town of Meron in 2021 when 45 people were crushed to death.

“The funeral is a mass event, and we must make sure that it does not end — God forbid — in a mass disaster,” Bennett said.

“The trauma of the Meron disaster is still fresh for all of us. This tragedy must not be repeated,” Bennett said.

He added that Kanievsky’s death marked “a great loss to the Jewish people.”

According to the Bnei Brak municipality, around 750,000 people had gathered in the one square-kilometer area designated for the funeral procession in the hours before it was due to start.

Hillel Graineman, an EMT with United Hatzalah, explained that many precautions had been taken to avoid what he called, “Meron 2.” Hundreds of ambucycles, 45 ambulances and popup clinics belonging to the emergency organization were stationed around the area and drills had taken place well into the night together with MDA to deal with possible scenarios, especially surrounding the task of crowd-dispersal in the case of an emergency evacuation.

“Everyone knows where they’re supposed to be,” Graineman said. “We learned many lessons from Meron.”

Yoni Danan, who was present during the Meron disaster, said he was nervous to attend the funeral.

“Of course it crosses your mind. I was up last night wondering whether to take my son or not. But how could I not? [Kanievsky] is his hero — he’s every [religious] boy’s hero — I couldn’t take that away from him,” he said.

He said the crowds he witnessed at Rabbi Ovadia Yosef’s funeral in 2013, attended by an estimated 850,000 people, and those the night the Meron tragedy occurred did not compare to the crowds gathered in Bnei Brak.

“I’ve never seen anything like this before,” he said. “Still, it’s not a bottleneck situation like Meron was.”