What Zelensky gets wrong about the Holocaust in Ukraine 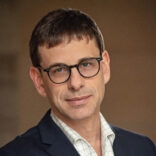 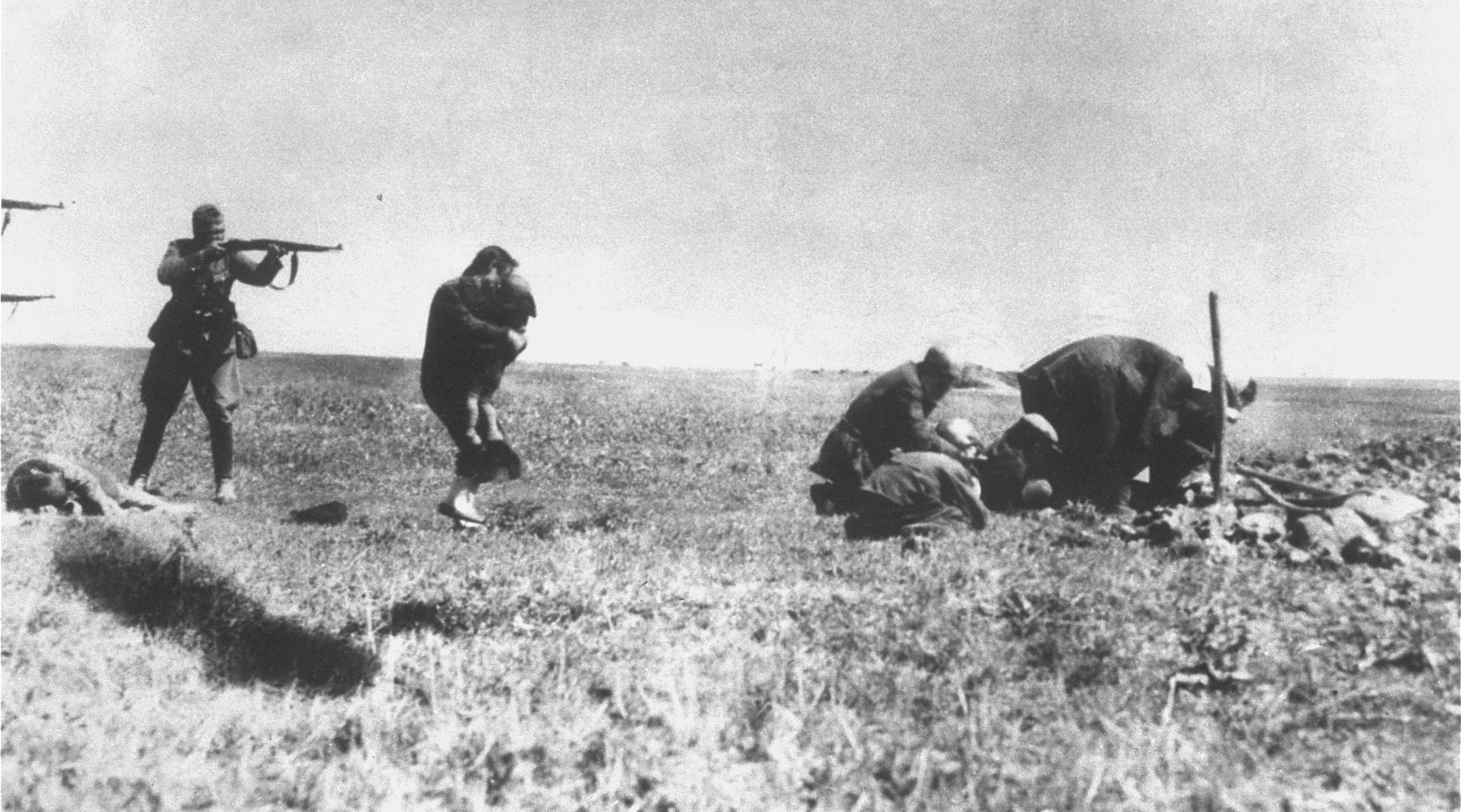 A photo of one of the German army mobile killing units, or Einsatzgruppen, shooting Jews near Ivangorod, Ukraine, in 1942 was mailed from the Eastern Front to Germany and intercepted at a Warsaw post office by a member of the Polish resistance collecting documentation on Nazi war crimes. (Historical Archives/Warsaw)
Advertisement

(JTA) — In his March 20 speech to Israeli lawmakers, Ukrainian president Volodomyr Zelensky invoked the Holocaust as analogous to what his country is currently experiencing.

“I have the right to this parallel and to this comparison,” he said in his video address.

But as a historian of the Holocaust in Ukraine, I know how problematic this comparison is. Zelensky, who played a history teacher on TV, should know better, too.

The war is horrific, and Russia’s apparent deliberate targeting of civilians is abominable. But like most wars, this war is being fought over the political control of a territory and the sovereignty of a people; unlike the Holocaust, it is not an attempt to murder every single member of an ethnic, racial or national group. In contrast to Zelensky’s assertion, the threat is not the same.

For example, Zelensky could, theoretically, turn over the power of government to a Russian appointed puppet and allow his people to live as a Ukrainian minority within an oppressive Russian state. It’s not a good choice, but it is a choice. The Nazis provided no such option for the Jews of Europe. There was no choice that led to physical survival, no offer to surrender.

Russian President Vladimir Putin, too, has invoked the Holocaust when justifying his invasion of Ukraine, claiming that it was his intention to “denazify” the country. That, too, is disingenuous. Ukraine is a free and democratic state, with a government that was popularly elected and that has, for the most part, protected the rights of all its citizens.

It is little wonder, though, that the Holocaust has such resonance in Ukraine. Over one quarter of the Jewish victims of the Holocaust, approximately 1.5 million people, were killed within the territory of what is now Ukraine. Millions of non-Jewish Ukrainians also perished under German occupation as prisoners of war, slave laborers, soldiers, partisans, and ordinary townsfolk and peasants. Zelensky is right that the war was “a tragedy for Ukrainians, for Jews, for Europe, for the world.”

Urging Israel to provide more military aid to Ukraine, Zelensky asked the “people of Israel” to make a choice, just as Ukrainians made their choice 80 years ago. With 2,673 Ukrainians recognized by Yad Vashem for their efforts to save Jews, Zelensky can legitimately boast that “Righteous Among the Nations are among us,” as he did in his speech. But this claim obscures the role that far more Ukrainians played in collaborating with the Germans and facilitating the murder of their Jewish neighbors.

The Germans knew that Ukraine would be fertile ground for their exterminationist plan. As I show in my recently published book, “In the Midst of Civilized Europe: The Pogroms of 1918-1921 and the Onset of the Holocaust,” only 20 years earlier, Ukrainians opposing Bolshevik rule had murdered tens of thousands of their Jewish neighbors. The Jews and the Bolsheviks, they had falsely claimed, were one and the same.

The Nazis purposefully revived this myth. They enticed Ukrainians to assist in murder as revenge for the crimes the Bolsheviks had inflicted in Ukraine — mass arrests and executions, and, most notably, forced grain requisitions that had resulted in a famine killing 3.5 million people in 1932-1933.

In Lviv, the first major city the Germans captured in Ukraine, Ukrainian soldiers recruited from abroad with the false promise of German support for Ukrainian statehood, rounded up Jews and threw them to the crowds. “They were beating up Jews, killing Jews, beating them to death on the street,” recalled one witness. German special units with the collaboration of Ukrainian auxiliary police and militia killed between 2,000 and 5,000 Jews in the city in July 1941.

Similar scenes were repeated elsewhere. During the first month of the German invasion, between 12,000 and 35,000 Jews were killed in eastern Galicia and western Volhynia — two regions that the Soviet Union had taken from Poland in 1939. Many of these massacres were perpetrated by locals, and some without even a German presence. “The ones that did the shooting, and the ones that did the arresting, and the ones that carried out these atrocities were not Germans; this was the local Ukrainian police,” recalled Simon Feldman of Boremel.

As the Germans moved further east into Ukraine, they intensified their massacres. In hundreds of locales with the assistance of local Ukrainian collaborators, they gathered Jewish men, women and children, marched them to the outskirts of town, stripped them naked, and shot them in ravines or trenches. Locals were then permitted to scavenge the clothing of the dead. The organization Yahad in Unum, which has been mapping Holocaust-era mass graves, has identified nearly 1,000 such sites in Ukraine.

After an initial wave of killing during the German advance, the German military established some 250 ghettos in Ukraine and required Jews to wear armbands with stars. Ukrainian police enforced the regulations. In contrast to the walled ghettos established in Poland, in Ukraine ghettos tended to be more porous, marked by barbed wire and sometimes only with signs. They were never intended to be permanent. By spring 1942, most of the ghettos were liquidated, and another 500,000 Jews were murdered.

Because so many Jews were killed at close range, near their homes, by conventional weapons, historians have termed German atrocities in Ukraine the “Holocaust by Bullets.” Indeed, by the spring of 1942, before most of the death camps in German-occupied Poland began operating, nearly two-thirds of Jews in territories now part of Ukraine had been exterminated.

Addressing lawmakers around the world, Zelensky has repeatedly sought to invoke traumatic moments in each country’s history — the London Blitz in his speech to the British parliament, 9/11 and Pearl Harbor in his address to the U.S. Congress and the Berlin Wall in his address to the German Bundestag.

It’s understandable that Zelensky is making use of whatever reference points he think will help his country. It’s also true that Jews like Zelensky who grew up behind the Iron Curtain didn’t learn this history in the same way or on the same timeline as Jews living in the rest of the world. And I’m sympathetic to the idea, expressed by Israeli leaders to rebuff criticism of Zelensky after his speech, that we can all cut some slack to a world leader in a situation of life and death.

Still, Zelensky’s voice matters. And when he utters untruths about the Holocaust, it’s important not to let them stand.

Jeffrey Veidlinger
is Joseph Brodsky Collegiate Professor of History at the University of Michigan and the author of ”In the Midst of Civilized Europe: The Pogroms of 1918-1921 and the Onset of the Holocaust.”
The views and opinions expressed in this article are those of the author and do not necessarily reflect the views of JTA or its parent company, 70 Faces Media.