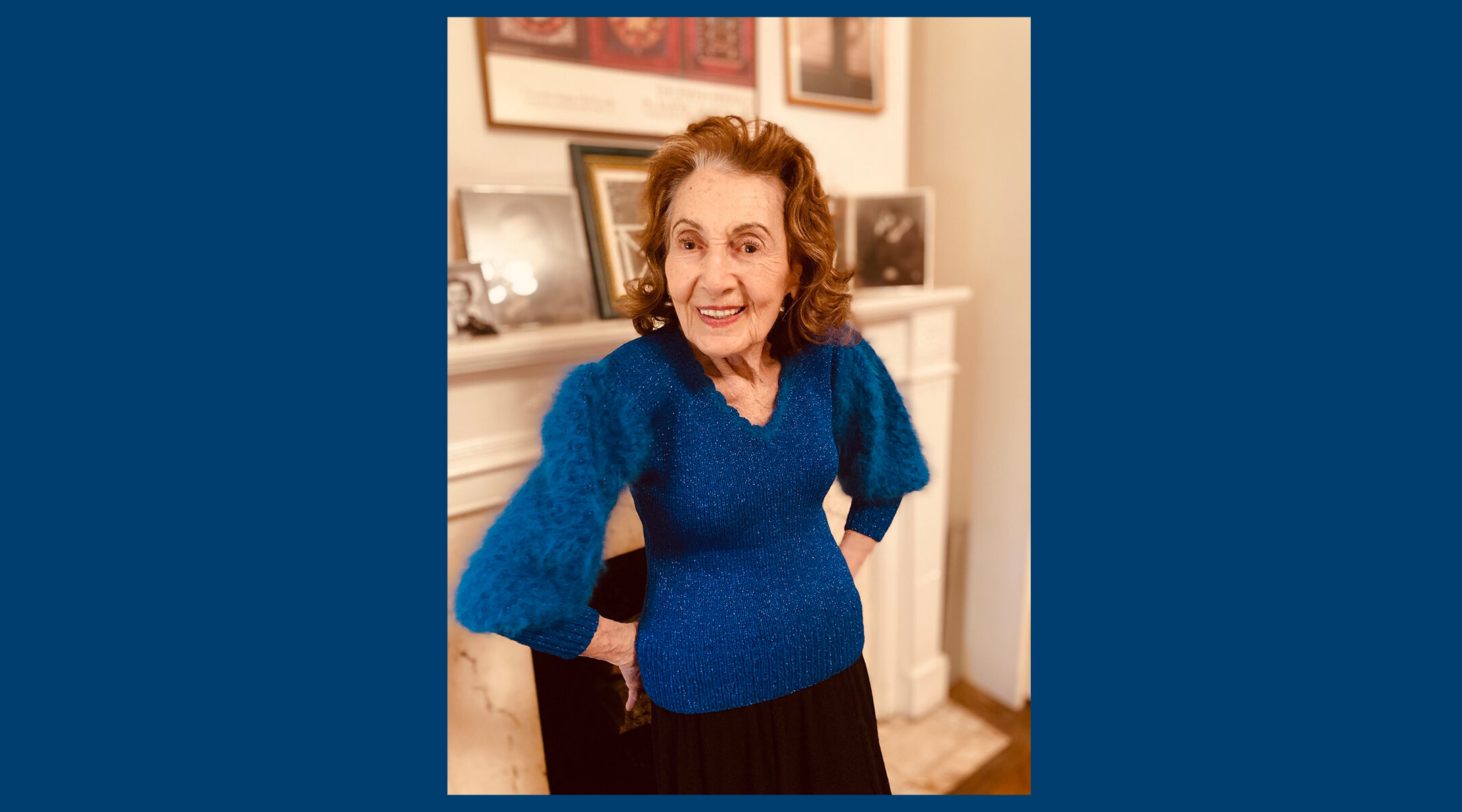 Holocaust survivor Helena Weinstock Weinrauch, 97, models the hand-knit sweater that she's worn to the first Passover seder every year for the past 75 years. (Karen Goldfarb)
Advertisement

(New York Jewish Week) — Every Passover for the last 75 years, Helena Weinstock Weinrauch, a 97-year-old Holocaust survivor, has worn a vibrant blue hand-knit sweater to the first seder, which her neighbor hosts in her Upper West Side apartment building.

The sweater is a chic, 1940s number with fluffy angora sleeves, a sparkling metallic blue bodice and a delicate, scalloped V-neck. But this is no ordinary fashion statement. The sweater was knit by Helena’s friend, Ann Rothman, who stayed alive during the Holocaust by knitting for Nazi wives while a prisoner in the Lodz Ghetto.

Rothman was motivated to survive and, as Weinrauch tells it, “She became known in the ghetto. She was so good at knitting that she knitted coats for the wife of the German people and it became known that Ann can knit skirts, a blouse — anything you want, she can knit it.”

When I first met Weinrauch in person in December 2021, I was struck by her classic, Old Hollywood-like glamor, her storytelling and her pride in the many sweaters her friend had knit for her throughout their decades of friendship. Tiny in stature, with a soft voice, Weinrauch’s presence filled the room. I hung on her every word.

When she spoke of her brilliant blue Passover sweater — which she treats as a ritual object — she seemed to sparkle like its bright blue bodice. When neighbors or other seder-goers in her building noticed her unusual sweater, she’d say, “It’s the Passover sweater,” as if everyone has one.

After meeting Weinrauch, I was convinced that she was onto something: Everyone should have a Passover sweater — and not just because it is beautiful and festive. For Weinrauch, the sweater holds the power of remembrance, freedom and connection. And she’s far from the only one to make the connection between crafting, resilience and religious observance. In her 2020 book “Painted Pomegranates and Needlepoint Rabbis,” Jodi Eichler-Levine, Berman Professor of Jewish Civilization at Lehigh University, draws upon ethnography to study the power of craft for the Jewish People. “If we look at Judaism as an ever-evolving process, then Jewish crafts — which are all about process — can help us to see how many vital Jewish practices take place outside of synagogues,” she told me.  She also reflects on the power of crafted objects, describing them as “talismans of safety and resilience.”

Eichler-Levine’s book is about how crafters keep Judaism alive. She studied how “everyday acts of creativity are a crucial part of what makes a religious life,” and learned that “the act of making is just as important as the object itself, particularly in troubled times.”

As Eichler-Levine notes, “Crafting is an act of generative resilience that fosters the survival of both giver and recipient.”

These words resonate with me deeply on a personal level. Knitting became central to my healing after my 13-year-old son underwent brain surgery in January 2017 — I left my career behind and assumed the role of full-time mother of a child in constant pain. Over the course of his long recovery, knitting, I realized, was the key to stitching myself, and my family, back together.

After a long, three-month period of recovery, my son returned to school. Shortly afterwards, I read a story about Weinrauch in Moment Magazine. It struck a nerve. It combined my passions for all things Jewish, knitting and the incredible juxtaposition of the two, igniting within me a drive to know more. I wondered how women knit to stay alive, what other knitted objects I might find. I launched a project, Knitting Hope, which aims to share the ways knitting or knitted objects helped women to resist, remember those they lost, and find renewal after the horrors of the Holocaust.

I knew, straight away, that Weinrauch’s Passover sweater would be an important knitting project to share with the fledgling community of knitters, survivors and supporters that I was building. Weinrauch’s life, after all, is a lesson in resilience: She survived a three-day-long interrogation by the Gestapo, three concentration camps, the Death March from Auschwitz to Bergen-Belsen, and near-death starvation.

Her parents, sister and 16 other family members did not.

But Weinrauch did not just survive the horrors of the Holocaust — she built a life filled with love and beauty. When the war ended, she was nursed back to health in Sweden, which took thousands of Jewish refugees. “The Swedish people restored my faith in humanity,” she said, adding that she’ll “never forget their humanity.”

In Sweden, she volunteered at a hospital where she “never took a dollar,” in order to repay the Swedish people for their efforts. Then, in 1947, Weinrauch connected with one of her only living family members, a step-uncle in the U.S. She lived with him for a short time in New York City, which is where she met and married Joseph Weinrauch, who became a successful travel agent.

When the two sought to start a family, Weinrauch experienced multiple miscarriages which she attributes to all the trauma she endured.  When Weinrauch finally conceived, her doctor ordered her to strict bedrest — and that’s when she taught herself how to knit, because she was “going crazy in bed.” 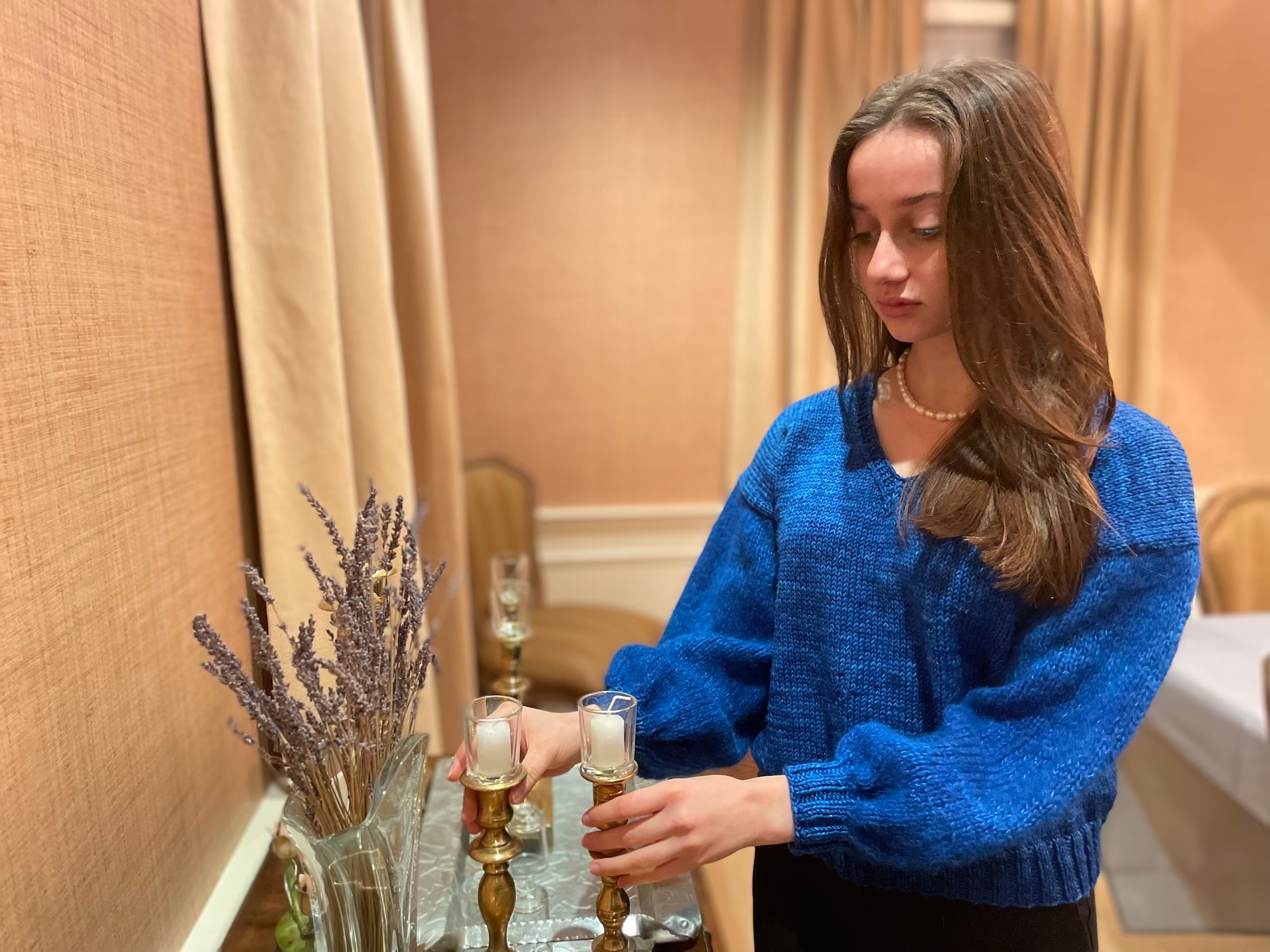 Inspired by Weinrauch’s story, the author is hosting a knit-along for anyone wishing to make their own, updated version of the Passover sweater. (Tanya Singer)

Weinrauch gave birth to a daughter, Arlene, in the early 1950s. She died from breast cancer in the 1990s. Weinrauch’s husband went into a deep depression and died in 2006 — and she was alone once again.

Not one to wallow, in 2013, when a flier from a local dance studio landed in her mailbox, Weinrauch, then 88, decided to learn ballroom dance — which enabled her to feel joy in moving to music. These days,  her closets overflow with beautiful, beaded gowns, and every room in her apartment features photos of her beaming at ballroom dance events. As she quips in the documentary “Fascination: Helena’s Story”: “As long as I can walk, I will dance.”

In hopes of preserving other aspects of her incredible story — and, of course, that fabulous sweater — I reached out to Chicago-based knitwear designer Alix Kramer and asked her to develop a knitting pattern as a homage to the Passover sweater. She immediately said yes. “As a Jewish knitwear designer, Jewish advocacy has always been a passion, especially when it comes to carving out space in the vast knitting community for Jewish patterns to thrive,” she told me. “I knew immediately that this could be a ‘pattern to launch a thousand ships,’ so to speak. The idea of a blue sweater revolution, with blue sweaters at every seder to symbolize resistance, hope and community, was what ultimately called me to the project.”

The Dayenu pattern, as we’ve named it, created as a contemporary homage to Weinrauch’s original sweater, is now available on the popular knitting site Ravelry and on Payhip. The cost is $10, and 20% of pattern sales will be donated to KAVOD, an organization that provides emergency aid like food and medicine to Holocaust survivors.

In these weeks leading up to Passover — which begins this year on the evening of April 15 — Kramer and I are hosting a virtual knitting circle, or a knit-along. Though knit-alongs are common practice in the wider knitting community, so far as I am aware, none has invited Jewish knitters to join in creating a garment for a Jewish holiday, and certainly none has drawn so profoundly on Jewish themes of remembrance and freedom. Special guests include Jayna Zweiman, co-creator of the Pink Pussyhat; Karen Goldfarb, the filmmaker behind “Fascination: Helena’s Story,” and Stephanie Butnick, host of the podcast Unorthodox. While created with Jewish knitters in mind, the circle meets weekly and is open to knitters and non-knitters alike, and to people of all faiths.

The knit-along is free and knitting is optional. Each week, we’ll be joined by a special guest, who will shed light on Passover, Helena’s story and the power of knitting. Join by zoom by registering for emails at KnittingHope.com.

Bonus: Join the New York Jewish Week this coming Sunday, April 3, at 7:30 PM ET for a Knitting Circle hosted by Tanya Singer, the author of this piece, who will provide more details about the Passover sweater, as well as provide tips on how to knit your own matzah cover ahead of the holiday. From beginners to experts, all levels are welcome. Free. Learn more and sign up here.