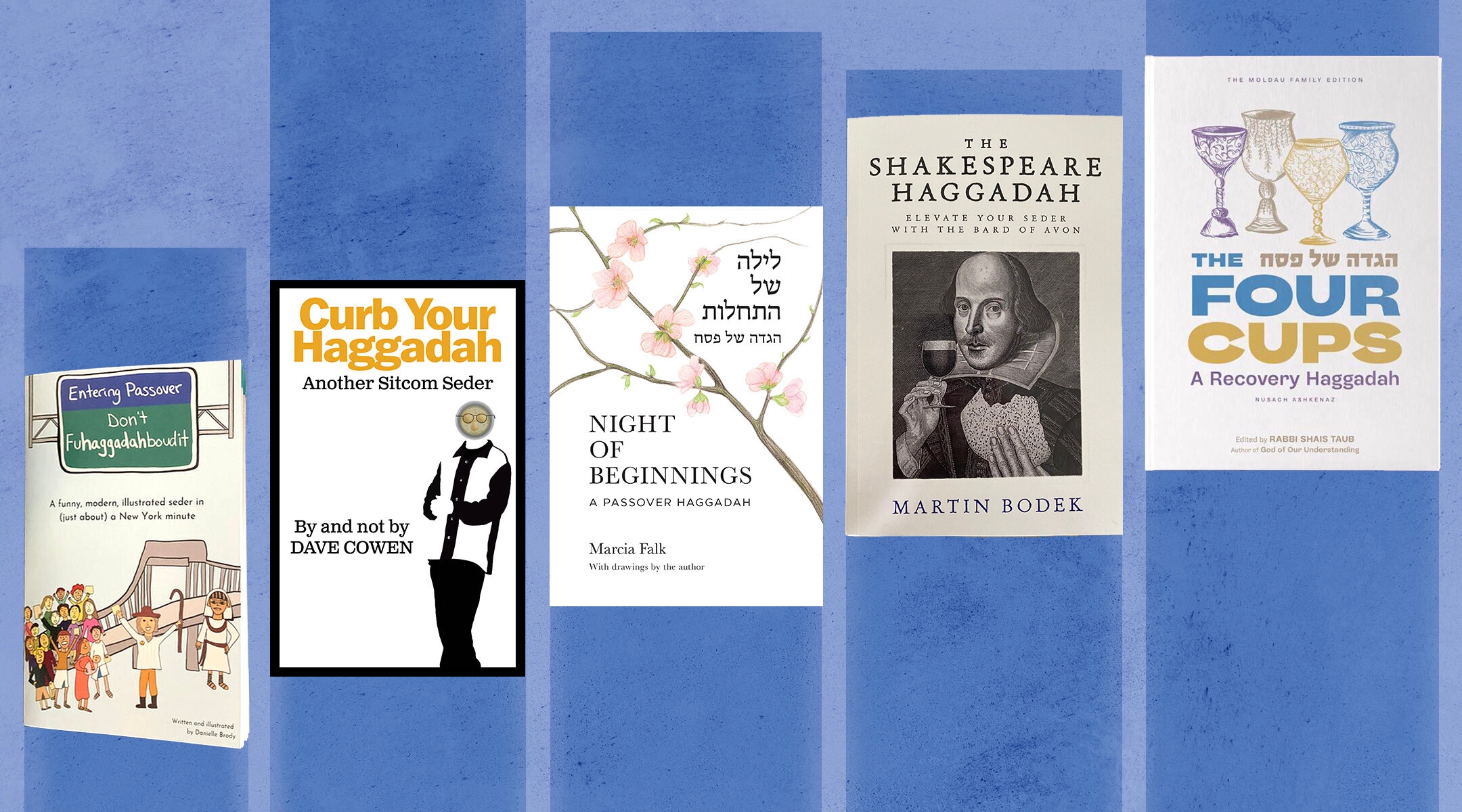 A collage of 2022 haggadot covers. (Collage by Grace Yagel)
Advertisement

(JTA) — The main components of the Passover seder – a word that literally means “order” – remain constant over time. But the style doesn’t have to stay the same.

Artists, authors, rabbis and even comedians pump out new haggadahs, the books that guide the seder, every year.

This year, Passover’s Exodus story feels as urgent as ever, as multiple global conflicts — the Taliban takeover of Afghanistan and the Russian invasion of Ukraine — have triggered massive refugee crises. The latter crisis has involved thousands of Jews who are seeking shelter in Eastern Europe, Israel and beyond.

Here are some fresh new options for 2022 — some aimed at addressing the moment, others focused on fun distraction.

For those looking to engage with the contemporary global Exodus

HIAS, the nearly-150-year-old global Jewish refugee aid organization is busy these days: more people are displaced around the world than at any other time in recorded history.

The group’s free and downloadable 2022 haggadah includes first-person stories from refugees and updated facts and figures about modern crises. Topics like violence, poverty, food insecurity and the lack of access to education that refugees face are all brought front and center. There is also a new insert for children that asks them to put objects onto the plate representing their own families’ migration stories.

“As we consider our own history of escaping violence and persecution at the hands of a merciless tyrant, we also reach forward to those still in need of protection,” the haggadah reads.

For the Israeli history buff

Modeled after the American group with the same name, The Israeli Black Panthers were Middle Eastern and African immigrant activists who banded together to bring attention to their dire economic and social situations in Israel in the 1970s.

Written in a tin shack in Jerusalem on a stolen typewriter, “The Israeli Black Panthers Haggadah” was first written in 1971. A year later, a fire destroyed most of the Panthers’ archives, including their copies of the haggadah. It was thought lost for over 40 years, until a rabbi who collected haggadahs acknowledged he had a copy.

This completely bilingual (Hebrew-English) haggadah, which is being published in English for the first time, includes an introduction from Reuven Abergel, one of the movement’s founders, and other essays that reflect on the Panthers’ struggle and how it connects to the Passover story. It also includes powerful archival images of the Panthers engaged in activism.

Those who enjoy “Curb Your Enthusiasm” and its hysterical cast of characters will love this eponymous haggadah by Dave Cowen, a comedy writer and the author of a previous “Seinfeld”-themed haggadah.

The “Curb Your Haggadah” invites seder guests to essentially treat the meal as one big episode of Larry David’s HBO sitcom, and to divide the roles from the cast list amongst guests.

Larry David: “Jeff, are you hametzing serious with this hametz?”

Jeff Greene: “Yes. I am. And we are. And could you please stop using that bad language?”

Jeff Greene: “At least not for Passover.”

For the English major

Martin Bodek is another veteran comedy haggadah writer, having published past versions such as “The Emoji Haggadah,” “The Festivus Haggadah” and “The Coronavirus Haggadah.” Now he has turned his focus to another popular topic: William Shakespeare.

Bodek’s “The Shakespeare Haggadah: Elevate Your Seder with the Bard of Avon” pairs a Hebrew version of the haggadah with a parodic Shakespeare-ian “translation” of sorts on every page.

In his words: “Thou canst useth this as an actual Haggadah too, as the full Hebrew text be on the left, and Shakespeare’s rendering be on the right. So it readeth right, which sounds like it should beest the opposite, but it be not as confusing as thou mayest thinketh.”

For the feminist seder

Similar to her other widely acclaimed previous prayer poetry books and liturgical works, such as “The Book of Blessings” and “The Days Between,” Marcia Falk’s “Night of Beginnings” haggadah tones down the Exodus story’s patriarchal imagery, highlighting the actions of the story’s female characters, like Miriam and the midwives.

Falk’s haggadah also features the author’s own watercolor drawings and poems, alongside Jewish psalms and songs and questions that invite personal reflection and discussion.

For the New Yorker

It’s a mouthful for a name, but a bit of wordplay most New Yorkers will appreciate. Danielle Brody’s haggadah, which she also playfully illustrated, “puts an entertaining spin on the thousand-year-old tale,” her press release reads. “Examples include: a quarantined Afikomen, Moses sailing down the East River on the ferry, and plagues like [COVID] variants and social media outages.”

Brody originally published her haggadah last year but updated it this year with new content and even an original song.

For those supporting a loved one in recovery

For many, Passover is a joyous holiday filled with family, friends and good food. However, for those in recovery from substance abuse, being surrounded by alcohol can be a trigger.

Rabbi Shais Taub, a member of the Hasidic Chabad-Lubavitch movement, is a believer in the Alcoholics Anonymous 12-step program — which some argue has quasi-Christian influences — and runs a support group for addicts.

“When I meet a Jewish person who is in active addiction, I do not offer them to go synagogue and pray. The first place I’m going to send them is to the appropriate 12-step group,” Taub told NPR in 2009.

His “The Four Cups – A Recovery Haggadah” includes practical tips for conducting a Seder for those in recovery and their supportive loved ones.

Honorable mention: For curious kids (and their grownups)

Our sister site Kveller’s haggadah isn’t new — it was first published in March 2020 — but it still deserves a spot on any haggadah list, especially for families with young children. It makes the seder more digestible for kids, and it also features insights from renowned researchers who explain the connections between memory and food.

For more haggadah options, check out these from last year.