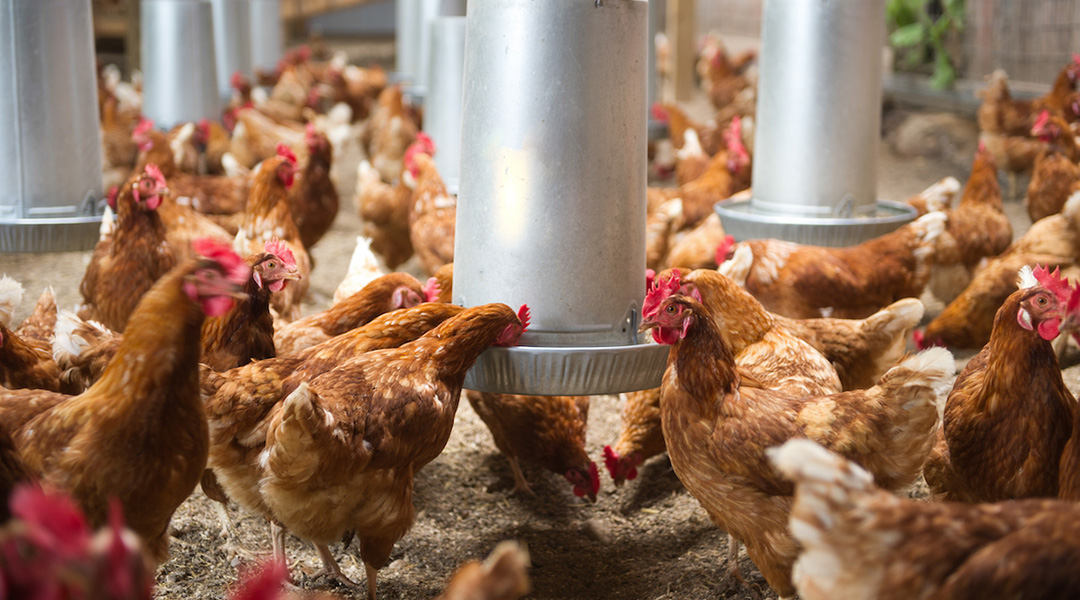 (JTA) — The reports are coming fast and furious from the Costcos, butcheries and grocery stores of America: Kosher chicken is hard to come by.

Facebook groups offer alerts when shelves are restocked. Some stores are limiting purchases; in others, customers are policing each others’ carts, looking for excessive stockpiling that could shut themselves and others out.

While anyone who wants kosher chicken at their Passover seder should be able to get it, doing so might require more effort, cost or compromise than usual. That’s because an unusual array of forces have conspired to depress chicken production in the United States, and kosher plants have suffered alongside everyone else.

Here’s what you need to know about the kosher chicken shortage that has many American Jews talking.

Is there really less kosher chicken available now than usual?

Yes. Many pressures on the chicken supply have contributed to less-than-average availability to farms, businesses and the average consumer. These pressures apply to non-kosher chicken, too, but because there’s so much more of that, produced over a wider number of facilities, the effects have been blunter.

Overall, there’s definitely less kosher chicken available right now than in past years — but still enough that everyone should be able to have what they want, perhaps not at the price or on the timeline they’d prefer.

What’s behind the shortage?

Today’s chicken supply has its roots in what happened in March 2020 — and new problems have emerged more recently.

A shortage of animals that set in early on during the COVID-19 pandemic, when abrupt factory closures caused chickens and eggs to be destroyed without being turned into meat, resolved itself by about September 2020, Yehudah Fink, director of administration at David Elliot Poultry, recalled last year.

But by then, the so-called Great Resignation was already in full swing, with many employers experiencing unfilled or partially filled positions. Even as Fink and others raised wages, they could not operate their plants at full capacity.

Fink planned to automate more of his factories by this Passover to reduce the need for workers, but he said that wouldn’t make up for the labor shortfall. And then came the avian flu.

The worst outbreak of avian flu since 2015 has decimated the non-kosher chicken market, mainly in the Midwest and on the East Coast. (At this time, the Centers for Disease Control says any possible risk to humans is very low.) When a bird flu outbreak occurs, any live birds that might be affected are condemned. The USDA has reported 22 million since February, according to Reuters.

Even though the kosher poultry farms have so far managed to avoid the outbreak for the most part, they are still affected. In normal times, when a farm is short on live birds, they can purchase more from another hatchery. But that’s just not an option right now, because of security measures in place to contain the outbreak. 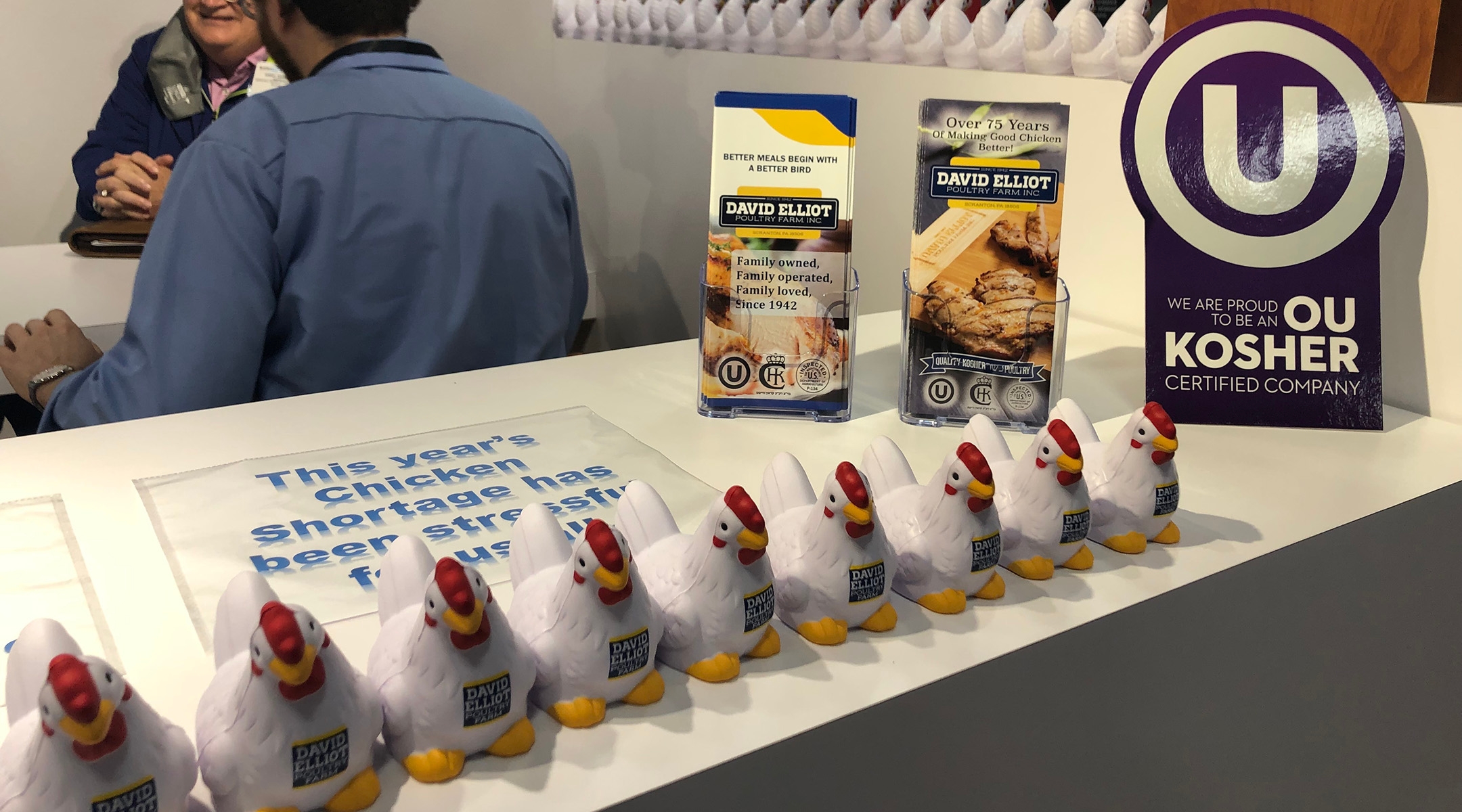 A sign at the David Elliot Poultry stall at KosherFest 2021 reads: “This year’s chicken shortage has been stressful for us all.” (Courtesy of Philissa Cramer)

“These plans also include how to keep farms isolated from each other, further restricting our options for additional live birds over the coming months,” Fink said this week.

“We’ve been calling around to other hatcheries to see if anybody else has extra birds,” Fink added. “But so is everybody else in this region.”

How is Passover affecting the kosher chicken supply?

Poultry consumption always increases during the Passover season, as people buy chicken for their seders and the duration of the holiday. Festive meals for observant Jews traditionally feature meat on the menu.

For the last two years, people have largely celebrated Passover in homes and in small groups because of the pandemic, meaning that few bulk buyers were influencing the marketplace. But this year, with public health restrictions largely lifted and travel on the rise again, Passover programs and communal seders are starting up again — and large purchases are being made in a market where live birds have been scarce for the last year and frozen meat for two years.

Kosher poultry farms generally freeze a few weeks’ worth of inventory over the course of the year in anticipation of the busy Passover season. But because of what happened last year, they couldn’t do that. So the programs have been buying fresh chicken instead, competing with consumers for the product.

The dynamics have producers like Fink having to make hard choices about who gets the meat they make.

“We’re coming in on a year now of being short product. And it is very hard on our end to figure out a fair allocation program,” Fink said. “People are scrambling for any product they can find.”

Chicken isn’t the only prominent-during-Passover ingredient facing shortages right now. The flu outbreak is also contributing to a reduction in the supply of eggs, crucial for Passover cooking. Passover’s overlap with Easter, the Christian holiday where eggs are a staple of decorating and activities, could make the egg shortage even more pressing.

Why didn’t more meat get produced for Passover?

Some foods are produced just for Passover, or in heightened quantities. But that’s easier said than done when it comes to meat.

In a typical year, David Elliot Farms can increase production for a holiday season — but only by up to 10%. And that’s with everything functioning as it normally does.

“This year, we have not been able to procure any extra birds and we haven’t had any inventory to speak of in storage,” Fink said.

“You can only produce so much extra chicken before Passover,” said Naftali Hanau, CEO of Grow and Behold Foods, a small kosher meat purveyor that ships food directly to consumers. “Inventory was already tight.”

Why am I seeing prices go up?

Consumers are experiencing sticker shock across industries at the moment, as pandemic-era supply and labor interruptions translate into higher costs at the cash register.

“This year in general there’s just a lot of inflationary pressure on everything,” Hanau said.

Labor costs have risen this year. So have gas prices and the cost of packaging materials needed to distribute meat. Now, the war in Ukraine is increasing the cost of chicken feed, too. Both Russia and Ukraine are significant producers of grain.

“Even if we weren’t buying direct from them for our contracts, somebody else was and now there’s not enough to go around,” said Fink. “The No. 1 biggest component of the price of chicken in the supermarket is really the feed.”

Then, of course, there’s the simple economics of it all: When supply is down and demand is up, goods can command a higher price. Prices always increase ahead of Passover, as demand for kosher chicken increases, according to multiple people with knowledge of the kosher food industry. (Before the pandemic, Fink said, kosher chicken prices were at historic lows.)

This year’s high prices have some buyers spooked, according to Alexander Rappaport, owner of Masbia soup kitchen and pantry in Brooklyn, who gets his chicken from KJ Poultry. 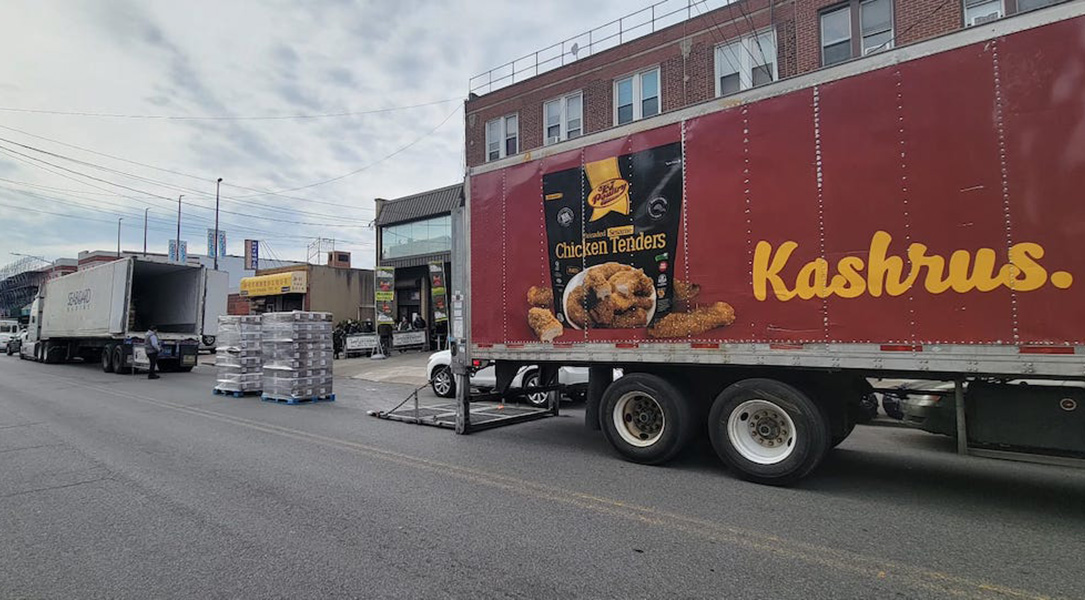 “Everybody in the supply chain is scared that they’ll stock up with the expensive, then they’ll stay stocked with expensive inventory and there’ll be cheaper inventory going around,” he said.

But the scarcity might also be leading to panic purchasing. People posting in the Facebook group Kosher Costco have reported seeing customers make multiple purchases to circumvent limits, or buy out a whole display case when there are no limits in place.

What’s the outlook for kosher-keeping Jews?

Prices are going up and customers can expect to see limited quantities or varieties of kosher chicken products in stores. It’s possible that a grocery store shelf will be empty one day but full the next.

For grocers and suppliers of poultry, Fink recommends ordering as often as possible — even if that means being disappointed sometimes.

“If you’re ordering every day, you’re much more likely to luck out that one of those days we’ve got the right product for you,” he said.

But the climate favors bigger buyers right now. “It’s the smaller caterers and the retail customers outside the New York area who are going to be more affected, if I had to guess,” Hanau said.

Consumers might do well to consider skipping chicken, whether for other meats or for none at all. Beef can be expensive, but it is available.

There are other ways to be inventive. When Super Bowl buying exhausted the supply of wings and legs, KJ Poultry instead offered Rappaport ground chicken made from carcasses that would otherwise go to waste. After experimenting with the product, his staff at Masbia created a few recipes for “falshe fish,” or mock gefilte fish made from chicken, using it.

Rappaport and others believe that Jews will continue to buy chicken, even as the cost goes up and if they have to wait, or fight, for it.

“Chicken is so essential,” Rappaport said. “You’ve got to have that piece of chicken to make a decent dinner.”

“Jews aren’t going to the theoreticals of less consumption,” Dina Tucker told JTA in November when she was working at a the KosherFest trade show as a sales rep for KJ Poultry. “I would give up spending somewhere else.”

Will the kosher chicken supply be restored by the fall, when Jews again plan festival meals for Rosh Hashanah?

“I can’t see it really getting better without something major changing before the end of the year,” Fink said. “Which means we’re going to have to go through another Yom Tov season like this.”