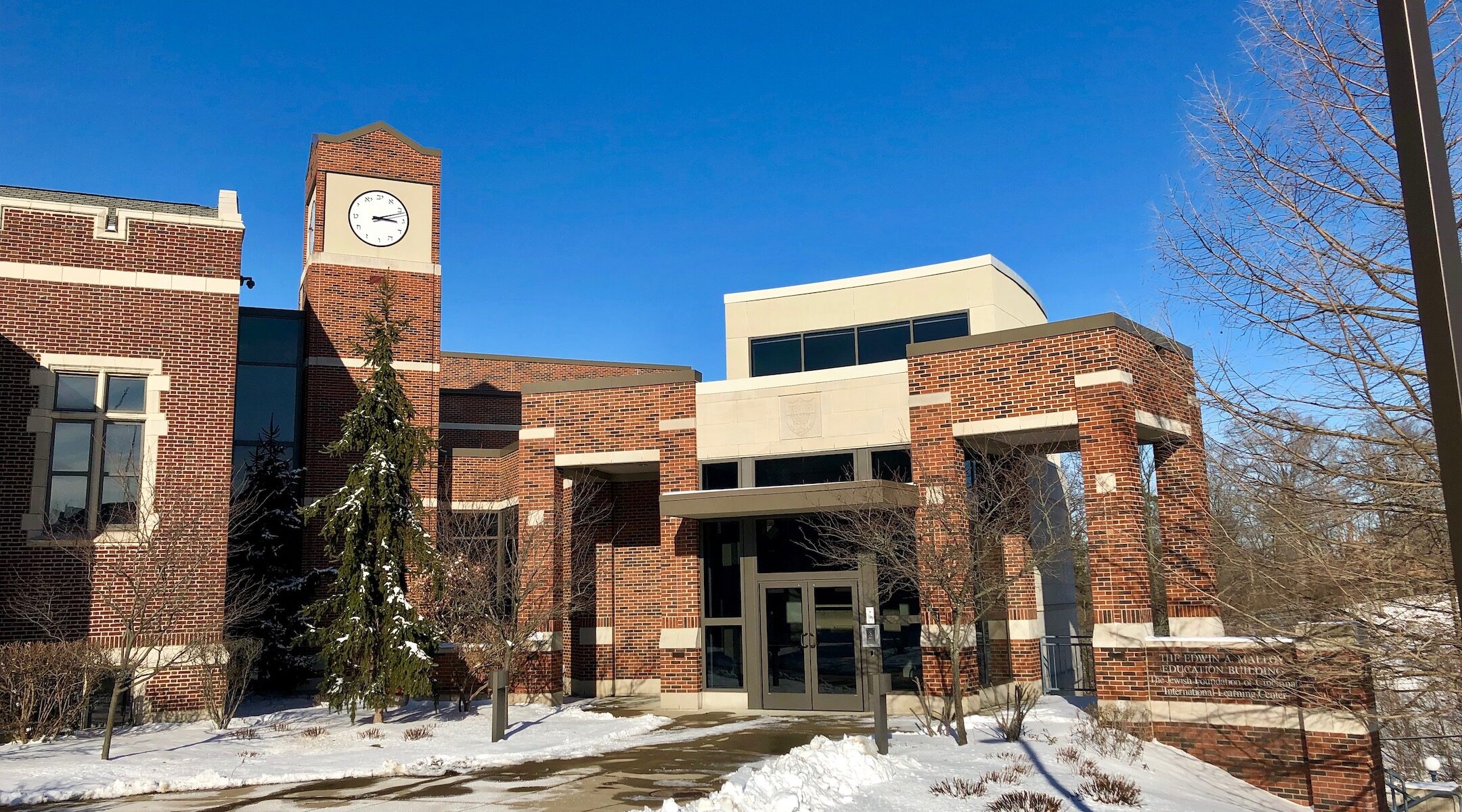 The Jacob Rader Marcus Center of the American Jewish Archives at Hebrew Union College in Cincinnati, Ohio, January 21, 2019. Under a new proposal, HUC is considering ending its rabbinical program in Cincinnati but maintaining the archives. (Warren LeMay via Creative Commons)
Advertisement

Not only was Cincinnati where he was ordained, but it was also where he met his wife, actress and singer Kelly McCormick — who converted to Judaism after spending time in the community’s Shabbat musical ensemble. Today, Blake leads Westchester Reform Temple in New York and is a regular voice on issues of modern Reform Jewish thought.

Yet Blake is supporting HUC’s plan to stop training rabbinical students full time in Cincinnati, even as many of his colleagues are organizing against the proposal. In advance of a board vote Monday, open letters are flying, congregations and their leaders are vowing to take action and a rally is being planned to protest the proposal. Ohio’s attorney general and one of its two senators have even expressed concerns.

“At the end of the day, what I care about most is providing the next generation of rabbis, cantors and Reform Jewish professionals with the best possible education,” Blake told the Jewish Telegraphic Agency.

Blake believes the plan, which has drawn criticism from large swaths of the Reform rabbinate including the majority of HUC’s Cincinnati faculty and staff, would help address the school’s debt problem, as well as update what he sees as an outdated model of operating across three different campuses. Along with other prominent rabbis including Angela Buchdahl of Central Synagogue in Manhattan and Rachel Timoner of Congregation Beth Elohim in Brooklyn, he has signed an open letter supporting the plan.

That letter, which had around 130 signatures as of Wednesday, was created in response to another open letter opposing the plan, which boasts more than 480 signatures — including from Charlie Cytron-Walker, the rabbi who was taken hostage in Texas earlier this year.

Blake is also going a step further. He is one of several rabbis pledging to increase their congregational dues to the Reform movement in the event that other congregations follow through on a threat to stop paying theirs if the plan goes through during an HUC board of governors meeting on Monday. More than 50 institutions made that threat in yet another letter that is circulating in advance of the vote.

It’s a question that has bedeviled HUC for decades amid sharply declining enrollment and revenue. Previous efforts to implement cost-saving measures by closing one or more of its campuses have failed to come up for a vote.

Now, the seminary’s leadership isn’t proposing closing the campus altogether. Instead, they are proposing that all HUC rabbinical students enroll in New York and Los Angeles, while Cincinnati will become a research center and, in the future, a hub for a low-residency rabbinic training program.

With downsizing at the 147-year-old school closer than ever to becoming a reality, the backlash has been fierce. Opponents to the plan are planning a “Rally for our Rabbis” Thursday evening at the Cincinnati campus.

The opposition has even included a threat of investigation from Ohio’s attorney general, Republican Dave Yost.

In a letter sent to top HUC administration this week and obtained by Cincinnati’s WCPO, Yost’s office suggested that HUC could be in violation of its 1950 merger agreement with the Jewish Institute of Religion in New York. In that agreement, HUC had assured donors that the combined institution would “permanently maintain rabbinical schools” in both cities.

The state’s Charitable Law Section chief Daniel Fausey wrote in the letter that the attorney general’s interest in the case was in “ensuring that charities honor the intent of benefactors and serve the interest of intended beneficiaries.”

The school has said that if the plan passes it will maintain its physical Cincinnati campus, including its library and archives, which are among the most robust held by American Jewish institutions.

“We are mindful of, and will comply with, our legal obligations, and we understand the Attorney General’s authority,” an HUC spokesperson told JTA in a statement, adding that school leaders “fully expect” they will be able to continue honoring the school’s obligations to students, alumni, faculty and donors.

The school’s statement further called for all parties to “continue to respect each other’s point of view as we move forward together.”

Requests for comment to Fausey by JTA were redirected to the Ohio AG’s press office, which did not respond to queries.

Legal experts JTA spoke with said that, while Ohio’s AG has broad authority in overseeing nonprofits in the state, and charities need to generally seek permission from the office if they plan to drastically change their mission statements, it was unlikely that HUC’s strategic plan would be a severe enough departure from its stated nonprofit mission to prompt legal intervention.

“I’m deeply skeptical, and I suspect that this [letter] is driven more by politics than law,” said Joseph Mead, a scholar of nonprofit law and former professor at Cleveland State University’s Cleveland-Marshall College of Law.

Yost, a Republican, is up for reelection this year.

Ohio Sen. Sherrod Brown, a Democrat who is not Jewish, has also come out against the plan.

“It would be a huge loss to the city’s Jewish community and to the region overall” for the plan to advance, he told WCPO. He said his office “stands ready to assist in any efforts to help HUC in any way that I can.”

In addition to the legal and personal threats, a financial one also looms in the letter threatening to withhold congregational dues to the Union for Reform Judaism, the movement’s governing body, should the plan go through.

Congregations pay dues to URJ via its Reform Judaism Affiliation Commitment to remain in good standing with the movement; those funds, in turn, help support HUC. A sharp decline in dues revenue over the last 15 years, from $15 million to $5.4 million annually, was one of the reasons cited in the HUC strategic plan for the need to close Cincinnati’s rabbinical program.

“If the Board of Governors votes to close Cincinnati, we will have no choice but to seriously rethink our relationship with the URJ,” states the letter addressed to URJ President Rabbi Rick Jacobs, who is also a voting HUC board member.

The letter, which JTA obtained and has not been made public, adds that the signatories would “reassess how we allocate our budgetary priorities” to the URJ should the plan pass, citing the movement cutbacks in youth programming in recent years as evidence of a “potential abandonment of our geographic region.” It calls on Jacobs to either vote against the plan or abstain from voting at all.

Representatives from more than 50 different organizations had signed the letter as of Wednesday, including large congregations such as Temple Israel in Dayton, Ohio; Temple Emanuel in Denver; and Reform Congregation Keneseth Israel in Elkins Park, Pennsylvania (which, in a potentially awkward twist, is hosting a Shabbat dinner with Jacobs this week.)

Although rabbis on their own typically don’t dictate their congregations’ spending, several signatories included the congregation presidents and counsels as well as the rabbis, signaling greater intent as an organization to withhold dues.

Not all signatories represent Reform congregations, and it’s unclear if all of them currently pay dues to the Reform movement. Other groups represented included the Academy for Jewish Religion-California, a transdenominational seminary that HUC cited in its strategic plan as a competitor; and a church pastor who earned a doctorate at HUC-Cincinnati.

At the same time, there is also a vocal presence of HUC alumni and current students who support the plan, or at least its broad strokes.

“Transformative changes to our school are the only reasonable response to a rapidly evolving North American Jewish community, and we feel that this plan provides an essential baseline for what comes next at HUC-JIR,” reads the open letter supporting the proposal.

The pro-plan letter also communicates confidence in the school’s leadership. And in a nod to how vicious the fight has become, the letter also condemns “unwarranted personal attacks” and “smears against key figures in the administration.”

New York and California-based clergy are most heavily represented among the pro-plan signatories. But some of the plan’s supporters also hail from the middle of the country, representing congregations in Ohio, Michigan, Missouri, Arkansas, Texas, Nebraska, Kansas and other states in the Midwest and the South — regions that critics of HUC’s proposal say be will be abandoned if Cincinnati no longer has a rabbinical school.

Opponents to the plan have levied personal attacks, publicly questioning the leadership capabilities of HUC’s president, Andrew Rehfeld, and other top administrators. Some HUC faculty have circulated a document highlighting reasons they believe Rehfeld is unfit to be their president, and one professor delivered a speech inveighing against the plan in full view of Rehfeld. 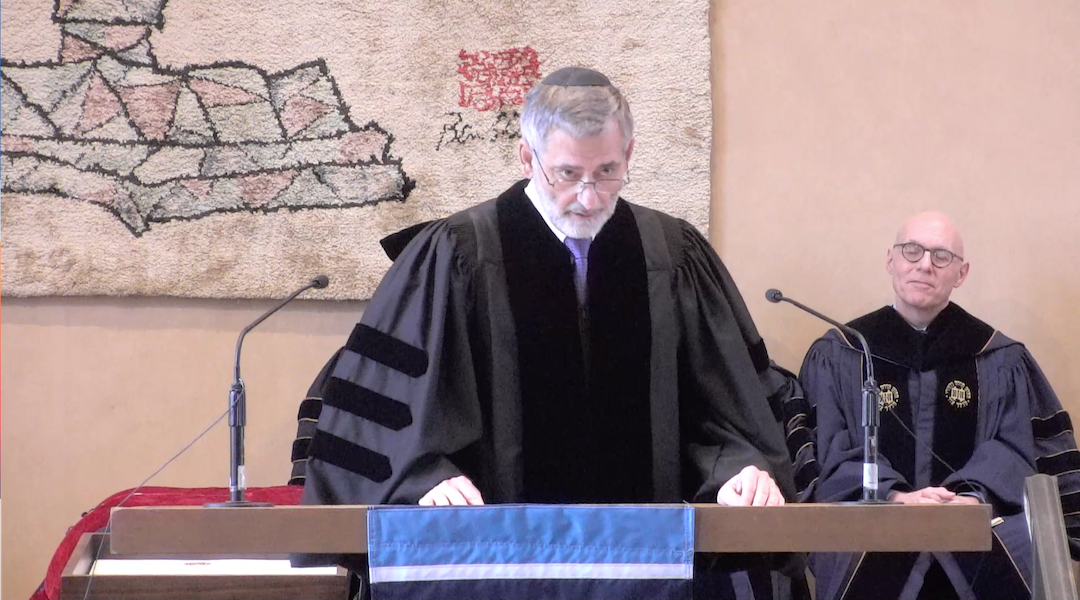 In response to threats from other rabbis about potentially withholding dues to the movement, some rabbis have signed the open letter meant to assure the HUC board that their congregations would stand by to help make up any loss in dues resulting from protests around the plan vote. JTA has reviewed the text of the letter, which was authored primarily by Rabbi Yoshi Zweiback of Stephen Wise Temple in Los Angeles and has not been made public.

“We have decided to increase our support of the College-Institute both personally and from our communities as a result of the changes that you are making to ensure its long-term sustainability,” the letter reads in part. “We are ready to step up to help raise funds to replace what may be lost during this process, as well as to partner with you to build toward a stronger future.”

Zweiback told JTA that more than 60 rabbis from across the United States had signed, though he declined to share the list of signatories. He said the letter was intended “to ensure the vitality and sustainability of the College-Institute.”

At stake in this fight, both sides feel, is not just the future of HUC but the soul of the American Reform movement. One side would see the plan’s approval as a sign of the movement abandoning its Midwest roots and commitment to serving a broad geographic diversity of Jews. The other would see the plan’s rejection as a sign the movement is unwilling to listen to its younger leaders, who have been increasingly opting not to enroll at Cincinnati for several years, and as a denial of the realities of dwindling revenue and resources.

Two different senior rabbis in the Cleveland suburb of Beachwood serve as an example of how divided this issue has become. Rabbi Jonathan Cohen, who was dean of HUC’s Cincinnati campus from 2011 to 2018 and is currently senior rabbi at The Temple Tifereth Israel, opposes the plan so much that he made public a letter he had written to HUC’s board chair in February advising the school against implementing it.

On the other hand, Rabbi Robert Nosanchuk at the nearby Anshe Chesed Fairmount Temple told the Cleveland Jewish News he supports the plan.

“I think Jewish institutions have to consider and reconsider how to deliver on their mission in ways that don’t always correspond to the way they have done so historically,” he told the newspaper.

Enrollment at the Cincinnati campus has declined so much that, Nosanchuk said, he has been unable in recent years to hire student rabbis from the campus in his own state.

He wound up hiring students from the New York campus instead.