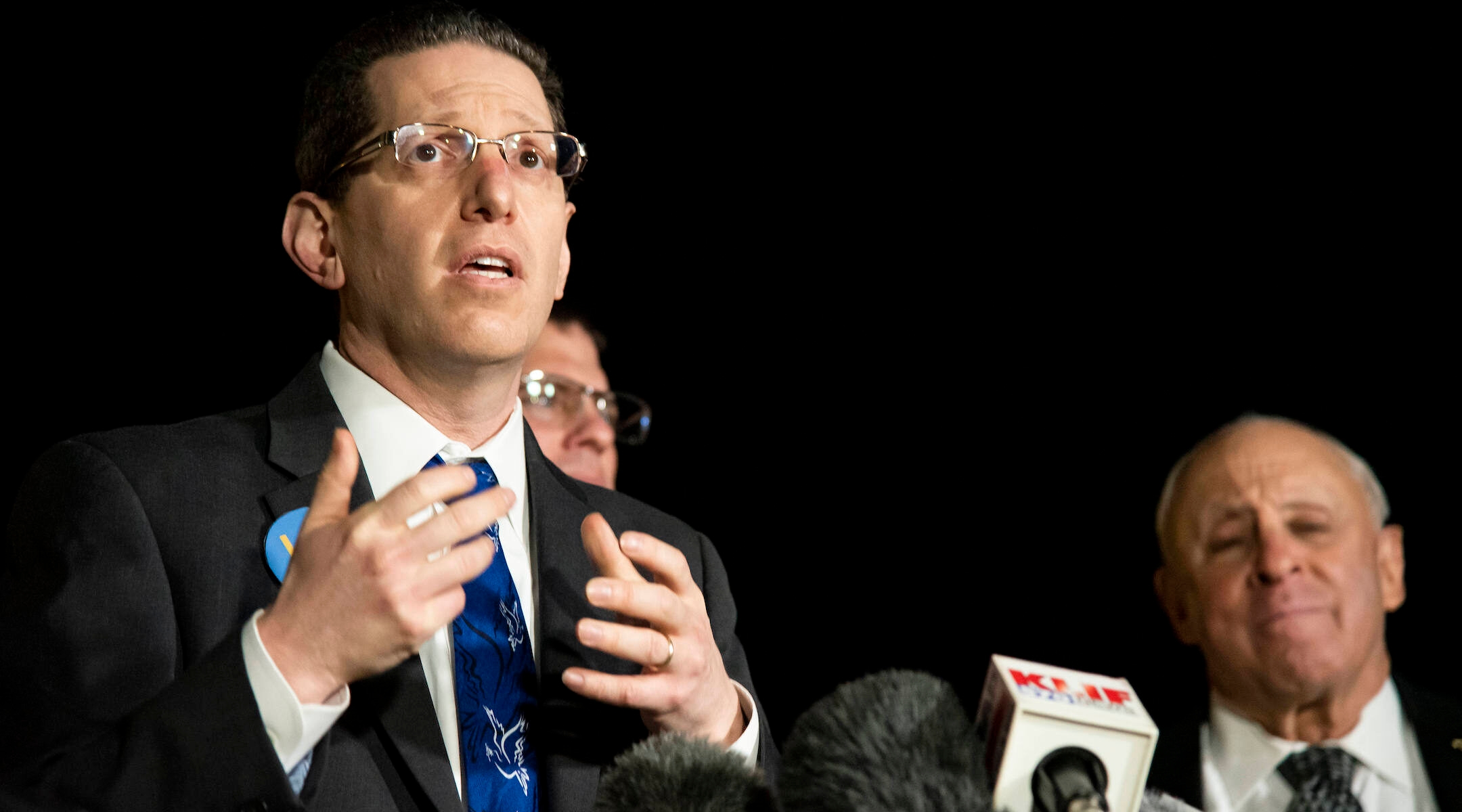 Rabbi Charlie Cytron-Walker talks to reporters outside of Whites Chapel United Methodist Church following a special service on January 17, 2022 in Southlake, Texas. The service was arranged after a 44-year-old British national over the weekend stormed into the Congregation Beth Israel synagogue in Colleyville with a gun and held four people hostage for more than 10 hours. (Emil Lippe/Getty Images)
Advertisement

(JTA) — Rabbi Charlie Cytron-Walker, the man at the center of the Colleyville, Texas, synagogue hostage crisis last weekend, says that he is looking for another job, but wants the world’s focus to remain on his congregation’s trauma and healing process rather than his career.

Cytron-Walker was responding to an article published earlier Wednesday in the Forward reporting that the rabbi had resigned from his congregation last fall, possibly amid discord about whether he should remain.

The synagogue is advertising for a new rabbi on the Reform movement’s jobs board, its search committee met twice this month and Cytron-Walker made an oblique joke about the situation from the stage of a healing service held Monday night.

“I am looking for another opportunity after dedicating over 15 years of my life to a congregation,” Cytron-Walker told JTA, adding that he is leaving with many positive feelings about the only pulpit he has held since graduating from rabbinical school. “I love the congregation. I love the people. I love the community.”

Cytron-Walker said he also wants Jews to know that despite what happened to him, he would stress to Jews everywhere that “it’s safe to go to shul” — and that synagogues should continue to make themselves sanctuaries for all.

Cytron-Walker’s 12-hour ordeal with an antisemitic gunman on Saturday, which ended with him throwing a chair at the hostage-taker to allow himself and two congregants to escape safely, drew international attention to his congregation, as well as to himself. The rabbi said that it’s been “incredibly overwhelming to see the level of support that we have received from our local community, our national community and the global community. I can’t tell you how much it means to me and the congregation.”

At the same time, he added, Beth Israel is still struggling to figure out how to heal.

“We’re really trying to figure out what we need to do,” he said. “We’ve got repairs to make to the congregation and we’re making arrangements so that we can have services this weekend.” He’s also encouraging his congregants to seek out therapy if they need it.

The newfound scrutiny on the congregation has come with some discord, including a man identifying himself as a former congregant who criticized the rabbi on social media for, he claimed, forbidding congregants to carry guns inside the building and for calling Israel “an apartheid state.” Both claims, Cytron-Walker said, were untrue.

Though Beth Israel requests that visitors to its synagogue not carry firearms openly, he said, concealed carry — hiding a firearm on one’s person in a public setting with the proper license — is permitted.

“And I would have hoped that one of the people in the synagogue that morning, one of the members from the synagogue, had had a gun on them to have ended things a little bit earlier,” he said. (Texas is an open-carry state, but “we don’t feel that open carry should be a part of a synagogue service,” the rabbi said.)

And, Cytron-Walker said, he does not believe Israel is an apartheid state. “When I teach about Israel, I teach about how Israel is complicated. I’m a huge supporter of Israel,” he said, noting that the synagogue’s education program works with the Ofek Learning Hub to have Israeli teachers leading online learning for youth programs, and that “we sing ‘Hatikvah’ [the Israeli national anthem] at the end of every religious school.”

The hostage crisis has caused many Jews the world over to once again have heightened concerns for synagogue security, as congregation leadership weighs how to balance personal safety with the Jewish commandment to “welcome the stranger.”

“It’s such a random occurrence, and the percentages are so low” of an antisemitic incident occuring at services, he said. 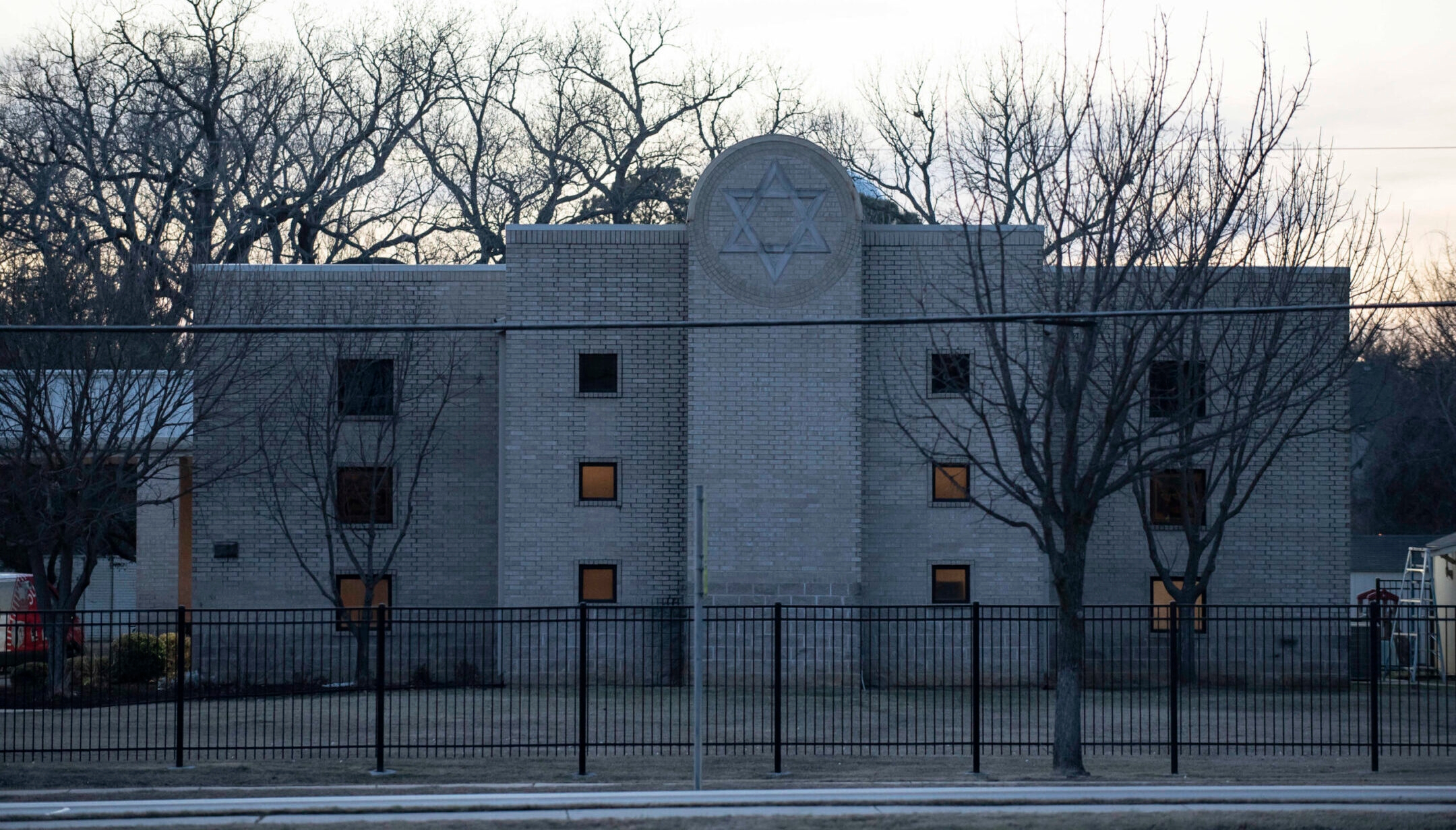 “I have literally led thousands and thousands of services at Congregation Beth Israel, and this was the first time we had such a traumatic incident,” Cytron-Walker said.

Smaller congregations such as Beth Israel, he noted, don’t have the means to hire security officers for every service, particularly when, as in Saturday’s Shabbat morning service, they attract so few people. Only four people were in the building Saturday morning when the attack began.

Cytron-Walker instead encouraged synagogue leaders and congregants alike to undergo security training akin to drills he had run with the Anti-Defamation League and Secure Community Network in recent months — exercises that he has credited with saving his life.

Doing that training, Cytron-Walker said, helped him assess the risks of Saturday’s situation even as he was able to attend to what he initially thought was an innocuous visitor.

“While I was providing hospitality, I was also analyzing the situation,” he said, while acknowledging that he had been thrown off initially because the assailant’s behavior at first didn’t match the training. “This guy didn’t exhibit the nervousness, the looking in all different directions. He looked me in the eye. … I didn’t see any of the things that indicated falseness in that initial encounter.”

What congregations cannot do, the rabbi emphasized, is cease welcoming the stranger.

“I’ve welcomed people into the congregation that don’t look like your stereotypical visitor to a Jewish synagogue, over and over and over again,” he said. “And people are looking to pray. People are looking for community. And they’re asking the question, ‘Do I belong?’ And we need to stress to them, and the whole community has to be able to stress to them, that yes — you belong.”

One of the most visible ways the congregation has worked to heal itself was with a special service Monday evening, at which Cytron-Walker stood on the bimah next to synagogue leaders and preached directly to his congregation, as well as the broader community — a show of unity, healing and love, regardless of any internal strife.

Cytron-Walker said the service “was really valuable for me, to be able to stand and see so many — not just my congregation, but also so many other people in the community that I care about, that I love.”

Asked whether the events of the past week have changed the dynamics of the congregation at all, the rabbi said, “That sense of unity, it usually lasts for a little while. But let’s be realistic, right?”

He added, “We need to be able to know that ‘kol arevim zeh bazeh,’ that each of us are responsible for one another. And if we can live that value, beyond any other disagreements that we may be experiencing, then, I mean, that’s the space that we need to live in. That’s the value that we need to live.”