A police vehicle sits outside of the Congregation Beth Israel Synagogue in Colleyville, Texas, some 25 miles west of Dallas, Jan. 16, 2022. (Andy Jacobsohn/AFP via Getty Images)
Advertisement

(JTA) — Rabbi Charlie Cytron-Walker has publicly described for the first time the moment he and two other hostages escaped a gunman in his synagogue in Colleyville, Texas, on Saturday

“The last hour or so of the standoff, he wasn’t getting what he wanted,” Cytron-Walker told CBS in an interview posted on Monday morning. “It didn’t look good. It didn’t sound good. We were very, we were terrified.

“And when I saw an opportunity where he wasn’t in a good position, I made sure that the two gentlemen who were still with me that they were ready to go. The exit wasn’t too far away. I told them to go, I threw a chair at the gunman and I headed for the door. And all three of us were able to get out without even a shot being fired.”

The 11-hour standoff at Congregation Beth Israel in the Fort Worth suburb Saturday ended when an FBI SWAT team raided the synagogue after the rabbi and two other hostages fled. The gunman, Malik Faisal Akram, a British citizen, died in the raid.

In the interview, Cytron-Walker detailed what happened when Akram arrived at the synagogue. The rabbi said he allowed Akram entrance and made him tea, speaking with him extensively. Some elements of Akram’s story didn’t add up, Cytron-Walker said, but he didn’t realize the danger until he was standing on the bimah facing away from his congregants when he heard the click of a gun.

Cytron-Walker credited the security training he has received, including from Jewish community security consultants, for helping him to manage the crisis from that point until late that night, when he and two other men who were still being held ran from the building. 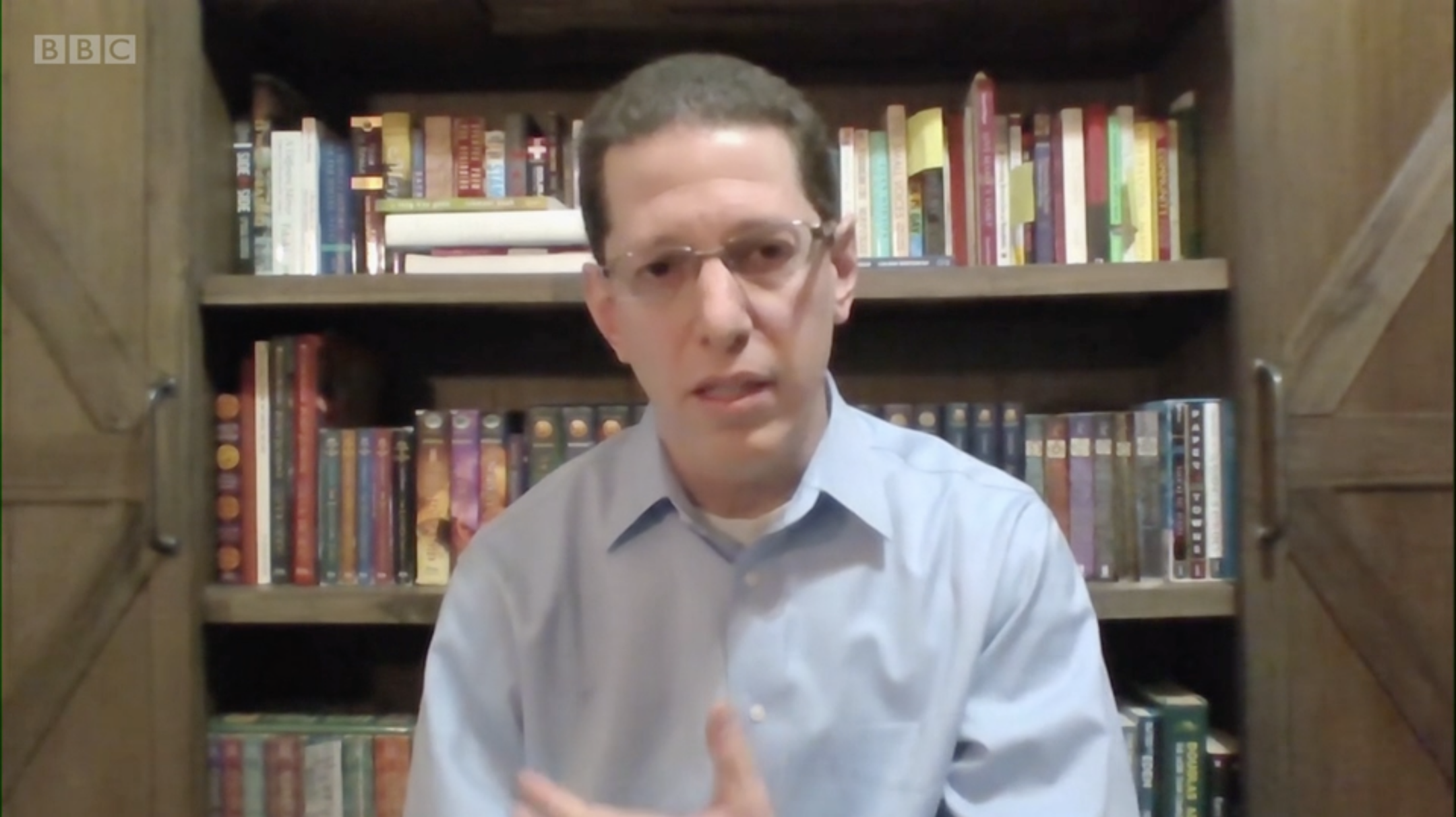 Rabbi Charlie Cytron-Walker spoke to CBS Monday morning, 36 hours after he and two other hostages escaped from a gunman at Congregation Beth Israel in Colleyville, Texas. (Screenshot)

“For the past few years, we’ve had training — it’s not training it’s I guess, courses, instruction — with the FBI, with the Colleyville Police Department, with the Anti-Defamation League, with Secure Community Network, and they really teach you in those moments that if you’re when your life is threatened, you need to do whatever you can,” he said. “To get to safety you need to do whatever you can to get out.”

Cytron-Walker also thanked the same agencies in a separate statement released through a spokeswoman. “Without the instruction we received, we would not have been prepared to act and flee when the situation presented itself,” he said.

Cytron-Walker did not elaborate on what training kicked in, but accounts showed that he engaged Akram and kept him calm. Cytron-Walker made clear to Akram that he trusted him, according to audio that was streamed from the synagogue in the first hours of the crisis.

During an exchange with a hostage negotiator, Akram said, “Rabbi, I need you to tell him that you trust me that I will let you out. You’ve got to take my word for it.”

Cytron-Walker weighed in. “We do trust that. Again, I want to acknowledge, my word doesn’t mean much in this situation, but I do believe that he would let us out.”

In the interview with CBS, Cytron-Walker said his rabbinical training kept him cool.

“As a part of rabbinic training, as a part of training as clergy we talk a lot about the idea of being a calm, non-anxious presence, we do that  in hospital rooms, we do that during the most difficult individual moments,” Cytron-Walker said. “I did the best that I could to do that throughout the standoff.”

“The rabbi and other individuals conducted themselves with a degree of calm and courageousness that was truly remarkable under the circumstances,” Masters said in an interview. “The offender indicated multiple times that he didn’t want to hurt the Rabbi, he referenced him by name, referenced at least one of the other hostages by name.” 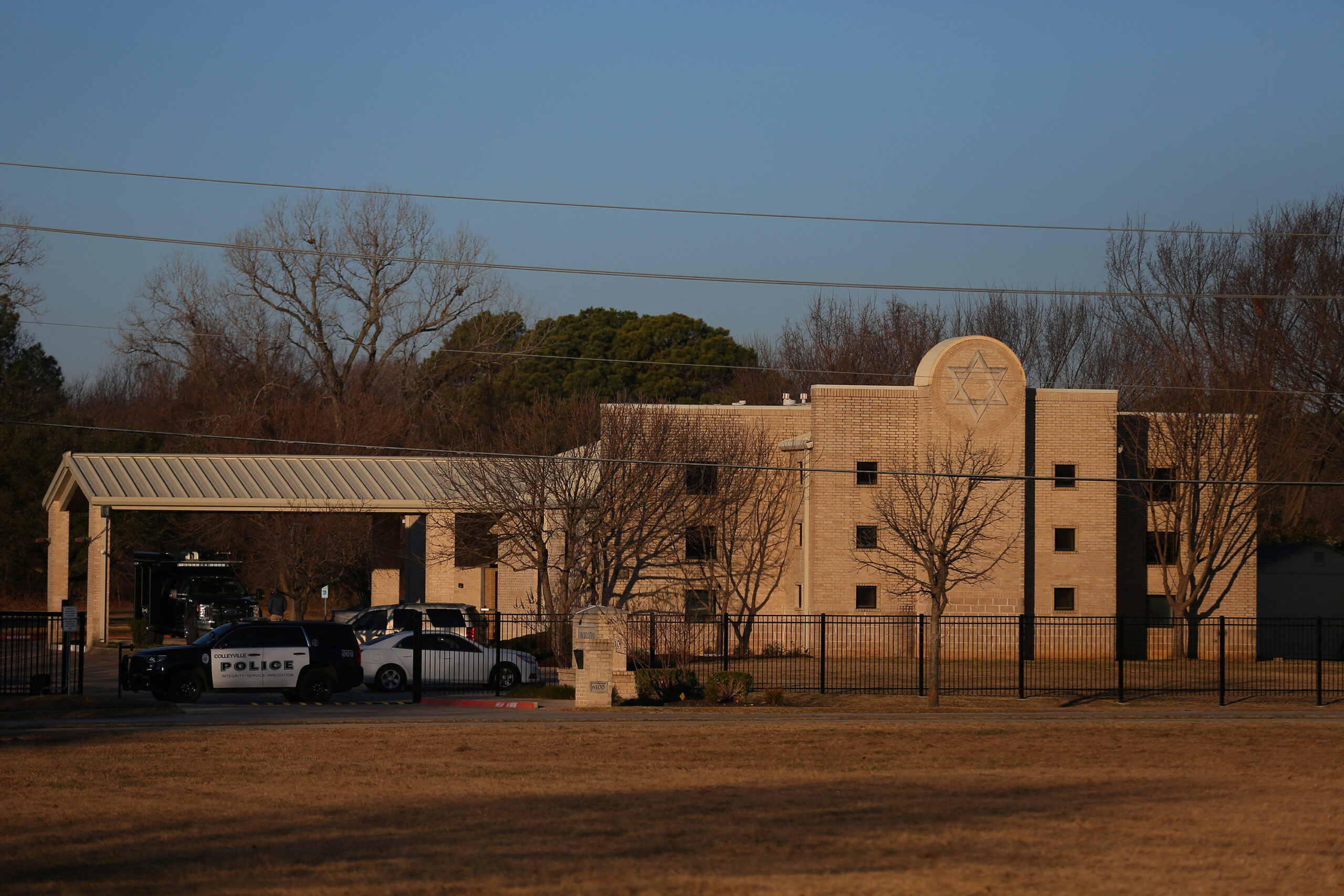 Above all, Masters said, the critical step is to recognize the risk Jewish institutions now face and to “commit to action,” to train for security.

Evan Bernstein, the CEO of the Community Security Service, which trains Jewish security volunteers, said it was critical that Jewish institutional security not fall off the radar after the headlines fade. Akram chose Beth Israel, reportedly, because it was close to the prison complex where a terrorist he wanted freed is being held.

“We talk to our volunteers and I get asked when’s the higher alert or lower alert, it’s always an alert because you don’t know when a random activity is going to take place,” he said in an interview. “If you look at the acts of hate that have taken place, many of them are lone wolves  that law enforcement would never be able to track. We can’t say,’ ‘Well, this is only going to be a major metropolitan problem or it’s going to be a smaller-city problem or a rural synagogue problem. It’s a problem for the community.'”

The Jewish Federations of North America in October announced plans for a program to bring security infrastructure to every community in the country, as opposed just those that can afford it. In the wake of the Colleyville attack, JFNA said it was accelerating the program, which it calls LiveSecure. The program launch was moved to next month from later this year, a release said.

Akram was seeking the release of Aafia Siddiqui, a Pakistani Muslim woman serving 86 years for attempting to kill U.S. security officials in 2008. He also made clear during the hostage crisis that he was singling out a Jewish target because he bought into antisemitic theories, according to a congregant who was listening to a livestream before the situation broke into public view. Siddiqui during and after her trial also peddled antisemitic invective.

His family said in a statement that Akram was mentally ill and was determined to die.

Akram was from Blackburn, in England’s northwest. On Sunday, police in Manchester, south of Blackburn, said they had detained two teenagers in South Manchester for questioning in relation to the Texas synagogue case. The tweet from Greater Manchester Police did not add further information.