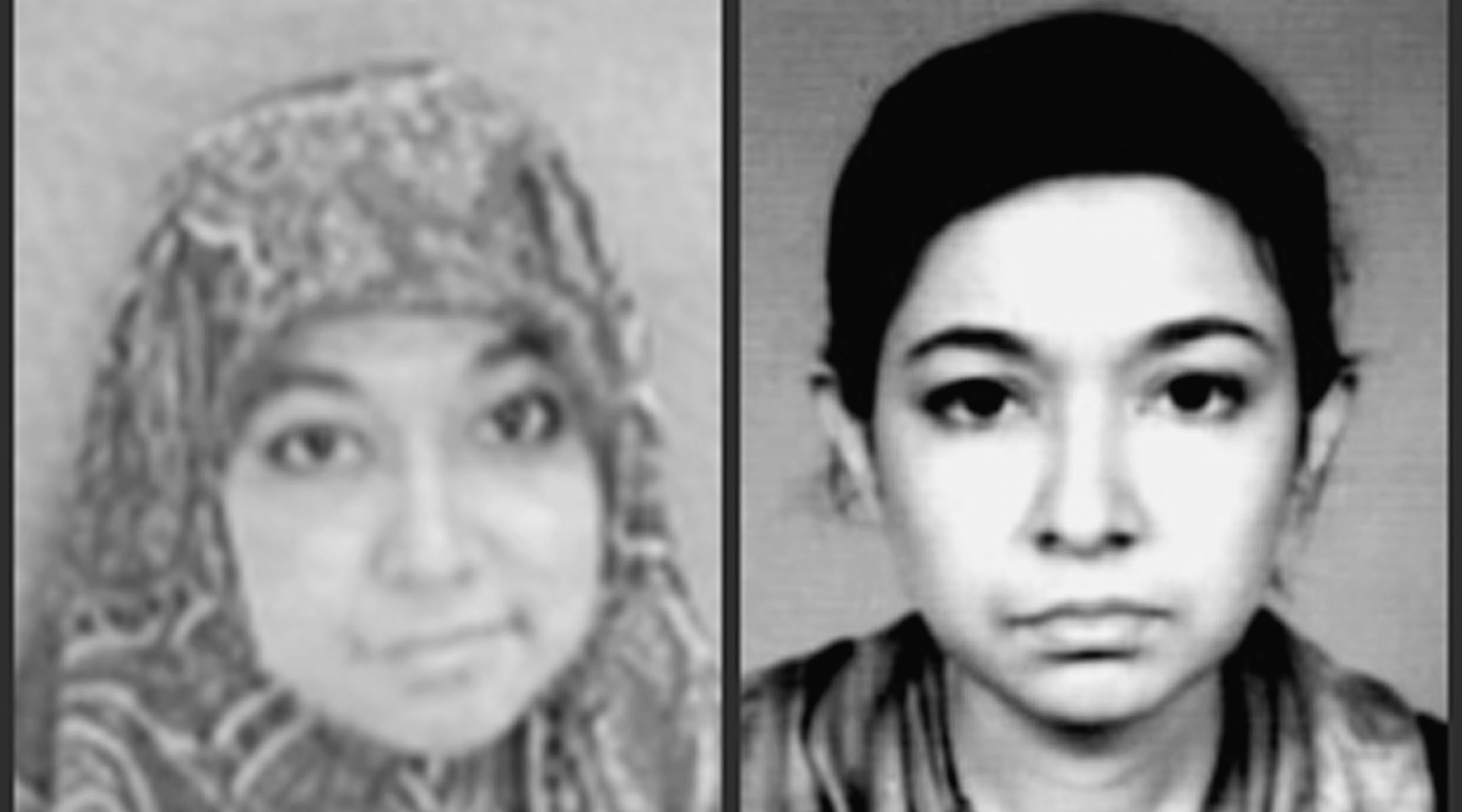 (JTA) – The name Aafia Siddiqui became familiar to many on Saturday, when a man took a rabbi and his congregants hostage in a synagogue in Colleyville near Fort Worth, Texas.

That’s because the hostage-taker was reportedly demanding the release of Siddiqui from prison.

After Sept. 11, 2001, Siddiqui — a neuroscientist with a doctorate from Brandeis University — became the first woman accused of working with al-Qaeda leadership and was dubbed “Lady al-Qaeda” in the press. She has family ties to Khalid Sheikh Muhammad, the chief architect of the terrorist attacks on New York and Washington, D.C. In 2010, she was convicted of attempting to kill American military personnel in Afghanistan while being detained in 2008 on suspicion of plotting attacks in New York.

Ahead of her trial, Siddiqui demanded that the court exclude Jews from the jury and said she wanted the jurors to undergo genetic testing.

“If they have a Zionist or Israeli background . . . they are all mad at me,” Siddiqui told the judge. “I have a feeling everyone here is them [sic] — subject to genetic testing. They should be excluded if you want to be fair,” she said.

Siddiqui is serving an 86-year sentence at Federal Medical Center-Carswell prison in Fort Worth, where she was transferred in 2008. It is the only federal medical facility for women in the United States.

Siddiqui has the support of family and an international network of activists who say she is innocent and are demanding her release. In 2016, supporters gathered in a demonstration outside the federal courthouse in Fort Worth to demand her release. Last September, a Pakistani government official called on the United States to let her out. 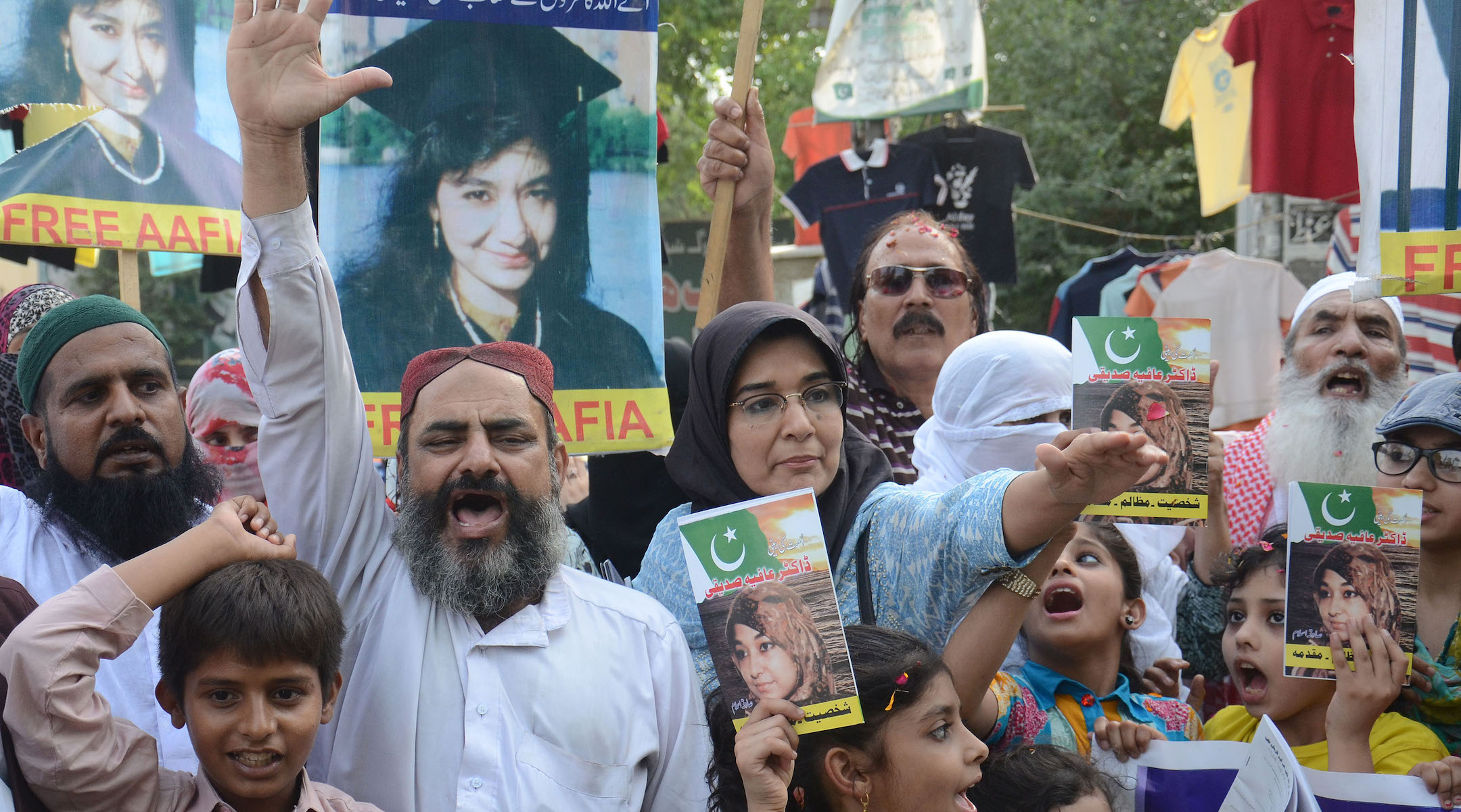 Demonstrators demand the release of Free Aafia Siddiqui from U.S. custody in Lahore, Pakistan on May 29, 2016. (Rana Sajid Hussain/Pacific Press/LightRocket via Getty Images)

In August, the Fort Worth chapter of CAIR, the Council on American-Islamic Relations, reported that Siddiqui told her lawyer she had been attacked in her cell by a woman who smashed a mug containing hot liquid in Siddiqui’s face. The chapter’s executive director Faizan Syed told the Fort Worth Star-Telegram that he believed Siddiqui was an innocent victim of rising Islamophobia in the post 9/11 era.

“She does not want any violence perpetrated against any human being, especially in her name,” Elbially was quoted as saying. “It obviously has nothing to do with Dr. Siddiqui or her family.”

Born in Karachi, Pakistan, in 1972, Siddiqui is a neuroscientist who earned a bachelor’s degree from the Massachusetts Institute of Technology and a Ph.D. from Brandeis. She returned to Pakistan in 2002.

Back in her home country, many consider Siddiqui a scapegoat in the United States’ military response to the 9/11 attacks. Pakistan’s Senate declared her “the Daughter of the Nation” and called on the Pakistani government to act to repatriate Siddiqui in a unanimous resolution in 2018.

The U.S. government has the opposite view. Considering her a dangerous terrorism threat, U.S. officials once called Siddiqui “the most wanted woman in the world.” Proposals to trade her for American hostages abroad have been rejected by the U.S. government multiple times.

Her release date from federal custody is set for 60 years from now.