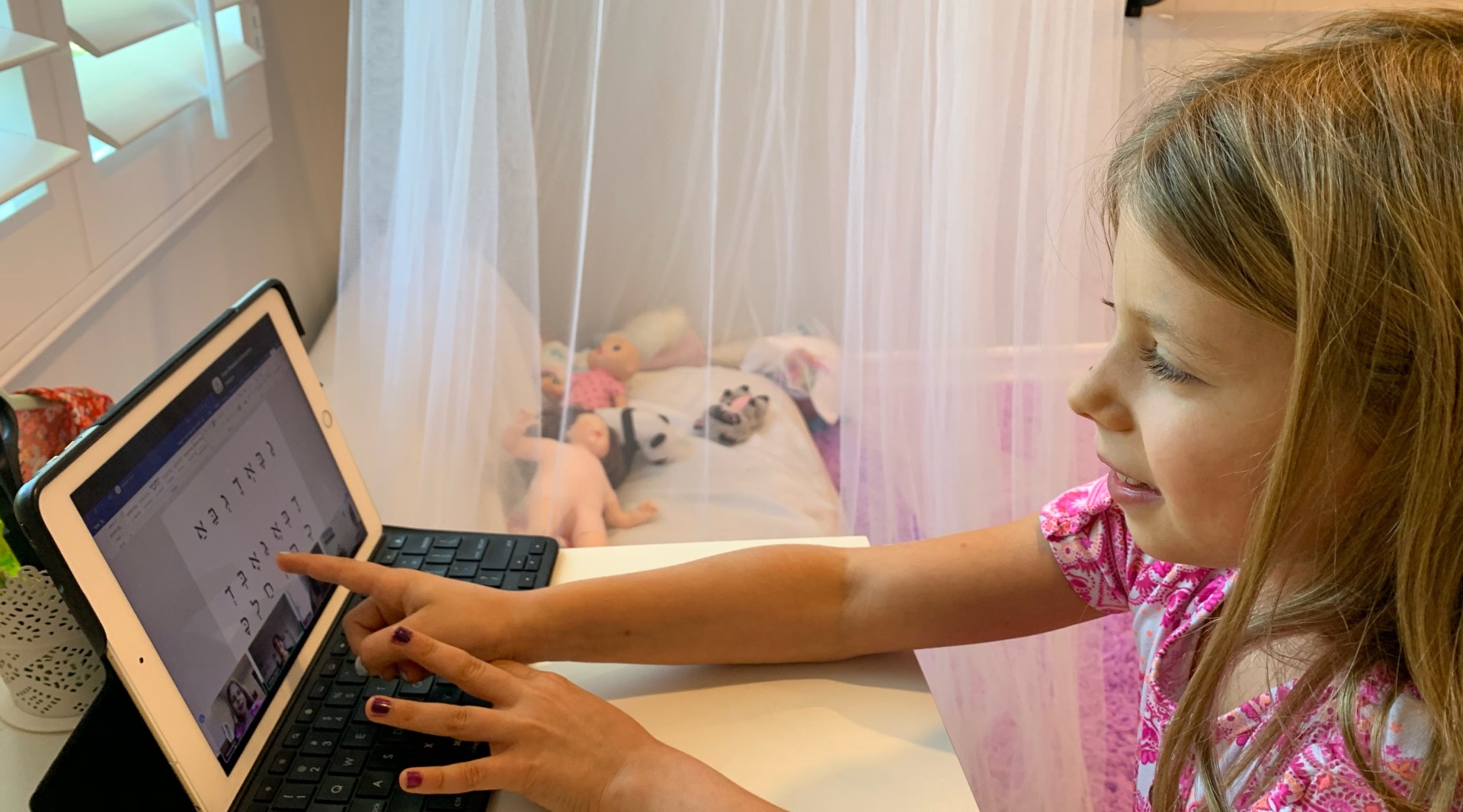 The small virtual classrooms of the Ofek Hub program encourage interaction between students and teachers, as well as among students. (Courtesy of Israeli American Council)
Advertisement

When the first wave of coronavirus infections reached the American South, Rabbi Charlie Cytron-Walker of Congregation Beth Israel in Colleyville, Texas, knew the religious school’s classes at his synagogue would have to move online.

But he also knew his institution was ill-equipped to make that change.

“We are a small congregation – 170 households – and our religious school is generally run by volunteer teachers,” Cytron-Walker said. “We don’t have a paid religious school director. When COVID hit, we literally had no clue what we were going to do. We did not feel that parents without education training would be able to create a safe environment or teach online.”

Searching for options Amy Hamilton, chair of Beth Israel’s education committee, discovered the Ofek Learning Hub, an Israel-centered, Jewish distance learning program taught by experienced educators and accessible to students of all ages in North America and beyond.

Launched in the spring by the Israeli American Council, or IAC, the program offers classes on an array of topics related to Judaism, Jews and Israel in Hebrew or English (or both). The idea is to maintain and cultivate American Jews’ connection to Israel even at a time when travel to Israel is not possible because of the coronavirus.

Ofek Hub’s development is part of the IAC’s general approach to identifying needs in the American Jewish community and coming up with innovative ways to meet them. Founded by Israeli Americans living in California, the IAC has made this sort of startup mentality part of the organization’s DNA.

In this case, Ofek Hub was created to meet the urgent needs of North American Jews left without an educational framework when COVID-19 suddenly forced them to shutter their schools, synagogues and Jewish community centers. Its small virtual classrooms (10-15 students) encourage interaction between students and teachers, as well as among students. The program’s mostly Israeli-American teachers have been trained to utilize the latest online learning tools specifically suited for distance learning. Most of the classes run for five sessions and cost $65.

While many of the classes are directed at young children, teens and adults use Ofek Hub, too. So far, more than 1,600 students have taken over 100 courses through the program.

“We saw a community in need,” said Shoham Nicolet, IAC’s co-founder and CEO. “When the pandemic struck there was confusion. Everything stopped in one day. People weren’t clear what education would look like.”

Although the hub was born in response to the pandemic, it’s not just for the pandemic, Nicolet said, highlighting Ofek Hub’s broader mission to help Jews in the Diaspora strengthen their ties with Israel, Israelis and the Jewish people as a whole.

“Ofek will be here for many years,” Nicolet said. “We said there is a crisis, but what opportunities can the crisis bring to the Jewish community? This is an opportunity to make Israel-focused Jewish education affordable and cutting-edge for individuals and institutions.”

For the IAC, creating Ofek Hub is a natural progression. The organization was founded 13 years ago to help Israelis living in North America feel more anchored to both Israel and their local Jewish communities.

IAC’s outreach has helped an entire generation of young Israeli Americans feel connected to their Israeli roots and one another, he said. The organization’s events also draw large numbers of young Jews whose families are not Israeli.

Ofek’s online community is similarly helping people feel more connected at a time when Jewish institutions have had to scale back or eliminate in-person gatherings due to COVID-19, Nicolet said.

The courses include Hebrew ulpan language learning (beginner to advanced) as well as classes on Israeli innovation, Israeli culture, food, music and diversity, the Israeli martial art of Krav Maga, the effects of technology on children, a course geared to bar- and bat-mitzvah kids, book clubs and more.

Michelle Levin, 55, and her daughter Gabriella Levin-Meer, 16, of Marin, California, decided to study Hebrew with Ofek because they wanted to maintain and improve the level of Hebrew they attained while living in Israel a few years ago.

“Taking this class online is such a game changer,” said Michelle Levin, who enrolled in consecutive Level 2 Hebrew classes for adults. Gabriella took Hebrew with other high school students.

“The flexibility of being able to take a class from home means that I can just sign in and go,” Levin said. “You also can’t beat the price. The teachers are all very professional and devoted. They truly want to provide a class that meets all of the students’ needs.”

Levin said she felt a growing sense of Jewish community thanks to the interactions with her classmates, who hailed from Los Angeles to Las Vegas to Brooklyn.

“The instructors are very innovative in using technology to bring the Hebrew language alive,” she said. “They often use short videos of songs and conversations which show natural language and then we discuss. The classes are very well organized.”

On the class WhatsApp group, students and teachers continued to chat during the week.

“We are truly creating an online community of learners – something that I wasn’t sure would be possible,” Levin said.

Bobbi Feinstein from Las Vegas enrolled her 12-year-old granddaughter Sari and one of Sari’s friends in an Ofek baking class for tweens.

“The kids loved the class and the recipes,” Feinstein said. “Sari isn’t fluent in conversational Hebrew, so the teacher used the cooking class to teach Hebrew in a fun and engaging way. The amazing thing was that my granddaughter did not even notice she was learning Hebrew.”

Thanks to the class, Feinstein said, when she and Sari are baking together, her granddaughter enthusiastically teaches her what she has learned.

“It’s been a win-win,” Feinstein said.

When Beth Israel partnered with Ofek, the synagogue worked with the program to create content customized to the congregation’s needs. Today, all of its Hebrew school classes are run by the hub.

In one Sunday school class, teacher Mor Cohen taught the seven days of creation with an animated video and game that required her young charges to match words (sky, animals, fish, birds, day, night, rest) with days one to seven. The students chatted not just with Cohen but with one another.

“My bar for success was not hearing complaints,” Hamilton said. “In reality, the students are saying they’re getting a lot out of the experience. They’re continuing their Jewish education while feeling part of something. What more can we ask?”