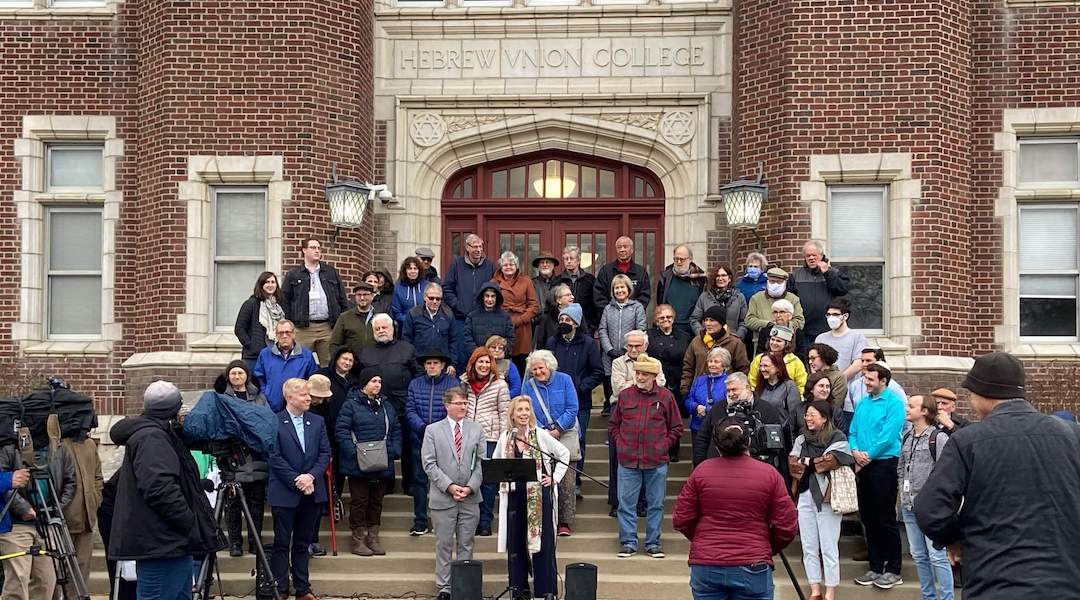 Opponents to Hebrew Union College's restructuring plan hold a "Rally for our Rabbis" on the school's Cincinnati campus, April 7, 2022. The school board voted April 11 to approve the plan. (Courtesy of Lew Ebstein)
Advertisement

(JTA) – Hebrew Union College will officially stop ordaining rabbis in Cincinnati, the Ohio city where the Reform seminary was founded in 1875.

The seminary’s board of governors voted Monday in New York City to approve a strategic plan that centers on enrolling all rabbinical students at HUC’s campuses in New York and Los Angeles. The Cincinnati rabbinical program will “sunset” after all currently enrolled students are ordained by the end of the 2026 academic year.

The plan was approved by a more than two-thirds majority, according to the school. Its approval comes after years of declining revenue and enrollment at the school — and months of bitter debate across the Reform community.

“We recognize the pain that this decision causes and expect to take the appropriate time and care to implement this decision in a sensitive and constructive manner, in collaboration with our community,” HUC President Andrew Rehfeld said in a statement acknowledging Cincinnati’s renown as the historic center of American Reform Judaism.

Rehfeld, board chair Sue Neuman Hochberg and chair-elect David Edelson called the decision a “first step” in an email to the school community sent more than two hours after the vote concluded.

“This vote was a first step toward transformational change for HUC-JIR and the Reform Movement — as we are bound together in the recognition that Judaism must honor its history and tradition while adapting to fundamental changes in the world around us,” they wrote.

HUC says it is not closing its Cincinnati campus and will maintain the Klau Library, Skirball Museum and American Jewish Archives in Cincinnati. In the coming years, according to the plan,  HUC will also create a new low-residency rabbinical and cantorial program based on the campus.

The school’s small doctoral program, which has been based in Cincinnati, will over the coming years be offered at its other campuses, too, Rehfeld told the Jewish Telegraphic Agency last month.

The vote was closely monitored by the broader HUC community, including faculty, staff and alumni serving Reform congregations across the United States and beyond. In two open letters that circulated among the HUC community in the weeks leading up to the vote, opponents to the plan outnumbered supporters by a factor of around three to one.

Opponents said they would view the plan’s passage as a sign the Reform movement was abandoning non-coastal Jews. They contended the plan would not produce enough savings to justify its implementation; would discriminate against students who are unable to study in cities with high costs of living; and could potentially lead to further closures in Cincinnati.

Opponents made several last-ditch efforts to avert the plan’s passage, including threatening to withhold individual donations to the school as well as congregational dues to the Reform movement should it pass. Ohio’s attorney general also alerted the school that the plan could be in violation of its nonprofit agreement, and thus potentially warrant an investigation.

No members of the Cincinnati faculty supported the proposal, and one publicly derided it in a speech in full view of the school’s president. About 100 opponents attended a “Rally for our Rabbis” Thursday evening in Cincinnati, according to public radio station WVXU, where Louise Bettman, the great-great granddaughter of HUC’s founder, Rabbi Isaac Mayer Wise, spoke and suggested that the attorney general’s letter might be the group’s last, best chance to stop the plan.

Some HUC faculty and alumni supported the plan, which its authors, HUC Provost Rabbi Andrea Weiss and Rabbinical School Director Rabbi Dvora Weisberg, researched by conducting hundreds of interviews over a period of two years. A group of influential Reform rabbis pledged to make up any shortfall in congregational dues incurred because of the board vote.

The plan’s backers said it would help the school reorient itself amid its ongoing financial and enrollment crisis. Over the past 15 years, enrollment at HUC’s three American campuses fell by 37%, with the largest drop, 60%, coming in Cincinnati. Meanwhile, the Reform movement has seen dues from congregations fall by two thirds over the same period, reducing the movement’s ability to pad the seminary’s stretched budget.