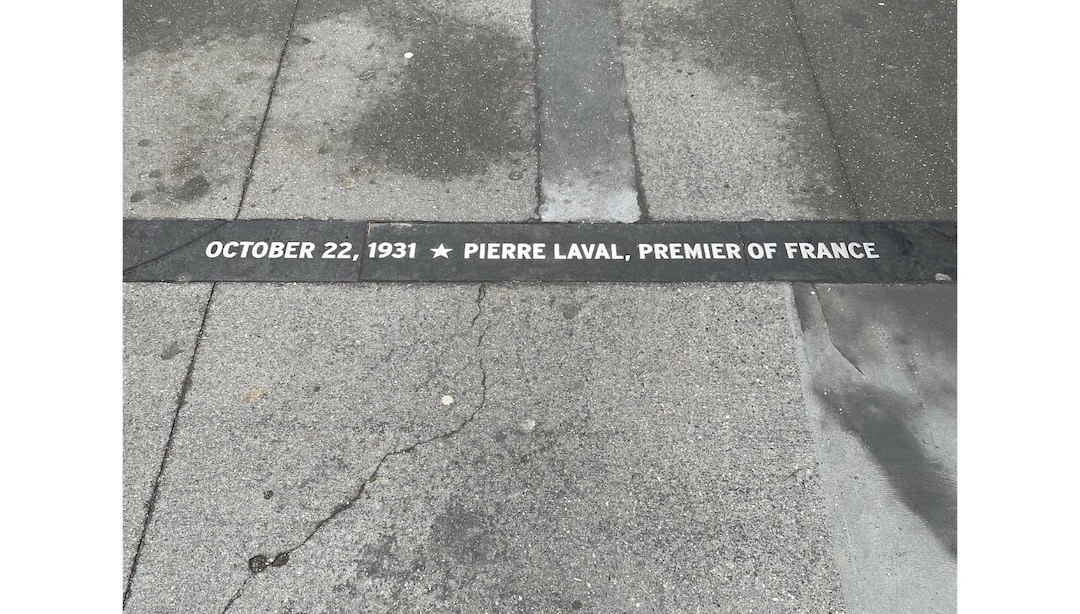 A sidewalk plaque along Manhattan's "Canyon of Heroes" remembers a ticker-tape parade in 1931 honoring Pierre Laval, who would go on to serve as the head of France's Nazi-aligned Vichy government. (Jacob Fishman)
Advertisement

(JTA) – Statues of Presidents Thomas Jefferson and Theodore Roosevelt were recently removed from, respectively, the New York City Council chamber at City Hall and the entrance to the American Museum of Natural History on Central Park West. Municipal officials, acting amidst a wave of sensitivity to historical slights, noted Jefferson’s role as a slaveholder and the Roosevelt statue’s demeaning depiction of Native Americans.

Regardless of their shortcomings, neither U.S. president has ever been accused of dispatching tens of thousands of people to be killed in gas chambers. But two people honored by New York City have been.

For most of the past two decades, plaques honoring Philippe Pétain and Pierre Laval, under whose watch as leaders of the Hitler-allied Vichy regime approximately 77,000 Jews living in France were murdered, have been on prominent display in New York City.

The Pétain/Laval government promulgated draconian antisemitic laws, “aryanized” or seized Jewish property and rounded up thousands of Jews for deportation from France to Nazi death camps in German-occupied Poland.

Yet black granite markers engraved with Pétain’s and Laval’s names remain untouched on Broadway’s Canyon of Heroes in lower Manhattan.

The Pétain and Laval plaques and 204 others embedded in the sidewalks between Battery Park and Chambers Street commemorate individuals and groups celebrated with ticker-tape parades beginning in 1886. On Oct. 22, 1931, Laval, then prime minister of France, starred in his parade. Four days later, Marshal Pétain, the French army’s commander-in-chief at the end of World War I, was escorted up Broadway by 2,000 uniformed men and three bands.

At that time, neither of them had yet descended into ignominy; that happened during World War II. Both were tried for treason in 1945, found guilty and sentenced to death. Laval was executed but Pétain’s sentence was commuted to life imprisonment.

The plaques, however, were installed in 2004 — not 1931 — by which time Pétain and Laval had been notorious for over 60 years. Imposing these blights on the New York City landscape in the first place didn’t appear to ring alarm bells — a fact that speaks volumes in and of itself.

Serge Klarsfeld, one of France’s most prominent authorities on the Holocaust, revealed in 2010 that Pétain, the chief of state of Vichy France from 1940 until 1944, had personally and significantly worsened conditions for Jews in France: A draft of his government’s first Law on the Status of the Jews (“Statut des Juifs”) of October 1940, which defined who was Jewish and which excluded Jews from large segments of French public life, included Pétain’s handwritten notations making the law ever more strict.

For his part, Laval, the head of the Vichy government, told German and other correspondents at a news conference in September 1942 that he intended to continue deporting alien Jews — that is, refugees and other Jews who did not hold French citizenship — from France. “No man and nothing,” Laval declared, “can sway me from my determination to rid France of alien Jews and send them back where they came from.” 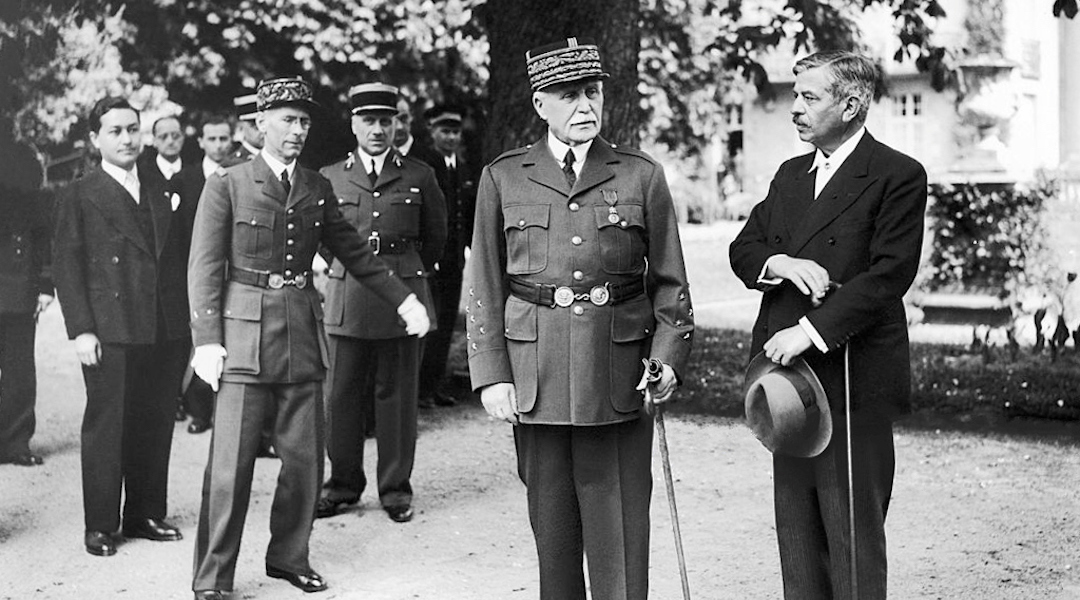 Marshal Philippe Pétain and Pierre Laval in the park of Sevigne Pavillion in Vichy, France, in 1942. (Keystone-France/Gamma-Keystone via Getty Images)

What’s more, while most of the Jews sent from France to the Nazi death camps were indeed foreign or stateless Jews, large numbers of native French Jews were deported and killed as well.

Symbolism matters. A lot. And for better or worse, Pétain and Laval have come to epitomize Nazi collaboration at its worst. In France, no one except for ultra-right political extremists like Éric Zemmour — a reactionary (and, unfortunately, Jewish) fringe candidate who finished a distant fourth in Sunday’s first round of French presidential elections — wants to have anything to do with either of them. The last French street bearing Pétain’s name, in the village of Tremblois-lès-Carignan, was renamed in 2011.

In 2017, with Confederate monuments coming down across the United States, attempts were made to have the Pétain and Laval plaques removed from Lower Manhattan. At first, then-Mayor Bill de Blasio agreed, tweeting that “the commemoration for Nazi collaborator Philippe Pétain in the Canyon of Heroes will be one of the first we remove.”

His resolve did not last. In January 2018, the Mayoral Advisory Commission on City Art, Monuments, and Markers recommended that the Pétain plaque should stay where it is, arguing that “if a marker is accurate, and not celebratory of egregious values or actions, it should not be removed.”

The commission did throw a bone of sorts to those who were offended by the Pétain plaque. It suggested “re-contextualizing” it by adding explanatory texts so as to “reframe” the markers “as a teachable moment.” It is not clear whether the commission discussed the Laval plaque at all.

Four years later, not only are the Pétain and Laval markers still there, but no “contextualizing” content has been added. These two Holocaust enablers with blood on their hands continue to receive equal billing with the likes of Winston Churchill, Dwight D. Eisenhower, David Ben-Gurion, Queen Elizabeth II, Charles de Gaulle and Nelson Mandela.

I am not taking issue here with the removal of the Jefferson and Roosevelt statues. But if they were taken away, what possible rationale can there be for not doing the same to the Pétain and Laval plaques?

Petain and Laval, incidentally, are not the only World War II villains to be glorified in the United States. The Von Braun Center in Huntsville, Alabama, is named for Wernher von Braun, who, prior to reinventing himself as a key architect of the American space program in the 1950s and 1960s, was a Nazi major who lethally exploited inmates at the Dora-Mittelbau concentration camp to manufacture the Third Reich’s V-2 ballistic missiles. A large bust of von Braun stands prominently outside NASA’s Marshall Space Flight Center, also in Huntsville. My father, who was imprisoned at Dora for several months, said that conditions there were worse than he experienced at Auschwitz.

As the son of two survivors of Auschwitz and Bergen-Belsen, I urge Mayor Eric Adams to take a fresh, hard look at the obscenity of heroizing two antisemitic Nazi collaborators on the streets of New York City, and fervently hope that he will have these markers removed without further delay. It’s the morally right thing to do.