Why these Israeli farmers became heroes after killing their crops (hint: it’s in the Bible) 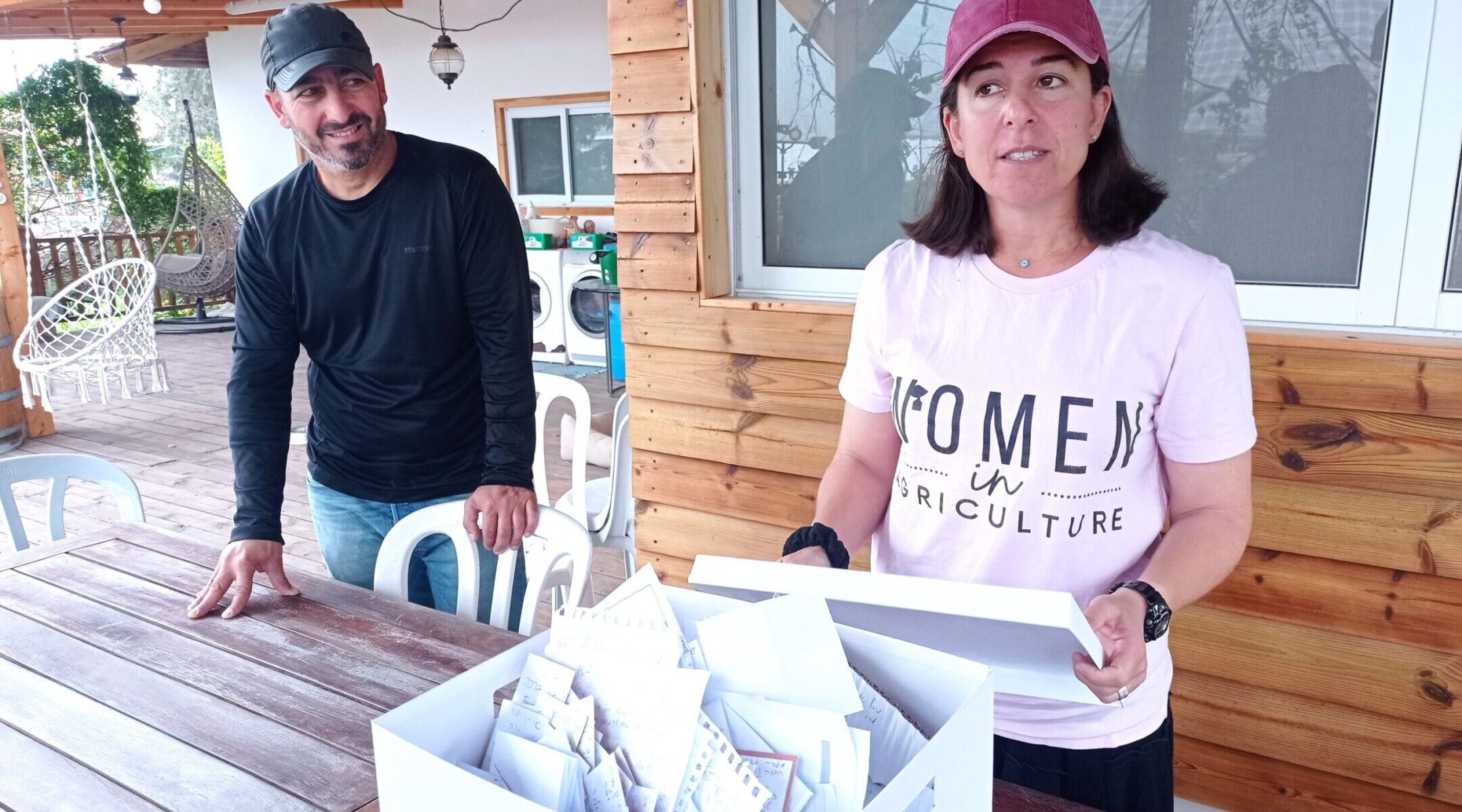 MOSHAV AZARIA, Israel (JTA) – Doron Toweg’s farmyard is as quiet, peaceful and unruffled as his voice. Apart from the occasional bleat from Gila and Simcha, two sheep kept by Toweg and his wife Ilana, the farm is perfectly still.

It’s a far cry from the bustle that unfolded on a daily basis here prior to Rosh Hashanah holidays of years past, when the chatter of Thai farmhands competed with the rumble of idling tractors — the kind Toweg drove in TV ads for Strauss, one of Israel’s largest food distributors, back when he was the company’s exclusive eggplant supplier.

That came to an end in 2014, when Toweg deliberately destroyed his entire eggplant crop. He injected their irrigation lines with poison in a dramatic effort to comply with a biblical commandment requiring Jews to let their fields lie fallow every seven years.

“Strauss thought I’d fallen on my head,” Toweg said about the distribution company after he announced his plans to comply fastidiously with the rules relating to the commandment, called shmita.

The company severed ties with him. His other customers, contractors and creditors were far from pleased, as well.

Yet the sudden spiritual turn made Toweg, a third-generation farmer in central Israel, a guru for a growing movement of Orthodox Jews in Israel and beyond who want more farmers to eschew a loophole that has allowed Jews to continue working their land — and making a profit from their crops — during shmita years.

Another shmita year began with Rosh Hashanah in September. In its first two weeks, Toweg estimates, 3,000 people came to the farm seeking blessings from him. The first was a man in full haredi garb holding a crumpled piece of paper with a directive by Rabbi Chaim Kanievsky, perhaps the foremost rabbinic authority among haredi Jews whose funeral last month was one of the largest in Israel’s history.

The note instructed the man to seek out a blessing from a farmer who keeps shmita because there is “no one more faithful.” 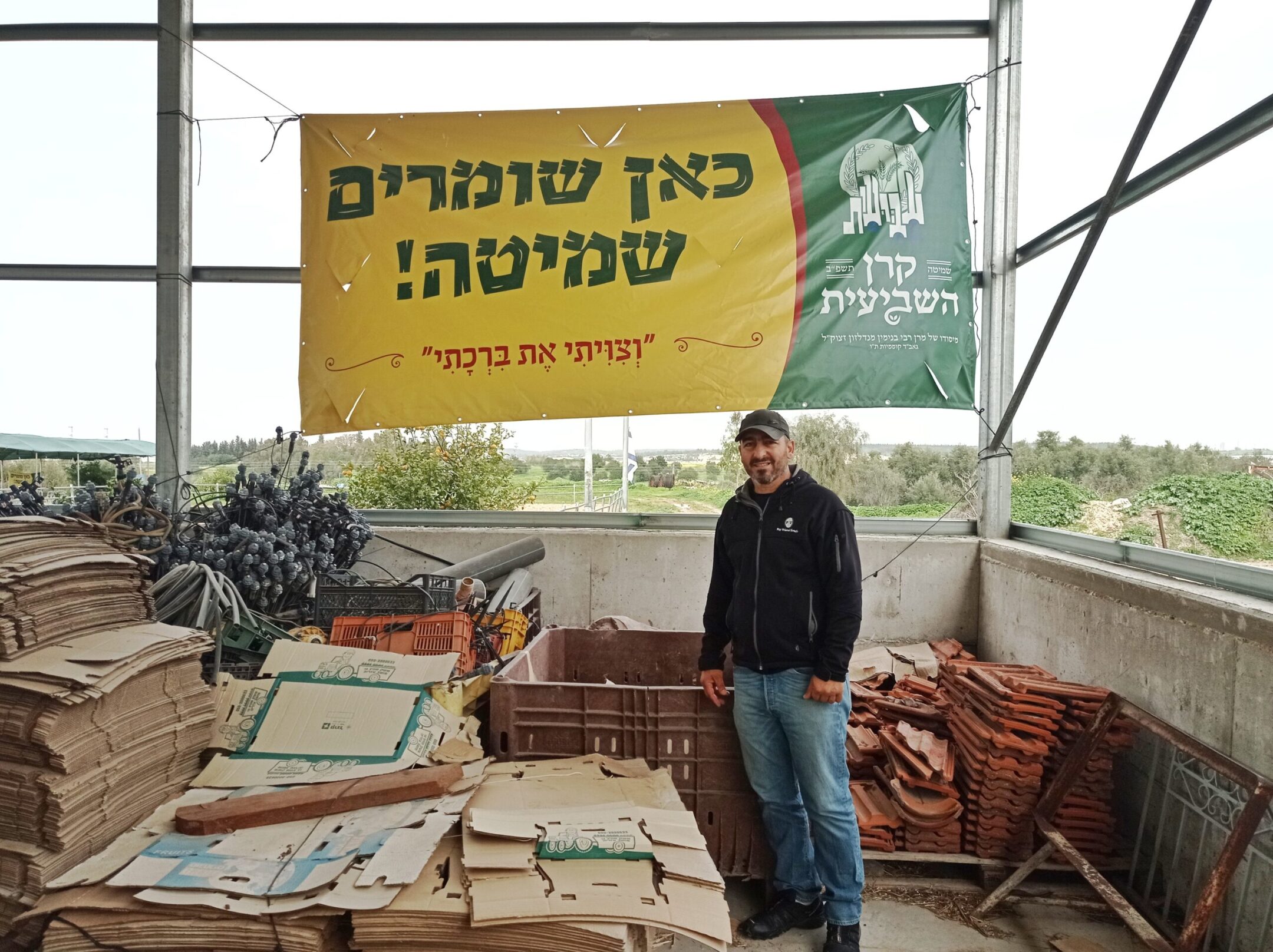 As the farmer’s wife and the catalyst for her husband’s faith, Ilana Toweg has become an unwitting miracle worker, delivering hope for scores of people who arrived at her doorstep begging her to intervene on their behalf and appeal to God to bless them with good health, a child or a spouse. Every Friday evening after lighting the Shabbat candles, Ilana spends upwards of two and a half hours reading the requests she received.

At one point, Geller surprised Ilana Toweg by inviting her up on stage to meet two Hasidic women to whom she had given a blessing back in 2014. The women, who had been struggling with infertility, gave birth to boys, including a set of twins, on the same day nine and a half months after receiving a blessing from Toweg.

“I was shaking and crying and extremely emotional,” Toweg said of meeting them. “But,” she added, smiling, “there’s a huge sense of responsibility knowing that anyone who asks me for a baby might now expect to give birth in nine and half months.” 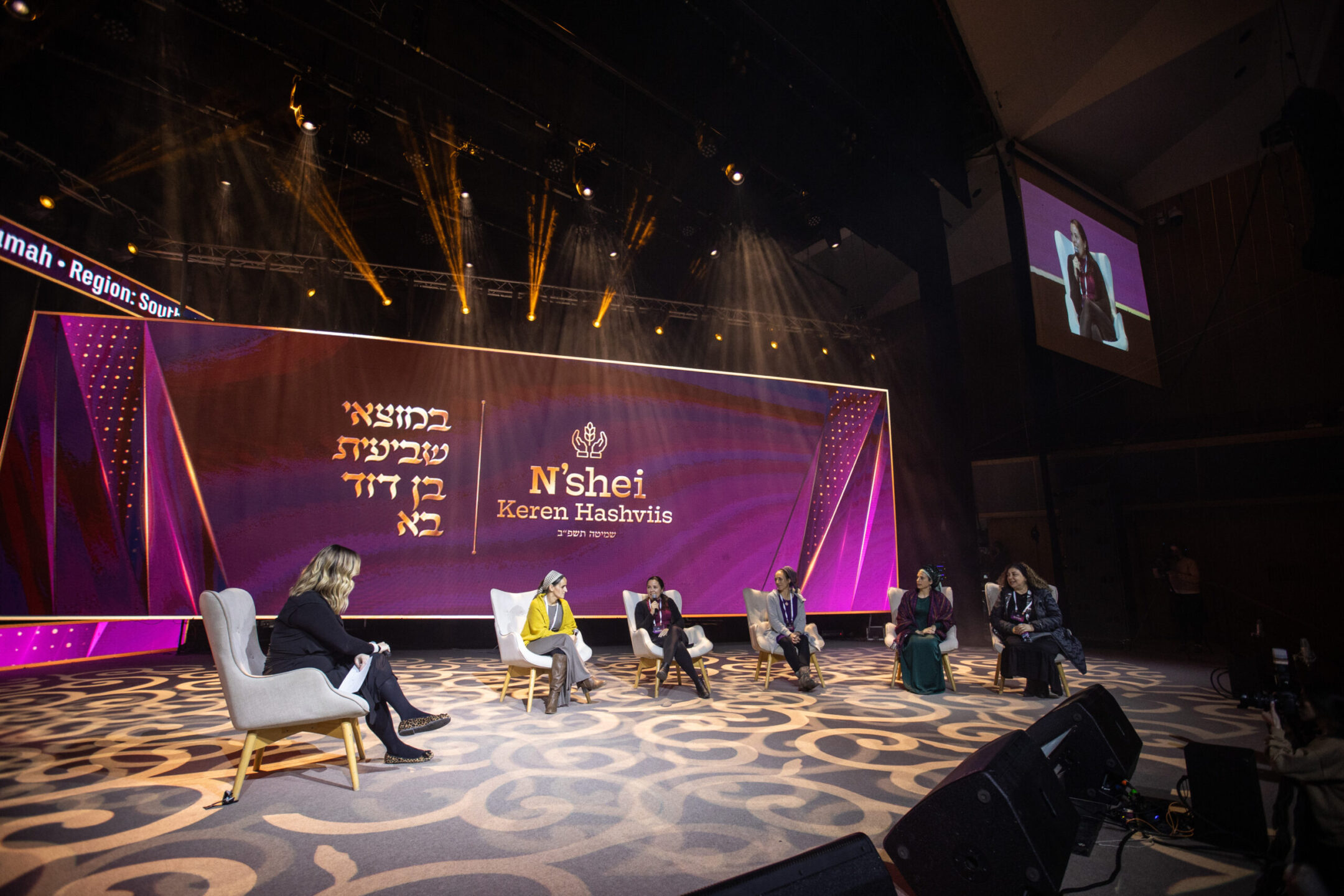 The event was organized by Keren Hashviis, an organization that is the engine of the shmita movement. The group is spending $66 million this year to subsidize Israeli farmers who aren’t producing crops. Seven years ago, during the last shmita year, the group’s budget was just $27 million.

Shmita applies only to land in Israel that is owned by Jews. (Some Jewish farmers outside of Israel are engaging with shmita despite not facing any religious obligation.) Half of all that land is fallow this year, compared to a quarter seven years ago, according to Keren Hashviis’ North American CEO, Shia Markowitz.

“The mitzvah of shmita is every Jew’s no matter where he lives. But since we can’t all do it [on a practical level], God created another way for us to all do it together,” he said. “It’s the ultimate unifier.”

Deciding to comply with the strictures of shmita wasn’t easy for Doron Toweg. Although he is not Orthodox himself, he already followed many of the agricultural-related commandments such as tithes and orlah, or waiting three years before using the fruit from a newly planted tree.

But when it came to shmita he had always relied on the rabbinic loophole — known in Hebrew as a heter mechira — that allows for the symbolic sale of farms to non-Jews for the duration of the sabbatical year. The loophole is similar to the one that allows Jews to sell their chametz, or food that is not kosher for Passover, to non-Jews during Passover.

Ilana Toweg had already declared that her husband would observe the next shmita year for non-religious reasons — “It was for completely selfish reasons. I wanted him to rest,” she said — when a chance encounter with a young haredi Orthodox Jew a month before Rosh Hashanah in 2014 cemented Doron Toweg’s resolve.

“He told me, ‘You’ll give up so easily on a mitzvah that we’ve waited 2,000 years in exile to be able to perform?’” Toweg recalled. “That touched something inside of me and I thought, ‘if I won’t do this mitzvah, who will?’”

At first, Toweg decided to allow only his open fields, totaling around 100 acres, to lie fallow, but to keep the greenhouses under the loophole formula he had used until then. Immediately after Rosh Hashanah and the start of the shmita year, he planted 20,000 eggplant saplings.

But then representatives from Keren Hashviis told him they wouldn’t assist him unless he kept shmita in its entirety.

Toweg agreed, and at the organization’s rabbis’ instruction, he turned off the water for the eggplants to allow them to die. The rabbis expected the plants to die within a week and a half, but Toweg knew better. Eggplants are sturdy vegetables that can last a while without water. More than a month later the starved plants had grown to 2 feet and showed no intention of surrendering. Uprooting the plants was impossible so the only choice left was to inject a disinfecting agent into the irrigation system. When released, the chemical would turn to gas and the plants would die.

“For so long these plants had been waiting for water, and finally they hear the system being turned on but it’s not water, it’s gas. Poison,” Toweg said, his voice steady. “Of course there’s this association with Jews who wait for water but it turns out to be gas and suddenly everyone dies. That was a difficult stage for me.” 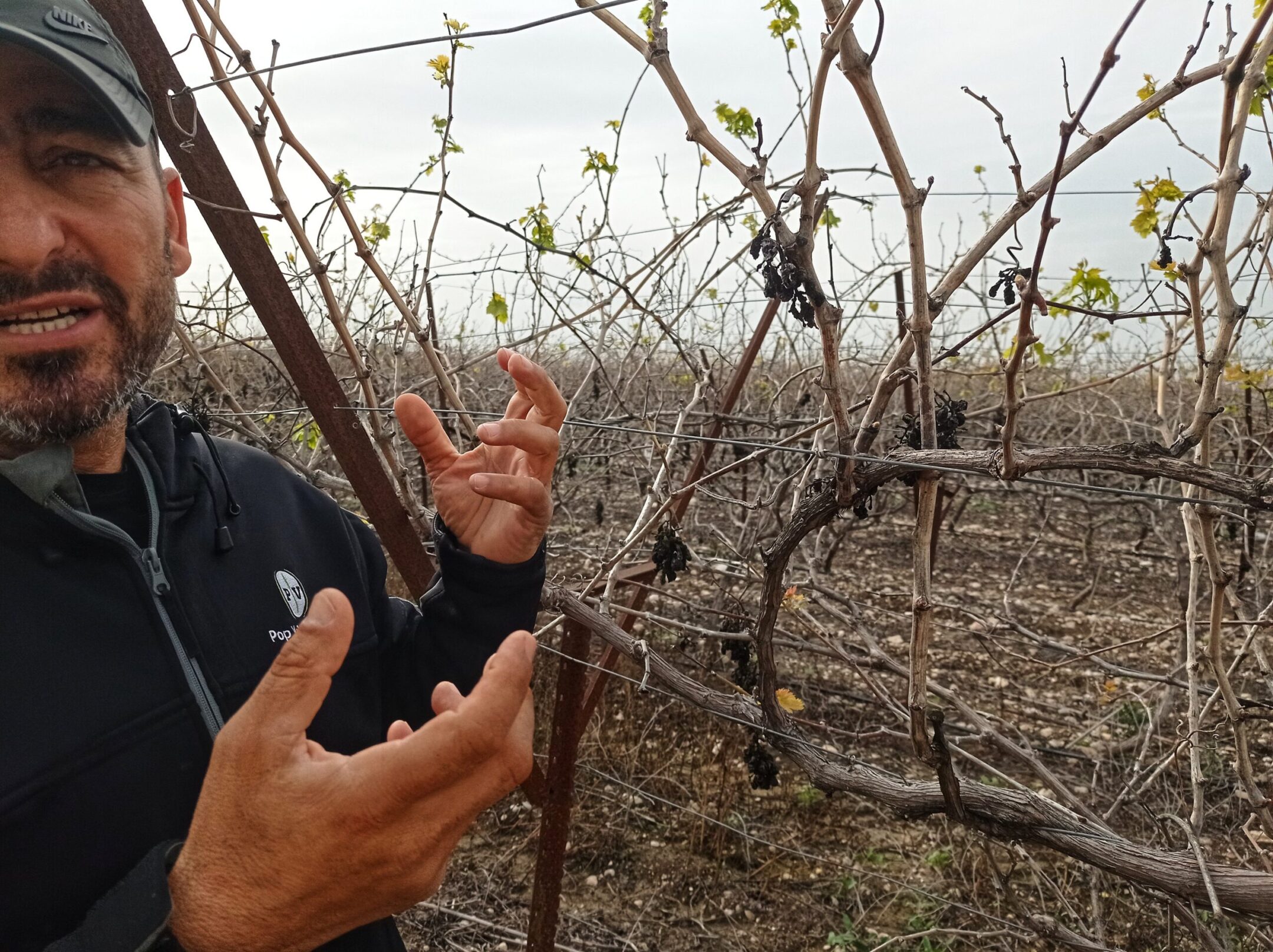 Doron Toweg is not tending his farm’s crops this year, in keeping with a strict interpretation of Jewish law. (Deborah Danan)

Payments from Keren Hashviis have mitigated the challenge. The group is supporting more than 3,500 farmers over 169,500 acres of land, contributing up to 45% of each farmer’s operating expenses and covering big-ticket items like rent and combines. The organization will help in other ways as well, for example liaising with relevant governmental bodies and negotiating with landlords to lower rents during shmita.

What it won’t do is directly replace lost income. But there are other sources of support for Israeli farmers, including small subsidies from the government and donations from women, many elicited by Geller.

The celebrity chef, who did not grow up Orthodox, said she was deeply touched by the stories she heard from Israeli farmers while sourcing Israeli honey and spices for her line of foods. She launched her own campaign, Support Our Farmers, which raises funds from all Jews regardless of religious affiliation and with a mission that goes beyond facilitating shmita.

“Food is an incredible way to connect people to their identity and heritage. But the next generation won’t carry on farming because big business has taken over,” Geller said. She noted that the average age of Israeli farmers is 65 with farmers accounting for only less than 1% of the population. (Farmers account for 2-3% of the population in other developed nations.) 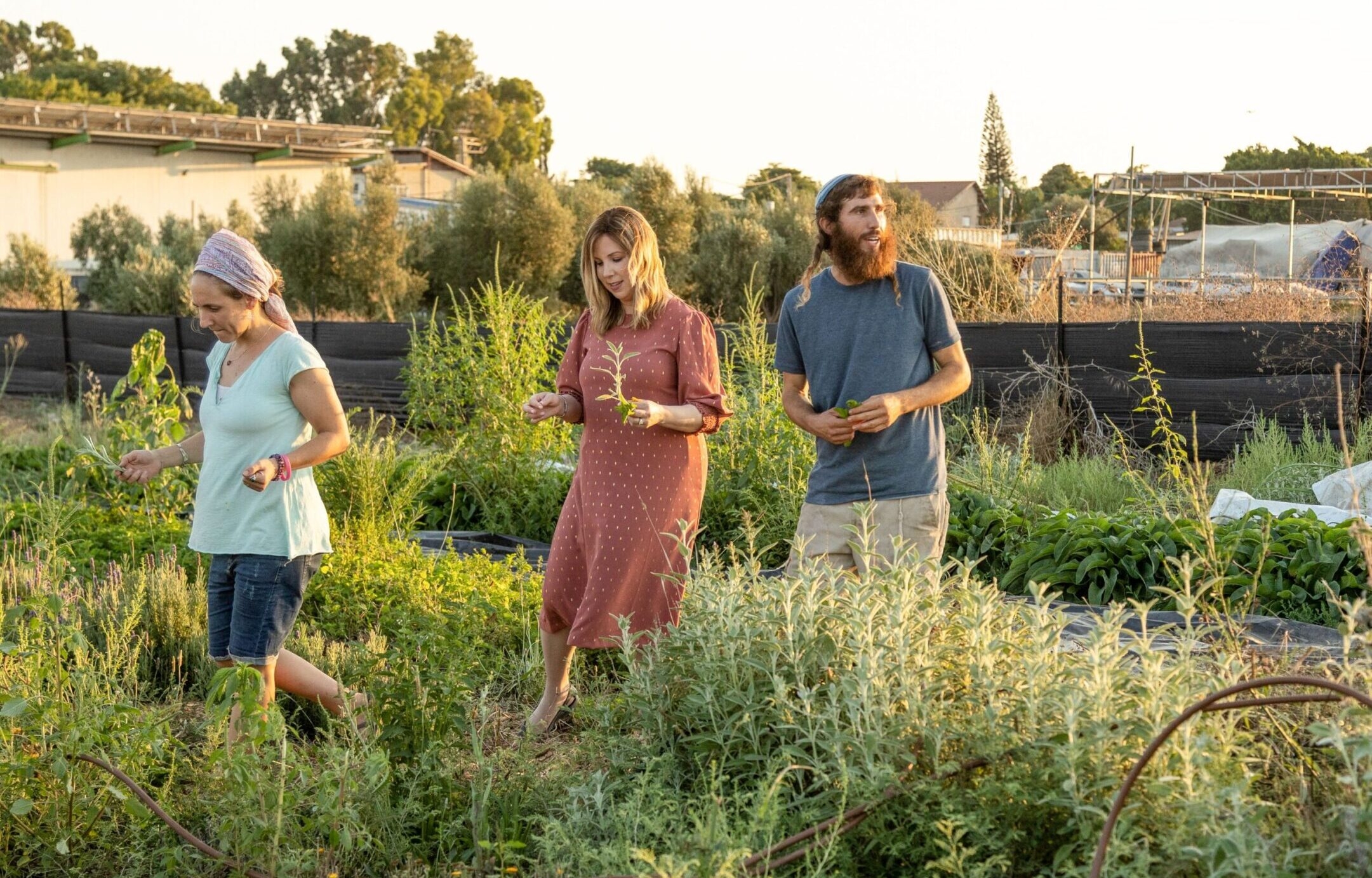 Geller said educating and raising awareness about shmita has been a mammoth task. A marketing poll she carried out prior to the launch of her campaign found that 50% of respondents thought that shmita was synonymous with shmatta, the Yiddish word for “rag.”

“I myself grew up in a very Jewish and Zionist home, marching in the Israel Day Parade every year. Why didn’t I know about shmita?” the Philadelphia native asked.

But not everyone in Israel, including within its religious leadership, agrees that strictly abiding by shmita is necessary or even preferred. Proponents of heter mechira within Israel’s national religious bloc — what Americans might refer to as Modern Orthodox — regard the 125-year-old loophole not only as legitimate but optimal. They think preserving Israel’s agricultural solvency — as well as the livelihoods of individual famers — is of paramount importance, and relying on foreign-grown produce or that grown by non-Jews is antithetical to many of religious Zionism’s central tenets.

Rabbi Ari Kahn, a senior lecturer in Jewish studies at Bar-Ilan University, argues that modern-day realities can and should trump other considerations, including the most stringent interpretations of Jewish law.

According to Markowitz, there are problems with heter mechira. At the top of the list, he said, is that there isn’t any oversight ensuring that all the halachic, or Jewish legal, conditions are met. 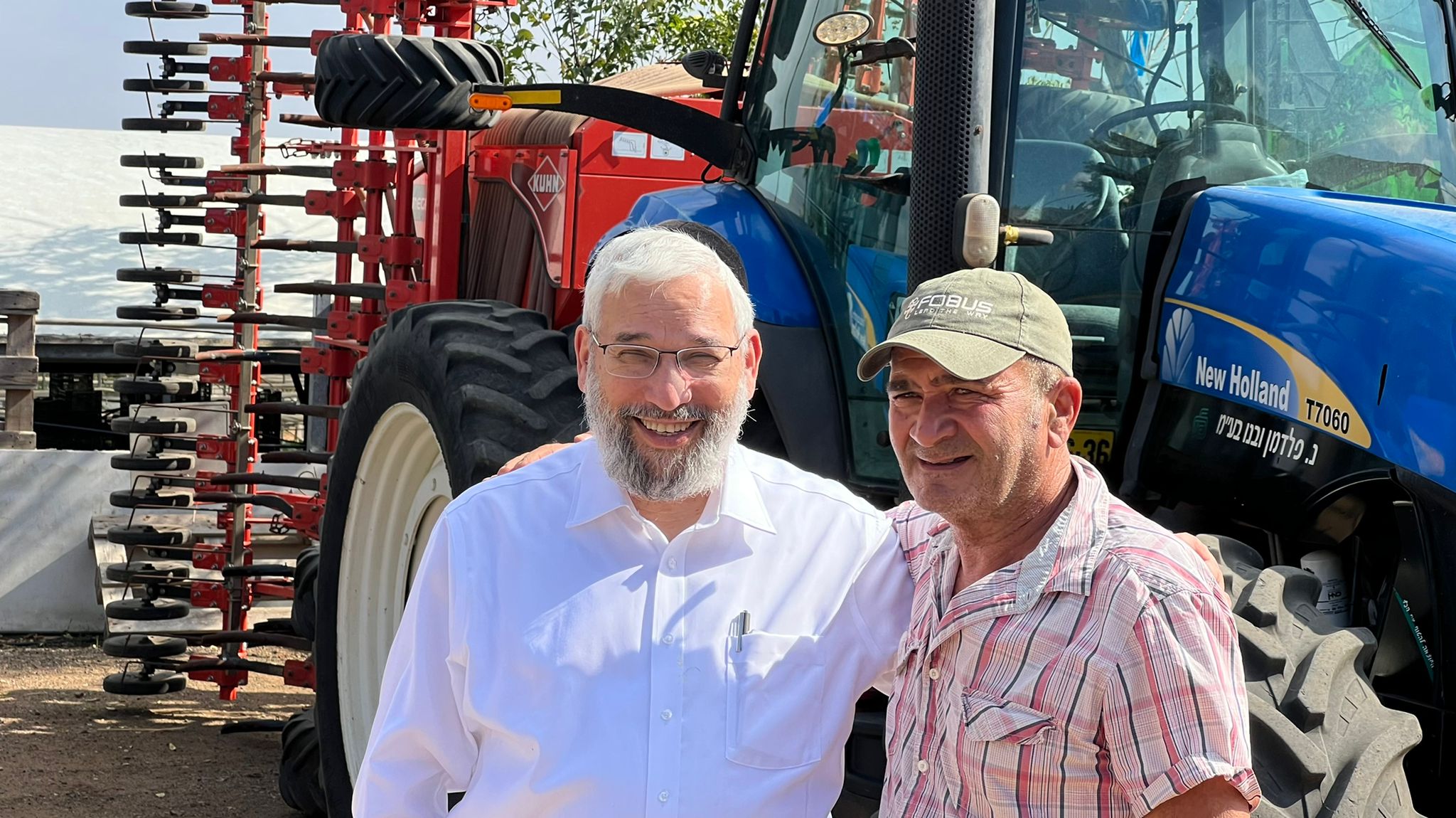 Rabbi Shia Markovitz of Keren Hashviis poses with one of the Israeli farmers that his organization subsidizes during shmita years, when they do not farm their land. (Courtesy Keren Hashviis)

“From the moment the farmer signs the heter mechira document, there is zero supervision. There is no one coming to check that Jews aren’t working the land [and violating] halacha,” he said.

Kahn concedes that he is not aware of any supervision throughout the year on the part of the Israeli Rabbinate, but maintains that over the years many steps have been taken to fine-tune the provisos of heter mechira. For example, the Rabbinate now coordinates with the Ministry of Justice to ensure that the sales are legally binding in a civil court and not just a rabbinic one.

(A third option for observing shmita is a practice called otzar beit din — in which the rabbinic court takes ownership of the land, thereby rendering it ownerless. And in some cases, farmers might get special permission to cultivate crops in hothouses that do not require planting in the ground.)

For the Towegs, there are myriad reasons to observe shmita fully and not enough to continue justifying heter mechira.

“While it might be difficult for the farmers, it’s still possible to keep shmita properly today because there is not the risk of starvation there once was,” Ilana Toweg said.

In addition to the agricultural benefits of allowing the soil to rest, Toweg also notes the environmental impact of shmita. Shmita ingrains values, she said, that dovetail with sustainability practices espoused by Jewish environmental activists in recent years. But apart from saving vast amounts of water and energy, the financial constraints have compelled the Towegs into a life of reduced consumption.

“Having to tighten your belt makes you think about everything you buy before you buy it,” she said.

Nevertheless, Toweg said, it was the spiritual and emotional growth that kept her and her husband in the game this shmita cycle.

“It’s about getting proportions and remembering what’s important in life,” she said. “You stop the rat race and suddenly you have time to focus on the spiritual and time to spend with your family.”