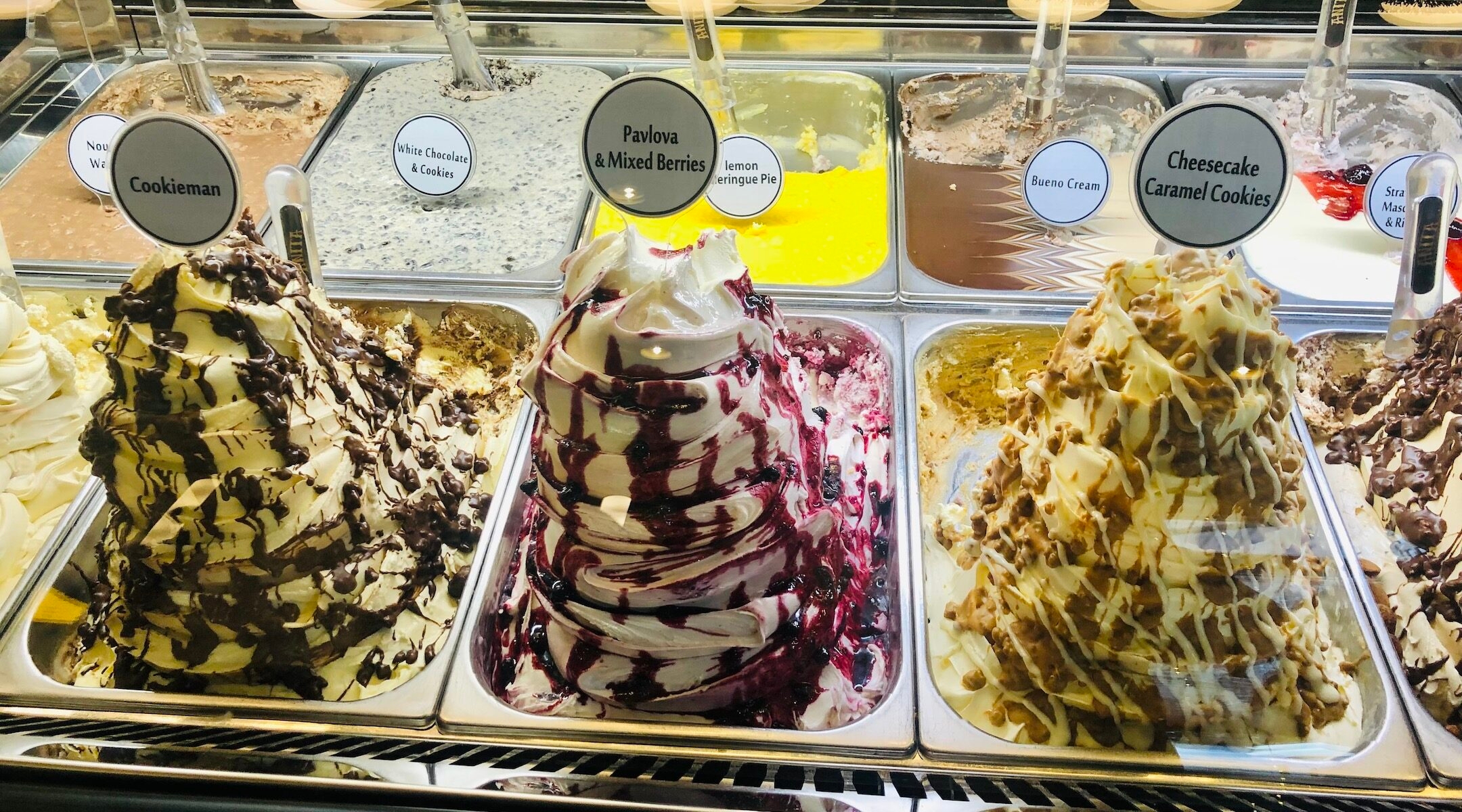 Some of the unique flavors on offer at the Upper East Side outpost of the Israeli chain Anita -- La Mamma del Gelato. (Risa Doherty)
Advertisement

(New York Jewish Week) — If you were looking for something positive that happened in New York since the beginning of COVID, head to the northwest corner of Second Avenue and 81st Street.

There, you’ll spot a whimsical, pastel-green storefront with the words “Anita Gelato Factory” written in neon pink letters, along with a heart-shaped logo reminiscent of a sailor’s tattoo. Inside, you’ll find an array of some 36 flavors of gelato — many of them in over-the-top combinations like popcorn with honey and caramel or tiramisu and hazelnut mousse.

This uptown spot is the first continental U.S. outpost of Anita — La Mamma del Gelato, an international chain that originated in one woman’s kitchen in Netanya, Israel in 1998. Anita Avital, 71, is a sabra (a native Israeli) with Moroccan roots, a single mother of four and grandmother of nine, who is heralded by her family for being a perennial balabusta, the kind of homemaker always baking cakes and pastries and making homemade jam.

According to Adi Avital, Anita’s elder son and a co-owner of the company, his mother and brother, Nir, started making traditional Italian gelato at home in 1998 with a small ice cream machine. The gelato quickly became very popular with their neighbors. After creating a base using a “secret formula,” they started experimenting with flavor combinations.

Later, when Nir was serving in Israel’s army, he began selling their creations from a cart on weekends. He started mixing Anita’s cremeschnitte (a custard and chantilly cream cake) into the gelato to create their Napoleon flavor, and then experimented by adding her homemade pear or walnut jam, too. Emboldened by their success, they opened their first shop in Tel Aviv in 2002.

Eventually, they expanded to four stores in the Tel Aviv area. After a slow start, word spread and Anita’s became a destination for ice cream-loving Israelis, who called it “the best gelato shop in the city” or even “the world” on TripAdvisor. They opened a factory in 2010 in Pardes Hanna and went international in 2013, opening a series of shops — first in Australia, followed by Spain, Cyprus and Puerto Rico.

According to co-owner Alon Levi, Anita’s had been wanting to open in New York for a long time. “New York is amazing,” he told the New York Jewish Week. “Every company wants to be in New York.”

Instead of choosing a highly touristed location, like Times Square or Battery Park, they chose an unassuming spot uptown. “We chose the neighborhood that we thought best suited the character of Anita, in terms of atmosphere and population —  the location very much reminded us of the first neighborhood where we opened in Israel, Neve Tzedek,” Adi said, referencing the fashionable Tel Aviv neighborhood. “We [also] wanted to start at a place where part of the audience is familiar with Anita from Israel.”

The Upper East Side is indeed home to a sizable Israeli community, according to Sharon Eyny, the vice president of development for the Israeli-American Council.

As it turns out, uptown turned out to be an ideal location for a pandemic-burdened New York City. Even though the shop opened in September 2020, when the city’s streets were mostly free of tourists, local residents started pouring in, eager to support a new neighborhood business.

As a result, from the time it opened, Anita’s has been a bit of a phenomenon. “Of all the dessert places on the Upper East Side, Anita is the one that constantly has a line out the door and wrapped around the side,” said Rebecca Shamsian, who lives nearby. “Even if it’s the dead of winter, people still bundle up for their cold gelato.” Shamsian said she was especially thrilled that the gelato is certified kosher.

Nir Lev, an Israeli New Yorker, had never tried Anita’s in Israel. After his first visit, he said he quickly became a regular. He said he prefers tiramisu or nougat flavors; his daughter, meanwhile, usually opts for vanilla. He said his freezer “always” contains some of their gelato. “I’m happy to see businesses thrive, especially at this time,” he said, adding he plans to check out their Israeli locations next time he is in the country.

Typical offerings include Cookieman (chocolate and biscuit), Salted Bagel (yes), Bamba (a popular Israeli peanut-flavored corn puff snack) as well as a flavor made with Israeli za’atar crackers. They also offer their own take on European candy bar flavors, like Loacker and Kinder Bueno. According to Avital, their bestsellers are pretzel chocolate (this reporter’s personal favorite), vanilla and pistachio.

Gelato is the Italian word for ice cream. However, there is a difference between the two: Ice cream is made with cream, milk, sugar and egg yolks, whereas gelato is made with more milk, less cream and no eggs, and is consequently lower in fat. At first glance, the serving cups appear small — as do the traditional Lilliputian spoons — but the scoops are piled high and the flavors are creamy and dense.

At the store, the “gelatier,” who has undergone many months of training in Israel, makes the traditional eggless Italian-style gelato fresh each day and adds the nuts, spreads, jams, and other mix-ins, which are flown in from the Anita factory in Kfar Vitkin, Israel.

Building off their success, Anita’s will be expanding its Upper East Side store, which will be 3,000 square feet and will accommodate a third display freezer. They’re in the process of opening an additional shop in Manhattan, on Broadway and 26th Street, and adding stores in  Los Angeles, Miami and London.

Despite their growing popularity on a global scale, Levi still traces Anita’s success back to its roots: A kitchen in Netanya where a single mother created sweets with and for her children. “Her motto in life is, make your house feel filled with pleasure and happiness,” Levi said.

Updates: An earlier version of this article misstated the number of children Anita Avital has. She is the mother of four children and the grandmother of nine. Also, the “Cookieman” flavor of gelato is chocolate and biscuit, not chocolate and meringue. The piece has been updated accordingly.