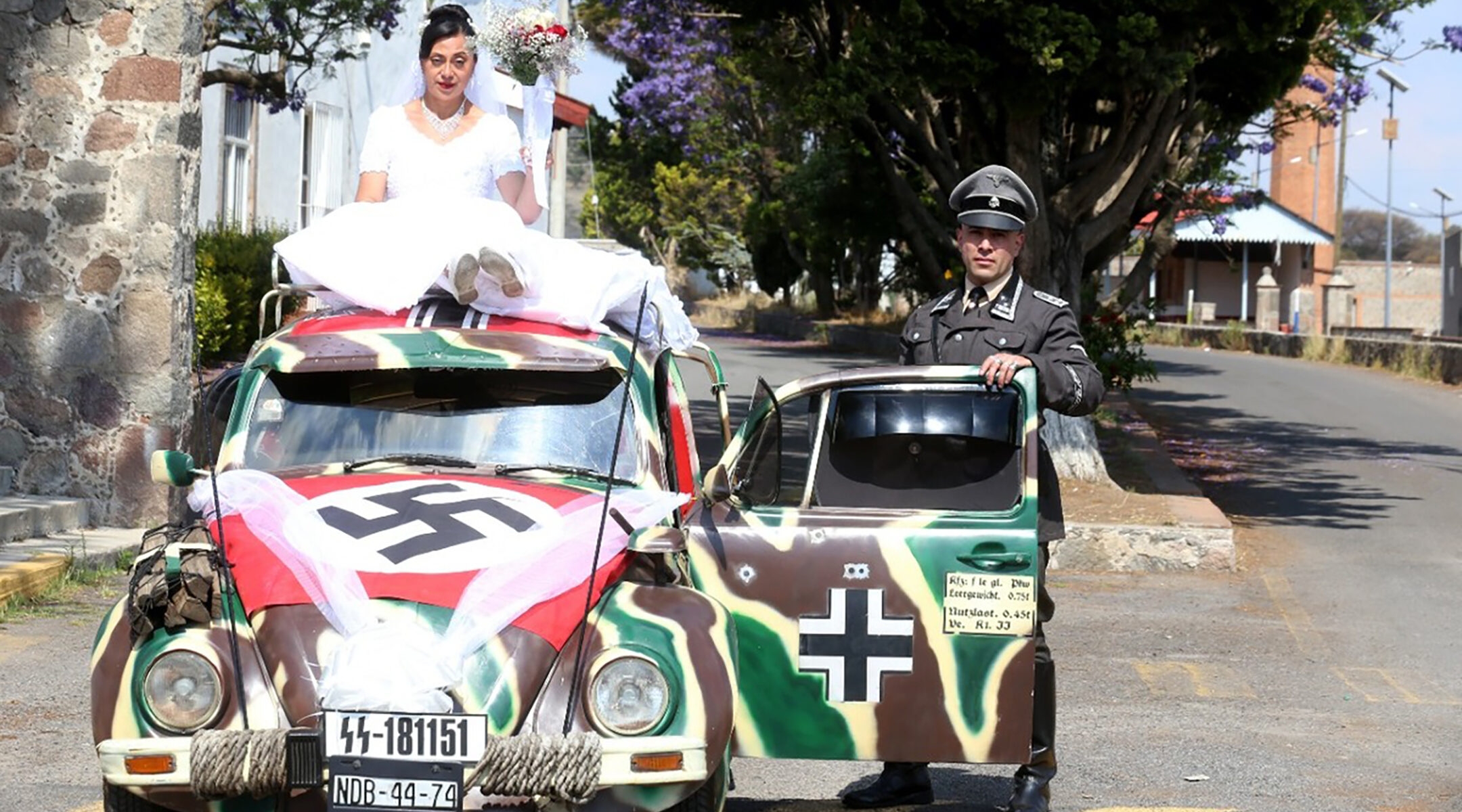 (JTA) – Jewish and antiracism groups in Mexico are raising alarm after a couple married in a Nazi-themed wedding there last week.

The wedding of the couple, who have been identified only by their first names, Fernando and Josefina, took place in Tlaxcala, Mexico, on April 29 — the 77th anniversary of Adolf Hitler and Eva Braun.

In photos from the nuptials, the groom is dressed as a Nazi SS officer and the bridge is seen sitting on top of a Volkswagen Beetle that has been painted in a camouflage pattern, draped in a Nazi flag and given a fake license plate with SS bolts.

Fernando, whom Mexican media said is a public official, said the couple chose the Nazi theme because they venerate Hitler.

“I understand that for many people, Hitler represents genocide, racism and violence. People, on the other hand, make judgments without having all of the facts,” the groom told Mexican news outlet Milenio. “Hitler was a vegetarian who rescued his country from famine and returned to his people the lands lost during World War I. His friends and family adored him. We were led to believe that Hitler was a racist, but he came to greet Jesse Owens at the 1936 Olympics.”

“Mexican laws prohibit antisemitism,” tweeted the National Council to Prevent Discrimination, a government group known as CONAPRED. “That is why we speak out against this manifestation of intolerance and all forms of discrimination.

Officials with the Latin America division of the Simon Wiesenthal Center had initially criticized the government for not moving more swiftly to condemn the wedding.

Ariel Gelblung, the group’s Latin American director, said in a statement that the wedding was evidence that Mexico should adopt the International Holocaust Remembrance Alliance’s definition of antisemitism and “incorporate it into its legislation to prevent such hateful behavior.” (Dozens of countries have adopted the IHRA definition, which is controversial because it categorizes some criticism of Israel as antisemitic; countries with the definition in place still experience antisemitism.)

Mexican media have reported additional details about the couple — including that their son Reinhard is named after Reinhard Heydrich, a Nazi general, and their daughter Hanna is named after a woman on Hitler’s team of pilots who was one of the last people to see him alive and remained an admirer her whole life. The couple were civilly married on Hitler and Braun’s anniversary in 2016 and held a religious ceremony this year, telling local media that they would have waited another year had they not been able to book a Catholic mass for April 29.