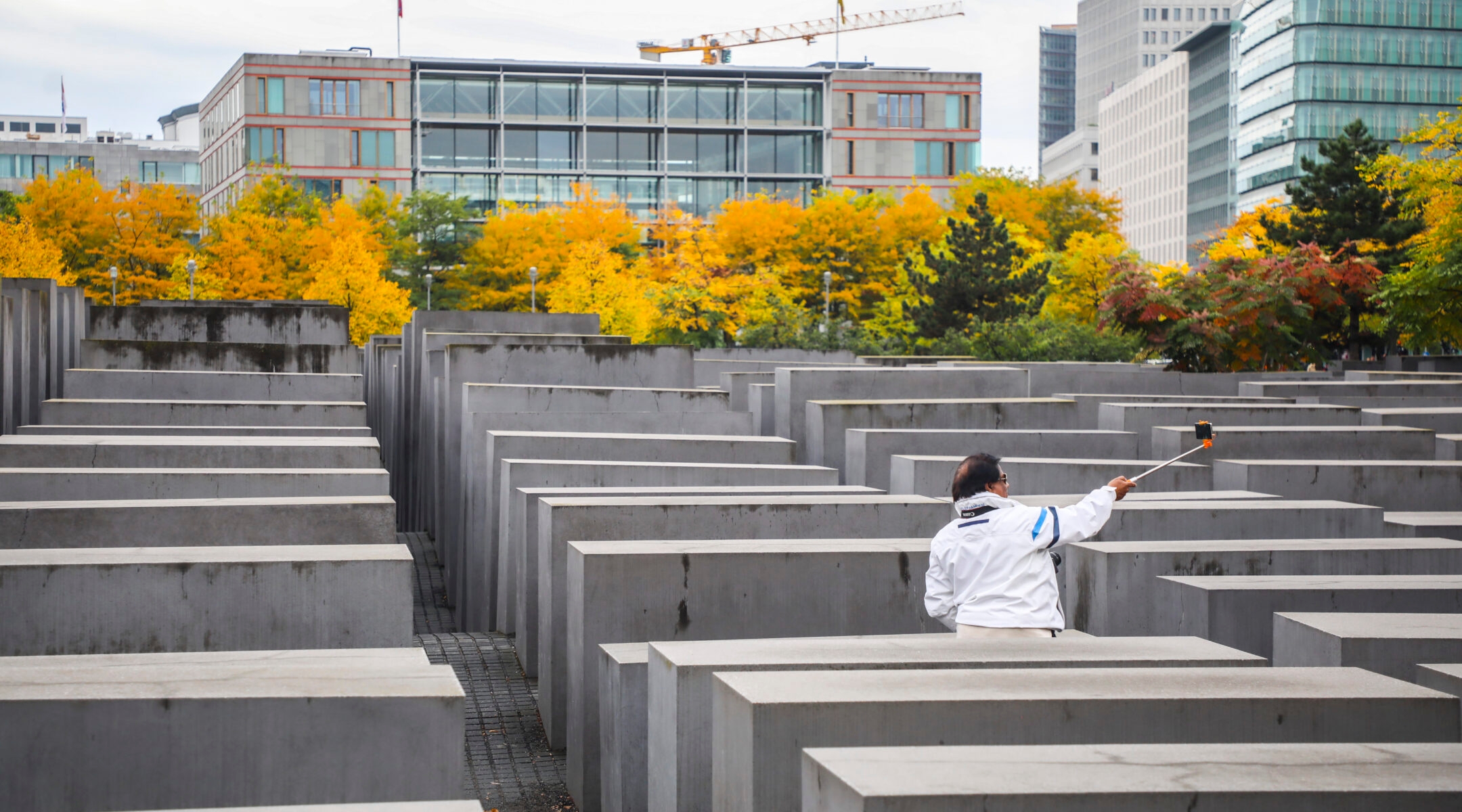 A tourist takes a selfie inside the Memorial To The Murdered Jews Of Europe in Berlin, Sept. 25, 2019. (Beata Zawrzel/NurPhoto via Getty Images)
Advertisement

(JTA) — Apple users who want to include pictures taken at the Anne Frank House, Auschwitz or other Holocaust-related sites in their photo albums will have to work to make that happen, under the terms of a recent software update.

Apple recently changed its software so that pictures taken at Holocaust sites are suppressed from automatically generated albums that can be created through the company’s Photos app. The tech news site 9to5Mac first reported the tweak, which affects iPhone and iPad users using the latest Apple operating system, last week.

The change is meant to avoid “creating some unwanted memories,” according to the site, which said only pictures taken at Holocaust-related sites are affected by the change.

Apple’s “sensitive locations” protections cannot be disabled, but users can still include the photos in albums that they curate by hand.

The tweak comes amid growing concern about Holocaust trivialization in selfies and photomontages made possible by portable device technology. Pictures of visitors to concentration camp sites smiling, jumping and dressed inappropriately have drawn criticism when they are shared on social media.

The tweak also comes amid a growing reckoning by technology companies about how their products may contribute to antisemitism and other forms of hate. Facebook and Twitter, for example, announced only in 2020 that they would bar Holocaust denial from their social media platforms. Antisemitism is still rampant, according to watchdogs who say the companies could be doing more to protect Jewish users.

9to5Mac did not report any comment from Apple about the reason for the change. But Paul Monckton, a columnist for Forbes, suggested it owed to the “potential for Apple’s algorithms to use them insensitively, perhaps with inappropriate music or juxtapositions with other unrelated content.”

The tweak means that photos that the machine determines were taken at Auschwitz, Majdanek and several other former Nazi death camps in Poland and beyond will not be featured on automatically-generated photo albums created using Apple’s Memories feature.

The list of “sensitive locations” deemed inappropriate for inclusion in automatically generated albums also includes Israel’s Yad Vashem Memorial; the Dachau concentration camp in Germany; the United States Holocaust Memorial Museum; the Berlin Holocaust Memorial; the Schindler Factory in Krakow; the Belzec, Chelmno, Treblinka and Sobibor death camps in Poland and the Anne Frank House in Amsterdam, according to the Forbes op-ed.