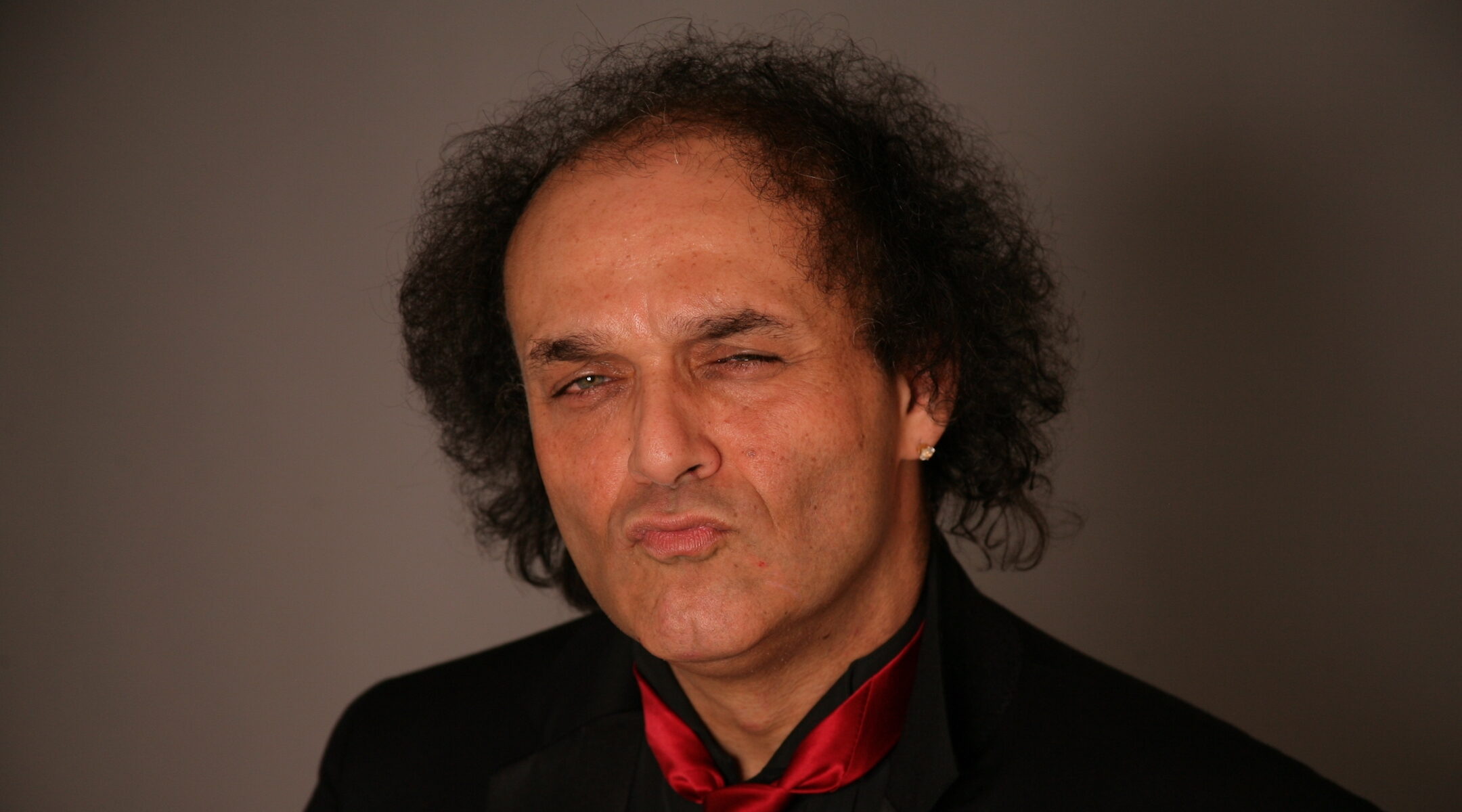 Dani Luv performed at Sammy's Roumanian six nights a week for more than twenty years. He plans on returning the Sammy's stage if and when the steakhouse reopens. (Courtesy)
Advertisement

(New York Jewish Week) – Sammy’s Roumanian, the one-of-a-kind Lower East Side Ashkenazi restaurant that’s been described as “a dark and dingy place” where “every night was a bar mitzvah,” has been sorely missed by many New Yorkers since it shuttered its doors for good in January 2021.

Former customers may find themselves longing for its chopped liver, prepared tableside with schmaltz and crispy onions, or lovingly recalling raucous evenings fueled by bottles of vodka served on ice. But if you’re feeling nostalgic for the musical stylings of Dani Luv — the man who entertained Sammy’s diners nightly for more than 20 years with schticky songs like “Hey Jew,” a take on the Beatles’ “Hey Jude” — you’re in luck: Luv will be back on stage this very Friday night in the East Village.

Luv will be performing at the after-party for “The Comedy ‘CLUB,'” a comedy show featuring an all-Jewish lineup presented by Lil’ Fish Comedy. Its producer, Ali Fischbein, hopes that, with Luv on board, the evening will devolve into the kind of party-like-we’ve-just-arrived-from-the-Old World balagan that made Sammy’s Roumanian famous.

Fischbein, 27, began producing comedy shows during the pandemic — her first few were held in an alleyway and served as fundraisers for the Sixth Street Community Center, which had become an emergency food distribution center during the early months of COVID-19.

These days, Fischbein is something of a veteran when it comes to Jewish-themed comedy shows. Last month, she partnered with Yonah Schimmel’s Knish Bakery and Old Jewish Men — the brand and Instagram account —  to do a comedy show in the back of the store, complete with a klezmer clarinetist. 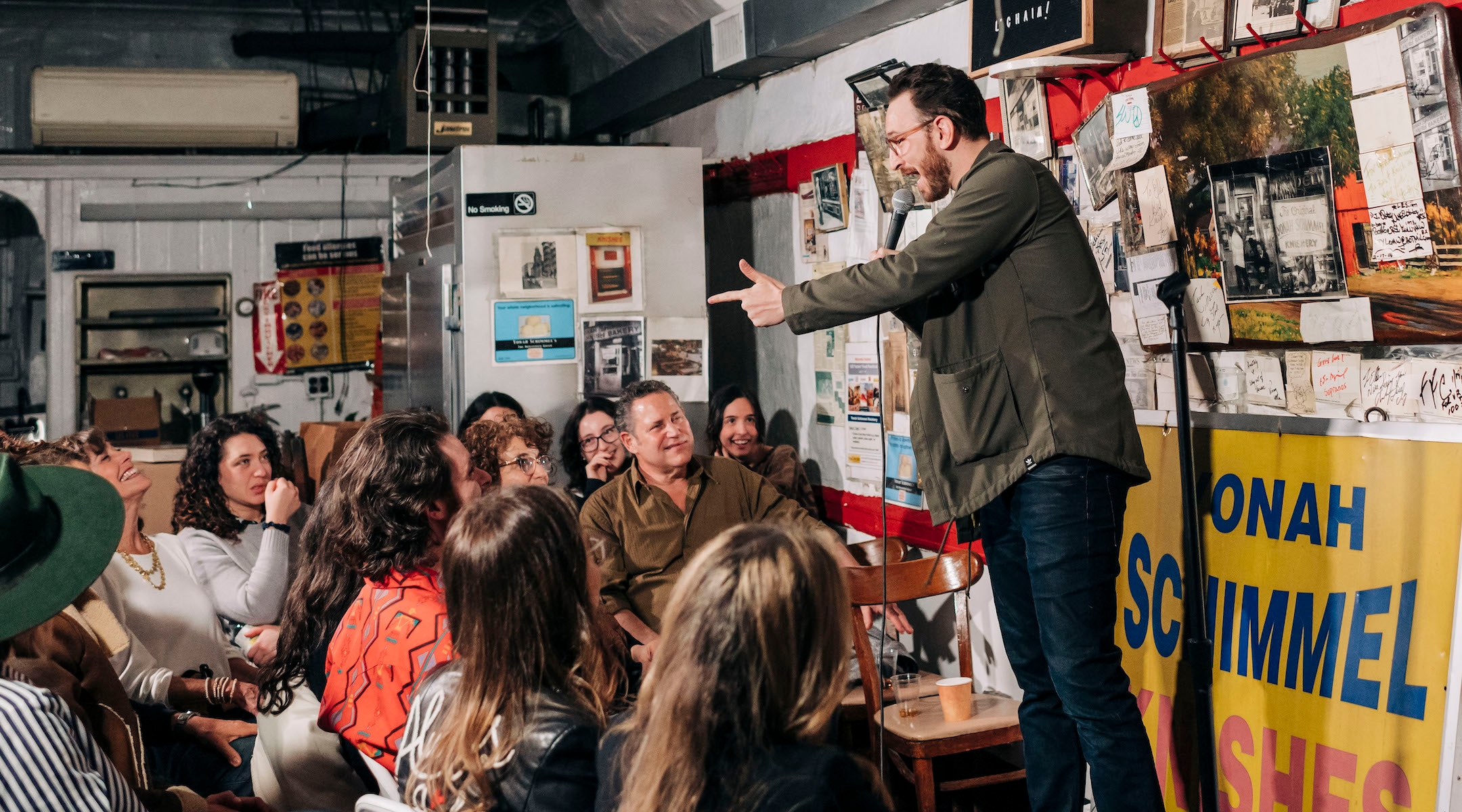 The comedy show in the back room of Yonah Schimmel’s Knishes on April 9, 2022. (Patty Brown)

“Being Jewish and being in comedy are kind of like a marriage,” Fischbein told the New York Jewish Week. “I’ve always considered myself a Yente, but the matchmaking in my world is creating shared experiences and connecting people — matchmaking comedy with an audience.”

As for Friday’s show, “We just wanted to create an experience where people can relive Sammy’s and laugh while doing it.”

Of course, there’s no reliving Sammy’s without its essential entertainer — Luv — who Fischbein booked through his website after seeing him perform at another event.

For his part, the 64-year-old, Israeli-born Luv — whose real name is Dani Lubnitzki — has been keeping busy with private events and gigs since the closing of the restaurant that made his career, with hopes of one day returning to the Sammy’s stage, which Luv says is a possibility.

(The New York Jewish Week was not able to confirm that, but when the restaurant announced its closure in early 2021, owner David Zimmerman said he intended to reopen again in a new location, writing in an Instagram post: “We may be closed now, but when all this is over and we feel safe enough to hold hands during the hora, we will be back stronger, louder, and tastier than ever before.”)

We caught up with Luv in all his glory ahead of his Friday night show to learn how he got started at Sammy’s, what he’s been up to since it closed and what it’s like bringing his style of entertainment to younger generations.

This conversation has been condensed and edited for clarity.

The New York Jewish Week: What is your origin story at Sammy’s Roumanian?

Dani Luv: It was amazing. I lived here [in New York] in the ’80s and had gone back to Israel for six years. In 1998, I had a very rough year in Israel economically, so I said, I’m gonna go back to New York where I have connections, and I’m going to look for some work for a year or two. I came back to New York on my birthday, Sept. 17, 1998. I didn’t even realize it was my birthday because everything was so rough when I made the decision to go back to the United States. Only when I was on the plane did I realize.

I lived with a friend for a couple of weeks, and I started to collect phone numbers of musicians. About two weeks after I arrived, one of them called me and said, “Do you know Sammy’s?” I had eaten there once and played a private party once in another upstairs — it was for the staff of a Billy Crystal movie that had just wrapped, but I’d never been downstairs.

One of the musicians there wanted to get rid of his Tuesday, Wednesday, Thursday performances. The rest is history. The place was amazing for me. It fits me so well. The place is very free, very New York. It looks like a shithole [but] with a lot of atmosphere. Great crowds. [When I started] the average age was 45 to 80. After 10 years, it became 25 to 45. It’s like the next generation was coming in all of a sudden.

After two years, my friend who did the Friday, Saturday, Sunday performances let me replace him because he had too many outside private gigs. Really, he couldn’t take the drunk people — there were so many drunk people. I love those sons of bitches. So it became six days a week, altogether for 21 years until March 2020.

How did you develop your act? Did you study any Yiddish vaudeville?

I sing covers: Sinatra, Billy Joel. Very official stuff. In terms of jokes, I like my jokes but it’s not exactly stand-up comedy, even though I call my act comedy and music. It’s mostly improv. I think about the audience, I talk about Jews and shiksas. It’s a very old fashioned Jewish, New York style. It’s little insults — people heckle me and I answer them back. It’s mingling with the crowd. Basically I sing and joke all night. Even in the middle of a song, I’ll make some joke about the couple that just came in. I’ll see a lady at the door and she just looks so Jewish, she’s not even there for 20 seconds and she’s already complaining.

At the end of the night, we did a lot of dancing. Again, dancing with humor.  When the new generation started to come, we added another half hour of live disco. So I was a DJ at the end, too. But again, I didn’t shut the f— up. I was talking and DJing and making people laugh.

What was your favorite part of the job?

I love to do what I do. It’s something that I’ve built. So there’s not just one highlight, it’s all the dancing over the years.

When we did a hora, it was a 15-minute hora, where the Jews and Christians and African-American and Chinese New Yorkers were all dancing. That’s something that can only happen in New York. It would stop and start and stop and start again, always with a lot of jokes in between. It was really comedy, dancing and music. It was always the highlight of the evening.

What have you been up to since Sammy’s closed?

The first couple months I did a few private parties, mostly fans from the Sammy’s crowd. But it was really rough the first year. In 2021 things got a little better. In September until just recently, I started in another restaurant called Bacall’s [Family Steakhouse in the Theater District].

The place was gorgeous — it looked like Saddam Hussein’s place. It was so beautiful it was disgusting. But nobody knew who I was or what I did. We were trying to do a nightclub from 8 p.m. to 11 p.m., but there was no advertising. You cannot do it via email. You need to put it in a paper — Sammy’s crowd isn’t one thing. You cannot aim for a certain minority or a certain age group.

Some Sammy’s people would come once, but they never came back. They tried to do the same food with a huge menu, but it wasn’t the same. I still got great reviews from people. It was a different crowd, because the restaurant was near Broadway, so it was people coming from all over the world. They saw me objectively, because they would come to eat before the show without knowing who I was. I was still successful, the reviews on Google were amazing.

But my contract is over and I didn’t really like the place anyway.

Why do you think Sammy’s is so important to both Jewish New Yorkers and to New York in general?

It was like nothing else. The style was Jewish. The food was close to Jewish, some things were very Jewish. It was basically Eastern European Jewish food. Very basic food, but great food.

There used to be a lot of nightclubs and, whether they were Israelis or Jewish, there’s nothing left. So I think it’s important to have at least one place that reminds us of the old days, that feels very authentic, that connects us to the Jews on the Lower East Side and Chrystie Street at the beginning of the century through World War II. It isn’t ever going to be the same location, unfortunately, but it’s also not too far.

What are you hoping to bring to Friday’s comedy show?

The same Sammy’s atmosphere. Mingling with the crowds, and making them laugh. Hopefully there will be dancing and singing as well. I’m very excited.