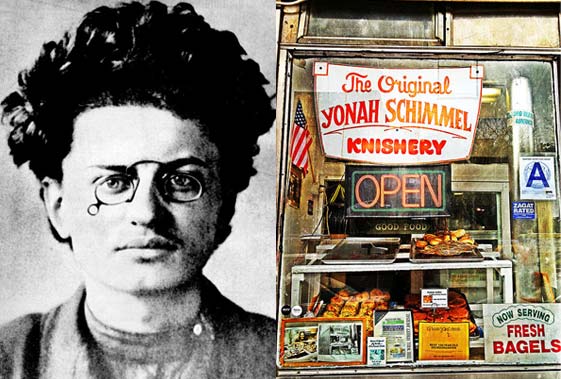 For three months in early 1917, the famous Marxist revolutionary Leon Trotsky was living in exile in The Bronx, writing for the local socialist rag Novy Mir and, of course, eating yogurt.

All of that is well and good, but the takeaway here is that you can eat literally the same yogurt that Trotsky ate. Seriously. All you have to do is go to New York City’s Lower East Side.

On Houston Street, between 1st and 2nd Avenues, sits the deceptively humble Yonah Schimmel’s Knishery. The shop, founded by Romanian immigrant Yonah Schimmel in 1910, still exists in its original location. It also continues to sell yogurt made from the very same culture that Schimmel imported from Romania, making it over one hundred years old.

It makes sense that Trotsky would have been a fan of the long-beloved treat. L. bulgaricus, the microbe found in the yogurt, was popular among Bulgarian peasants. In fact, the microbe was discovered by Jewish-Ukrainian Nobel laureate Elie Metchnikoff, who wanted to know why those same Bulgarian peasants lived so long. Turned out it was their robust love of yogurt, the lactic acid of which promotes healthy gut flora and combats toxic bacteria.

So next time you’re in NYC, order some of history’s finest yogurt. Support probiotics, support the peasantry.

An Israeli Film Fest in Your Home