If you think you know what Man Ray’s artworks symbolize, you’re probably wrong. A member of the Surrealist and Dadaist movements, Man Ray (1890-1976) was a proponent of art for art’s sake–he intended his work to be appreciated on its own merits, without reading in any meaning.

Man Ray was born Emmanuel Radnitzky in Philadelphia, the son of two Russian Jewish immigrants. While he never denied his Jewish identity, Man Ray strove to shed his roots, according to curator Mason Klein of last year’s Jewish Museum’s exhibit Alias Man Ray, the first comprehensive survey of the artist’s Jewish influences. In fact, Man Ray sort of reversed his parents’ immigration, leaving America and spending most of his career and life among the avant-garde artists of Paris. His autobiography also doesn’t mention his Jewishness. “It’s been elided completely,” Klein told the Jewish Week. “He only tells us about his artistic creations as if it was the only thing he wanted you to know about him.”

Still, Klein searches for hints of Jewishness throughout Man Ray’s work. Klein points out that Man Ray used sewing in his sculptures constantly, even where it was impractical or odd; this might be a reference to being a tailor–which was both his parents’ trade, as well as a traditional Jewish trade. Man Ray also photographed a series of famous non-Jewish artists, including Marcel Duchamp, dressed as traditional Jews.

Man Ray fled Paris, where he was living, just days before the Nazis invaded. Although his work continued to be as indecipherable as ever, after this event his pieces (such as “Glass Tears“*) reflected a new level of dissonance and tension. 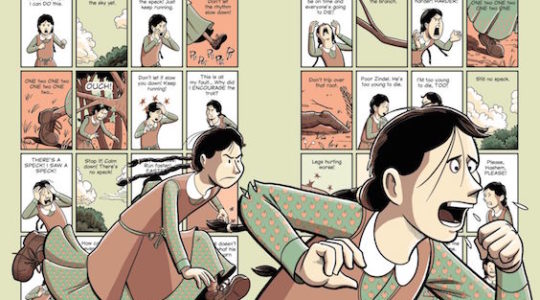