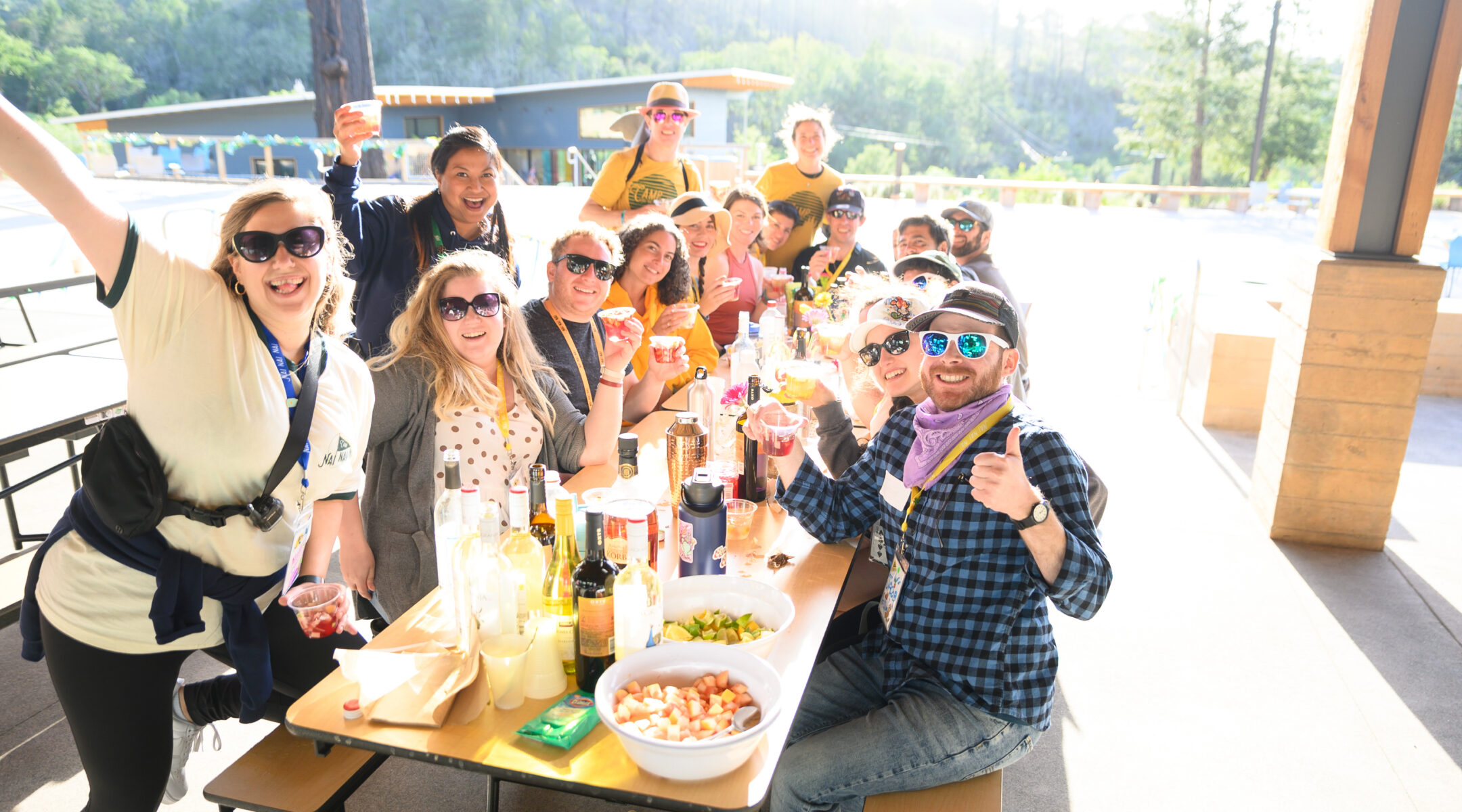 “What’s the first thing you think of when you hear the word ‘sex’?” Claire Perelman asks the men and women in their 20s and 30s seated around her, under a tent open on all sides – ​what’s known as the “Zen Zone” at Camp Nai Nai Nai.

“And what’s the first thing you think of when you hear ‘Jewish’?” she prompts after a round-robin of responses that range from the cringeworthy to the giggle-inducing.

That was the opening for “Kosher Kink,” a 75-minute session called a playshop that Perelman led as a camp specialist for the latest iteration of Camp Nai Nai Nai, a Jewish summer camp experience for adults that takes place over long weekends, mostly in the spring and summer.

At the most recent gathering, May 6-8 at Camp Newman in San Rafael, California, a half-dozen other playshops offered campers opportunities to relive their childhood camp experiences with games such as gaga, unleash their inner artist with arts-and-craft workshops, and explore difficult topics with their peers such as vulnerability.

Such was Shabbat morning at “Camp West” — the first West Coast camp event since August 2019. Nearly 80 people attended, coming from the Bay Area, Arizona and as far away as Canada and Brazil.

Camp Nai Nai Nai was started in 2017 by Moishe House, an organization that seeks to engage young Jews around the world in peer-led programs in community houses, retreats and more.

“There’s really nothing else like this for people in this age range,” said Greg Kellner, director of Camp Nai Nai Nai. “There was a gap for people between college and when they have kids, so camp and other Moishe House programs really engage people in their 20s and 30s.”

The camp provides a unique way to connect relatively unaffiliated Jews in that age group to each other and to Jewish life, as well as a fun venue for them to “disconnect from the daily hustle and bustle of life,” said Ali Gugerty, Moishe House’s director of immersive experiences.

At Camp Newman, it doesn’t hurt that there’s virtually no cell service and the wifi is for staff only, for camp purposes.

Nai Nai Nai’s next camp weekend will be held on Sept. 2-5 in Pennsylvania, and the organization will be staging its first-ever Midwest camp experience on Oct. 28-30 in the Chicago area.

For many participants, Camp Nai is an opportunity to relive their childhood camp memories.

Moishe House “has done such a good job making us feel like kids here — it’s not cheesy and no one thinks it’s weird,” said Jenna Feldman as she waited at the base of a multistory climbing tower.

Feldman, who is involved with a local Moishe House in San Francisco, grew up attending Camp Newman, which is affiliated with the Union for Reform Judaism. She now works as a customer advocate in the technology industry.

David Matten, who lives in the South Bay area in Northern California, decided just days before the weekend to attend because so many of his friends were going. A longtime camp counselor, it felt good to be a camper again, he noted.

“I can connect with new people and spend time with friends,” Matten said.

Especially after two years of pandemic isolation, people really want to reconnect outside of the daily grind in a fun, easy way, Moishe House staff said. Camp Nai experiences often serve as a gateway to deeper involvement in camp, in Moishe House, and in Jewish life, they noted.

The enthusiasm was palpable among the 25-person staff, who welcomed campers upon arrival with screams and cheers. 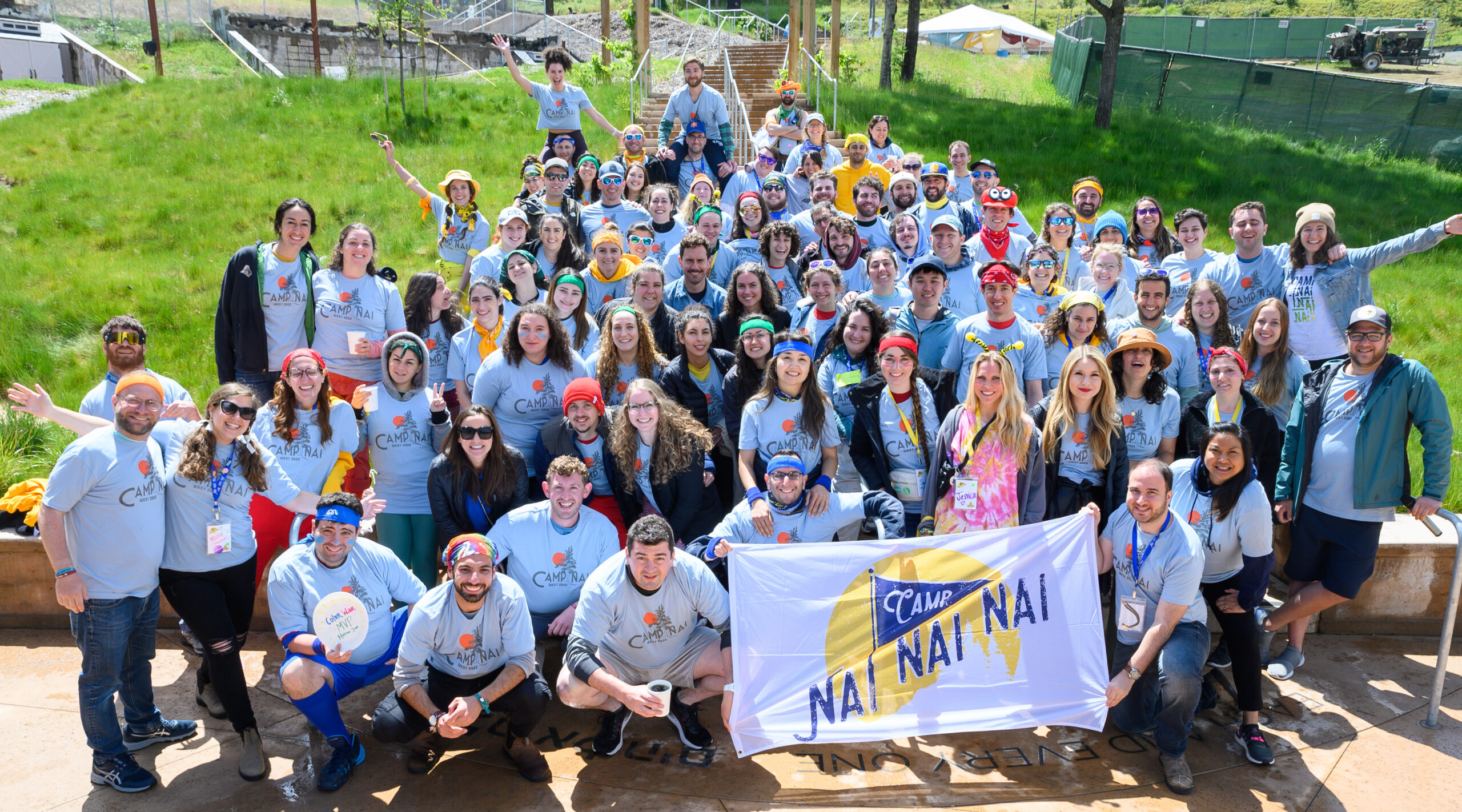 From the start, there was a clear focus on inclusion throughout the weekend. Friday night opened with a traditional Shabbat service as well as a more musical service infused with singing and guitar. ​In addition, there was also an early morning Saturday service, meditative yoga, a Shabbat hike ​and a text-based Torah study.

Aaron Malki, who works in real estate in San Francisco, went to the song-led service. “I enjoy embracing a Jewish community space like this — nostalgic and warm,” he said.

Saturday activities ranged from the craft-oriented and reflective, such as mezuzah-making, tie-dye, and “Believe: The Torah of Ted Lasso,” to the physically active, including slip’n’slide kickball, archery, Latin Israeli dance and yoga.

Even during the Saturday night “All-I-Days Dance Party” that was scheduled to go until 1 A.M., there was a quiet corner to relax in, a silent disco, and stations to make your own bow tie (in honor of National Bow Tie Day), paper plane, or ice cream sundae.​

“We’re trying to create different spaces so people can feel comfortable here,” Kurakin said. “It doesn’t matter who you are, what your background is, what your job is — you are welcome here.”

For participants who might have been intimidated by the social component of the camp experience after more than two years of social distancing and isolation, Kellner said camp provides a safe environment.

“After the pandemic, people don’t realize they are having some social anxiety, so camp is a great way to get back into the swing of things,” Kellner said. “We know people are coming with different comfort levels.”

Josh Schwartz, a camp counselor returning for his third Camp Nai Nai Nai experience, said, “What Moishe House does so well is being inclusive.” Describing the Saturday night dance party as an “adult bar mitzvah,” he noted, “If you don’t want to be on the dance floor, you can be at the pickle-making station.”

A cybersecurity consultant by day and Jewish community organizer by night, Schwartz is a resident of the NoMa Moishe House in Washington, D.C. and will be the head counselor at the next camp, in Pennsylvania over Labor Day weekend. When his colleagues asked him how he stays so energized, he said, “I always have energy because my battery is recharged at camp.”

During the two-hour block of free play on Saturday afternoon, there were options for everyone: People napped in the Zen Zone, practiced archery, ​participated in a local wine tasting, or took a walk around Camp Newman’s 500-acre grounds.

Sunday concluded with an intensive color war, offering one last chance for campers to let loose and play like children again.

Kellner said he considers it a win if someone leaves camp just with the practice of saying the Hamotzi blessing over bread a few times a week or adopting a Jewish practice that’s new to their life. They may even go as far as to marry a fellow camper, as former camper Abby Eisen did this past April, exchanging vows with the partner she first met at camp several years prior. In true Camp Nai fashion, Abby returned to San Rafael as staff.

“Getting out of their comfort zones and finding themselves at camp, where there is such a sense of community and unity, is so powerful,” Kurakin said. “I call it people’s ‘happy place.’” 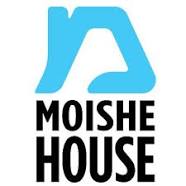 This article was sponsored by and produced in partnership with Moishe House, which creates meaningful & welcoming Jewish communities around the world. This article was produced by JTA’s native content team.