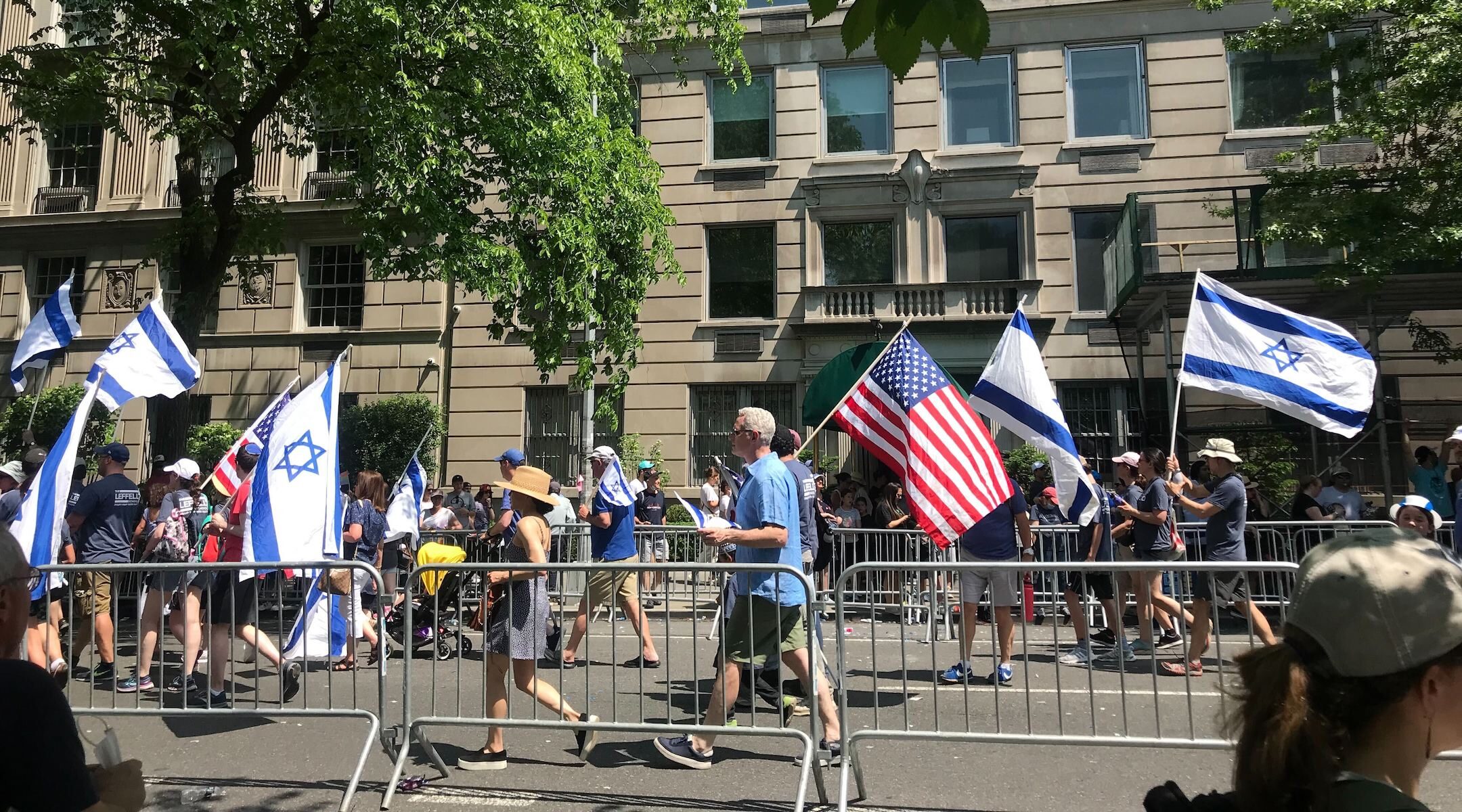 More than 40,000 people marched in the parade, according to the JCRC. The parade was held on May 22nd for the first time in three years. This year’s theme was “Kulanu B’yachad” — “All together again.” (Julia Gergely)
Advertisement

(New York Jewish Week) — Thousands gathered on Fifth Avenue in Manhattan on Sunday, May 22, to show their support for Israel at the New York City’s annual Celebrate Israel Parade.

The parade, which touts itself as the world’s largest expression of solidarity with the Jewish state outside of Israel, has been held every year on the first Sunday in June since 1965, save 2020 and 2021 due to the pandemic. This year, events were pushed up a few weeks in order to not conflict with Shavuot, which begins this year on the evening of Saturday, June 4.

The theme of this year’s parade, which was organized by the Jewish Community Relations Council of New York, was “Together Again.” “We saw an incredible outpouring of love and support for Israel along Fifth Avenue,” said CEO Gideon Taylor of the 40,000 marchers. “Jews of all denominations, as well as people from different religious faiths and backgrounds, stood united, bringing a wider New York community together than ever before in the largest Jewish diaspora community in the world. That’s what the JCRC-NY Celebrate Israel Parade is all about.”

Reporters Julia Gergely and Jackie Hajdenberg set out to capture the energy of the parade, which included Zionist youth groups, Jewish day schools and pro-Palestinian protestors. Though it was unseasonably warm, it was clear that many in and along the route enjoyed celebrating Israel on a sunny day in the city with family and friends. 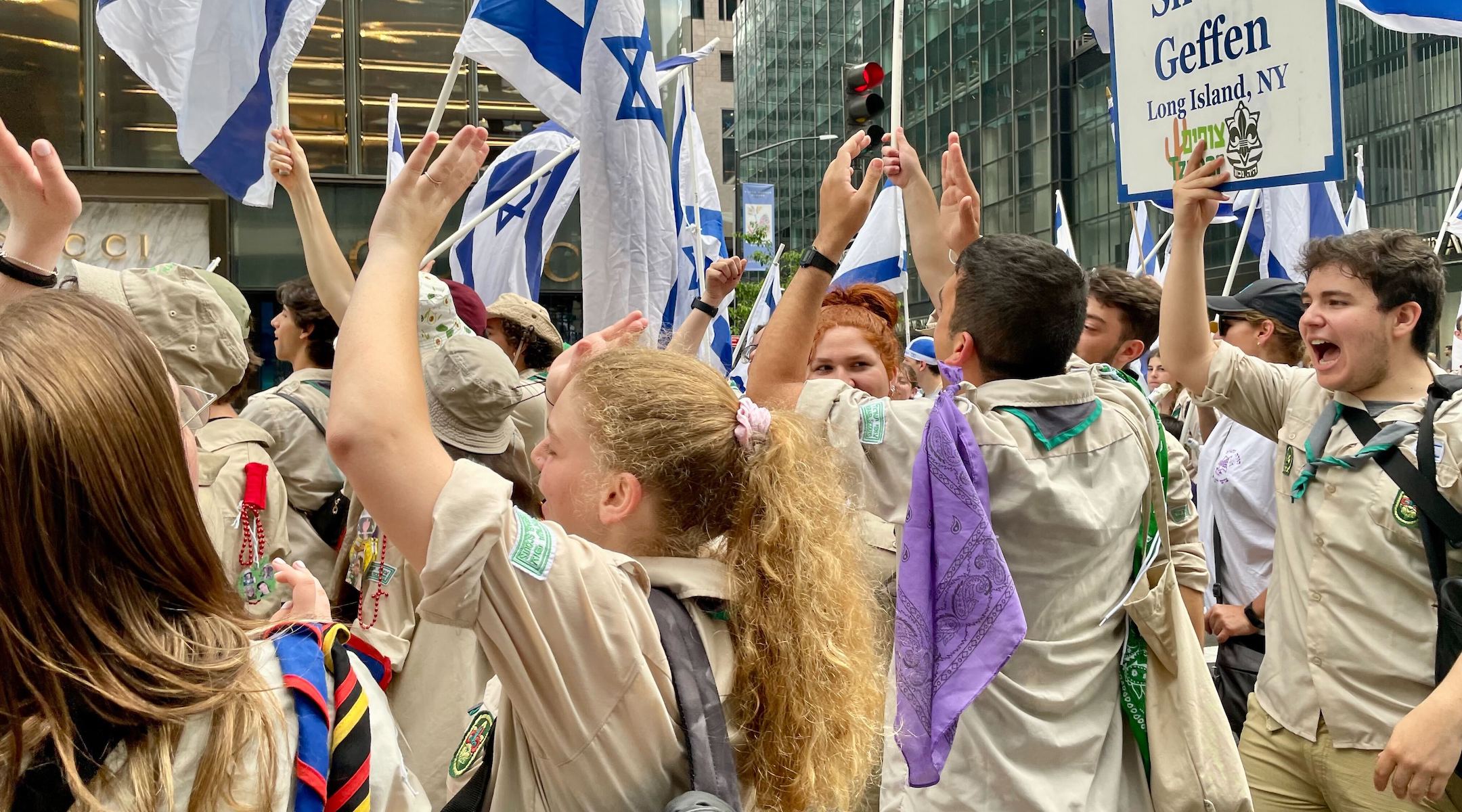 Shevet Gefen, the Long Island chapter of a Tzofim Israeli Scouts, a Zionist youth scouts movement, brought some serious energy to Fifth Avenue. “For our Long Island Shevet and the Israeli Scouts in the U.S., it is an energizing community-building event that brings together our shevatim (chapters) from the Northeast. Rebuilding our local community after the pandemic has not been easy, and this year’s parade motto has really resonated with our community,” Eytan Behiri, chapter chair, told the New York Jewish Week. (Jackie Hajdenberg) 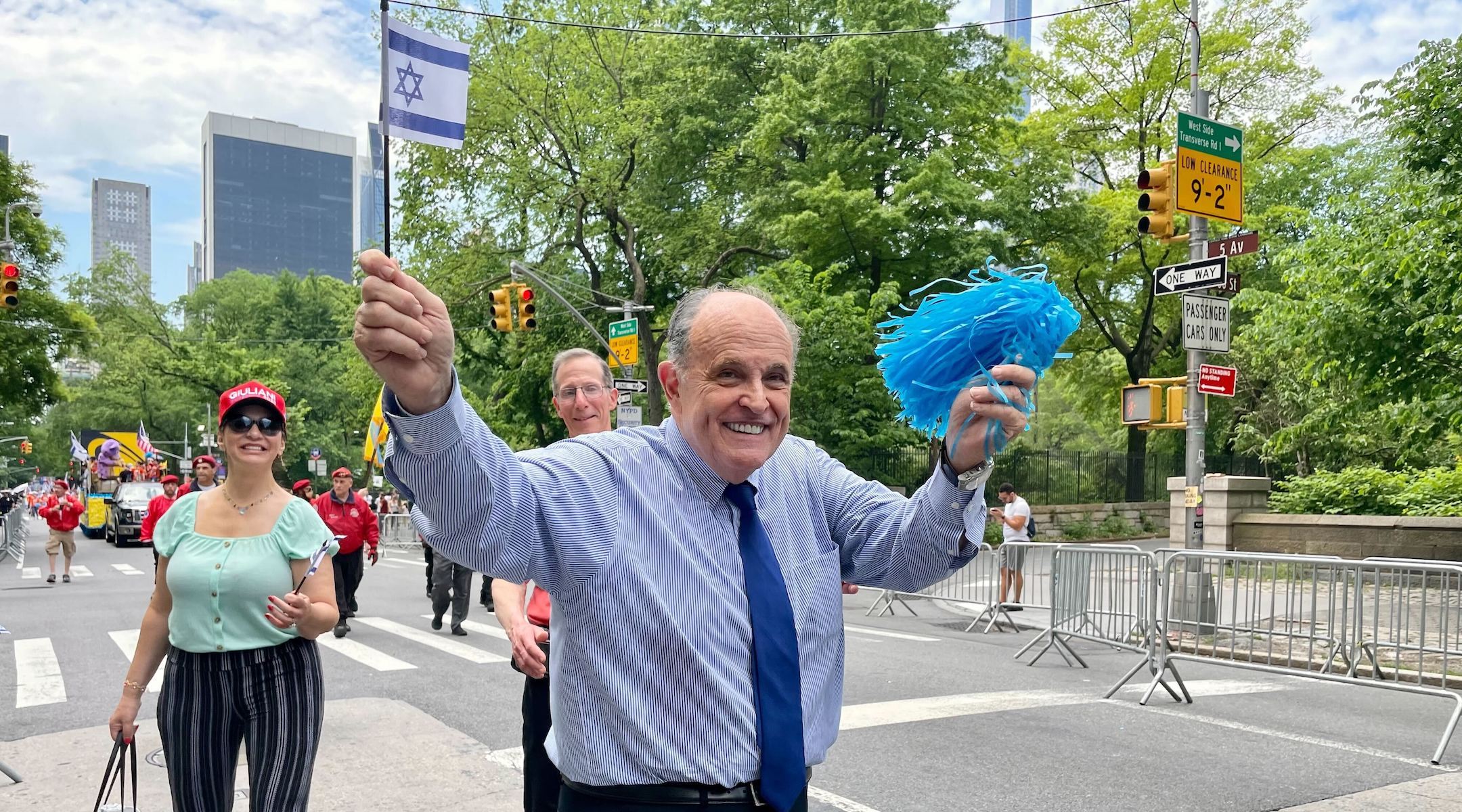 Rudy Giuliani, the mayor of New York from 1994 through 2001 and ex-lawyer for former President Donald Trump, marched the parade route with his son, Andrew, who is running as a Republican to become New York’s next governor. In a video captured by Forward reporter Jacob Kornbluh, the senior Giuliani was caught on video erupting at a heckler in the crowd. “You are a jackass… You are a brainwashed asshole… you are probably as demented as Biden,” he said. (Jackie Hajdenberg) 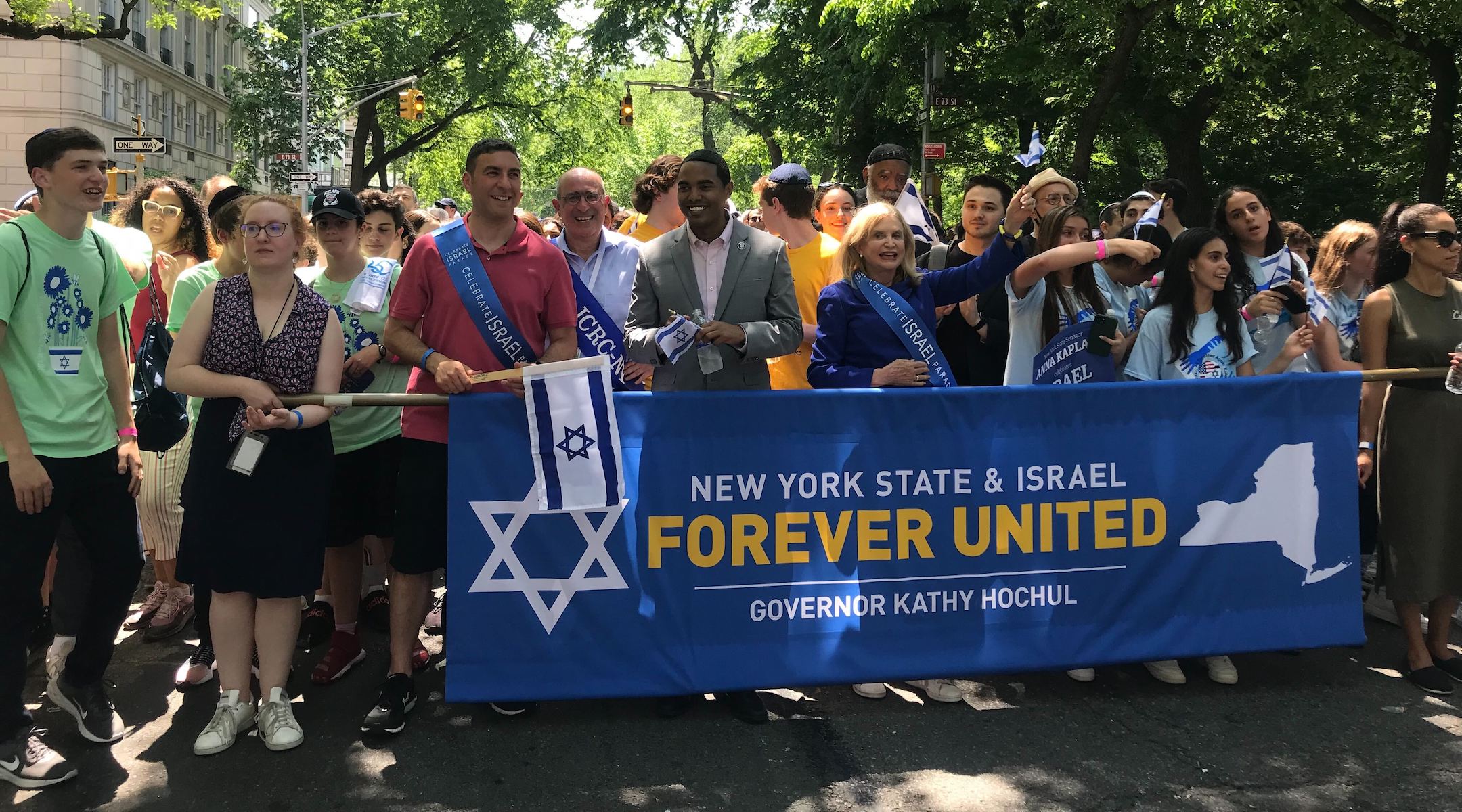 The parade was joined by several politicians, including Gov. Kathy Hochul. Among the pols pictured here are City Councilmember Eric Dinowitz, chair of the Jewish Caucus, and U.S. House Reps Richie Torres and Carolyn Maloney, whose districts cover parts of Manhattan. (Julia Gergely) 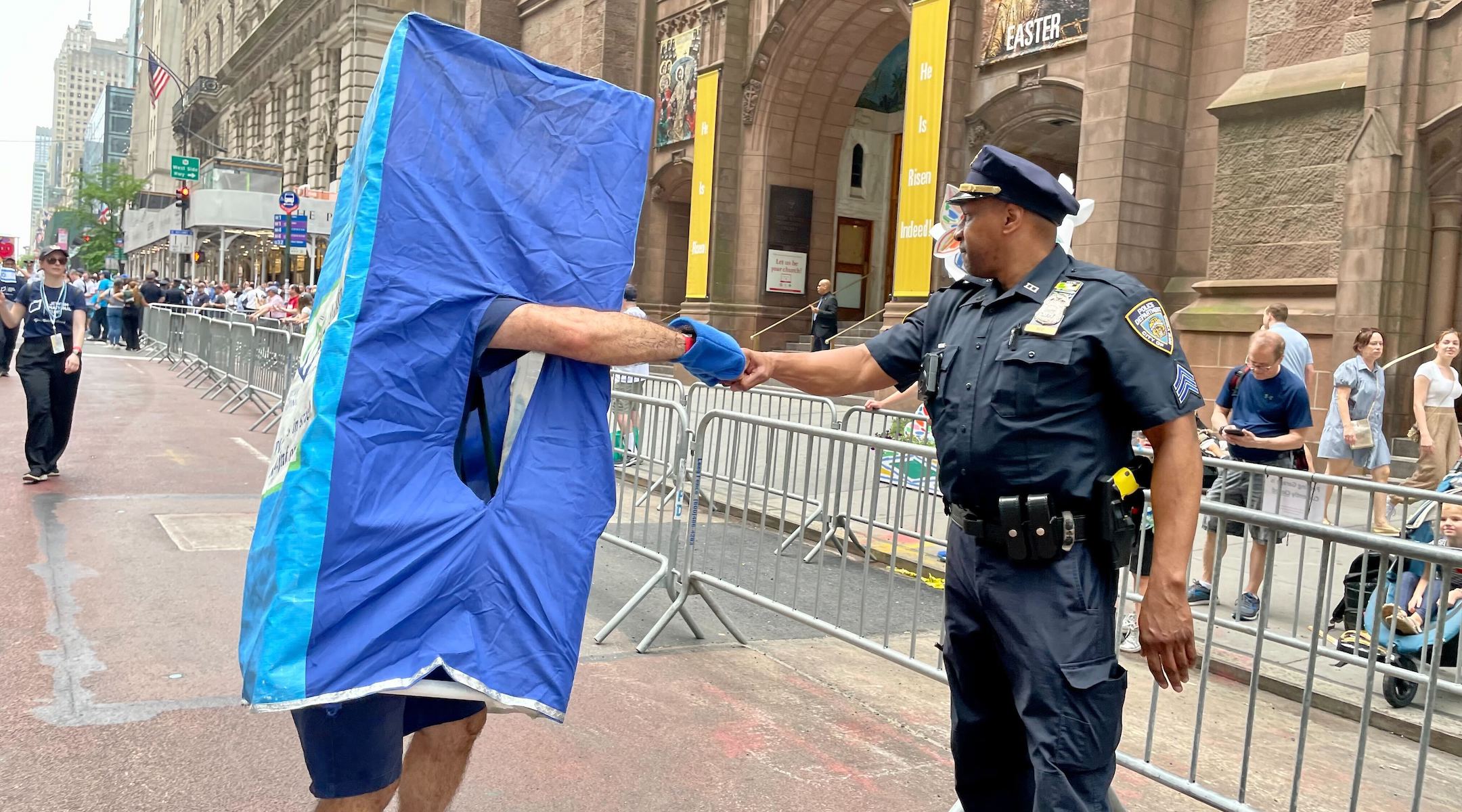 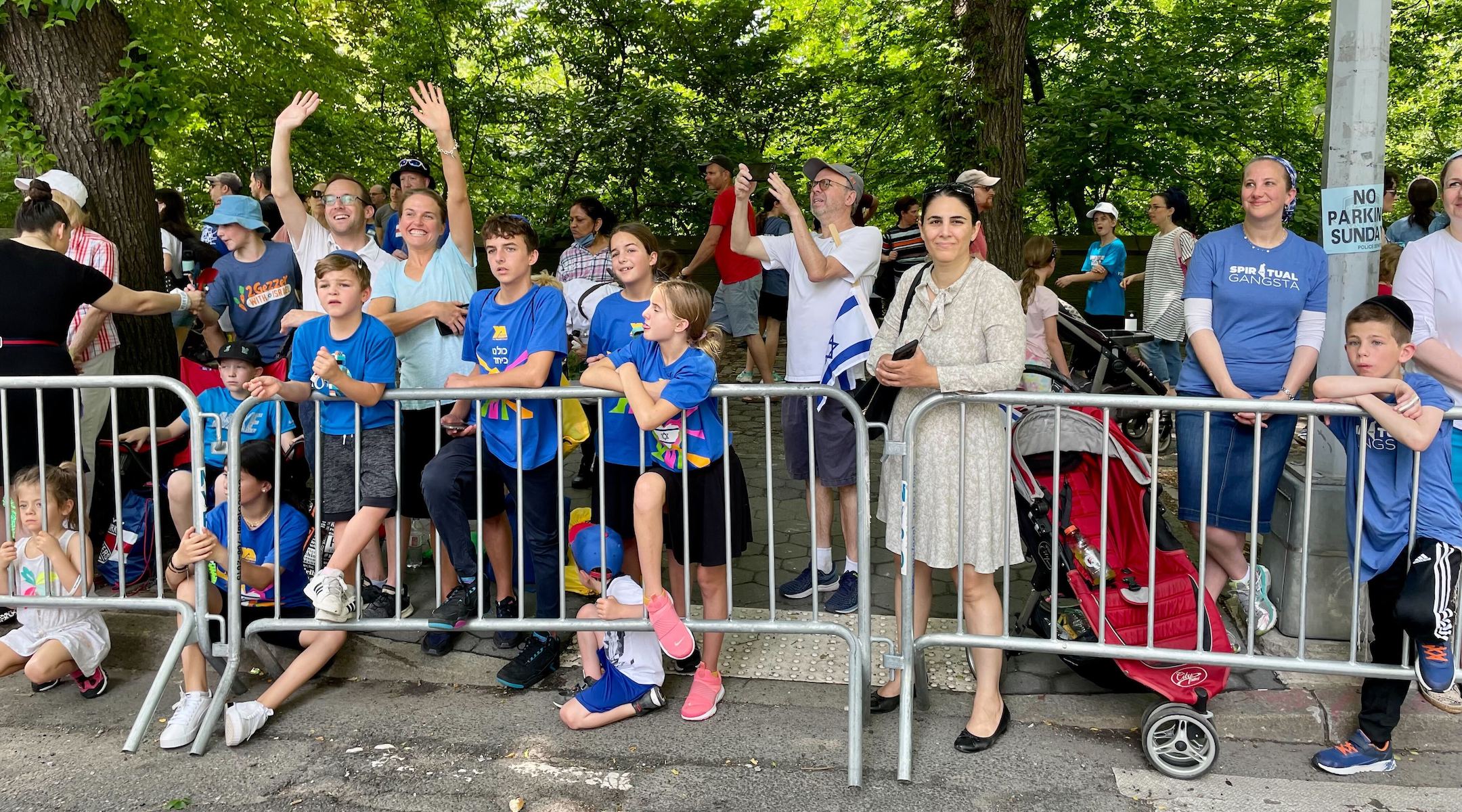 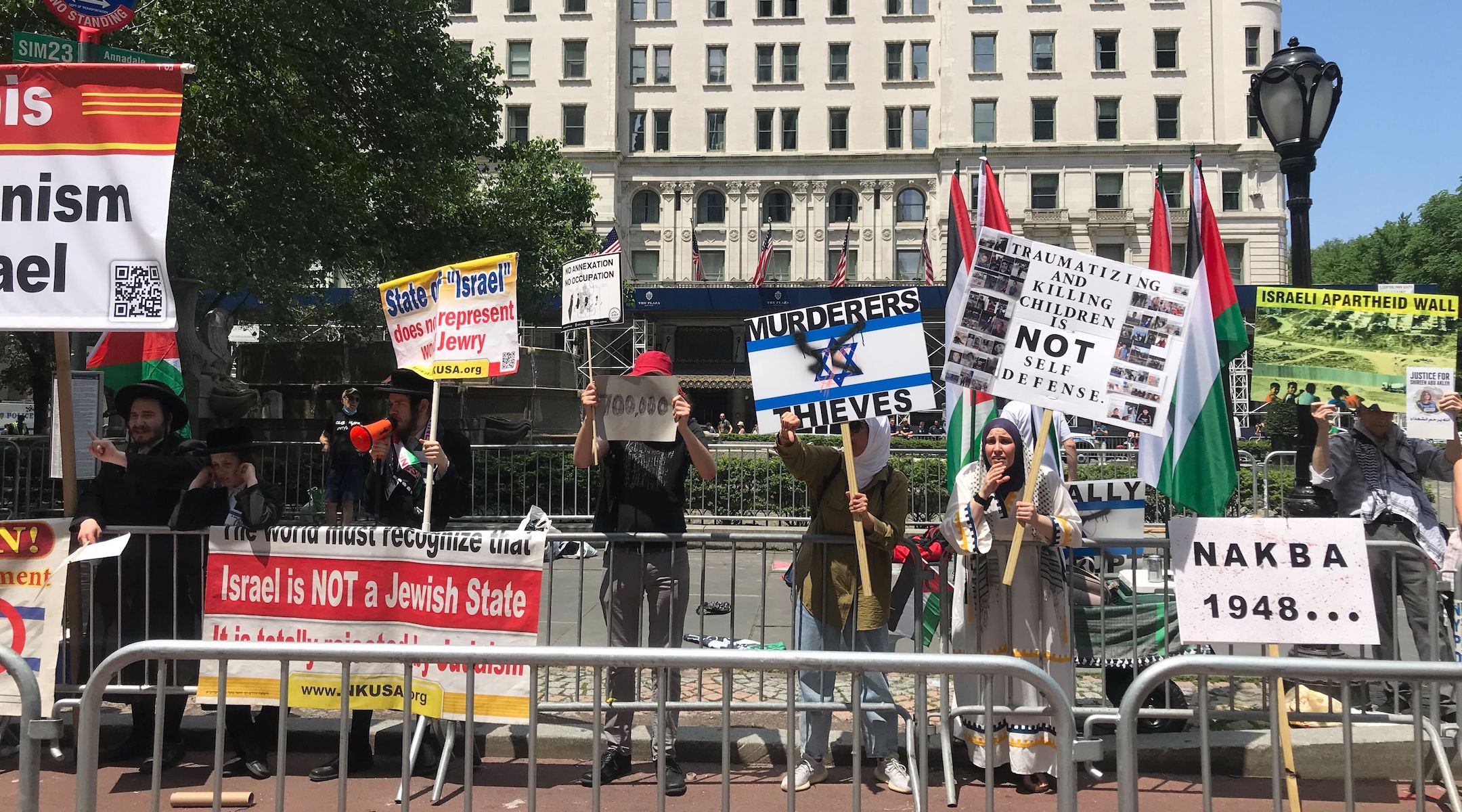 A small but loud group of anti-Israel protestors gathered along the parade route near the corner of 59th Street and 5th Avenue. The protestors included Palestinians and members of Neturei Karta, a haredi Orthodox sect that opposes Zionism and advocates for the peaceful dissolution of the State of Israel. (Julia Gergely) 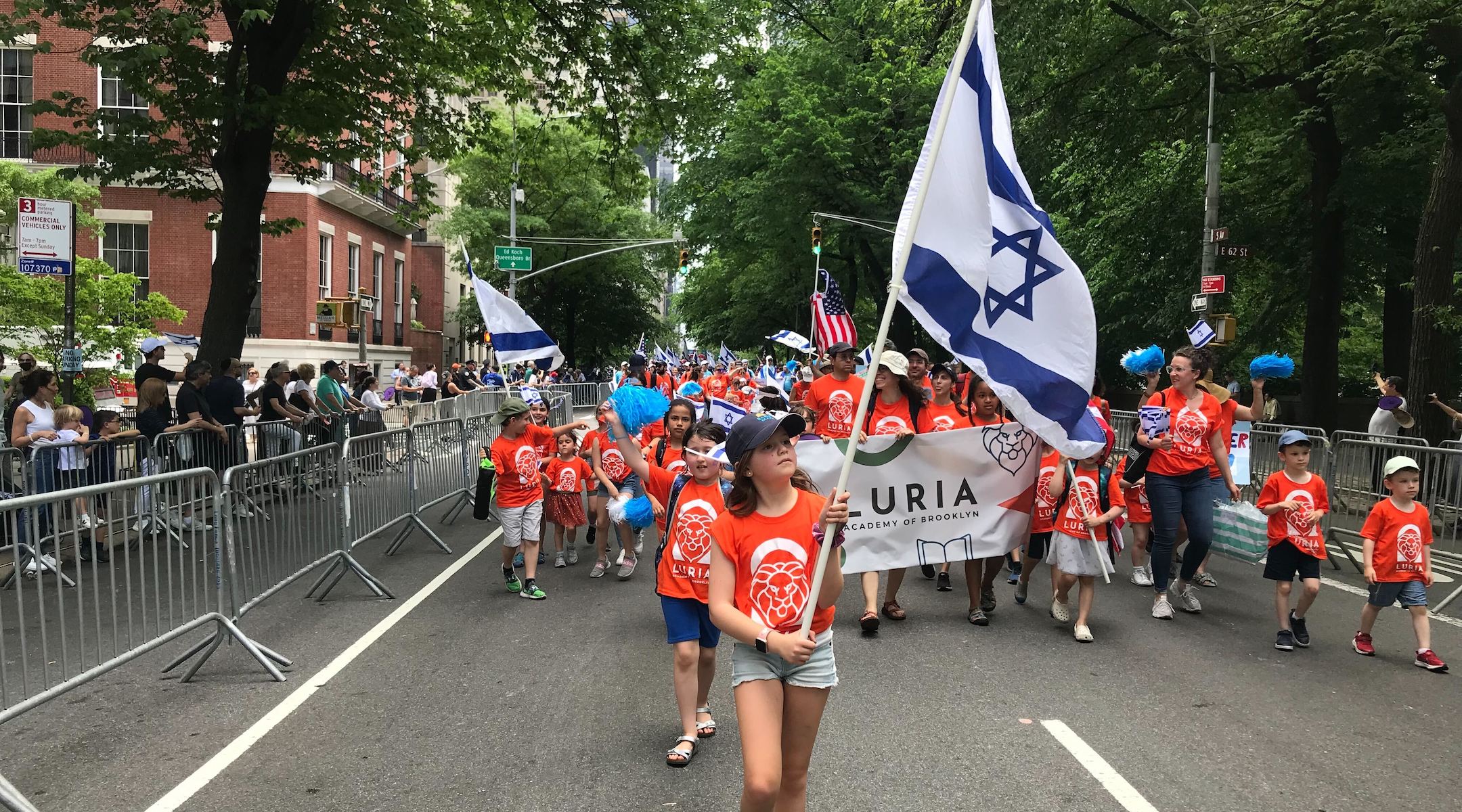 A student from Brooklyn’s Luria Academy leads the school’s group in the parade by holding a large Israeli flag. Nearly every Jewish day school across New York City, Long Island, Westchester and New Jersey participated in the parade, with thousands of students singing Hebrew and Israeli songs and waving Israeli flags along the route. “This was our first time marching and it was a privilege for Luria Academy to join with the larger Jewish community in celebration of Israel,” head of school Amanda Pogany told the New York Jewish Week. (Julia Gergely) 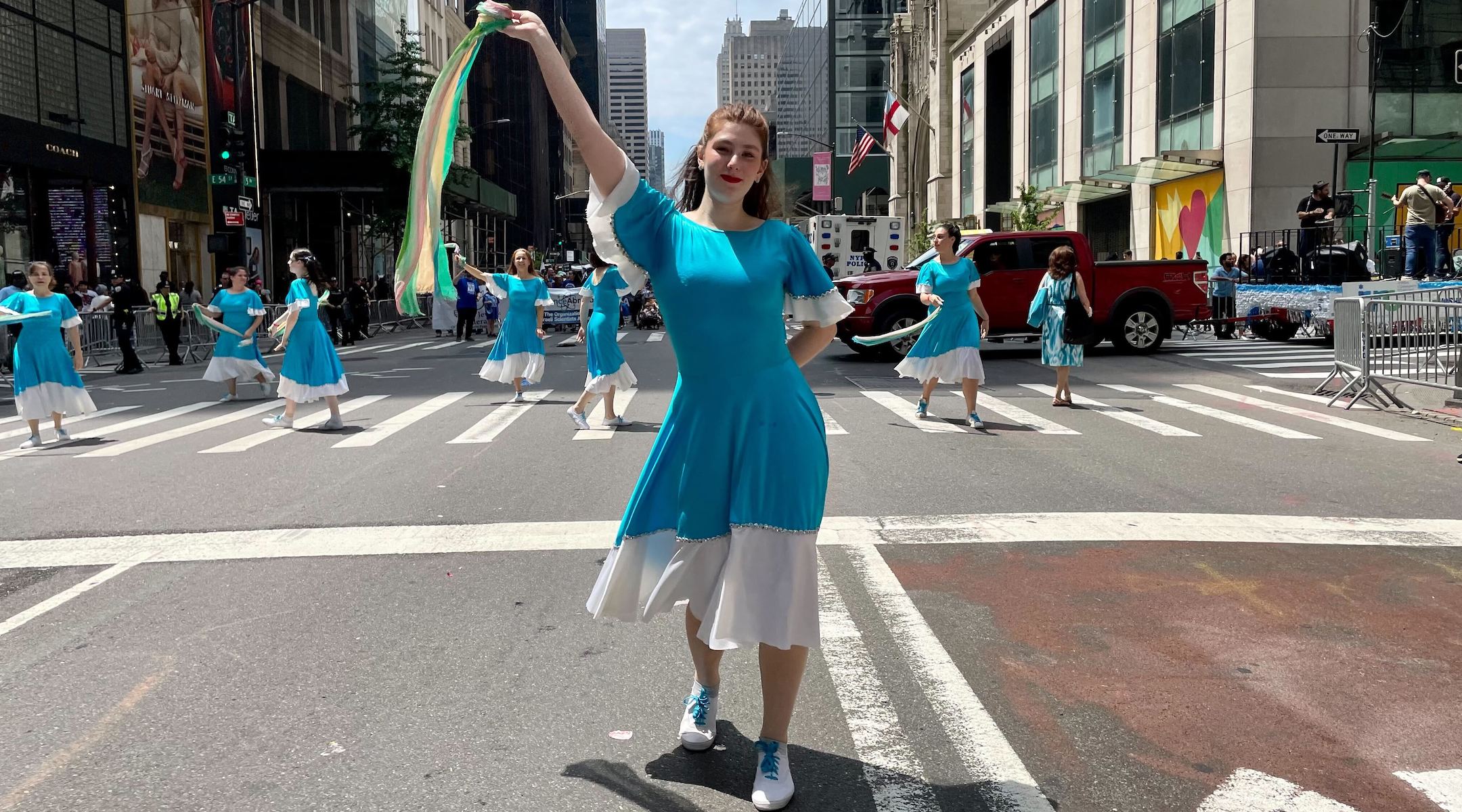 Hillit Avnon-Klein, a dancer with the Parparim Ensemble, an Israeli dance group, came to New York for her second parade. “It was a wonderful welcome back to the pumping New York. I definitely do think that it was a little quieter and less crowded than usual,” she said. Still, she felt that “the spirit of the Jews is alive. We’ll make it loud and proud and make it known to the world that we are still here and we are not going anywhere.” (Jackie Hajdenberg) 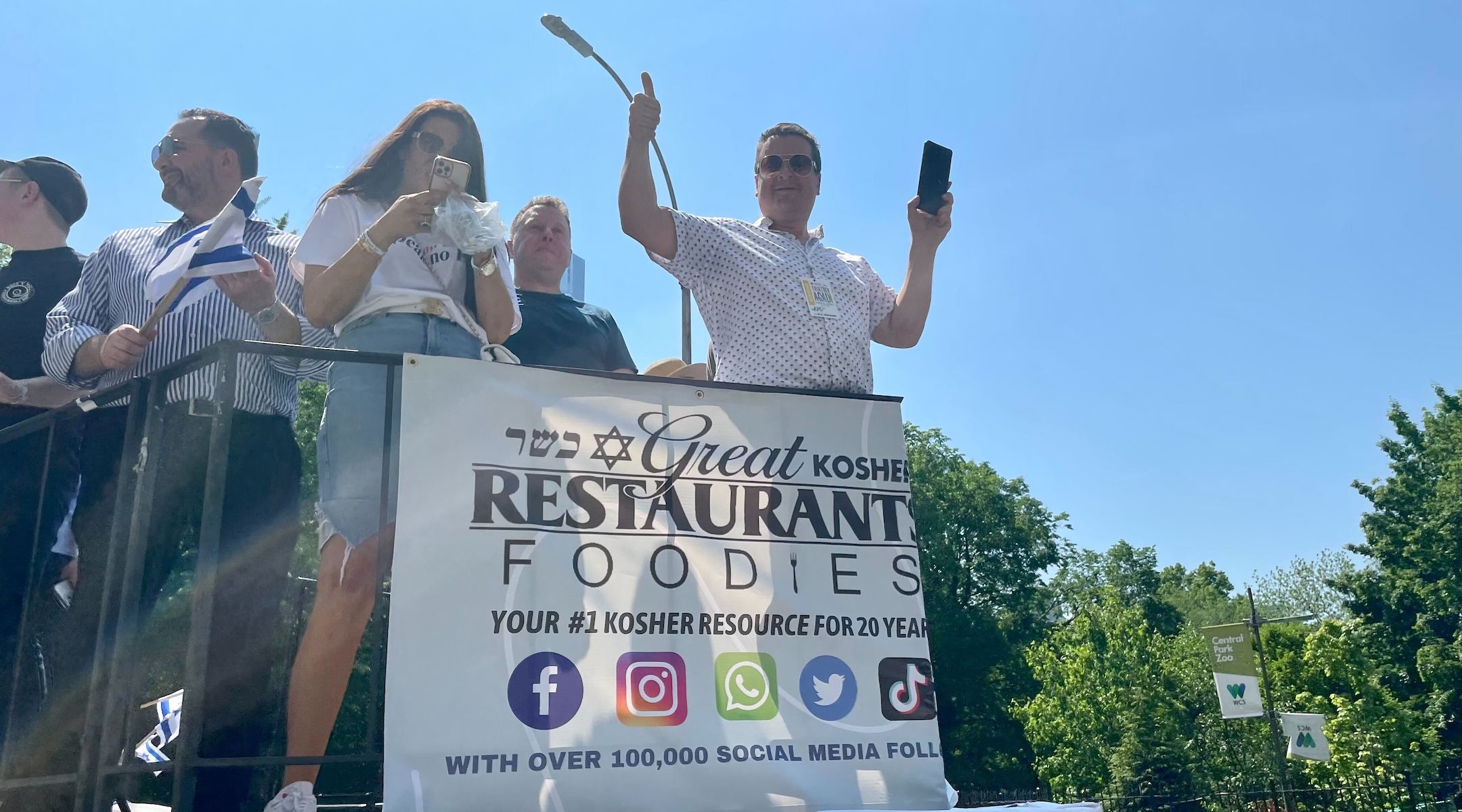 Elan Kornblum, founder of the Great Kosher Restaurant Foodies Facebook group and publisher of Great Kosher Restaurants magazine, sponsored a float at the parade, which is something he has done for the last several years. Kornblum, calling the parade “unlike anything else,” has participated for more than 35 years. “There is nothing like turning on Fifth Avenue, seeing a sea of blue and white colors, which beautifully matches the sky. To see supporters on the left and right of you showing their support, love and pride for Israel is inspiring and hopeful. Now more than ever, we need to show power in numbers,” he told the New York Jewish Week. (Jackie Hajdenberg) 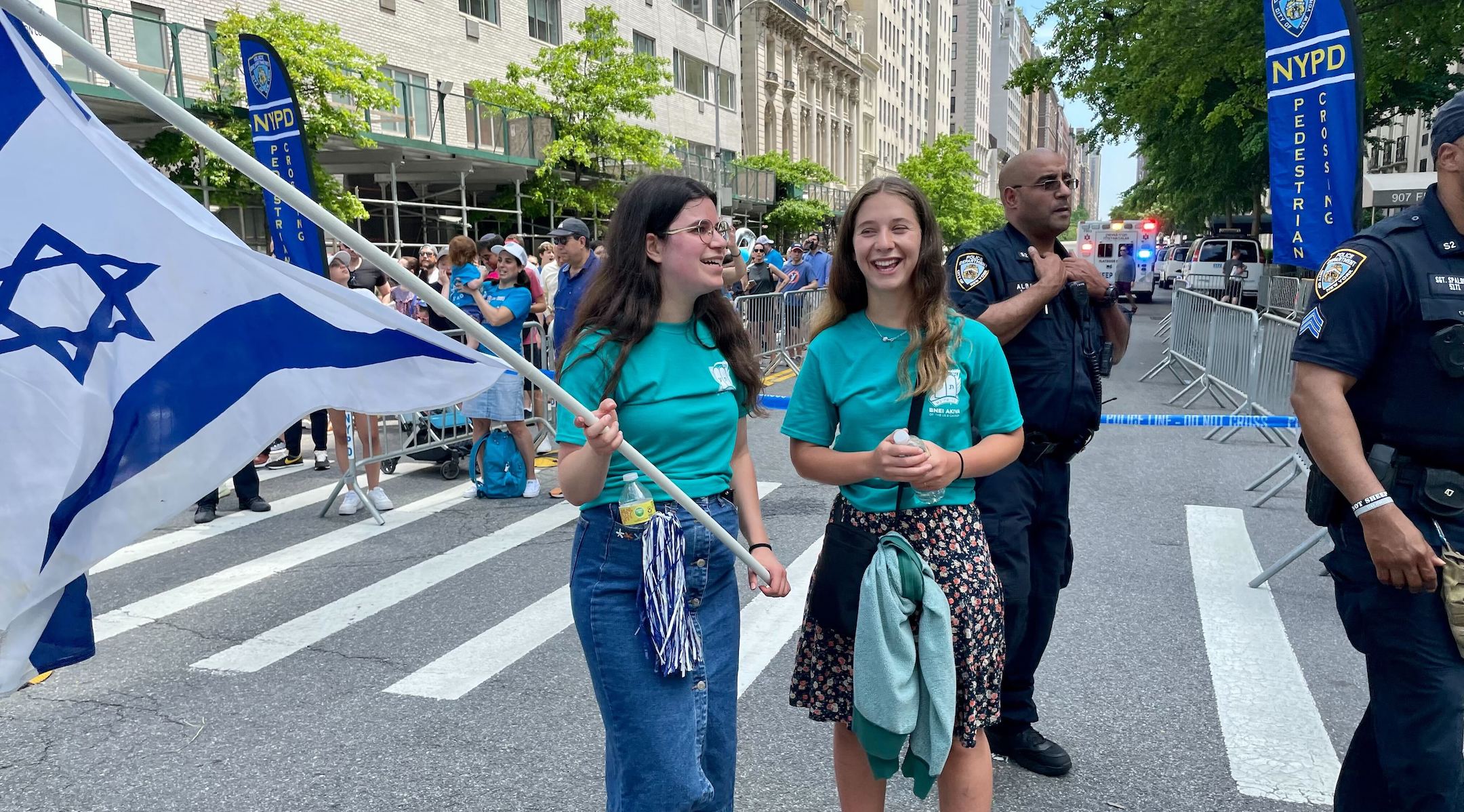 Two girls from B’nei Akiva, an international Zionist youth movement, smile at the end of the parade route. (Jackie Hajdenberg) 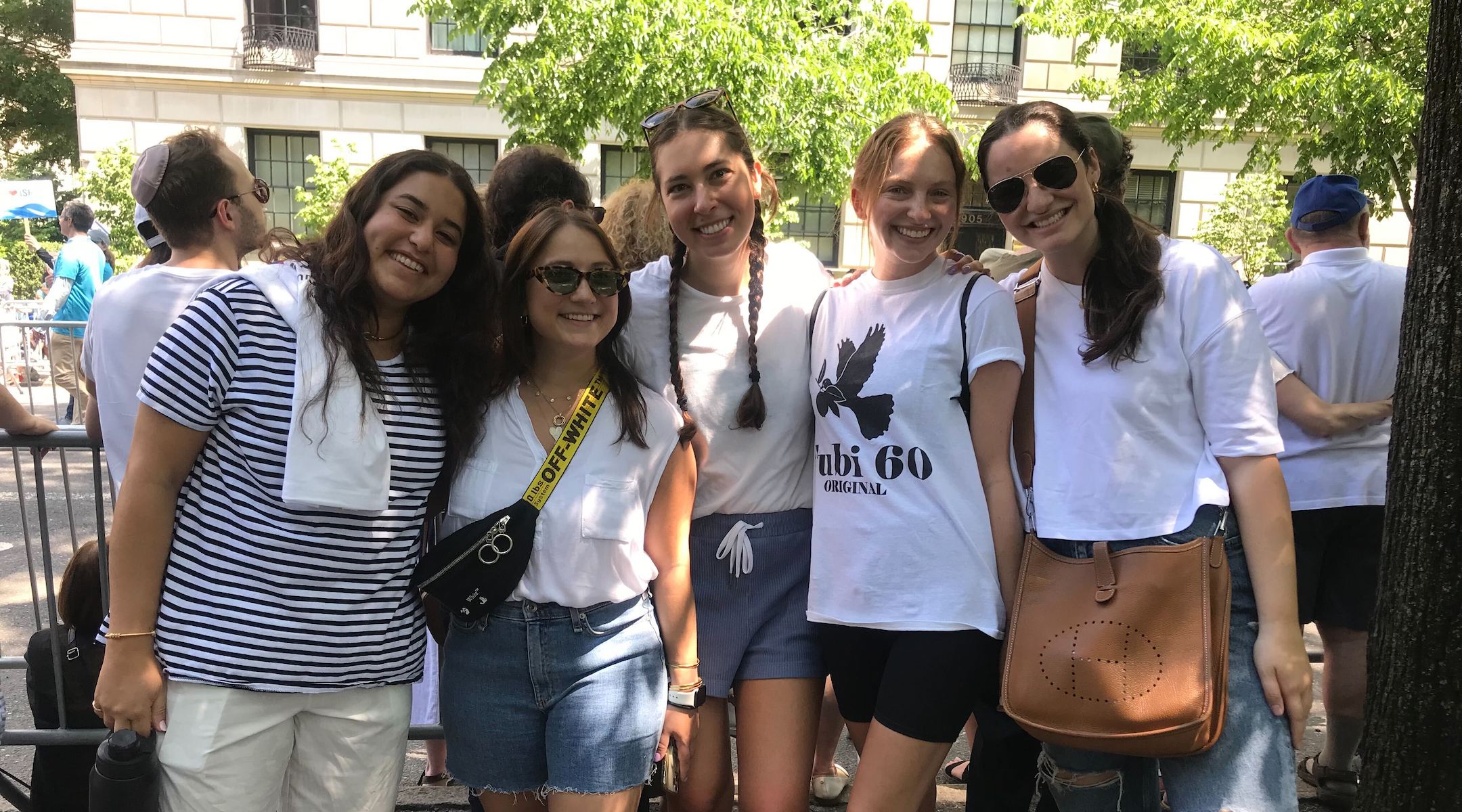 A group of friends came to watch the parade together. Samantha Bryk, second from the left, said her favorite part was getting to celebrate Israel as a community. Growing up, members of the group participated in the parade every year as part of the Ramaz School delegation. (Julia Gergely) 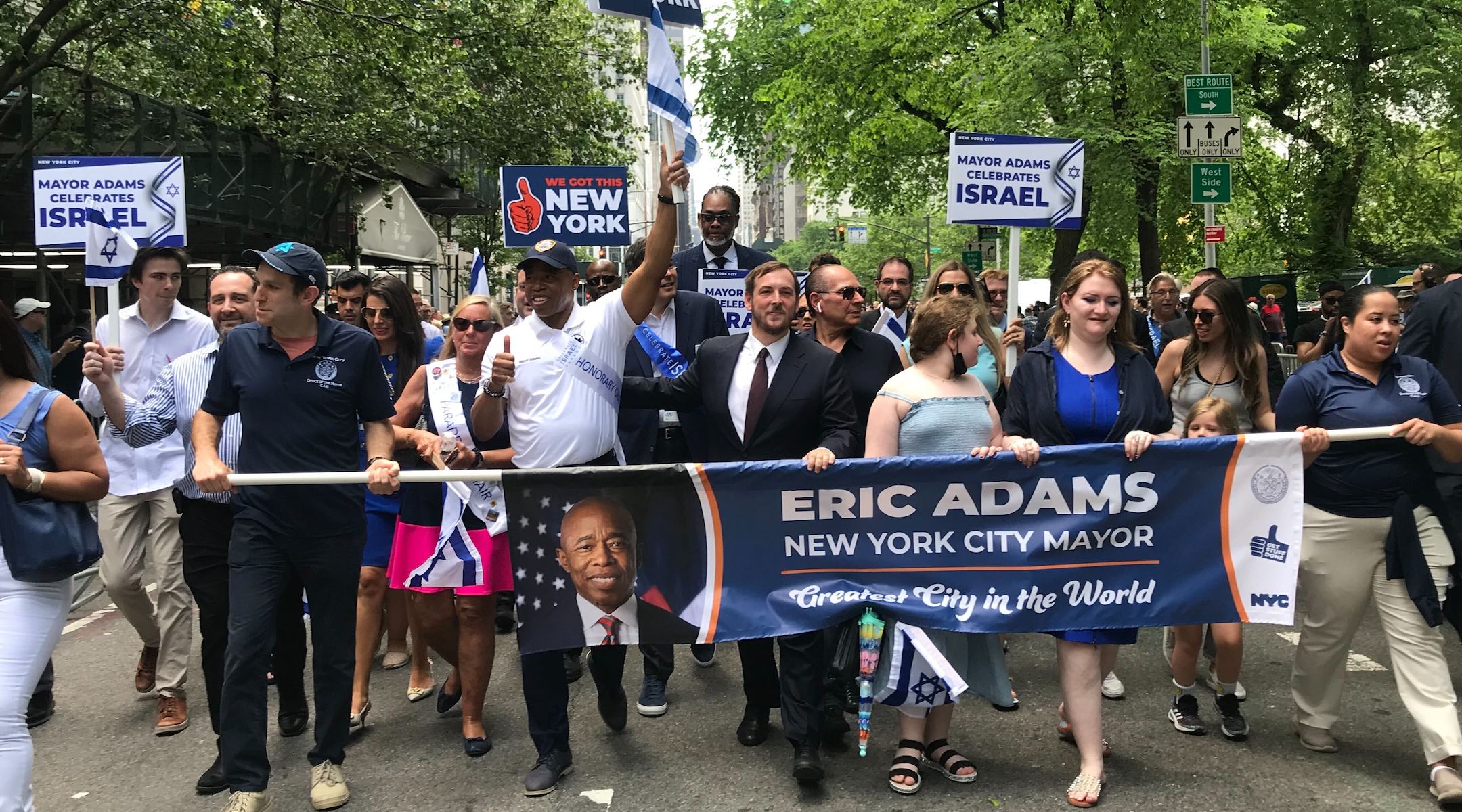 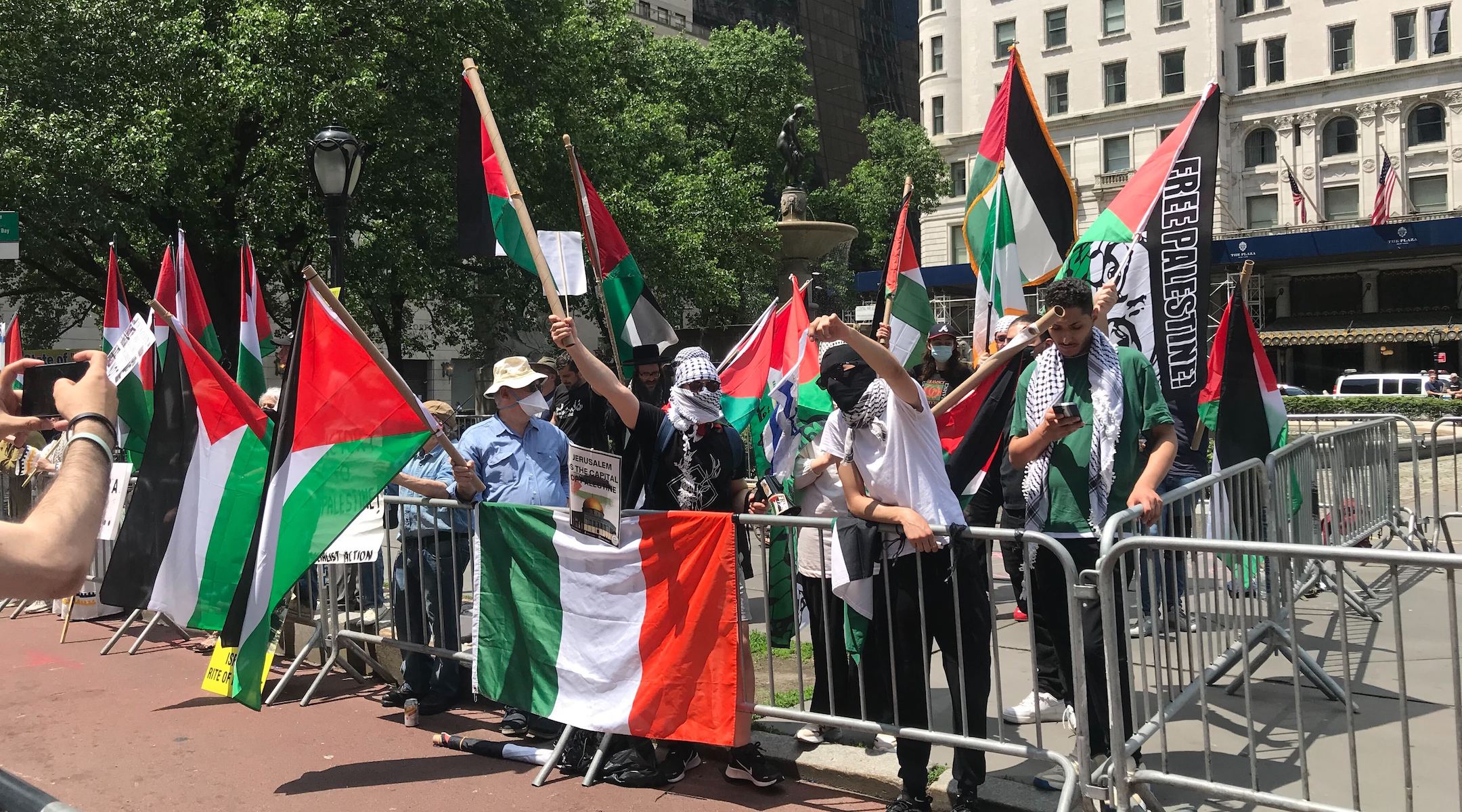 A group of protestors at the parade could be seen burning a small Israeli flag as they waved large Palestinian flags and held signs such as the one pictured, saying, “Jerusalem is the capital of Palestine.” Some members of the parade route, separated by metal barriers, were heard yelling “Terrorists!” at the protestors. (Julia Gergely) 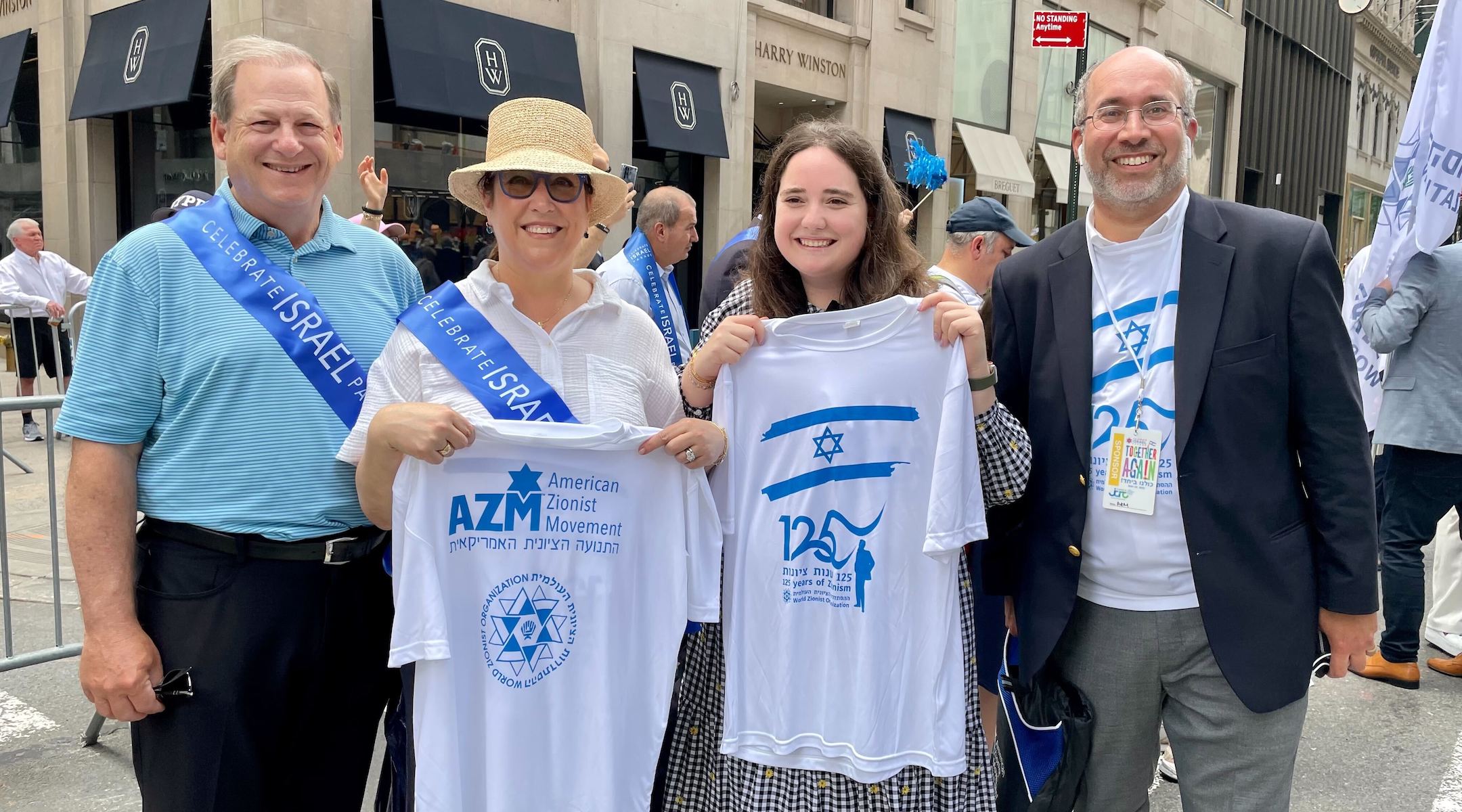 Michael Laufer, Debbie Isaac, daughter Arielle Isaac and Herbert Block, from the American Zionist Movement. Debbie Isaac is the first woman president of the organization. “It was exciting to be back after so many years. The parade is a New York staple and it’s great seeing so many people turn out to support Israel again,” said Arielle Isaac, adding that her family has been attending the parade for close to 40 years. (Jackie Hajdenberg) 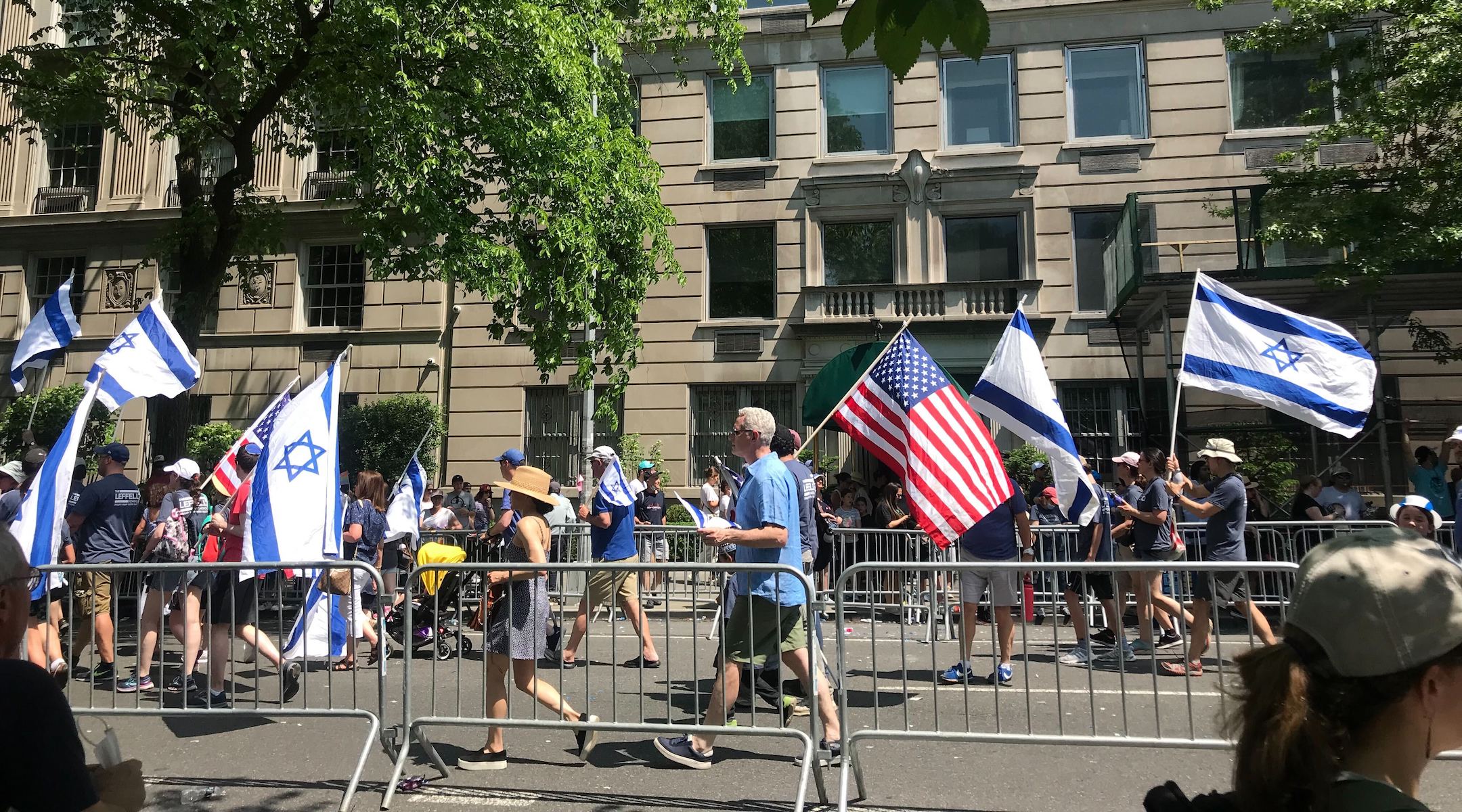 More than 40,000 people marched in the parade, according to the JCRC. This year’s theme was “Kulanu B’yachad” — “All together again.” (Julia Gergely) 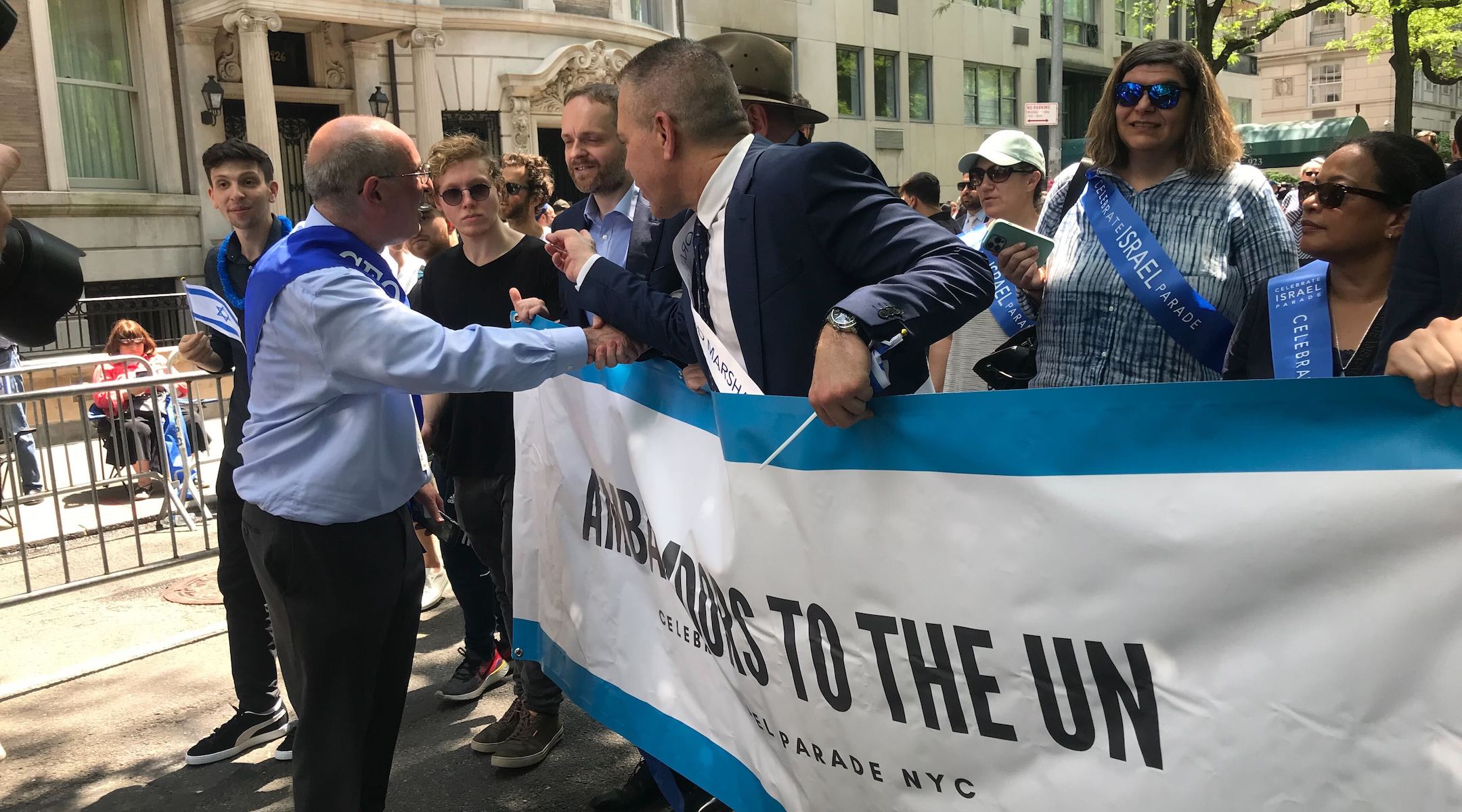 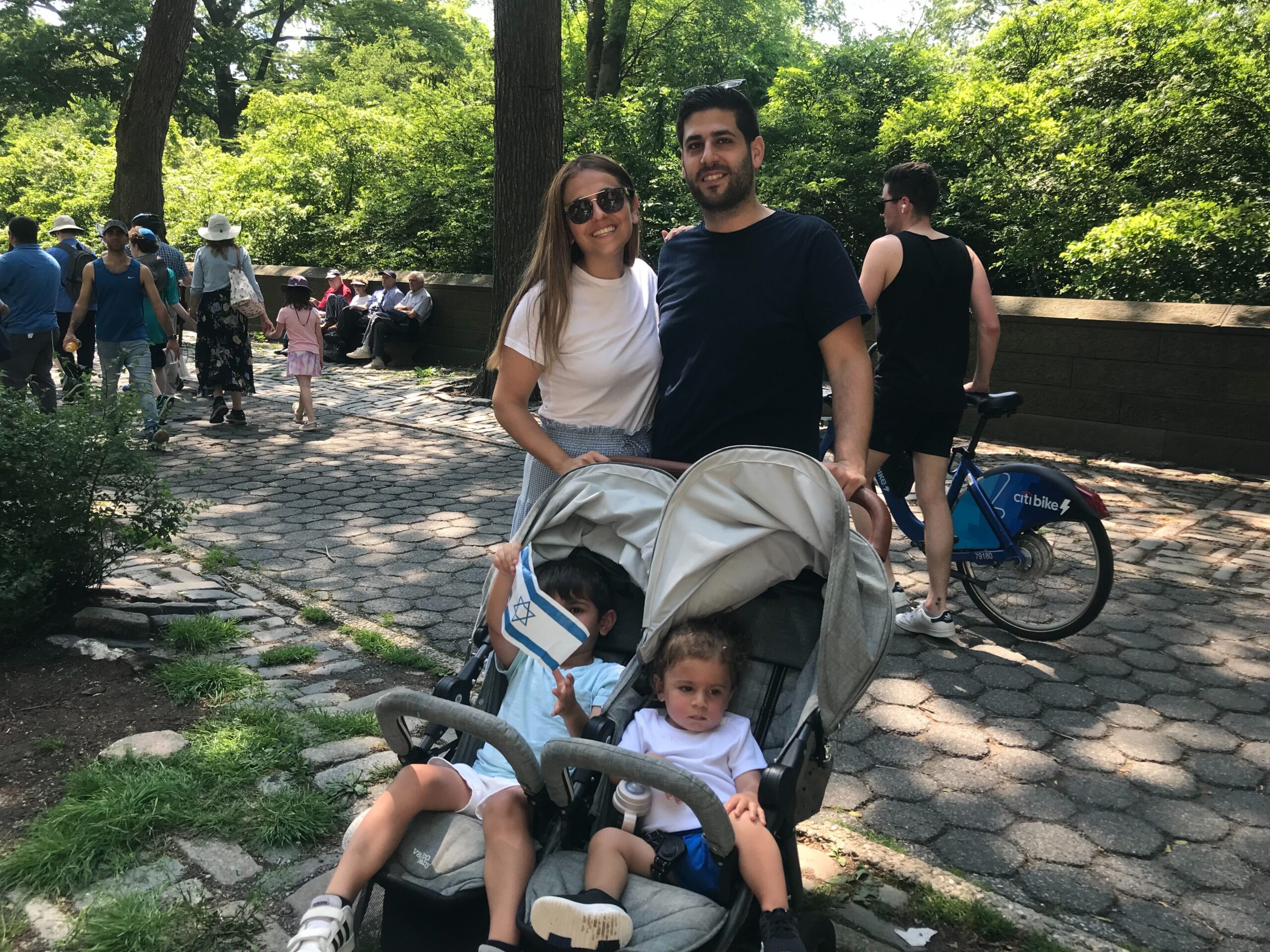 A family in the crowd brought their kids to their first parade to enjoy the sunny day and celebrations. (Julia Gergely)