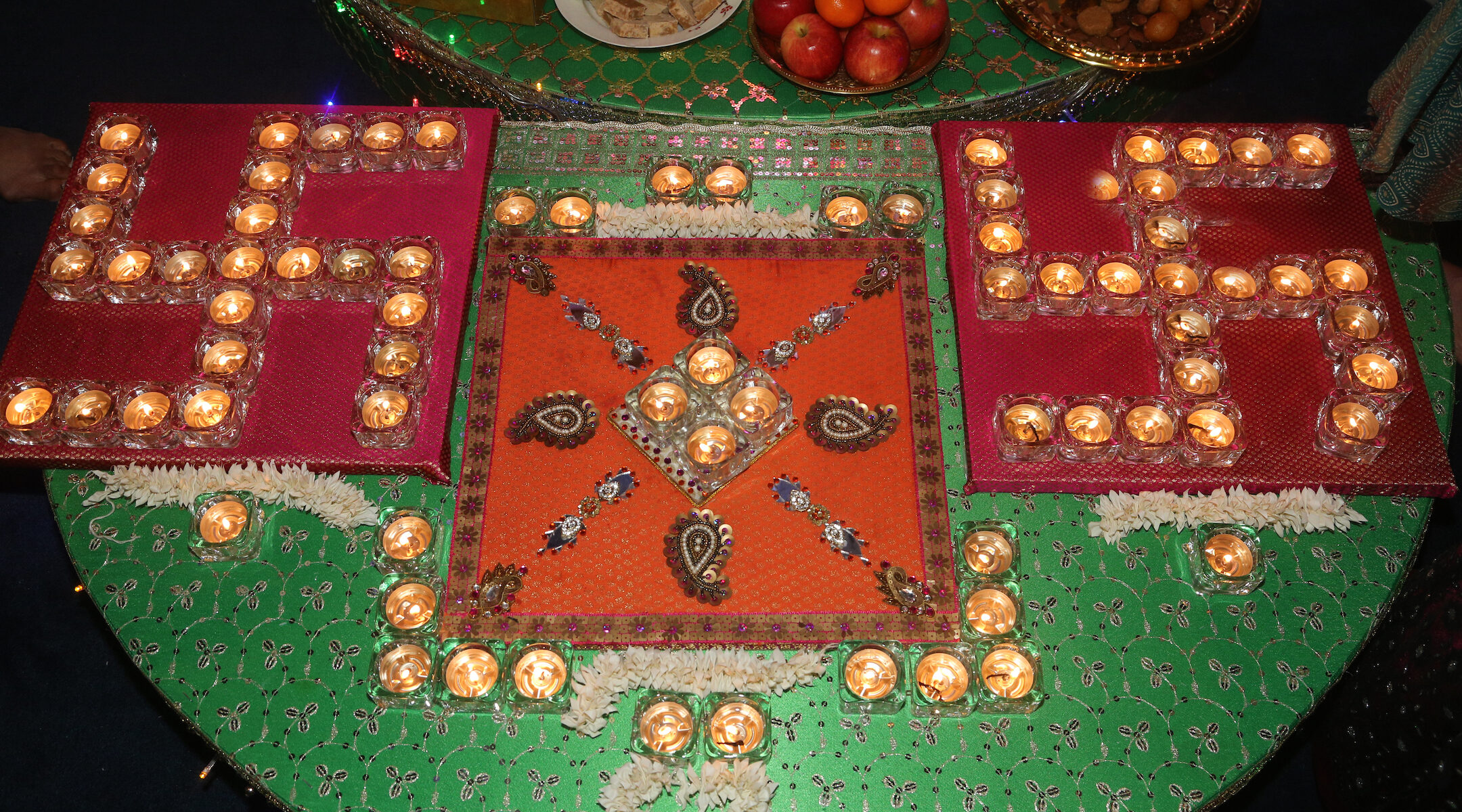 Diyas (lamps) in a swastika pattern by a shrine to the Goddess Lakshmi during the festival of Diwali at a Hindu temple in Toronto, Nov. 7, 2018. (Creative Touch Imaging Ltd./NurPhoto via Getty Images)
Advertisement

(J. The Jewish News of Northern California via JTA) — In what could be a first for an official piece of U.S. hate crimes legislation, California’s state Assembly has added language to a bill differentiating the Nazi swastika from the swastika symbol that has religious meaning for Hindu, Buddhist and Jain communities.

Rebecca Bauer-Kahan, a Democratic California Assembly member representing part of the Bay Area and a member of the California Legislative Jewish Caucus, worked with the Hindu American Foundation to add new language to a hate crimes bill she introduced with fellow state Assembly member Marc Levine earlier this year.

The bill, which was sent to the Senate after unanimously passing the Assembly last week, is expected to reach Gov. Gavin Newsom’s desk by the end of summer. It aims to change hate crime laws by standardizing the punishment for using various “terror symbols,” such as nooses and burning crosses — and swastikas. It would also expand the list of places where the law is applied to include public parks, school campuses, places of worship and cemeteries, among others.

Antisemitic groups such as the Goyim Defense League have distributed flyers with Nazi symbols and other hateful messages in California and other states in recent months.

The Nazi symbol, which most people picture when they think of a swastika, is actually called the Hakenkreuz. Adolf Hitler appropriated the image for his Aryan cause, flipping the direction of its lines and rotating it.

“This has been a misnomer that’s very entrenched, and it’s going to take a while to get past that,” said Samir Kalra, the foundation’s managing director. His group wants people to stop using the word “swastika” altogether when referencing Nazis, though he acknowledges that for Jews, there are decades of trauma connected to the symbol.

“I am pleased that we were able to create air-tight language that is sensitive to these important cultures while at the same time ensuring that those who seek to terrorize in anyway will be held responsible and prosecuted,” Bauer-Kahan told J. in an email.

“In traditional Hindu, Buddhist and Jain religions, the swastika has been regarded as a symbol of peace for thousands of years,” Bauer-Kahan said. “Unfortunately, we know all too well that Hitler and the Nazi regime stole this symbol and used it as a banner of hate, murder and destruction, and subsequently by Nazi supporters who seek to terrorize our community.”

Because hate crimes require the state to show that the accused person had the intent to “terrorize,” taking the Hindu swastika off the list won’t materially affect any future hate crime prosecution.

Still, the change in wording is a big deal, said Kalra. California is, as far as he knows, the first state to use clarifying language like this in legislation that affects criminal prosecution, although other states have made the same point in other contexts.

“This is a situation where we’re actually trying to correct the penal code,” Kalra said.

Earlier in May, the foundation wrote to Bauer-Kahan in support of her bill, while suggesting the language be amended.

Just displaying a swastika of any kind, without the intent to intimidate or terrorize, is not in itself prosecutable. But there have been numerous occasions in which Hindus, Buddhists or Jains have faced negative consequences when displaying a swastika, according to Kalra. During the holiday of Diwali, people make patterns using colored powder that often include swastikas. Some people hang swastikas at their front door for luck.

“Hindu residents in certain communities have to prove this is a peaceful symbol,” Kalra said. He believes this “can have a chilling effect on religious freedom.”

A version of this story was originally published in J. The Jewish News of Northern California, and is reprinted with permission.