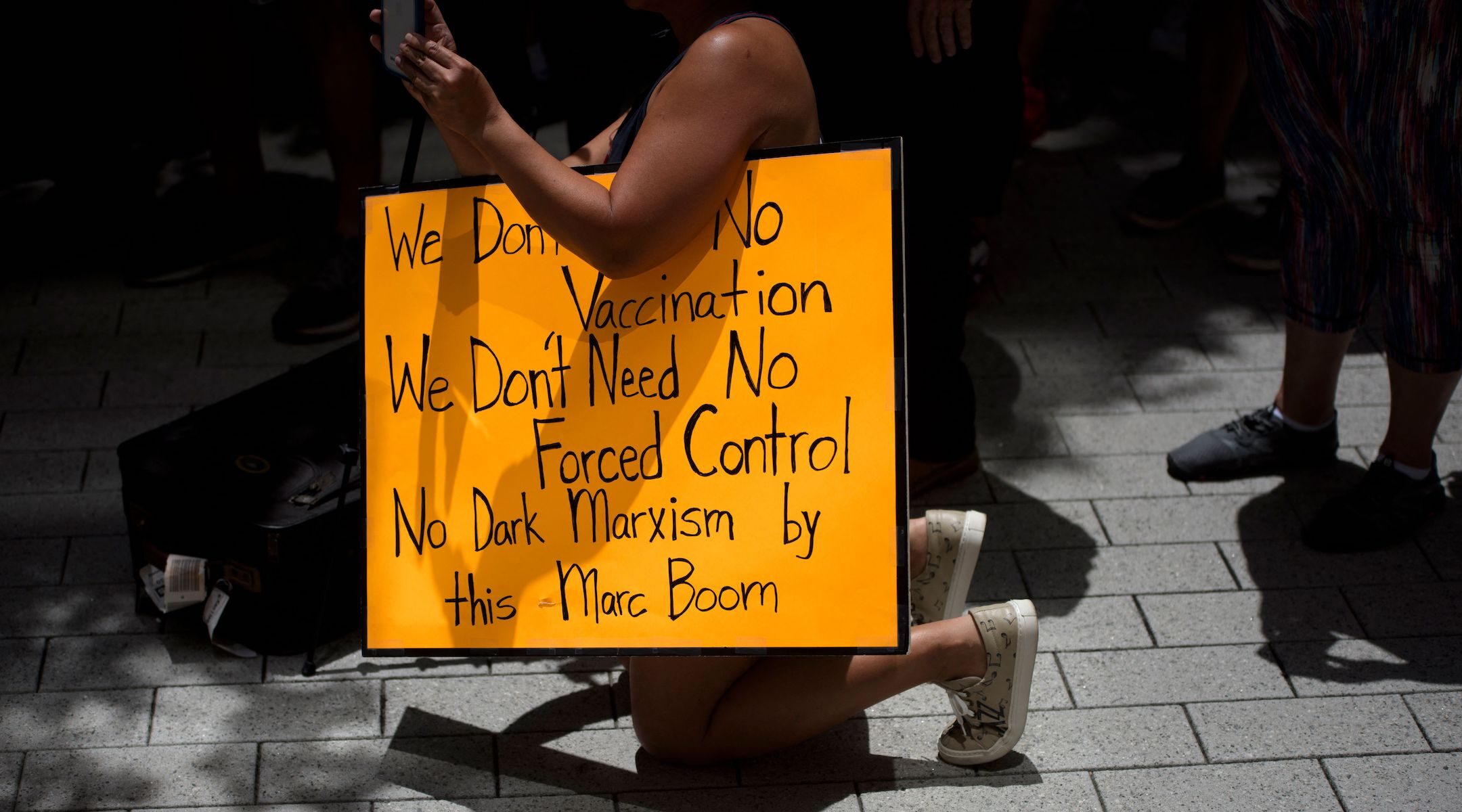 (JTA) — Members of a neo-Nazi group hung a banner from a bridge in Austin, Texas with the message “Vax the Jews” on Sunday.

The banner was put up by members of the Goyim Defense League, which has been behind other antisemitic banners hung in public places in California.

The Anti-Defamation League calls the group “a loose network of individuals connected by their virulent antisemitism.” The group’s name is a parody of the Anti-Defamation League, using the Yiddish word “goyim,” which means “non-Jews” and can have an insulting connotation. Photos on social media showed members of the group standing behind the banner making the Nazi salute.

Austin Mayor Steve Adler, who is Jewish, condemned the incident in a tweet. “I am heartbroken to see antisemitic hatred in Austin, a welcoming and respectful place. Hatred of any kind has no place in our city,” he wrote, linking to the ADL’s website form for reporting incidents of bias or antisemitism.

The banner was hung over the MoPac Expressway on the city’s west side, just a few blocks away from the Shalom Austin Jewish Community Center and several synagogues. The banner incident came just a few days after racist and antisemitic graffiti was discovered at Anderson High School, about a mile and a half away from the JCC.

In a letter to the Jewish community Sunday, the JCC said it was in touch with the police about the incident and warned that while the group might stage more demonstrations in the coming days, members of the Jewish community were advised not to engage with them. The letter said there did not appear to be a connection between the graffiti at the high school and the banner.

“The Austin Police Department is aware, has been incredibly supportive, and has been carefully monitoring and observing the situation,” the JCC leaders wrote.

A photo of a member of the hate group fist bumping an Austin Police officer also circulated on social media Sunday, prompting some to accuse the police department of harboring supporters of the antisemitic group. Joseph Chacon, chief of the Austin Police, responded to that accusation in a statement.

“A supervisor responded to the scene and got a protester to comply with his requests to ensure the scene remained safe. At the conclusion of the conversation, the responding supervisor declined a request for a handshake and instead opted for a fist-bump citing COVID-19 safety protocols. APD remains vigilant in its priority in keeping the Austin community safe and holding those who commit crimes accountable,” Chacon said.