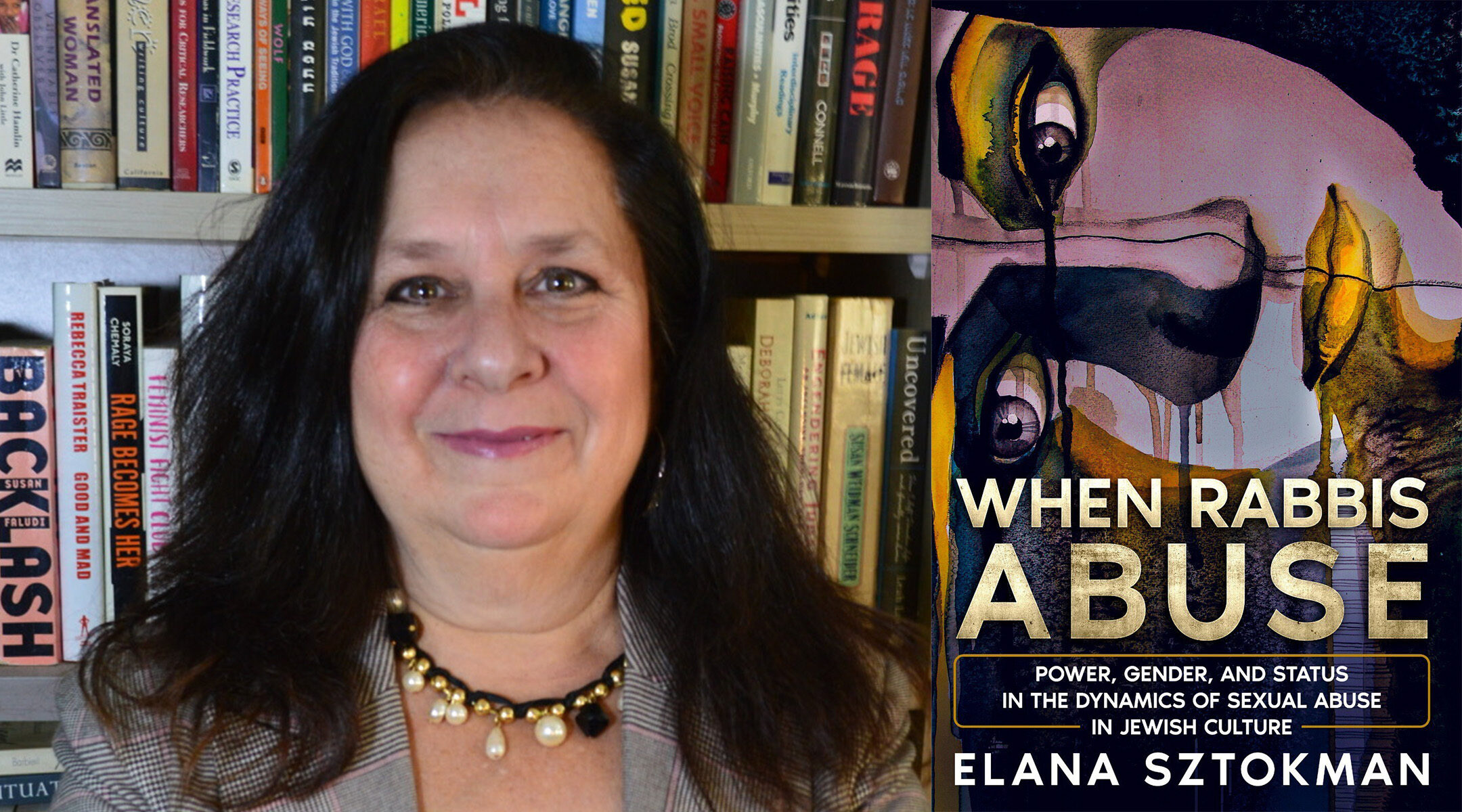 (JTA) – In the global reckoning with sexual abuse by powerful leaders, no religious movement has escaped scrutiny and censure, including the broad spectrum of Jewish denominations.

Major Reform and Conservative bodies have mounted investigations or issued detailed reports on abuse and cover-ups within their ranks. Lawsuits have been brought against longtime accused abusers such as Baruch Lanner and institutions such as the Orthodox Union for protecting them. The rabbi heading Germany’s largest Liberal Jewish group recently took a leave of absence following allegations he had ignored or covered up harassment allegations leveled at his husband. Orthodox leaders in Canada and Australia who sheltered in Israel for years to avoid being tried on multiple counts of child sex abuse have been arrested, and are now awaiting trial in their home countries.

Jewish anthropologist, educator and activist Elana Sztokman has been researching the specter of rabbinical abuse for years. Her new book “When Rabbis Abuse: Power, Gender, and Status in the Dynamics of Sexual Abuse in Jewish Culture” is an effort to peel back the curtain on abusive power dynamics across every denomination. She is publishing it through Lioness Press, a feminist imprint she founded.

“We have lots of communal studies of engagement and continuity and belonging and all kinds of stuff, but not a single one has ever examined the connection between experiences of abuse and people dropping out” of Judaism, Sztokman told the Jewish Telegraphic Agency. “And that’s a big, gaping hole.”

Sztokman, who received her master’s degree and PhD from the Hebrew University of Jerusalem, has twice won National Jewish Book Awards for her books exploring gender dynamics in Orthodox spaces. She also recently spoke up about alleged workplace abuse she experienced, by a former board chair of the Jewish Orthodox Feminist Alliance, where Sztokman formerly served as executive director.

While not a quantitative analysis, Sztokman’s book is informed by her interviews with 84 survivors of alleged abuse, and includes around 200 additional survivor testimonies gleaned through various Jewish archives. “When Rabbis Abuse” attempts to understand the manipulative personality type of abusive clergy, their methods and means of exploiting victims within Jewish spaces, and the ways in which their behavior is protected or excused by Jewish power structures.

Raised in the Orthodox movement, Sztokman no longer identifies with the denomination. She briefly enrolled in rabbinical school at the Reform-affiliated Hebrew Union College, but is no longer in the program; she now runs a new organization called the Jewish Feminist Academy. A Brooklyn native, Sztokman spoke to JTA about her new book from her home in Modiin, Israel.

JTA: You have been thinking and writing about abuse in Jewish spaces for a while. Tell me about your journey to decide to write a book entirely focused on abusive rabbis.

Sztokman: I didn’t plan to write a book about rabbis abusing. I really just wanted to dig a little deeper into what was really going on in the community. When the Barry Freundel story happened [a Modern Orthodox rabbi in Washington, D.C., Freundel was convicted in 2014 for secretly videotaping people in his synagogue’s mikvah and ultimately reached a $14.24 million settlement with his victims], that really struck a nerve with me and with a lot of people, because it was so many violations of a space that was meant to be sacred.

I went to a conference for Jewish leadership about a year before the scandal broke, where he was the featured speaker. It was all about issues around conversion, and he was featured as the macher. He promoted himself as controlling the entire discourse between the American and Israeli rabbinate around who gets to be a true convert. And then a year later it comes out that he was controlling all this because he liked access to converts, in order to be able to watch them naked. He had this whole system, telling them where they should stand and how they should stand, all for his personal arousal. This person had all this access and all this authority, with this roomful of people hanging on his every word.

It really illustrates how, when a rabbi is abusive, the abuse takes place in a location where a person’s religious and spiritual life is meant to be sacred. That’s really what pushed me to start talking to people. My book proposal, I wrote in 2015. That’s how long I’ve been working on this.

Were you surprised by how many rabbis have been accused of abuse, across every denomination and every conceivable Jewish space?

It was quite shocking. I shouldn’t say “surprised,” because the truth is that anyone paying attention to the news sees these stories all the time.

These are people we’re supposed to be able to trust, we give them our hearts, we give them our spirits, we give them our Jewish identity, and this is happening. In many cases, it’s very destructive to the relationship between Jews. Even though many people have rebuilt their relationships to Judaism, it doesn’t mean that they can recover. It takes a process. If the person who’s the gatekeeper for your Jewish spiritual practices is this narcissistic abuser, then that has impact.

You offer a character study of an abusive rabbi, or an abusive Jewish spiritual leader. How do you define this personality type, and why are they able to operate in those spaces?

The biggest takeaway was about charisma. We define leadership very closely to charisma. And we know that charisma is one of the signs of a narcissistic personality. Charisma is basically a person who can walk into a room and manipulate people. And the Jewish community tends to give a lot of awards to that person, to that personality.

The other point that came up very strongly is about pastoral care as an opportunity for preying, for targeting victims, and also the use of Jewish lingo to have an “in” with their targets. A whole bunch of abuse stories had rabbis talking about “teshuva” [forgiveness] and about “bashert” [soulmates]. A lot of abusers will find the spiritual openings that they’re looking for.

Are these simply narcissistic personality types who are just finding the ways to exploit the system they’re in, and that system happens to be Judaism? Or is there something about our current organizational Judaism that actually encourages this kind of behavior?

I’m reluctant to make that second point, even though it could be concluded from the research. My point is that a lot of people try to say, “Oh, Orthodox culture encourages abuse, because there are so many messed-up things about sexuality.” Or on the other hand, “Oh, look at Reform, it’s so permissive, look at how the girls are dressed,” that kind of stuff. Everybody’s always looking for the cultural hook, to say, “That’s what happens in that culture.” But “that” happens everywhere, and nobody’s immune. Abusers know how to manipulate whatever tools they have at their disposal, and they know how to be these chameleons that are able to use language that they know will speak to their targets.

Your book explores rabbis who commit both child sexual abuse and also adult relationship or power differential abuse, and you often talk about them interchangeably. Is it important to distinguish between these, or do you think they’re all under the same category of abuse?

Both of those attitudes strike me as misdirected, because these are very, very similar dynamics. It all has to do with control and it has to do with emotional manipulation. Who the target is may change from one abuser to another, but it doesn’t matter. It’s still damaging, and it’s still dynamics that we need to be recognizing and observing. These distinctions are, I think, not helpful. They’re not two different phenomena. It just comes down to the particular case of a particular abuser.

Just recently, Rabbi Shlomo Mund was arrested and charged with sexual abuse of minors in Montreal, dating back to 1997. The former day school principal Malka Leifer’s trial for child sexual abuse in Melbourne is scheduled for later this summer. Both cases involve charges more than a decade old, where the accused perpetrator was protected to some degree by their communal leadership, and evaded arrest for years by moving to Israel. What lessons can we draw here?

One is structural and one is cultural. Structurally, yes, communal structures protect abusers by placing them in another shul or another school or whatever. For all kinds of reasons. Because abusers often are people with power, so power protects power. It’s really hard to push back against, because you’re pushing back against networks of power.

The other level is cultural: whose lives are valued and which people do we see as worthy, which people we think of as deserving of our support. Someone who comes forward is seen as someone who’s a nobody, so we can dismiss them as a disgruntled employee. If they move to a new congregation, nobody’s crying. If the rabbi leaves, wow, that will be so damaging. But who cares about the victims? It’s a cultural dysfunction around whose lives are considered valuable.

How can, or should, Jewish institutions change their approach to thinking about rabbis in order to counter this kind of abuse?

We need to disconnect concepts of leadership from performance, versus actual kindness and empathy. Too often as a community we overemphasize performative things like charisma. But this is not a salient definition of leadership, or of the kind of person we should want to put on a pedestal. So culturally we need to change our definitions. Rabbinical schools should rethink some of the ways rabbis are trained, and hiring committees should also be rethinking what kinds of qualities we’re looking for.