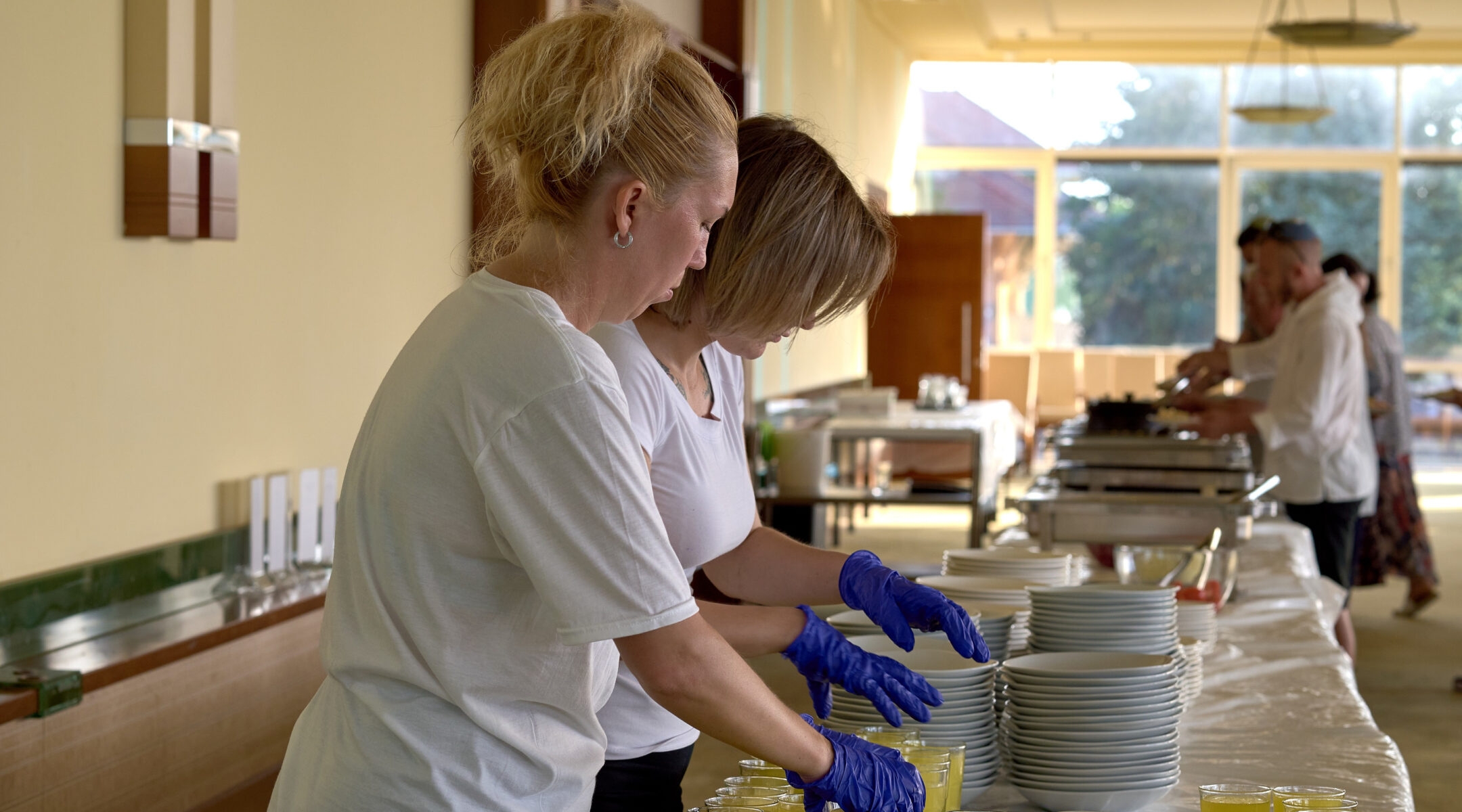 BUDAPEST (JTA) — For the last few months, a lakeside palace linked to a major political scandal in Hungary has been home to Jewish refugees from Ukraine.

Just before Passover, six weeks after Russia invaded Ukraine, the Hungarian government signed off on an effort to makes the palace in Balatonőszöd, a resort town on the the lakes of Lake Balaton some 80 miles away from Budapest, kosher for the holiday.

Now, the palace will be renovated to accommodate at least 664 people with a kosher kitchen able to feed hundreds more daily, according to a statement released Tuesday by the government and a Chabad-affiliated Jewish group that has been operating the space.

“During times like these we, the Jewish community of Hungary, consider it our special and sacred duty to reach out and offer whatever assistance is necessary to meet the existential and spiritual needs of our fellow Jews from across the border,” Rabbi Shlomó Köves, the head of the group, the EMIH federation of Jewish communities, said in the statement.

Köves told the Jewish Telegraphic Agency that several dozen people, including some Jewish community leaders from Ukraine, are already living on the palace grounds. But millions of Ukrainians have fled their country and millions more have become internally displaced persons within its borders since Russia invaded Feb. 24, and conflict is ongoing.

Among the displaced are thousands of Jews, some of whom have moved to Israel but others of whom remain in Europe in temporary accommodations. EMIH and the Federation of Jewish Communities of Ukraine hope that a Jewish refugee camp, which they call “Machne Chabad,” will add stability.

Feeding a full camp would cost about $600,000 a month, Köves said, adding that EMIH is raising funds to cover these costs.

The conversion of the site into a Chabad-affiliated refugee camp comes at a time when Chabad rabbis worldwide are trying to create new institutions to meet the Orthodox movement’s goal of creating 1,200 new schools, synagogues and programs to mark the 120th birthday of Rabbi Menachem Mendel Schneerson, the movement’s last leader.

It also comes as Orban’s attitude toward Jews remains hotly debated amid his growing influence on the global right. His vociferous campaign to defame George Soros, the Hungarian-Jewish billionaire who often features in right-wing conspiracy theories, has drawn charges of antisemitism, and his government has also been accused of promoting Holocaust revisionism. Orban has long rejected the allegations, and a recent study — commissioned by the European Jewish Association in Brussels, an organization founded by a Chabad-affiliated rabbi — concluded that while Hungary is home to high levels of antisemitic sentiment, it is one of the best countries in Europe for Jews to live.

For potentially hundreds of new Jewish immigrants, home might be soon in Balatonőszöd, the site of a pivotal moment on Orban’s rise to power. In 2006, it was at the Balatonőszöd palace where the prime minister at the time, speaking in an internal meeting, was recorded using vulgar language to allege corruption within his own party.

The release of the recording of Ferenc Gyurcsány triggered mass protests against his Hungarian Socialist Party and buoyed the opposition Fidesz right-wing party. The so-called Őszöd Speech is widely seen as one of the reasons why Fidesz achieved a landslide victory in the 2010 elections, making its leader, Viktor Orban, the prime minister of Hungary.

Following the speech, political parties and the government, which owns the Balatonőszöd palace, had little appetite for holding events there, leading to its disuse and fall into disrepair despite its prime location in a tourism-friendly region of Hungary.

The Jewish refugee camp, which is situated near an area favored by luxury summer camps for children from across Central Europe, will offer special activities for children and teenagers, freeing up parents to rebuild their lives in Hungary, plan their return to Ukraine or prepare their immigration to a third country, Köves said.