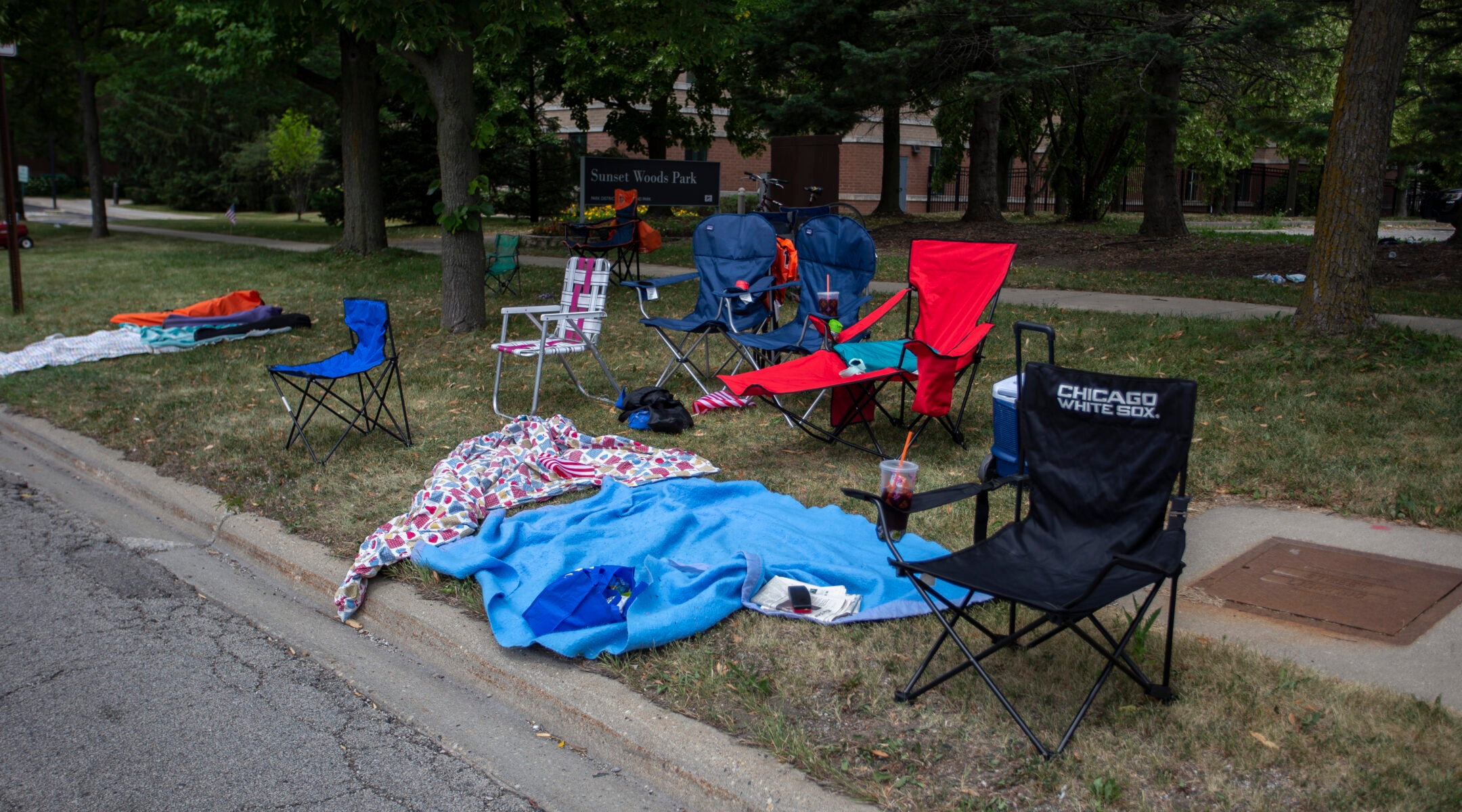 Chairs and blankets are left abandoned after a shooting at a Fourth of July parade on July 4, 2022 in Highland Park, Illinois. (Jim Vondruska/Getty Images)
Advertisement

(JTA) — A klezmer band was playing when a shooting interrupted a Fourth of July parade in a suburb of Chicago Monday, killing at least six people and sending dozens more to local hospitals.

A congregant and staff member of a local synagogue was among those murdered, the synagogue announced Monday night.

The mass shooting in Highland Park, Illinois, one of the most heavily Jewish suburbs in the Chicago area, is at least the 300th in the United States this year. Eight hours after the shooting, law enforcement authorities said they had arrested a person of interest, a 21-year-old Highland Park native named Robert “Bobby” Crimo who they believed had fired from the roof of a building overlooking the parade route.

The authorities said five people, all adults, died at the scene and one died at an area hospital, and hospital officials said they had treated children among the injured.

“There is information about Jewish casualties,” Israel’s Ministry of Foreign Affairs told its staff, adding that its Chicago-based consul general, Yinam Cohen, was in touch with both authorities and local Jewish communities.

At least a third of the 30,000 residents in the suburb along Lake Michigan about 25 miles north of Chicago are Jewish, according to some estimates, and they include many Israelis.

A Chicago area law enforcement source confirmed to the Jewish Telegraphic agency that Jews were among the casualties, although how many or their condition is not known. The source said law enforcement was not yet speculating about motive.

On Monday night, North Shore Congregation Israel in neighboring Glencoe announced that a congregant who also worked on the synagogue’s staff was among the victims. Jacki Sundheim was the Reform synagogue’s events and b’nei mitzvah coordinator, according to its website. Earlier in the day, synagogue leaders had posted a message about the shooting, saying, “This touches each of us deeply and personally; the grief, pain, and fear affect us all.”

Reports from Jewish attendees and town residents began emerging shortly after the shooting, even as the area remained under lockdown while authorities searched for the shooter.

Jeff Leon, a Jewish lawyer whose twin 14-year-old sons were marching in the parade with the high school football team, described scrambling behind cars to shield himself from bullets and said he had passed someone who was bleeding from the head. He speculated that the attack was antisemitic in nature.

“Probably half the people who live in Highland Park are Jewish,” Leon said. “And that just can’t be a coincidence.”

An Indiana-based Chabad rabbi said on Twitter that his teenaged son had been less than a block from the shooting helping Jewish attendees don tefillin, phylacteries used in prayer, when the shooting began. “He just called to say that he’s safe, BH,” Eleazar Zalmanov posted, using an abbreviation that means “thank God.”

Highland Park’s annual Independence Day parade attracts many families to the suburb’s compact downtown. It was preceded by a children’s and pet parade and would have been followed by a festival featuring carnival games, live music and fireworks, according to the town’s website.

Tomer Mizrahi had anticipated a hectic day at Mizrahi Grill, the kosher restaurant that he and his brother, Eli, opened in Highland Park a decade ago. Instead, he spent most of the workday with his staff behind closed doors, gleaning details off of news outlets and WhatsApp groups on the deadly shooting that happened about two miles from the restaurant.

“The streets are empty, everybody’s staying inside. I guess it’s because the shooter’s still at large,” said Mizrahi, who has been living in the United States since 2000 and in Highland Park since 2012. At around 2 p.m. his time, Mizrahi and the staff were packing up and getting ready to leave.

As citizen of Israel who has lived in that country during terrorist attacks, the atmosphere on the street in Highland Park right now “is not particularly scary. But it’s very unpleasant. We used to think this was a safe place. And that feeling of safety is now gone,” Mizrahi said.

“What happens in one neighborhood affects our entire community,” the Jewish United Fund of Chicago, the city’s federation, posted on Instagram, adding that it “stands ready” to deliver support to those in need in the wake of the shooting.

The Highland Park shooting comes less than two months after a pair of deadly mass shootings that stood out even among the constant toll of shooting deaths in the United States. On May 14, a shooter who said he was motivated by antisemitic and racist ideologies killed 10 Black people in a Buffalo, New York, supermarket. Ten days later, an 18-year-old man murdered 19 students and two teachers at an elementary school in Uvalde, Texas.