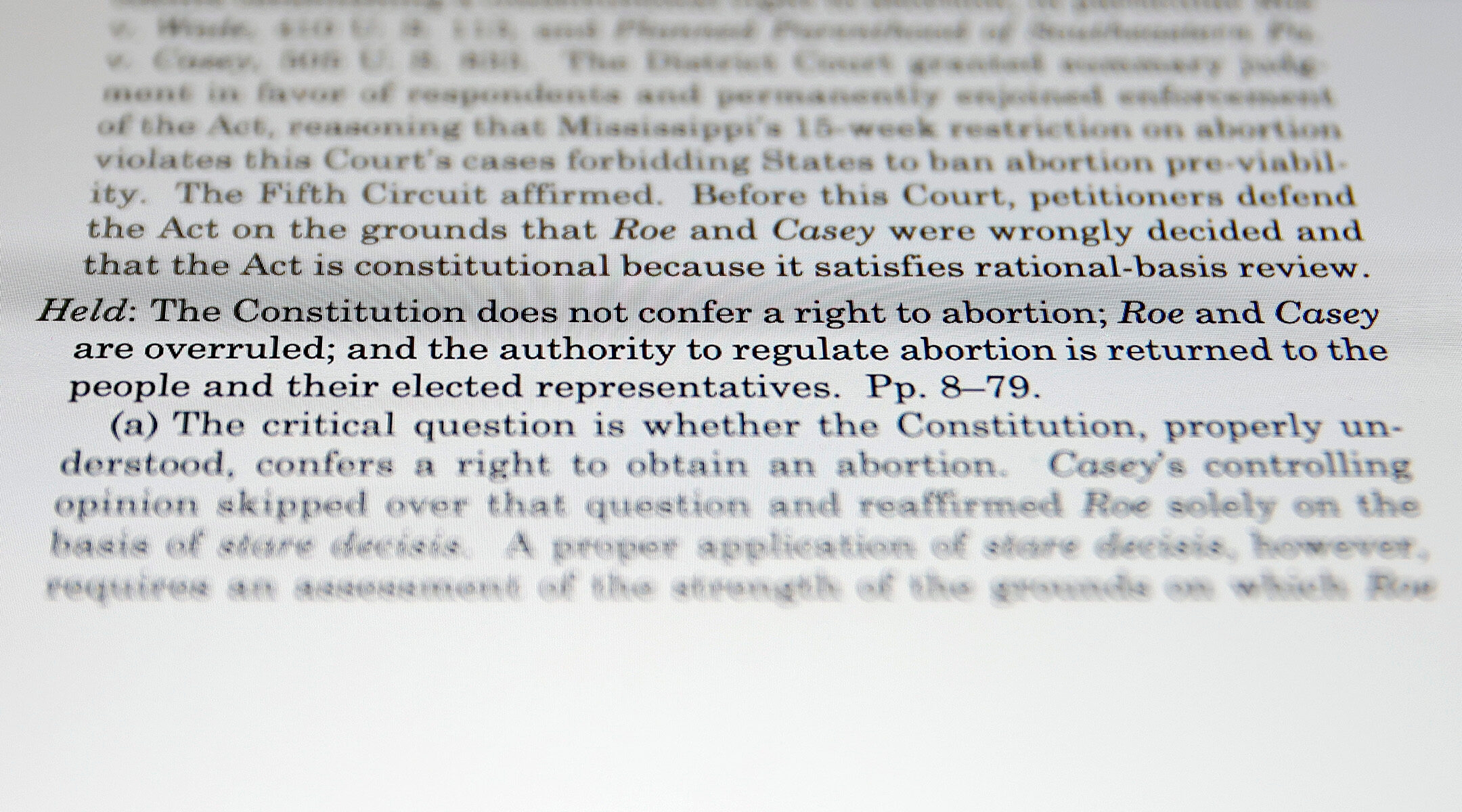 (JTA) — Agudath Israel of America, the national Orthodox Jewish organization for which I work, welcomed the U.S. Supreme Court’s reversal of Roe v. Wade. Predictably, we were immediately cast into an “enemy” or “ally” box, depending on who was doing the casting.

The first group assumed that we don’t care about women; the second, that we were embracing the Christian evangelical agenda.

Neither is remotely the case. We care about Judaism and embrace only it.

From a Jewish perspective, to be sure, the contention that there can be entirely proper reasons for a woman to seek an abortion is not arguable.

There are cases in which, according to Jewish tradition, the option of abortion needs to be available — such as when a pregnancy’s progression threatens the life of the potential mother. Moreover, in cases where a fetus has genetic abnormalities or will face a fatal disease after birth, there are Jewish decisors who would sanction abortion, at least up to a point.

Nor can anyone claim that American women, including Jewish ones, haven’t suffered, or even died, as a result of pre-Roe abortion restrictions. The stories are many, and they are rightly wrenching.

But no one can claim, at least not with the support of facts, that the Jewish religious tradition considers abortion to be a mere matter of a woman’s (or, for that matter, a man’s) personal choice, the abiding mantra of so many Americans today. The most common reasons — in 92% of cases, according to a 2004 Guttmacher Institute study — that women give for having an abortion have to do with economic, timing or partner-related concerns.

While such motivations may be endorsed by many Americans as worthy, legitimate reasons to opt for abortion, Judaism rejects them as entirely inappropriate factors to be weighted in a decision of such gravity as the decision to end a developing life.

Abortion is a topic dealt with in detail by a wealth of both time-honored and contemporary Jewish religious law responsa. While various Jewish legal opinions may take different approaches to the nature of the issue, the decisors of Jewish law who guide us indisputably hold that, absent extraordinary circumstances, terminating a pregnancy is a grave sin.

And so, the fact that a number of Jewish groups have wholeheartedly joined the “woman’s choice” chorus, no less in the name of Judaism, compelled us to speak up, if only to clear the Jewish record.

However, because of the exceptions, rare though they blessedly are, that allow abortions under certain circumstances, Agudath Israel of America has never supported, and cannot support, any state legislation that would outlaw abortion unqualifiedly or give a fetus the status of a “person.” Abortion-limiting laws must preserve a right to terminate a pregnancy in cases like those mentioned above, both as a matter of constitutional free exercise of religion and of moral principle.

But the bottom line for us is Jewish religious law’s indisputable judgment about fetal life: It is entitled to our protection. And no one should be allowed to misrepresent as a “Jewish view” anything other than that well-established truth.

Now, of course, there is no reason that American law need reflect Jewish values. But even without looking to Judaism for guidance, a civil society, through its laws, should want to promote a social ethic that affirms the supreme value of life. Allowing abortion at will does the opposite. It behooves Jews and non-Jews alike to be deeply concerned by the millions of potential lives — Jewish and non-Jewish alike — yearly snuffed out because fetuses were not protected.

RELATED: Overturning Roe would be an unconscionable infringement on the religious freedom of Orthodox Jews

In this post-Roe world, citizens in each state are charged with, through their elected officials, crafting laws to govern abortion. Our goal as Jews should be to promote laws that treat developing life with reverence, even while accommodating the protection of women’s lives according to our religious concerns.

The ready availability of safe at-home abortifacients that can be mailed across state lines, and the ability of women to travel, at no expense, due to various groups’ offers, to other states where abortion is unfettered, would allow women to undergo an abortion in the rare circumstances sanctioned by Jewish law. Nevertheless, outlawing abortion without allowing for exceptions, including sincere religious convictions, is unacceptable — arguably, unconstitutional.

And so, in the end, some of the laws that the “pro-choice” movement will oppose will be opposed as well by observant Orthodox Jews.

Not, though, because we embrace the idea of abortion as a choice to be made by anyone for any reason. But, rather, because of what our faith requires of us.

What it also requires, however, is that we — and all people — do all we can to greatly decrease the number of developing lives that some would, without the requisite contemplation, destroy. To embrace, in other words, a culture that celebrates life.